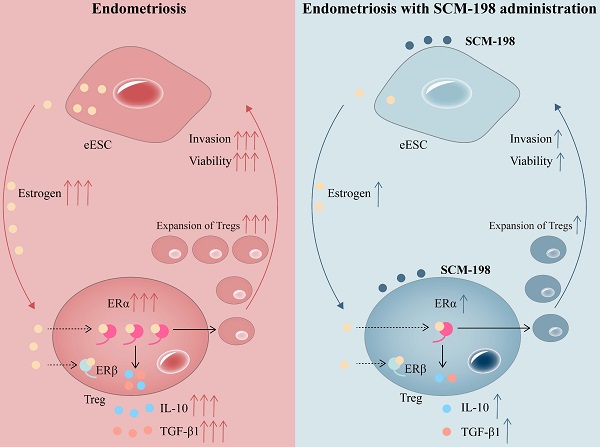 Background: Endometriosis (EMS), a typical endocrine immune disorder, associates with dramatically increased estrogen production and disorganized immune response in ectopic focus. Peritoneal regulatory T cells (Tregs) expansion in women with EMS and their pathogenic role attributable to endometriotic immunotolerance has been reported. Whether local high estrogen promotes EMS by discipling Tregs needs to be further explored. Up to date, there is no effective medicine for the treatment of EMS. SCM-198 is a synthetic leonurine with multiple physiological activities. Whether SCM-198 could regulate Tregs via estrogen and facilitate the radical cure of EMS has not yet been reported.

Methods: Proportion of Tregs in peritoneal fluid of patients with EMS was firstly analyzed via flow cytometry. Peritoneal estrogen concentration and the mRNA levels of estrogen receptor α (ERα) and estrogen receptor β (ERβ) of Tregs were detected by ELISA and RT-PCR, respectively. Grouped in vitro induction assays were performed to explore the effects of SCM-198 and estrogen signaling on Tregs. Cell invasion and viability assays were utilized to detect the crosstalk between Tregs and ectopic endometrial stromal cells (eESCs), with or without SCM-198 treatment. Furthermore, EMS mice models were established to verify the therapeutic effects of SCM-198.

Results: Increased Tregs were found in peritoneal fluid of EMS patients, accompanied with estrogen-ERα overactivation. Estrogen-ERα triggered the expansion of Tregs and their cytokine production (IL-10 and TGF-β1), which could be reversed by SCM-198 treatment. Moreover, SCM-198 abated the invasion and viability of eESCs enhanced by Tregs. In vivo experiments confirmed that SCM-198 obviously retarded the growth of ectopic lesions and downregulated the functions of Tregs via estrogen-ERα inactivation.

Conclusions: These data suggest that SCM-198 attenuates Tregs expansion via the inhibition of estrogen-ERα signaling in EMS and offer a promising therapy for such a refractory disease.