Letter To The Editor

Does WAVE1 contain a GoLoco/GPR motif?

Heterotrimeric G-protein alpha subunits (Gα) are molecular switches regulated by the binding and hydrolysis of guanosine 5-triphosphate [1]. Non-receptor proteins that modulate the nucleotide binding and hydrolysis activities of Gα proteins have recently become of considerable interest [2, 3]. One class of Gα modulating proteins is defined by the presence of a GoLoco motif(s) in their primary sequence [4]. The GoLoco motif was discovered as a region of sequence homology within novel Gα-binding proteins [5-7], and is also referred to as the G-protein regulatory (GPR) motif [5]. The GoLoco motif is a peptide of 20-40 amino acids that binds Gαi/o•GDP and prevents the spontaneous release of GDP by Gα, thus acting as a guanine nucleotide dissociation inhibitor (GDI) (reviewed in [4]).

Song et al., recently described the presence of a GoLoco/GPR motif in the actin polymerization regulating protein WAVE1 [8]. A synthetic peptide corresponding to this putative WAVE1 GoLoco motif was found to have GDI activity for Gαi1,2,3 in vitro. Furthermore, in coimmunoprecipitation experiments full length WAVE1 was found to interact with Gαi3•GDP but not Gαi3•GTPγS in both COS-7 cell lysates and rat brain extracts [8].

Primary sequence analysis of WAVE1 (a.k.a. SCAR1) indicates that, in many ways, does conform to the GoLoco motif consensus sequence (Fig. 2A). WAVE1 contains a predicted alpha helical region that is terminated by a glutamine residue. Subsequently a [R]-[K]-[aliphatic]-[DE]-[DE]-[Q]-[R] motif characteristic of many GoLoco motifs is present. However, upon further analysis of the primary sequence of WAVE1 it can be observed that the predicted GoLoco/GPR motif overlaps the WASP homology 2 (WH2) domain (Fig. 2B) [8]. The C-terminal domain architecture consisting of a WH2-domain, central domain, and acidic domain (also referred to as the VCA region) is characteristic of proteins such as WAVE1-3, WASP, and N-WASP that stimulate Arp2/3-dependent actin nucleation [10]. The WH2 and central regions interact with actin monomers [11, 12] whereas Arp2/3 binds to the central and acidic domains of WAVE/WASP proteins [13] (binding sites are illustrated in Fig 2C). The structure and function of the WH2-central-acidic cassette in actin nucleating proteins is highly conserved throughout evolution [14].

As the WH2 domain of WAVE1 directly overlies the predicted GoLoco/GPR motif described by Song et al. [8] (Fig 2B, C), logic states that WAVE1 can either contain a WH2 domain or a GoLoco motif but not both. Available biochemical and structural evidence strongly suggests that WAVE1 contains a functional WH2 domain that binds actin monomers with low micromolar affinity, or with nanomolar affinity in the context of an extended WH2 domain containing the central region [12]. Given that WAVE1, 2 and 3 contain the only WH2 domains similar in sequence to GoLoco/GPR motifs, it must be considered highly unlikely that WAVE1 contains a bona fide GoLoco/GPR motif. A simple explanation is that WAVE1 contains a WH2 domain with fortuitous sequence similarity to GoLoco/GPR motifs. That is not to say that the WAVE1/Gαi interactions observed by Song et al. [8] should not be considered important. One could consider this intriguing dual usage of a WH2 domain as a possible case of convergent evolution. In terms of the known structural biology of WH2/actin and Gα/GoLoco complexes this is not out of the question. Both the WH2 domain and GoLoco motif are likely in a unstructured conformation when unbound to ligand [11, 15, 16]; thus it is possible that Gαi and actin could compete for WH2 domain binding. It is worth noting, however, that despite high levels of sequence identity between the three human WAVE isoform WH2 domains (Fig. 1C) only WAVE1 but not WAVE2 nor WAVE3 were found to have GDI activity on Gαi subunits (the signature biochemical activity of a GoLoco/GPR motif). This therefore argues against a conserved role for WH2 domains in heterotrimeric G-protein regulation, in general. 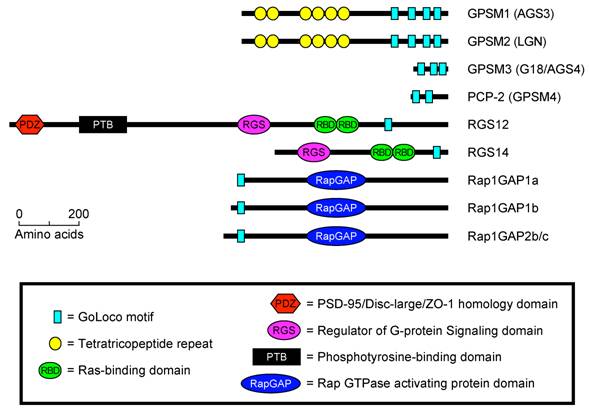