Histopathological effects of cisplatin, doxorubicin and 5-flurouracil (5-FU) on the liver of male albino rats

Cisplatin, doxorubicin and fluorouracil (5-FU), drugs belonging to different chemical classes, have been extensively used for chemotherapy of various cancers. Despite extensive investigations into their hepatotoxicity, there is very limited information on their effects on the structure and ultra-structure of liver cells in vivo. Here, we demonstrate for the first time, the effects of these three anticancer drugs on rat liver toxicity using both light and electron microscopy. Light microscopic observations revealed that higher doses of cisplatin and doxorubicin caused massive hepatotoxicity compared to 5-FU treatment, including dissolution of hepatic cords, focal inflammation and necrotic tissues. Interestingly, low doses also exhibited abnormal changes, including periportal fibrosis, degeneration of hepatic cords and increased apoptosis. These changes were confirmed at ultrastructural level, including vesiculated rough endoplasmic reticulum and atrophied mitochondria with ill-differentiated cisternae, dense collection of macrophages and lymphocytes as well as fibrocytes with collagenous fibrils manifesting early sign of fibrosis, especially in response to cisplatin and doxorubicin -treatment. Our results provide in vivo evidence, at ultrastructural level, of direct hepatotoxicity caused by cisplatin, doxorubicin and 5-FU at both light and electron microscopi. These results can guide the design of appropriate treatment regimen to reduce the hepatotoxic effects of these anticancer drugs.

Chemotherapy involves the use of chemical agents to stop the growth and eliminate cancer cells even at distant sites from the origin of primary tumor. However, it does not distinguish between a cancer and normal cells, and eliminates not only the fast-growing cancer cells but also other fast-growing cells in the body, including, hair and blood cells. More than half of all people diagnosed with cancer receive chemotherapy regimen, that usually include drugs to treat cancer as well as drugs to help support the completion of the cancer treatment at the full dose on schedule (1, 2).

Cisplatin, doxorubicin and 5-FU have been extensively used for chemotherapy of various cancers, including that of the liver (3-5). However, while they generate acceptable outcome in chemotherapy of some cancers, they also exhibit severe toxicity and undesirable side effects (6-8). Extensive investigations have been conducted on the hepatotoxicity as well as general organ toxicity of these three anticancer drugs (9-10). These include light and electron microscopic studies of various organs and biochemical studies of liver enzymes (11-14). However, there is very limited information on the effects of these drugs on histopathology and ultrastructure of liver cells. Further, a variety of agents including anti-oxidants have been shown to attenuate the hepatotoxicity of these three compounds (15-17). Also, analogues of these compounds have been synthesized and shown to be much less toxic (18).

In the present study, we investigated the effects of Cisplatin, doxorubicin and 5-FU belonging to different chemical classes on rat liver toxicity. We showed that the drugs induced drastic abnormalities with respect to body and liver weight changes as well as the histology and the ultrastructure of liver tissue. We further identified pathological features at both structural and ultrastructural levels, which could be used to adjust the dose and duration of treatment.

At the end of treatment both control and experimental rats were euthanized using carbon dioxide. The livers were collected from all the groups, fixed in 10% formalin in saline, dehydrated in ascending grades of ethyl alcohol, cleared in xylol and mounted in molten paraplast at 58-62ºC. Five micron sections were obtained, stained with Harris Hematoxylin & Eosin and evaluated for any structural changes under a bright field microscope.

Liver tissue from both control and treated groups were immediately fixed in 2.5% glutaraldehyde and 2% paraformaldehyde in 0.1 M cacodylate buffer (pH 7.4). After rinsing in 0.1 M cacodylate buffer, samples were post fixed in a buffered solution of 1% osmium tetroxide at 4°C for 1.5 hour. This was followed by dehydration in ascending grades of ethyl alcohol (30%, 50%, 70%, 90%, and absolute) and embedded in epoxy-resin. Ultrathin sections were obtained with a diamond knife on a LKB microtome and mounted on formvar-coated grids, stained with uranyl acetate and lead citrate and evaluated for structural abnormalities with a Joel Transmission electron microscope.

Means and standard deviations were calculated from the five replicates per each group. Student's t-test was performed and the differences were considered significant when P < 0.05.

Body weights were measured twice weekly at 1, 4, 8, 12, 16 and 20 days post-treatment. The results demonstrate that treatments with both low and therapeutic (Fig. 1) doses of cisplatin, doxorubicin and 5-FU caused inhibition in the percentage of weight gain as compared to controls, indicating retardation in growth. 5-FU treatment exhibited the least adverse effects (Fig. 1). The results of low doses were quite similar to those of therapeutic treatment doses. 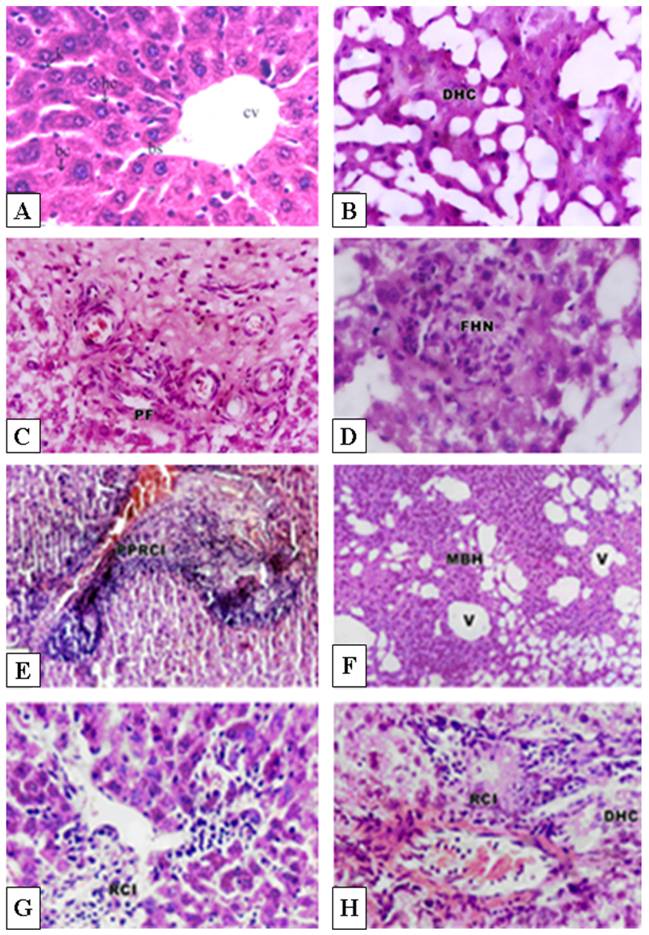 Control hepatocytes were normal polygonal with oval-shaped nuclei, cytoplasm crowded with organelles, particularly rough endoplasmic reticulum, smooth endoplasmic reticulum, golgi apparatus, ribosomes, mitochondria and glycogen particles (Figs. 3A and 3B). In contrast, the hepatocytes of liver from group treated with cisplatin showed pyknotic nuclei with irregular nuclear membrane, the cytoplasm contained vesiculated rough endoplasmic reticulum and atrophied mitochondria with ill-differentiated cisternae (Figs. 3C-F). The hepatic tissue showed numerous spots of densely collected inflammatory cells composed mainly of macrophages and lymphocytes at the center and a number of fibrocytes at the periphery; the collagenous fibrils appeared markedly distributed in the necrotic foci (Figs. 3C-F). Doxorubicin (Figs. 4A and 4B) and 5-FU (Figs. 4C and 4D) treatments revealed similar cytological alterations as in cisplatin treatment. 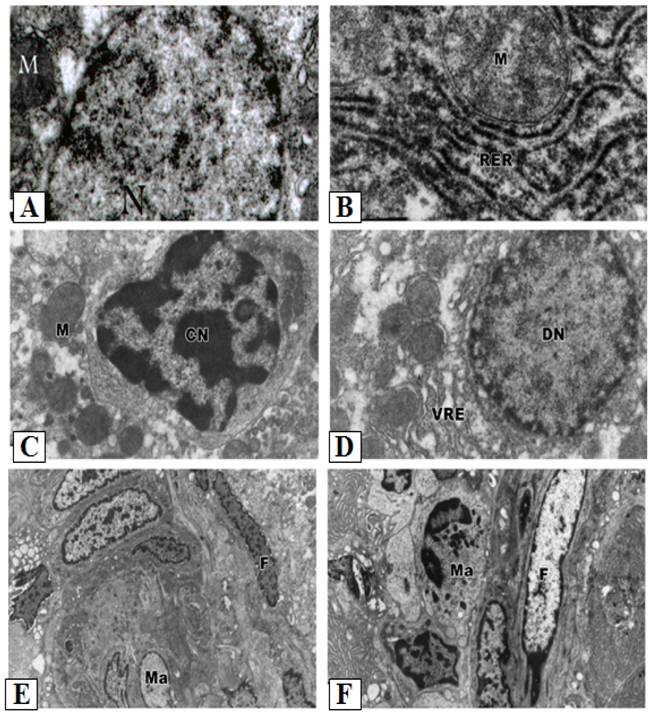 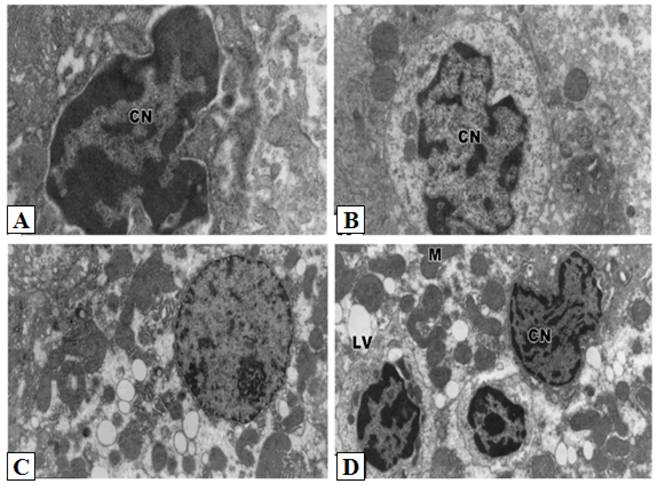 Although a number of studies have demonstrated some side-effects of the chemotherapeutic drugs cisplatin, doxorubicin and 5-FU, the present study is the first comprehensive in vivo study revealing drastic abnormalities of these drugs both at cellular and ultrastructural levels. Rats treated with the anticancer drugs showed a significant decrease in body weight gain, suggesting that hepatotoxicity might have contributed to this loss as previously reported (19). Dissection of these animals indicated that the loss of the body weights were due to loss of skeletal muscles and adipose tissue as previously suggested by Devlin et al (20). Moreover, the reduction in body weight of the animals in this study correlate with the decreased food intake observed during the experimental period.

The present investigation showed many histopathological and ultrastructural abnormalities in the liver including inflammatory infiltration, hyperplasia, periportal fibrosis, marked disruption of hepatic cords and dilated blood sinusoids. Many hepatocytes showed karyomegaly and pyknotic nuclei indicating apoptosis. The liver is known to accumulate significant amounts of cisplatin, second only to the kidney (21), thus hepatotoxicity can be associated with cisplatin treatment (22). Clinical evidence of cisplatin-induced liver injury has been demonstrated by elevated activities of serum enzymes and bilirubin levels, and the development of jaundice (23). Cell death can result from naturally occurring apoptosis (physiological apoptosis) or from irreparable cell injury (pathological apoptosis) as described by Farber (1994) (24). Apoptosis is a common feature of hepatotoxicity induced by many chemicals; it may precede necrosis, as in the hepatotoxicity induced by thioacetamide (25), or it may occur concurrently with necrosis as in hepatotoxicity associated with acetaminophen (26). Cisplatin is thought to kill cells primarily by forming DNA adducts, causing G2 arrest in the cell cycle, triggering apoptosis (27).

Doxorubicin is firmly established as a major therapeutic agent in the treatment of a wide variety of tumors. Although the precise mode of antitumor action of this drug is not well established, it is thought to involve the interference with the synthesis of macromolecules, covalent DNA binding and DNA cross-linking, inhibition of topoisomerase II, arrest of tumor cell cycle progression in G2 phase, induction of apoptosis and generation of reactive oxygen radicals (28). Two of the listed phenomena require enzymatic activation, including covalent modification of macromolecules and redox cycling with reactive oxygen species and both these effects can cause cytotoxicity (29). A number of studies indicate that enzyme activation of doxorubicin begins with the drug conversion to a semiquinone free radical via one-electron reduction, and such a reaction is catalyzed by several enzymes, including P-450 reductase (30). In the present study inflammatory cells forming granulomatous lesions and periportal fibrosis were detected after doxorubicin administration. Doxorubicin has been shown to induce accumulation of inflammatory cells (31), associated with increased activities of tissue aminotransferases, LDH and ALP, indicating hepatic damage (32).

5-fluorouracil has been used in the treatment of breast cancer, head and neck cancer, and gastrointestinal cancers. When given intravenously, it is metabolized in tissues to its active form, 5-fluoro-deoxyuridine-monophosphate, which inhibits thymidylate synthase. The drug is also catabolized primarily in the liver, as dihydrouracil, and the reduced compound is then cleaved to α-fluoro-β-alanine, ammonia, urea, and carbon dioxide. Both the toxicity and antitumor effect are potentiated if the catabolism is blocked by inhibiting dihydrouracil dehydrogenase. Although the liver plays a key role in its catabolism, 5-FU has not been reported to cause liver damage when given orally, and few reports have indicated its hepatotoxicity when given intravenously (33). Our study showed many histopathological and ultrastructural abnormalities in the liver after intraperitoneal administration of 5-FU including apoptotic cell death, appearance of numerous areas of inflammatory cells, and the cytoplasmic organelles were markedly affected with collagenous fibrils in a number of necrotic cells. 5-FU was found to produce liver toxicity associated with a number of abnormalities (34).

In conclusion chemotherapeutic agents such as cisplatin, doxorubicin, and 5-FU cause direct hepatic toxicity. Appropriate protective measures must be applied with anticancer treatment for improving liver function. Our results provide in vivo evidence, at light microscopic and ultrastructural levels, of direct chemotherapeutic hepatotoxicity caused by cisplatin, doxorubicin and 5-FU. Furthermore, this study identified pathological features at both structural and ultrastructural levels, which could be used as the basis for determining the appropriate dose of these drugs to reduce their hepatotoxic effects.

6. Ajani JA. Optimizing docetaxel chemotherapy in patients with cancer of the gastric and gastroesophageal junction: evolution of the docetaxel, cisplatin, and 5-fluorouracil regimen. Cancer. 2008;113:945-55

10. Kim S.H, Hong K.O, Chung W, Hwang J.K & Park K. Abrogation of cisplatin-induced hepatotoxicity in mice by xanthorrhizol is related to its effect on the regulation of gene transcription. Toxicology and Applied Pharmacology. 2004;196:346-355

30. Bartoszek A. Metabolic activation of adriamycin by NADPH-cytochrome P450 reductase; overview of its biological and biochemical effects. Acta Biochim Pol. 2002;49:323-31