A recent report postulated that the mast cell population is a significant reservoir for persistent HIV infection. Our study attempted to validate this hypothesis by quantitatively comparing the distribution of mast cells and cells expressing the HIV protein p24 in HIV infected patients. Consecutive sections of paraffin-embedded human tissues from various tissue sites were subjected to immunohistochemistry with monoclonal antibodies to mast cell tryptase, viral protein p24, and other molecules. The sub-cellular distribution of these molecules was examined, to determine whether immunoreactivities to these molecules would be co-localized within the same cells. Our study revealed that, in two immediate adjacent sections immunostained for mast cell tryptase and p24, respectively, all or nearly all tryptase and p24 expressing cells were distributed at different areas. In the single section double immunostained for mast cell tryptase and p24, 5 (1.1%) of 460 large p24 expressing cell clusters encountered showed a single or few mast cells within or adjacent to p24 expressing cell clusters, but no distinct co-localization of these two proteins was observed. Similarly, no distinct co-localization was observed in any of over 500 isolated individual mast cells and p24 expressing cells. In contrast, macrophages were consistently intermixed with or adjacent to p24 expressing cells, and p24 immunostaining were seen in the cytoplasm of a subset of macrophages. These findings suggest that tissue mast cells do not show evidence for active virus replication by the techniques employed.

It is a commonly held belief that persistent HIV infection is maintained by a subset of latently infected, long-lived T and non-T cell populations [1-2]. Potential sanctuaries for the persistent HIV infection include natural killer cells, astrocytes, microglia, B cells, dendritic cells, macrophages, and memory T cells [3-7]. Macrophages and memory T cells are more commonly considered as the most significant stable reservoirs for persistent HIV infection because of their longevity, wide distribution, and the ability to harbor replication-components of the virus [3-7]. Unfortunately, there is neither an established method to quantify the number of latently infected cells in HIV patients, nor is there a highly representative in vitro model that could be used to quantitatively monitor the entire process of HIV infection [8]. In addition, most studies have been preferentially focused on peripheral blood, tissue cultures and animal models, and have not looked at H&E stained sections of organs from patients with HIV. Thus, the dynamics of HIV infection and the extent of contributions of each HIV reservoir to development and progression of HIV infection in different sites of human tissues remain elusive [8]. Furthermore, new types of cells are continually implicated as HIV reservoirs [9-10].

Based on results from studies in human tissue cultures, venous and cord blood, and placental tissues with immunophenotyping, image analysis, real-time PCR, and ELISA assay, Sundstrom et al have recently advanced a new hypothesis that human tissue mast cells are an inducible reservoir for persistent HIV infection [11]. This hypothesis postulates that unlike other HIV vulnerable cell lineages, progenitor mast cells (prMCs) are susceptible to infection during a limited period of their ontogeny. After infection with HIV, prMCs lose the expression of viral chemokine coreceptors and develop into long-lived, latently infected mature mast cells that are resistant to new HIV infection. In vivo recruitment of prMCs occurs in response to tissue injury, growth, remodeling, allergic reactions, or inflammation, which allow HIV-infected prMCs to spread persistent HIV infection to different tissue sites [11].

This hypothesis regarding the function of prMCs in HIV appears to be supported by some recent studies: (1) a previous study by a different group has shown that prMCs can be infected by HIV and retain virus with maturation in vitro [12], (2) increasing studies have shown that mast cells are capable of regulating inflammation, host defense, or innate immunity, and (3) the number and functions of mast cells change significantly following HIV infection [13-15]. This hypothesis, however, has not been validated in different tissue sites of HIV-infected individuals. Therefore, our study attempted to validate this hypothesis by statistically comparing the distribution of mast cells and p24 expressing cells in different tissue sites of HIV infected patients.

Paraffin-embedded tissue blocks from different anatomic sites (lymph node, cervix, parotid glands, nasopharynx, and GI-tract) of 10 HIV infected patients were retrieved from the files of The Armed Forces Institute of Pathology with consent from the contributors. All patients were known to be HIV-infected and none had mast cell-related disease.

Consecutive sections at 4-5um thickness were cut from each block and placed on positively-charged microscopic slides. The first and last sections from each case were subjected to H&E staining for morphological classification. The remaining sections were used for immunohistochemical staining. A mouse monoclonal antibody against human HIV p24 capsid protein was purchased from Novocastra Laboratories, Ltd (Newcastle, UK). A mouse monoclonal antibody (clone: AA1) against human mast cell tryptase was purchased from Dako (Giostrup, Denmark). The corresponding secondary antibody, ABC detection kits, and substrate kits were obtained from Vector Laboratories (Burlingame, CA).

To assess the specificity of the immunostaining, two technical approaches were utilized. First, different negative controls were used, which included (1) the substitution of the primary antibody with the normal serum, (2) the omission of the secondary antibody from the immunostaining sequence, (3) a series dilution of the primary antibodies, and (4) the inclusion of non-HIV infected normal tissue sections from each site. Second, the procedure was repeated at least twice using the same protocol and under the same condition. Immunostained sections were independently evaluated by all investigators. A given cell was considered positive, if distinct (++ or more) immunoreactivity was consistently seen in its cytoplasm, whereas all the negative controls were devoid of immunoreactivities.

All 10 cases showed p24 (+) cells and scattered mast cells or clusters of mast cells. The parotid tissues showed moderate reactive changes with increase leukocyte infiltration. All negative controls were devoid of distinct immunoreactivities. The evaluations among investigators were consistent.

Within lymph nodes, the p24 antibody showed a dendritic staining pattern and marked cells within follicular dendritic areas (surface staining presumed to be trapped virus rather than productive infection). In two immediate adjacent sections immunostained for mast cell tryptase and p24, respectively, mast cells and p24 expressing cells were differentially distributed. As shown in Fig 1, a vast majority of p24 expressing cells are arranged as densely packed clusters with different sizes and shapes, while a vast majority of mast cells are found scattered and individually distributed. Substantially fewer mast cells are found adjacent to, compared to those at a distance from, p24 expressing cell clusters. 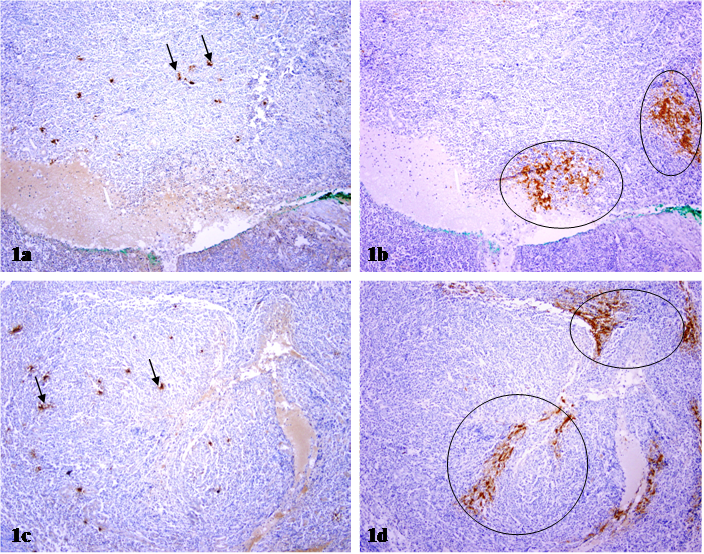 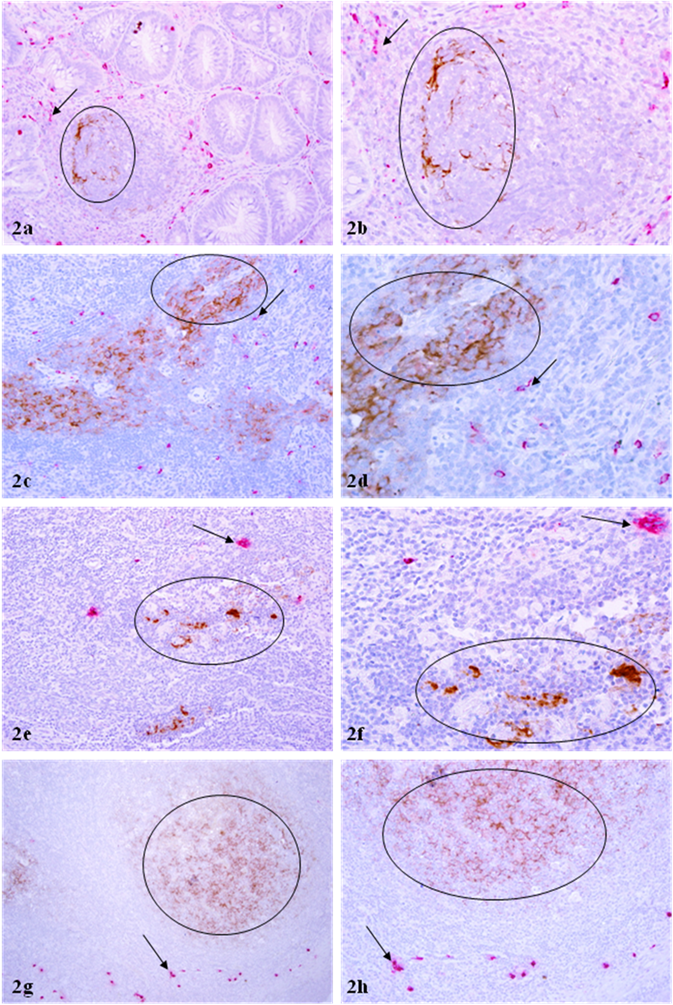 The distribution of macrophages sharply differed from that of mast cells in two aspects: 1) macrophages were consistently intermixed with or adjacent to p24 expressing cells, and 2) p24 immunostaining were seen in the cytoplasm of a subset of macrophages (Fig 4).

Frequency of co-localization of isolated p24 (+) and mast cells 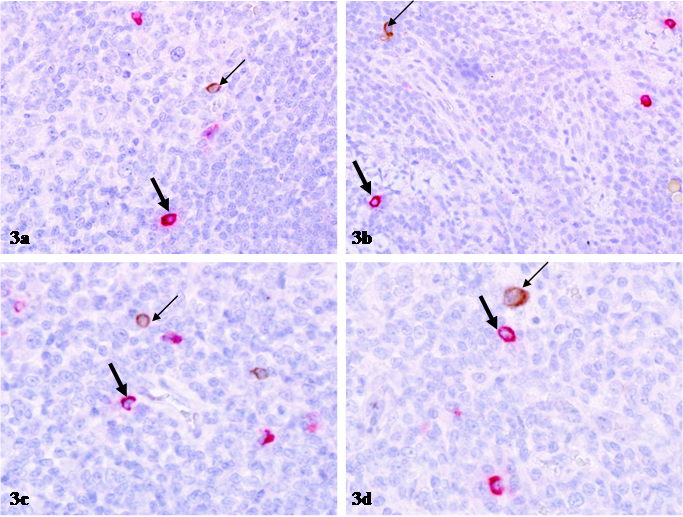 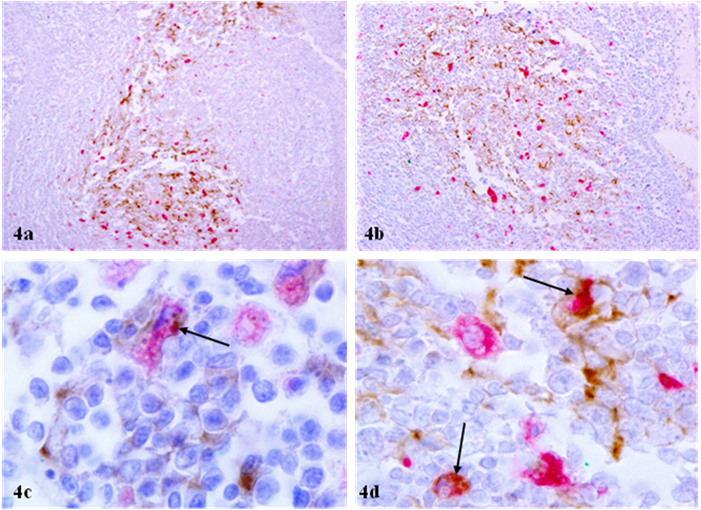 It has been well documented that direct physical contact among different cell types is the primary mechanism for HIV infection and AIDS pathogenesis [21]. The spread of HIV infection from reservoirs to different tissue sites is likely to share the same mechanism for two main reasons: 1) in vivo recruitment of prMCs occurs in response to tissue injury, growth, remodeling, allergic reactions, or inflammation; 2) several HIV susceptible tissue sites, including the lymph node, cervix, GI-tract, salivary glands, and male genital tract, normally harbor abundant prMCs [9-10, 22-24]. Although HIV infected prMCs may gradually lose the expression of viral chemokine coreceptors, the re-seeding or spread of the virus apparently requires the re-synthesis of the viral proteins and replication of the archival clone of the virus in the reservoir. The reactivation of latent HIV infection in the reservoir could be triggered by a number of factors, including T-cell activation, herpes-virus infection, or antifungal agent amphotericin B [25-27]. Thus, it is likely that a significant number of latently infected mast cells at the stage of reactivation will express both mast and viral specific proteins, or at least, they would be physically blended within or immediately adjacent to HIV infected cells in different tissue sites of HIV patients.

In contrast to our speculation, our study reveals differential distribution of mast and HIV infected cells, and a separate localization of mast cell and viral specific proteins in all or nearly all the sites and cells observed. The most likely explanation for our findings is that these mast cells are not derived from HIV infected circulating progenitors. In agreement with our speculation is the fact that previous studies have well documented that progenitor mast cells derived from undifferentiated bone marrow are susceptible to HIV infection for only a short period of time [12]. Thus, the establishment and number of HIV infected mature mast cells as a HIV reservoir will be largely dependent on the active recruitment of the susceptible circulating progenitors at the initial stage of HIV infection. In our cases, the number of the susceptible circulating progenitors might be very small, or no susceptible circulating progenitors were recruited at the initial stage of HIV infection. Alternatively, mast cells seen in our study might represent a latently HIV infected population that is not currently reactivated. In agreement with our speculation is that previous studies have documented that mature mast cells, unlike macrophages, no longer express a detectable level of viral chemokine coreceptors and may have become resistant to HIV infection [11-12]. The consistent lack of mast cells in areas surrounding p24 expressing cells, which is in sharp contrast to macrophages that are consistently intermixed with or adjacent to p24 expressing cells, suggest that mast cells may even have the capability to repel the in vivo recruitment into HIV infected sites.

In either case, our findings appear to have significant scientific and clinical implications. If further studies are unable to detect viral genetic sequences in mast cells, a statement could be made that mast cells may not be a significant reservoir for persistent HIV infection. On the other hand, if integrated viral gene sequences are detectable, mast cells could be potentially used as a unique model to study latent HIV infection. Since HIV reservoirs are the primary source of persistent HIV infection and drug resistance, identification of the predominant reservoirs, and the specific contribution and interactions among different reservoirs may lead to more effective interventions, and consequently improve prognosis.

16. Man YG, Tavassoli FA. A simple epitope retrieval method without the use of microwave oven or enzyme digestion. Appl Immunohistochem. 1996;4(2):139-141