TAR DNA-binding protein (TDP-43) is a highly conserved ribonucleoprotein [1, 2]. The primary transcript of the mammalian TDP-43 gene can be alternatively spliced to generate 11 mRNA molecules, with the major molecule containing all six exons and encoding TDP-43 protein [1]. TDP-43 is a member of heterogeneous ribonucleoprotein (hnRNP) family, which is characterized by the ability to bind RNA and DNA sequences through a common nucleotide-binding domain known as RNA recognition motif [3-5]. Deletion of the TDP-43 gene in mice causes an arrest to embryonic development [6-8], indicating that TDP-43 plays a critical role in development. While the physiologic functions of TDP-43 remain to be elucidated, pathogenic mutation of the TDP-43 gene is definitely linked to amyotrophic lateral sclerosis (ALS) and to motor neuron disease associated with frontotemporal lobe degeneration [9-13], indicating that mutant forms of TDP-43 are neurotoxic. Indeed, overexpression of human TDP-43 with pathogenic mutations causes neurodegeneration in drosophila, mice, and rats [14-19]. Interestingly, TDP-43 is hyper-phosphorylated, ubiquitinated, and aggregated in affected cells in sporadic ALS and in a subset of frontotemporal lobe degeneration (FTLD) [20, 21]. The TDP-43 proteinopathy implies that aberrant accumulation and modification of normal TDP-43 is toxic to vulnerable neurons. This notion is supported by accumulating evidence. Clinical studies showed that variation in the 3'-untranslated region of the TDP-43 gene is associated with increased expression of the TDP-43 gene in ALS and FTLD [22, 23]. Overexpression of the normal human TDP-43 gene can induce neurodegeneration in transgenic animals [15, 17, 19]. Previous studies collectively suggest that TDP-43 plays important roles in development and incurs toxicity to vulnerable neurons when the TDP-43 gene is pathogenically mutated or is aberrantly increased in gene expression.

Similar to TDP-43, fused in sarcoma (FUS) also is a conserved ribonucleoprotein and its mutant forms are also linked to ALS [24-29]. FUS is initially reported to translocate and fuse with one of several other genes to form chimeric oncogenes in leukemia and liposarcoma [30, 31]. FUS mainly resides in the nucleus [32], but increasing evidence showed that FUS shuttles between the nucleus and the cytoplasm [33-36]. As a ribonucleoprotein, FUS participates in gene regulation [34, 35, 37, 38]. Deletion of the FUS gene causes postnatal death in inbred mice [39, 40], suggesting an important role for FUS in cell survival. Like TDP-43 proteinopathy, FUS-positive inclusion is a feature of sporadic ALS and FTLD [41, 42]. Findings in the FUS gene suggest an important role for FUS in development and in neuron survival.

Animal use followed NIH guidelines and animal use protocols were approved by the Institutional Animal Care and Use Committees at Thomas Jefferson University. C57BL6/J mice and Sprague-Dawley rats were used in this study. At each defined age, three mice and rats were used for analyses. For protein and RNA extraction, anesthetized mice and rats were killed and their tissues were dissected, frozen in powdered dry ice, and stored in a -80°C freezer until analysis. For histology, anesthetized animals were transcardially perfused with 4% paraformaldehyde in phosphate buffer (pH 7.4) and their brains and lumbar spinal cords were dissected and fixed in the same fixative until further use.

Animal tissues were fixed 4% paraformaldehyde, cryopreserved in 30% sucrose, and cut into three series of consecutive sections (20 μm) at a Cryostat. Each set of tissue sections was immunostained for TDP-43, FUS, or ChAT. For immunohistochemistry, tissue sections were incubated with rabbit polyclonal antibody against TDP-43 (ProteinTech Group) or FUS (Bethyl Laboratories: A300-292A). For double-fluorescence labeling, cross sections of lumbar spinal cord were incubated with goat anti-ChAT (Millipore) plus rabbit anti-TDP-43 or rabbit anti-FUS antibodies. Immunohistochemistry for TDP-43 and FUS was done with biotinylated goat anti-rabbit IgG (1:500; Vector Laboratories) and peroxidase-conjugated avidin-biotin complex (ABC kit; Vector Laboratories). After thorough washing, bound antibodies were visualized by addition of diaminobenzidine (Vector Laboratories). Immunostained cells were observed under a Nikon microscope and were documented with a Nikon digital camera. Immunofluorescence staining for ChAT (green) and TDP-43 (red) or FUS (red) was visualized and documented with a confocal microscope.

Frozen lumbar spinal cord was cut into sections of 100 µm on a Cryostat and twenty consecutive sections were collected from each animal. Tissue sections were mounted on RNase-free heat-treated slides and stained with 1% toluidine blue in 70% ethanol for 5 min at -20 °C, followed by several washes in 70% ethanol at -20 °C to remove excess dye. The ventral horn of spinal cord was dissected under microscope and collected in 1ml Trizol (Sigma) for each animal. Total RNA was extracted from pooled ventral horn and cleared of DNA contamination with RNA Easy kit and RNase-free DNase (Qiagen). One microgram of purified RNA from each sample was reversely transcribed to cDNA with oligo-dT primer (RT kit, Invitrogen). Relative levels of TDP-43 and FUS mRNA in individual samples were estimated by quantitative PCR with the following gene-specific primers: 5'-GAGGATTTCCCAGTGGAGGT-3' (forward) and 5'-CCTTACACTGGTTGCATTCA-3' (reverse) for the FUS gene; 5'-GCAATCTGGTCTATGTTGTC-3' (forward) and 5'-ACCCAACACTATGAGGTCAG-3' (reverse) for the TDP-43 gene; and 5'-TGGTTCGCTACTCCCTTGAC-3' (forward) and 5'-CTTGATGGCCTGGGCAGTT-3' (reverse) for the L17 gene. The mRNA level of the L17 gene was used as an internal control for PCR quantification.

The mRNA levels in each sample were estimated by quantitative PCR with SYBR green kit per manufacturer's instruction (Qiagen). Primers were used at a concentration of 500 nM. Cycling conditions were 15 min at 95°C followed by 40 cycles of 15 seconds at 94°C, 30 seconds at 60°C, and 20 seconds at 72°C. Aliquots of the amplified products were separated on 3% agarose gels to ensure amplification of the specific products at the predicted length. The threshold cycle number (Ct) for TDP-43 or FUS was normalized to the Ct for L17 and the relative mRNA levels of TDP-43 or FUS was determined and expressed as a ratio relative to the mRNA level in 10-day-old rats.

Expression of TDP-43 and FUS is markedly decreased in adult mice. A-D, Immunoblotting showing that expression of TDP-43 and FUS was gradually but markedly reduced in mouse tissues during postnatal development. Tissues were dissected from C57BL6 mice at varying ages (day: d) and 30 μg of total proteins in each tissue lysate was resolved on gradient SDS-PAGE. Blotting membranes were probed sequentially with antibodies against FUS, TDP-43, and GAPDH. 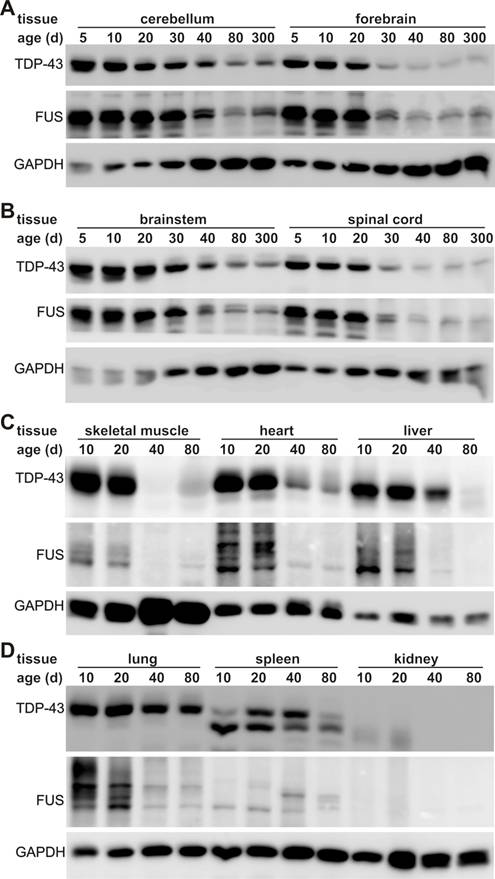 Expression of TDP-43 in spinal motor neurons remains sustainable in mouse lifetime. A, B, Immunohistochemistry showing that large cells in the ventral horn of spinal cord expressed TDP-43 at sustainable levels while the population of TDP-43-expressing cells was markedly decreased in aged mice. Lumbar spinal cords were dissected from C57BL6 mice at varying ages and cut into transverse sections on a Cryostat. Tissue sections were immunostained with an antibody against TDP-43. Scale bars: A, 100 μm; B, 20 μm. C, Immunofluorescence staining showing that the motor neurons of lumbar spinal cord expressed TDP-43 at sustainable levels in mouse lifetime. 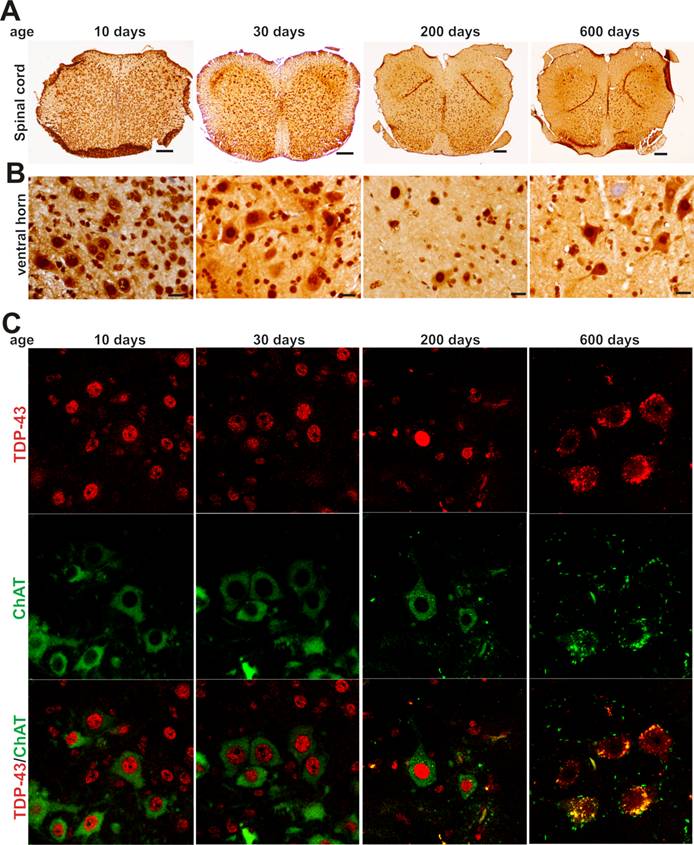 Expression of FUS in spinal motor neurons remains sustainable in mouse lifetime. A, B, Immunohistochemistry showing that large cells in the ventral horn of spinal cord expressed FUS protein at sustainable levels while the population of FUS-expressing cells was markedly decreased in aged mice. Lumbar spinal cords were dissected from C57BL6 mice at varying ages and cut into transverse sections on a Cryostat. Tissue sections were immunostained with an antibody against FUS. Scale bars: A, 100 μm; B, 20 μm. C, Immunofluorescence staining showing that the motor neurons of lumbar spinal cord expressed FUS at sustainable levels in mouse lifetime. 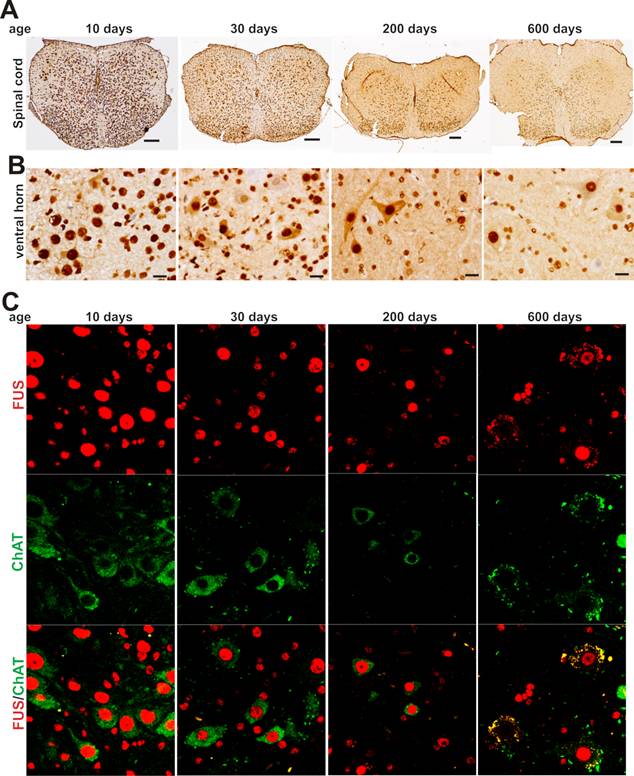 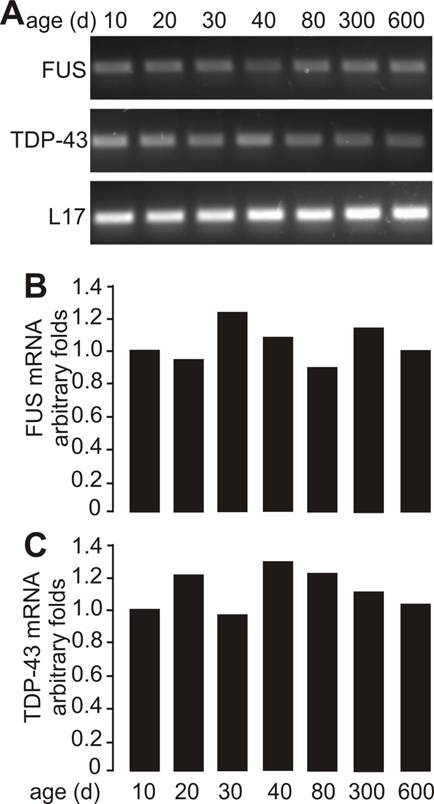 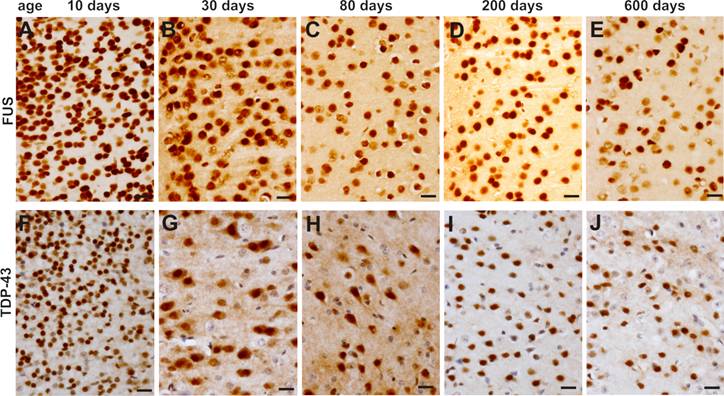 Expression of FUS and TDP-43 remains sustainable in the motor neurons in rat's lifetime. A, Immunoblotting showing that expression of FUS and TDP-43 in rat's brain and spinal cord was markedly decreased during postnatal development. B-E, Immunohistochemistry showing that spinal motor neurons sustainably expressed FUS and TDP-43 while the population of FUS- and TDP-43-expressing cells was markedly decreased in aged rats. Lumbar spinal cords were dissected from SD rats at varying ages and cut into transverse sections on a Cryostat. Tissue sections were immunostained with antibodies against FUS or TDP-43 and were counterstained with haematoxylin. Micrographs (B1-E1) showed the left halves of lumbar spinal cords and micrographs (B2-E2) showed the ventral horns of the corresponding lumbar spinal cords shown in B1-E1.

Lifetime-long robust expression of the TDP-43 and FUS genes in motor neurons suggests that homeostasis of TDP-43 and FUS proteins is critical to motor neuron survival. Lasting alternation in the functions of these genes may be harmful to motor neurons. Aggregation of hyper-phosphorylated and ubiquitinated TDP-43 is a hallmark of sporadic FTLD and sporadic and non-SOD1-linked familial ALS [20, 21]. Formation of TDP-43 aggregates may reduce the availability of functional proteins, lead to generation of harmful intermediate products, or indicate an excess of functional or malfunctional TDP-43 proteins. Although the consequences of protein aggregation remain to be elucidated, TDP-43 inclusions definitely are pathology [20, 21]. Some disease genes are constantly expressed in vulnerable neurons and an increase in gene expression is sufficient to induce neurodegeneration. Alpha-synuclein is linked to Parkinson's disease, an age-related neurodegenerative disease that primarily results from degeneration of dopaminergic neurons in the midbrain [52-54]. During the process of aging, dopaminergic neurons preserve a high level of alpha-synuclein protein and oxidative modification of alpha-synuclein increases the protein level [55]. As aging compromises cellular protection mechanisms, high load of disease protein may sensitize the cells to internal or external risk factors. Intake of 1-methyl-4-phenyl-1, 2, 3, 4-tetrahydropyridine (MPTP) induces selective loss of dopaminergic neurons in human and in animals [56, 57]. While overexpression of alpha-synuclein sensitizes dopaminergic neurons to MPTP toxicity in transgenic mice [58], deletion of the alpha-synuclein gene protects dopaminergic cells against MPTP toxicity in the knockout mice [59-62]. Similar to alpha-synuclein [55], TDP-43 and FUS retain a high level in vulnerable neurons throughout a lifetime (Figures 1-6). Disturbance of TDP-43 and FUS homeostasis may incur toxicity to motor neurons. Increased expression of the TDP-43 gene is observed in ALS patients [22, 23], and overexpression of the human TDP-43 gene induces motoneuron degeneration in transgenic mice [15]. Increased expression of the TDP-43 gene indeed is neurotoxic [15, 63]. TDP-43 and FUS are two ribonucleoproteins and are all linked to ALS. Increased expression of the FUS gene may also be harmful to motor neurons though convincing evidence is under search.

Taken together, ubiquitous, robust gene expression in postnatal rodents suggests an important role for TDP-43 and FUS in development. In adulthood, expression of these two genes was markedly reduced in the most tissues, but was maintained at substantial levels in the motor neurons, implying that TDP-43 and FUS may continuously play a critical role in motor neurons. Such expression patterns may be related to the selective neurotoxicity of pathogenic mutations in the TDP-43 and the FUS genes. To faithfully reproduce the pathology of TDP-43 or FUS gene mutations in rodents, we must replicate the expression patterns of the genes in animals by using sophisticated genetics approaches such as gene knockin. To avoid a disturbance of rodent's development, temporal or spatial gene deletion may be required to determine the functions of TDP-43 and FUS in motor neurons. Our findings provide guidance to the development of rodent models for TDP-43- or FUS-caused pathology.

The authors declare no conflicts of interest.