Silent information regulator 1 (SIRT1) is a nicotinamide adenine dinucleotide (NAD)-dependent histone deacetylase (class III HDAC), which has been reported to be a crucial regulator in the pathophysiology of aging, metabolic disease and neurodegenerative disorders [1-6]. In addition, SIRT1 has been shown to be a cancer cell-specific growth factor [7-10]. The knockdown of SIRT1 expression halts the growth of various tumor cell lines, but does not impact normal human epithelial cell growth [7-9].

SIRT1 has classically been thought of as a nuclear protein that functions to regulate histones and non-histone substrates with its deacetylase activity [4-6, 11-16]. Many factors in the nucleus have been identified as SIRT1 substrates, such as p53 [17], FOXO [18, 19], E2F [20], HIC1 [21], Rb [22], AR [23] and WRN [24, 25]. These SIRT1 nuclear substrates are involved in various biological processes including stress-induced apoptosis, cell senescence, cell growth and DNA repair. Recent evidence suggests, however, that SIRT1 can also localize to the cytoplasm such as in murine pancreatic beta cells and rat cardiomyocytes [26-29]. In cancer cells, SIRT1 cytoplasmic localization remains largely unidentified, and it is unclear if SIRT1 localization changes during carcinogenesis.

In this study, we report for the first time that while SIRT1 is mainly localized in the nucleus of normal / primary cells, it is predominantly localized in the cytoplasm of cancer / transformed cells. Not only have we observed this localization pattern in prostate cancer cell lines, but we have also seen this in lung and breast cancer cells, transformed cell lines and prostate carcinoma tissues. We found that inhibition of PI3K/IGF-1R signaling or reduction of mitotic activity in cancer cells reduces the abundance and protein stability of cytoplasmic SIRT1. Moreover, we show that SIRT1 is required for PI3K induced growth in prostate cancer cells. These results indicate that aberrant cytoplasmic localization of SIRT1 is a cancer specific alteration; PI3K/IGF-1R signaling increases the stability of cytoplasmic SIRT1 and ultimately results in its aberrant cytoplasmic localization. Because SIRT1 is an important protein deacetylase with both histone and non-histone substrates, changes in its localization will greatly affect its targets and will likely translate further into important functional consequences for cell growth, survival and proliferation. Our findings suggest that the over-expressed cytoplasmic SIRT1 in cancer cells may greatly contribute to its cancer-specific function by working downstream of the PI3K/IGF-1R signaling pathway.

Isolation of nuclear and cytoplasmic protein

Cells (103-104) were plated in a Chamber Slide and incubated for 24 hours. Cells were fixed with 4% paraformaldehyde, treated with 0.1% Sodium Citrate + 0.1%Triton 100 and with Image-iT FX Signal Enhancer (Invitrogen). The cells were blocked with 3% BSA, treated with anti-SIRT1 antibodies, then incubated with Alexa Fluor secondary antibodies (Invitrogen) and stained with DAPI.

BrdU immunostainning was performed with mouse anti-BrdU antibody. After being labeled with 20uM BrdU for 12 hours, standard indirect immunofluorescence was performed as described above, except for one hour DNase I treatment before the blocking step. Images were collected using a deconvolution microscope (Nikon deconvolution wide-field Epifluorescence system).

2x104cells/well was seeded in a 96 well plate and BrdU (5mM) was added to each well for 24hr. The cells were fixed and stained with anti-BrdU antibody for 20hr at RT. Anti-mouse IgG HRP was added for 30 min and 100ul/well TMB peroxidase substrate was added for 30min. The integration of BrdU into the cell was determined at 450mM in the spectrophotometer microplate reader. The wells that did not receive cells and wells that contain cells but did not receive any BrdU reagent were included as controls. The detailed procedure can be found in the BrdU Cell Proliferation Assay (Cat# 2750) from Milipore (Billerica, MA)

SIRT1 is predominantly localized in the cytoplasm in cancer / transformed cells

In order to clearly understand the localization pattern of SIRT1 in cancer cells, we performed immunoblots combined with cell fractionation to analyze the localization of SIRT1. Lung, breast and prostate cell lines, as well as tissues, were analyzed. The whole cell or tissue lysates were separated into nuclear and cytoplasmic fractions, and immunoblots were performed with anti-SIRT1 antibodies. Unexpectedly, we found that SIRT1 (MW=120kd) was predominantly localized in the cytoplasm, rather than in the nucleus of cancer cells lines including DU145, PC3, LNCaP and LNCaP-C4-2B prostate cancer cell lines, H460 lung cancer cells, MCF-7 breast cancer cell lines, and prostate cancer tissues (Figure 1A and data not shown). Fractionation efficiency was confirmed by immunoblot with the α-tubulin antibody that recognizes the protein in the cytoplasm, and the lamin A/C that binds the protein in the nucleus (Figure 1A). To ensure that this cytoplasmic localization of SIRT1 was not occurring as a result of antibody epitope specificity, we subsequently performed immunoblots with several other SIRT1 antibodies and similar localization patterns of SIRT1 were observed (Figure S1). In order to further confirm the specificity of localized cytoplasmic SIRT1, we sought to determine if cytoplasmic SIRT1 could be specifically knocked down via RNA interference. Our results demonstrated that both nuclear and cytoplasmic SIRT1 (MW=120kd) levels are greatly reduced by RNA interference of SIRT1 (siSIRT1) as compared to vector-transfected cells (siVector) in DU145, PC3, LNCaP and H460 cell lines (Figure 1B and data not shown).

We subsequently analyzed the localization patterns of SIRT1 in normal cell lines and tissues. In contrast to cancer cell lines and tissues, we found SIRT1 predominantly localized in the nucleus of normal cells, including the prostate cell line, PZ-HPV-7, normal prostate tissues, the normal lung cell line, MRC5 (Figure 1C), and the normal human fibroblast cell line, BR3 (Figure 1D). These results indicate that the SIRT1 localization pattern differs between cancer and normal cells. SIRT1 is predominantly localized in the cytoplasm of cancer cells and in the nucleus of normal cells.

In addition, we compared the localization patterns of SIRT1 in transformed and primary cells. We established a transformed and immortalized fibroblast cell line, BR3neo, through transfection of SV40 Large T to a normal primary fibroblast cell line, 1BR3 [31]. As shown in Fig.1D, SIRT1 is predominantly localized in the nucleus in BR3, the primary cell line, whereas it is predominantly localized in the cytoplasm in the BR3neo transformed cells. These results indicate that the predominant cytoplasmic localization of SIRT1 is also associated with cell transformation. 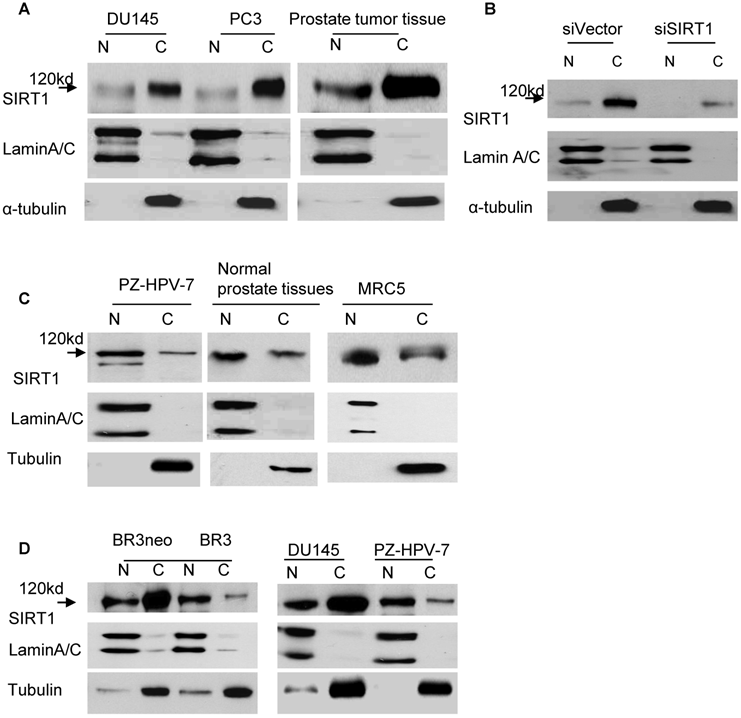 Since murine SIRT1, which has 84% homology with human SIRT1, has been reported to be a nucleo-cytoplasmic shuttling protein mediated by a NLS and NES-dependent mechanism [37], we asked whether the decreased cytoplasmic SIRT1 induced by serum depletion and hydroxyurea treatment in cancer cells had translocated to the nucleus. Immunoblot analysis was performed with the fractionated nuclear and cytoplasmic proteins, which were treated with serum depletion or hydroxyurea. The results showed no increase in nuclear SIRT1 when cytoplasmic SIRT1 is diminished by starvation (Figure 3A) or hydroxyurea treatment (data not shown). In addition, we treated the cells with leptomycin B (LMB), an inhibitor of the NES-dependent nuclear exporter, and found SIRT1 in cancer cells neither accumulated in the nucleus nor diminished from the cytoplasm in the presence of LMB (Figure 3B). Additionally, we treated the starved cells with serum with or without LMB and found that LMB treatment did not affect the cytoplasmic SIRT1 restoration by serum replacement (Figure 3C). These results suggest that predominant cytoplasmic localization induced by mitotic activity or growth signals is not due to SIRT1 translocation, but rather to the change in the abundance of cytoplasmic SIRT1. 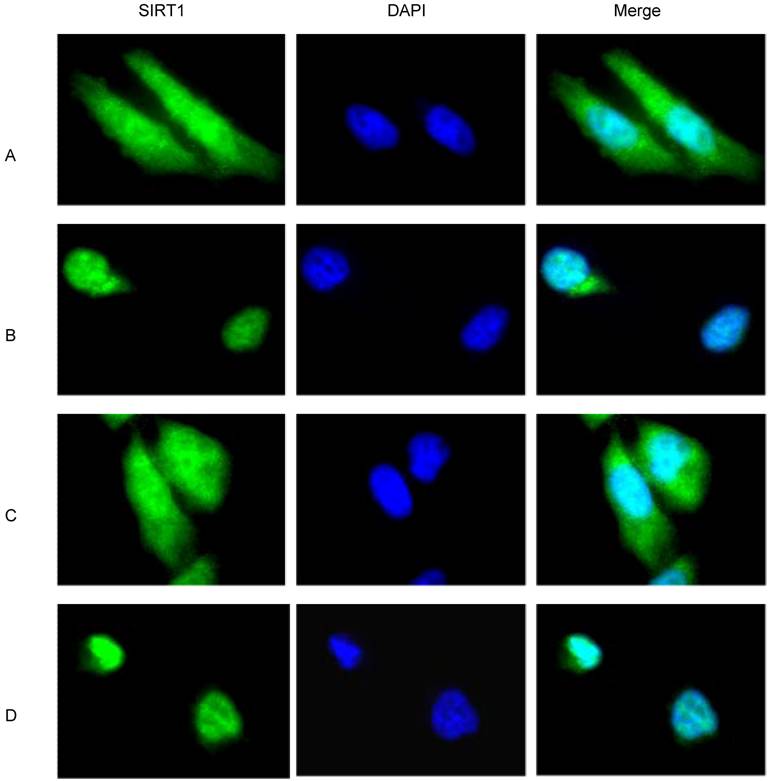 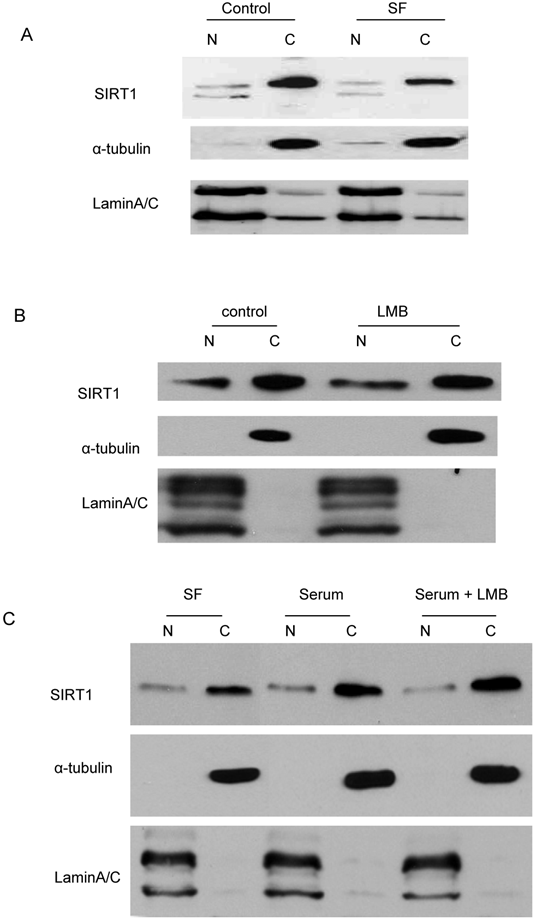 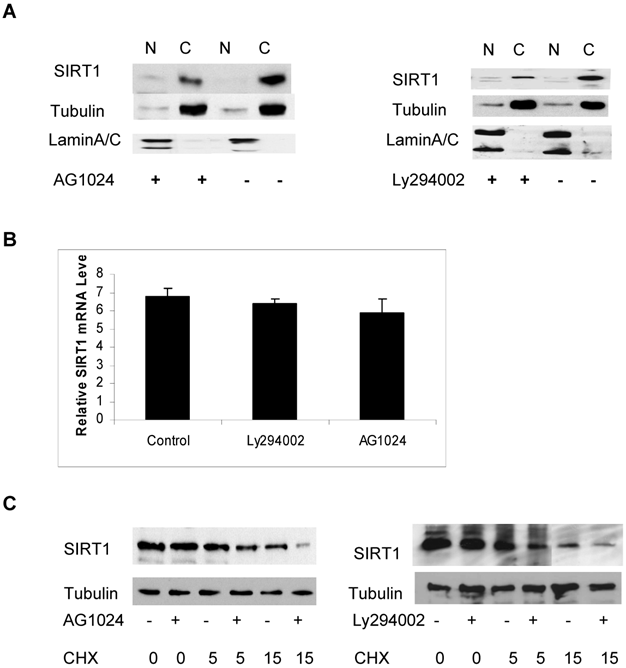 PI3K and IGF-1R have been reported to play an important role in prostate cancer cell growth and survival [38, 39]. We found that PI3K can regulate cytoplasmic SIRT1 stability, suggesting that SIRT1 may play a role in PI3K-mediated cancer cell growth. We therefore firstly performed an MTS assay to study the effect of SIRT1 knockdown on PI3K inhibitor induced cell growth arrest. The results showed that Ly294002 treatment induced great inhibition in SIRT1-overexpressed prostate cancer cells, induced 50% growth inhibition in PC3 cells and 45% in LNCaP cells with wt SIRT1, while inducing only a 20% inhibition in SIRT1 knockdown cells (Figure 5A & 5B). 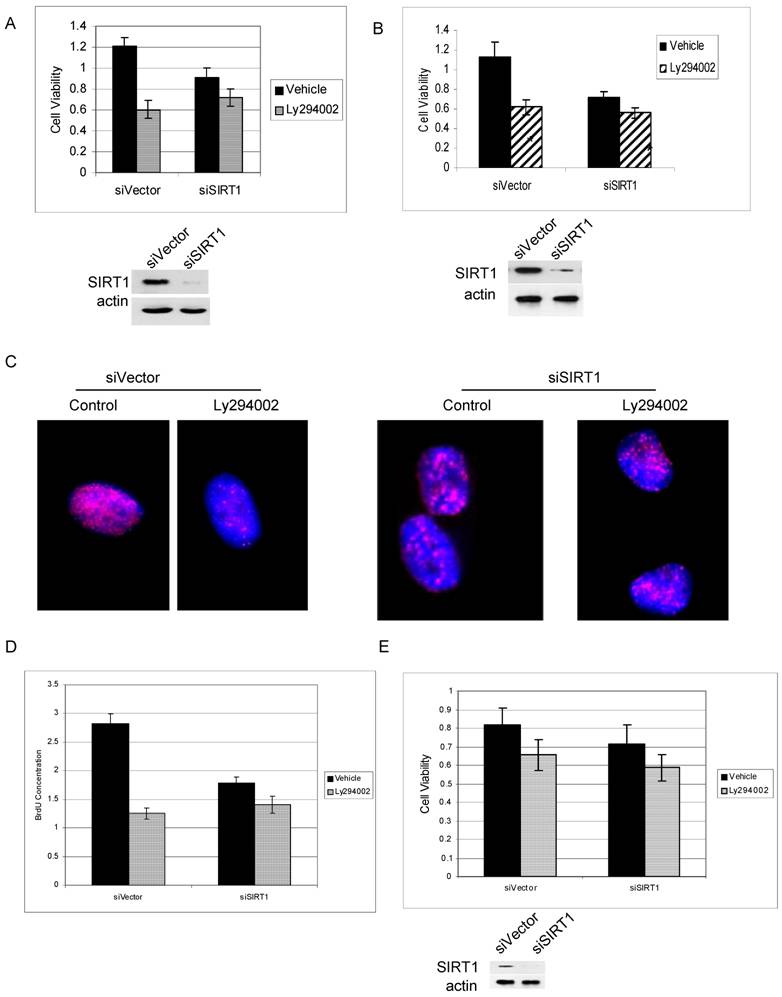 Similar results were seen using Brdu immunostaining (Figure 5C) and BrdU-based proliferation assay (Figure 5D). The results show that PI3K inhibition result in much more reduction of Brdu integration to the cells in SIRT1 wild type cells than in SIRT1 knockdown cells (Figure 5C & 5D). However, in normal prostate PZ-HPV-7 cells in which SIRT1 expression is lower and is predominantly in the nucleus, PI3K inhibition induce little growth arrest for both SIRT1 wt and SIRT1 knockdown cells (Figure 5E). These results suggest that SIRT1 is an important downstream target of PI3K in the regulation of cancer cell growth and survival, and overexpressed cytoplasmic SIRT1 in cancer cells may play an important role in this regulation.

In this study we demonstrated that SIRT1 is predominantly localized in the cytoplasm of cancer cells, while in normal cells, SIRT1 is predominantly localized in the nucleus. SIRT1 cytoplasmic localization in cancer cells is largely unidentified and it is unclear if SIRT1 localization has any changes during carcinogenesis. Our study represents the first identification that aberrant cytoplasmic localization is one of the cancer-specific alternations to SIRT1. This finding may suggest a new mechanism for SIRT1 function as a cancer-specific survival factor by targeting cytoplasmic proteins.

In contrast to its well-described role in the nucleus, the function of cytoplasmic SIRT1 is largely unknown. However, recent findings that some cytoplasmic proteins can be deacetylated by SIRT1 provide important insights into the function of cytoplasmic SIRT1. SIRT1 was found to enhance IGF-1 signaling by deacetylating ISH-2, which is a cytoplasmic protein [27]. SIRT1 also deacetylates cytoplasmic cortactin and promotes cancer cell migration [40]. In addition, SIRT1 was found to promote the activation of cytoplasmic kinases, including AMPK, Ras-MAPK, Erk and S6K1 [8, 41, 42]. Furthermore, SIRT1 was shown to regulate nucleo-cytoplasmic shuttling of transcription factors, including FOXO3a, FOXO1, and PGC-1 [43-47]. Because many known SIRT1 substrates, including p53 and NF-κB, also shuttle between the nucleus and cytoplasm, SIRT1 could regulate their function via cytoplasmic deacetylase activity. Recent study show that cytoplasmic SIRT1 can promote nerve growth factor (NGF)-induced neurite outgrowth [48]. In addition, we found that SIRT1 can form a complex with E-cadherin in the cytoplasm and regulate cell-cell adhesion (unpublished data). These results provide support for the association of cytoplasmic SIRT1 with kinase signaling, nucleo-cytoplasmic shuttling of the transcription factors, and with the proteins involved in cell adhesion and migration. SIRT1 may now prove to be more multifaceted in function due to its newly discovered predominant cytoplasmic localization, which may play a critical role in cancer cell development and progression by targeting cytoplasmic substrates. 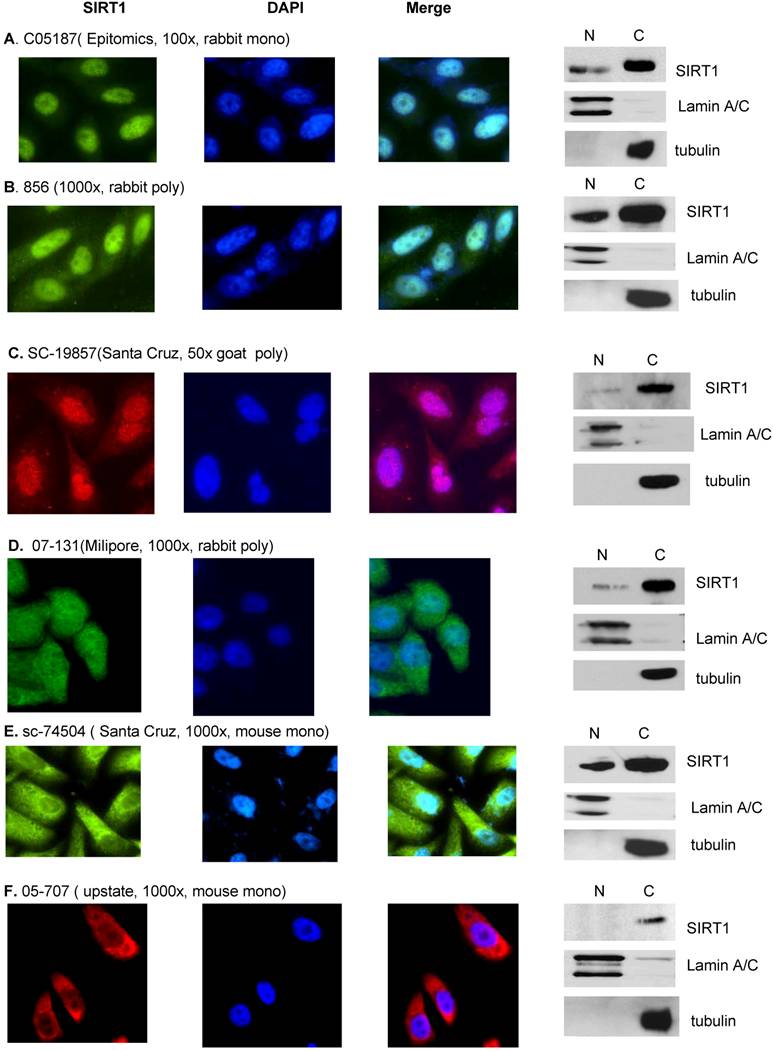 Activated phosphoinositide 3-kinase (PI3K) is an important signaling molecule and acts as a key survival factor involved in the control of cell proliferation, apoptosis and oncogenesis [49]. Our results show that SIRT1 is required for PI3K mediated cancer cell growth. The tumor suppressor PTEN is an inhibitor of PI3K and its loss or mutation has been associated with many different types of cancer; in the absence of PTEN, PI3K is constitutively activated and strongly inhibits apoptosis and promotes cell survival and proliferation [39, 50]. Interestingly, SIRT1 has been shown to deactivate PTEN by deacetylation [51] and our results show that SIRT1 can be regulated by PI3K. It seems that there could be a positive feedback loop in the cell whereby SIRT1 is a downstream target of PI3K signaling, which may sequester SIRT1 in the cytoplasm to deacetylate PTEN and act on other non-histone substrates regulating cell growth and survival. Indeed we found SIRT1 is required for PI3K mediated cell growth in prostate cancer cells in which cytoplasmic SIRT1 is overexpressed, but inhibiting PI3K in the SIRT1 deficient cells, or normal prostate cells in which SIRT1 expression is lower and is predominantly in the nucleus, produces a much lower percentage of growth inhibition (Figure 5). These results suggest that overexpressed cytoplasmic SIRT1 in cancer cells may be an important downstream target of PI3K in the regulation of prostate cancer cell growth and survival. However, further investigation is needed to elucidate the detailed mechanism by which cytoplasmic SIRT1 is involved in P13K-mediated cell growth.

The authors declare that they have no conflicts of interest