Sodium currents are an important transmembrane current and responsible for the formation of action potential duration in a variety of cells such as cardiomocytes, neurons, and vascular smooth muscle cells. [1-3]. The structural or functional alteration of sodium channel has been showed to trigger or aggravate the arrhythmias and other heart diseases, such as LQT syndrome and Brugada syndrome [3-7]. Though lots of studies revealed the important roles of sodium currents in human and animals cardiomocytes, the information about the developmental changes of sodium currents in postnatal human hearts was limited [8-9].

During the past decades, the relatively large body of data has documented that there are significant developmental changes in the density and characteristics of calcium currents and potassium currents observed in mammalian cardiac tissues [10-15]. For instance, it was reported that transient outward potassium currents both in atrial and ventricular cardiomocytes underwent a progressive increase in postnatal mouse [13]. Calcium currents are also observed much larger in adult hearts than pediatric hearts [16]. Likewise, the mRNA expression and the channel kinetics of sodium channel also display the age-relevant changes in mouse and canine hearts [17-18]. Especially recently, a large-scale analysis of gene expression of cardiac ionic channels showed that SCN5A expression was remarkably increased during postnatal development in mouse [17]. However, whether sodium currents also undergo the developmental increase from pediatric to adult hearts remain unknown. The present study was carried out to investigate the difference of sodium currents between pediatric and adult hearts, which will help to provide the evidence that sodium channels underwent postnatal development in human atria just like other currents.

Atrial samples were obtained from human right atrial appendage of six adult patients with rheumatic heart diseases (42.5±1.3 years old) undergoing cardiopulmonary bypass, and five pediatric patients with congenital heart diseases (3.4±1.2 years old) undergoing cardiopulmonary bypass. All the experimental procedures were approved by the ethics committee of Harbin Medical University, with informed consent of these patients, and performed in accordance with the principles outlined in the Declaration of Helsinki. All the patients were in normal sinus rhythm with no record of atrial arrhythmias. Human atrial specimens were immediately placed in KB solution gassed with oxygen (95% O2, 5% CO2) at 4°C from surgical excision. The method to isolate human atrial myocytes is just as described previously with some modifications [9]. In brief, atrial samples were cut into chunks and washed three times in oxygenated Ca2+ free Tyrode's solution at 37°C, and then was incubated in 10 mL Ca2+ free Tyrode's solution containing collagenase type II and BSA for 40 min at 37°C. Following, the tissues were transferred to fresh 10 mL Ca2+-free Tyrode's solution containing collagenase type II. The isolation was finished when microscopic examination revealed a satisfactory number of intact cardiomyocytes. Human atrial myocytes were collected and resuspended in KB solution and then kept at 4°C before they were used.

A small drop of KB solution containing isolated human atrial cardiomyocytes was placed in a 1-mL chamber mounted on the stage of an inverted microscope. After human atrial cells adhered to the bottom of the chamber, the external solution for recording sodium currents was used to continuously superfuse these cells. Only rod-shaped atrial myocytes with clear cross-striation were selected for current recording in the present study. The whole-cell patch-clamp techniques were used to record sodium currents in the voltage-clamp mode by an Axopatch 200B amplifier (Axon Instruments). When filled with pipette solution the electrodes had tip resistances from 2 to 4 MΩ. The potential of the pipette was zeroed before contacting the cell membrane in the bath solution. Voltage command pulses were generated by a 12-bit digital-to-analog converter controlled by pClamp 9.0 software (Axon Instruments). After a gigaohm seal formation, the membrane was ruptured to form the whole-cell configuration. The capacitance and series resistance were compensated and sodium currents data were expressed as current density (pA/pF) by normalizing the current to its capacitance for each atrial myocytes. Sodium currents (INa) were recorded at room temperature (18 ± 1oC).

All the data are presented as mean±SEM. Statistical analysis was performed by ANOVA and the student t-test. Boltzmann function was used to fit the voltage-dependent activation and inactivation curve of sodium currents. The mono-exponential function was used to determine the recovery time constants of sodium currents from inactivation. A two-tailed value of P<0.05 was taken to indicate statistical significance. 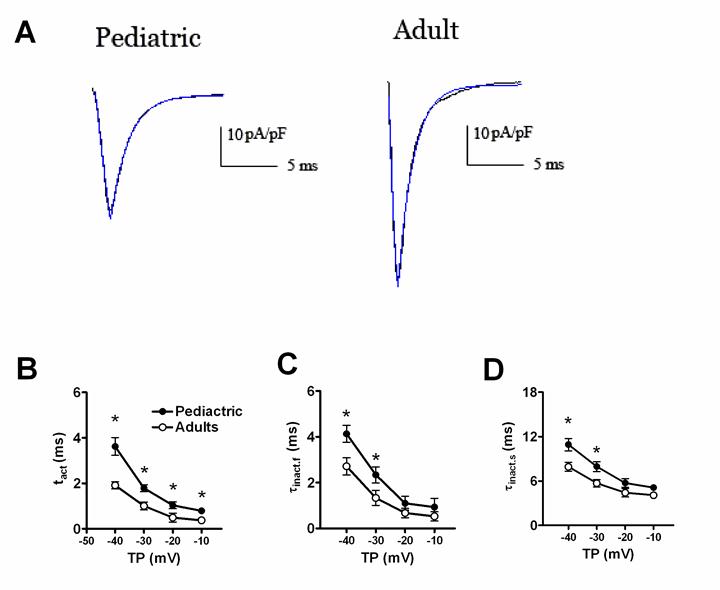 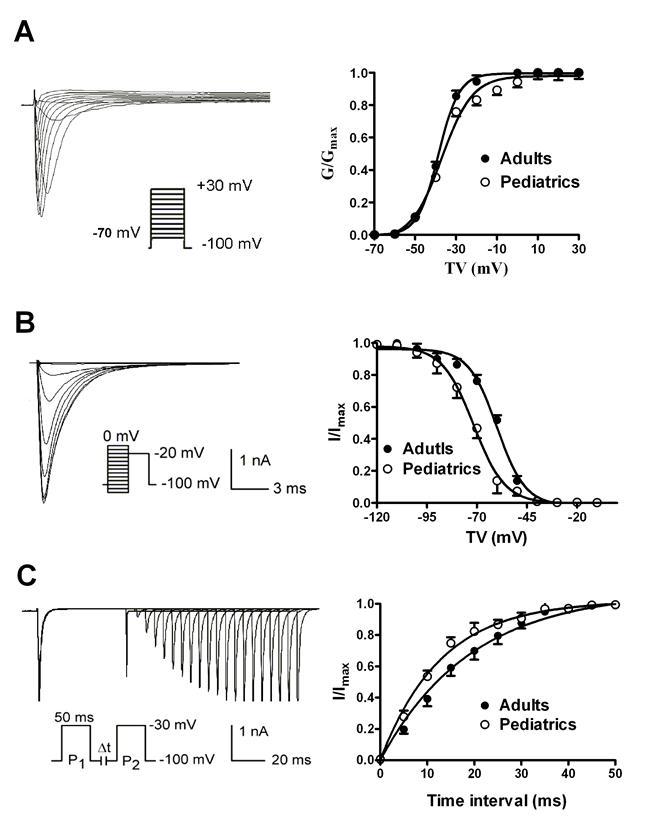 The main findings of the present study were that there were significant differences of sodium current properties between pediatric and adult atrial myocytes, which firstly provided the evidence for the postnatal development of sodium currents in human atrial cells.

Sodium currents play a key role in the initiation and rapid repolarization of action potential duration in many types of cells [1-3]. Cardiac sodium channels are mainly composed of pore-forming α-subunit such as Nav1.5 (SCN5A) and auxiliary β-subunits [8, 19-20]. The abnormalities of cardiac sodium channel subunits provide the pathological substrate for severe Long QT syndrome, fetal ventricular arrhythmias or atrial arrhythmias [3-7, 20-21]. In a previous study, we compared the characteristic of sodium currents between right atrial appendage and atrial septum of the same heart, and found smaller sodium currents in right atrial appendage compared with atrial septum, which allowed for faster conduction in these cells than right atrial appendage [9]. In summary, a lot of studies have revealed that sodium currents are very important for the physiological functions of human and animals' hearts, but whether sodium currents undergo the developmental changes in postnatal human hearts is completely unknown.

Taken together, adult atrial myocytes exhibited significantly different characteristics of sodium currents from pediatrics, including a larger current density, and slower inactivation and recovery. These findings provide the experimental evidence for the postnatal development of sodium currents in human atrial cells.

This work was supported by the Special Postdoctoral Scientific Funds of China (201003461), the National Natural Science Fund of China (30900601/30971252) and the Dr. Wu Lien-Teh (Wu Lian-De) Youth Foundation of Harbin Medical University.