The Adhesion Modulating Properties of Tenascin-W

Tenascins are a family of extracellular matrix glycoproteins capable of influencing cell proliferation, fate and behavior by modifying cell adhesion either directly via their cell surface receptors or indirectly through interactions with other matrix molecules (1). The first member of the family to be characterized as 'anti-adhesive' was tenascin-C. Cells cultured on substrata coated with tenascin-C fail to spread, and cells also fail to spread on substrata formed from mixtures of tenascin-C and fibronectin, or on fibronectin-coated substrata in the presence of soluble tenascin-C (2-7). The adhesion modulating properties of tenascin-R (8,9) and tenascin-X (10-12) are also well known.

Tenascin-W is the most recently discovered member of the tenascin gene family. Its expression during development is largely limited to smooth muscle, bone and the stroma of certain tumors (13-16). The addition of tenascin-W to the medium over osteoblasts cultured on fibronectin prevents them from spreading, and when these cells are cultured on tenascin-W they remain rounded (15). Moreover, in transwell assays soluble tenascin-W promotes the migration of tumor-derived cell lines (16) and osteoblasts (17) across a fibronectin-coated filter. These results suggest that tenascin-W may share some of the anti-adhesive properties of other tenascins.

The tenascin-C knockout mouse was first reported to develop normally (18), but closer examination led to the identification of a number of developmental abnormalities and well as abnormal responses to trauma (1). Tenascin-C is upregulated in the granulation tissue at the borders of skin wounds (19) where it is associated with the migration and proliferation of myofibroblasts and epidermis. However, skin wounds have been reported to heal normally in the tenascin-C knockout mouse (20). We therefore speculated that in these mice tenascin-W, if it has anti-adhesive properties, might compensate for tenascin-C in healing wounds.

Proteins and antibodies. Fibronectin was isolated from medium conditioned by primary mouse embryonic skin fibroblasts. Medium (approximately 700 ml) from confluent 4th passage cultures was collected and concentrated 30 fold by precipitation with ammonium sulfate. The concentrated conditioned medium was dialyzed against Ca++/Mg++-free phosphate buffered saline (PBS) and applied to a 10 ml gelatin-Sepharose (Amersham/GE Health Care) column. The column was washed with 0.5 M urea in PBS, and fibronectin was eluted with 4M urea in PBS. The purified protein was dialyzed against PBS and sterilized by filtration through a 0.2 μm pore filter. Full length mouse recombinant tenascin-W was cloned, expressed and purified as described in Scherberich et al. (13). The rat anti-mouse tenascin-C monoclonal antibody (MTn-12) was characterized by Aufderheide and Ekblom (21), the rabbit polyclonal anti-mouse tenascin-W was characterized by Scherberich et al. (13), and the anti-tenascin-X rabbit polyclonal antibody was characterized by Matsumoto et al. (22). The mouse anti-vinculin monoclonal antibody was purchased from Sigma.

Substrata and cell culture. Tissue culture plastic dishes were coated with mouse fibronectin (5 μg/ml) or recombinant mouse tenascin-W (5 μg/ml or 10 μg/ml) diluted in serum-free Dulbecco's Modified Eagle's Medium (DMEM) for 90 min, rinsed in DMEM, blocked for 15 min with 1 mg/ml heat-inactivated bovine serum albumin (BSA), and rinsed 3X in DMEM. Control dishes were incubated in DMEM without proteins and then rinsed and blocked as described. C2C12 cells (23) (a gift from Dr. Zach Hall, National Institute of Neurological Disorders and Stroke, National Institutes of Health, Bethesda, MD) or mouse embryo fibroblasts (see below) were washed in DMEM with 10% fetal calf serum (FCS), rinsed in DMEM without serum, and a 250 μl aliquot was added to the coated substratum and the cells were incubated at 37oC. After 90 min tenascin-W diluted in warm DMEM was added to the medium of some of the cells being cultured on fibronectin-coated dishes (to a final concentration of 5 or 10 μg/ml); a similar amount of warm DMEM alone was added to the other cultures at this time as a control. After at total of 2 hr in culture the cells were fixed in 1% paraformaldehyde in DMEM for 30 min, then rinsed 3X in PBS and processed for immunocytochemistry. All experiments were conducted in triplicate.

Immunocytochemistry, photography and image analysis. After fixation and rinsing the cells were blocked overnight in PBS with 0.5% BSA at 4oC, permeabilized with 0.1% Triton X-100 for 5 min, and incubated in anti-vinculin (see above) and/or TRITC-labeled phalloidin (Sigma) for 1 hr. The cells were then rinsed and incubated in secondary antibody (Alexa 488-labeled goat anti-mouse; Invitrogen) for 45 min. Finally, the cells were rinsed in PBS containing DAPI (Sigma), rinsed and coverslipped. To measure cell areas, images of cells labeled with phalloidin were converted to high contrast, grayscale images and inverted. The number of black pixels was analyzed using Adobe Photoshop CS3 and converted to cell area by similarly analyzing a black square of a known size. Statistical differences (p < 0.05) were determined using a two-tailed t-test.

Fibroblast cultures and immunoblotting. Primary embryonic skin fibroblasts were isolated from 129/Sv mouse wildtype and TN-C knockout (20) embryos at embryonic day 15.5. The dissected skin was rinsed in Ca++/Mg++-free PBS, minced and digested in 5 ml 0.05% trypsin-EDTA (Gibco/Invitrogen) for 45 min at 37°C. The digestion was stopped by adding the same volume of DMEM containing 10% FCS. Large debris was removed by centrifugation and cells were collected. Primary fibroblasts were plated in 10 cm dishes (Falcon) in 10 ml DMEM/10% FCS and grown to confluency. Cells were passaged once a week and spontaneously immortalized as described in Brellier et al. (24). To study tenascin expression, conditioned medium was collected, separated by SDS-PAGE, transferred and immunostained as described previously (12). Equal loading and transfer was confirmed with amido black. The intensities of the immunostained bands were measured with ImageQuant TL (v2005). Each tenascin value then was normalized to the intensity of an anti-vinculin immunostained band.

Wound healing and immunohistochemistry. Handling of the animals before and during the experiments, as well as the experiments themselves, were approved and supervised by the Swiss Agency for the Environment, Forests and Landscape and the Veterinary Service of the Canton of Bern. In addition we followed the guidelines of INSERM and the Federation of Laboratory Animal Science Associations. To study wound healing in mice we adapted an incisional tail wound model based on a previous study (25). For immunoblot analysis the tail tips of 3 SL-129 mice were cut generating 5mm long fragments that were used as controls. These were compared with 5 mm long tail fragments from tenascin-C+/+ or tenascin-C-/- SL-129 mice that contained wounds that were allowed to heal for 1 day, 3 days or 10 days. All fragments were cut into small pieces with a scalpel and homogenized with a mortar and pestle in 400 µl of RIPA buffer. After 2 min of mixing, the solutions were centrifuged to remove debris. Samples were boiled in Laemmli sample buffer and stored at -20°C. For immunohistochemical analysis, wounded tail fragments like those described above were collected from tenascin-C+/+ mice (2 male, 1 female, aged 3-7 weeks) and from tenascin-C-/- mice (2 male, 1 female, aged 5 weeks) and fixed overnight in 4% paraformaldehyde in PBS. The tissues were then rinsed, incubated overnight at 4oC in 20% sucrose in PBS, and embedded in O.C.T. (Sakura). Frozen sections were collected on presubbed slides (Fisher). Dried slides were then rinsed, blocked in PBS with 0.5% BSA, and incubated overnight in MTn-12 (anti-tenascin-C), anti-tenascin-X and anti-mouse tenascin-W (see above). The next day the slides were rinsed, blocked and then incubated for 2 hr in a mixture of diluted Alexa 488 labeled-goat anti-rat secondary antibody and Alexa 594 labeled-goat anti-rabbit secondary antibody (Invitrogen). Slides were rinsed in PBS with DAPI, then rinsed, coverslipped and photographed.

The mouse myoblast cell line C2C12 has the potential to transdifferentiate into osteoblasts, a cell type that we have previously shown can bind to tenascin-W (13, 17). We selected C2C12 cells for this study because we found that these cells adhere to tenascin-W, yet they do not express tenascin-W in the absence of BMP2 (13) and they were used in an earlier study illustrating the anti-adhesive properties of tenascin-C (5). C2C12 cells cultured for 2 hr in the absence of serum on tissue culture plastic blocked with BSA will attach and spread, resulting in morphologically diverse multipolar cells with many small lamellae and short phalloidin-labeled stress fibers (Fig. 1A). In contrast, when these cells are cultured for 2 hr on tissue culture plastic coated with 5 μg/ml (~25 nM) of mouse fibronectin blocked with BSA they spread and form large lamellae as well as stress fibers ending in anti-vinculin labeled focal adhesion complexes (Fig. 1B). When cultured on 10 μg/ml (~50 nM) mouse tenascin-W blocked with BSA the C2C12 cells fail to spread and form lamellae. Instead, cells on tenascin-W are typically triangular or polygonal and have numerous small, actin-rich processes (Fig. 1C). Stress fibers are not seen, and the anti-vinculin stains the cytoplasm of these cells instead of the focal adhesion complexes seen when cells are cultured on fibronectin. On mixed fibronectin/tenascin-W substrata an intermediate morphology is usually observed: the C2C12 cells do not form large lamellae, but a few anti-vinculin-positive focal adhesion complexes are typically present (Fig. 1D). There were statistically fewer (p < 0.001) anti-vinculin-positive focal adhesions in C2C12 cells cultured on mixed substrata (8.5 ± 9.2, n = 11) than on fibronectin alone (26.7 ± 14.5, n = 10). The adhesion modulating effects of substratum-bound tenascin-W were also observed with soluble tenascin-W. When C2C12 cells were first allowed to attach and spread on fibronectin-coated substrata for 90 min and tenascin-W was then added to the medium for an additional 30 min prior to fixation and staining, the cells typically acquired the polygonal morphology and short actin-rich processes that were also observed with cells cultured on tenascin-W alone (Fig. 1E). 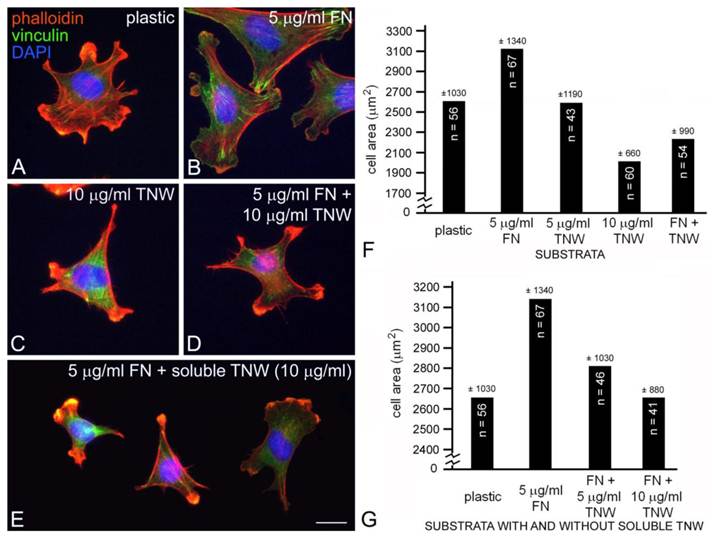 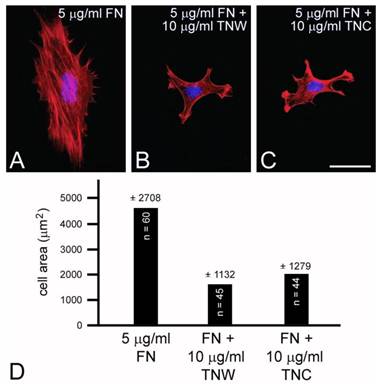 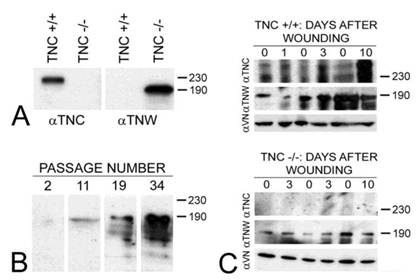 Tenascin-C and tenascin-W expression in healing wounds was confirmed by immunohistochemistry (A, B). Three days following an incision in the skin of a tenascin-C+/+ mouse tail, anti-tenascin-C (green) stains the early granulation tissue (gt) adjacent to the wound (A). Anti-tenascin-W (red) stains patches at the border of the epidermis (ep) and dermis (d; arrow); patchy staining was seen both near and far from the scab (s) and appears to coincide with the fibrous septum than runs from the epidermis to deeper connective tissue. In an unwounded tail, tenascin-C immunoreactivity is limited to the dermal-epidermal junction and the capsule around hair follicles (hf; inset). In a similar wound in the skin of a tenascin-C-/- mouse the anti-tenascin-W staining is unchanged (B). The expression of tenascin-X (red) in the tail wounds was also studied by immunohistochemistry (C, D). Tenascin-X is found in the epidermis (e), deep dermis and in structures associated with the hair follicles (hf), but it is not upregulated in the early granulation tissue (gt) of wild type or tenascin-C knockout mouse wounds. Scale bar = 100μm. 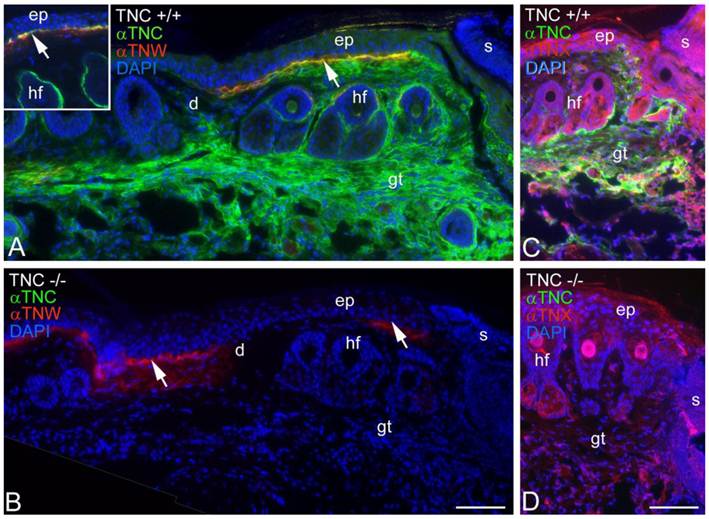 Our results show that tenascin-W shares the adhesion modulating properties of other members of the tenascin gene family. The molecular mechanisms underlying these properties remain unknown. Future studies should be directed to determining if tenascin-W can bind to fibronectin, and if it does, if it binds to the same region as tenascin-C. In addition, putative integrin binding domains have been identified in tenascin-W, and the integrins that recognize these sites and the signaling pathways mediated by these integrins need to be identified. Initial studies point to a conserved KGD motif playing a role in regulating the anti-adhesive properties of tenascin-W (17) and α8 integrins promoting tenascin-W mediated motility, at least in tenascin-W from mouse (14).