Top
Introduction
Novel findings and hypothesis
Implications of our findings and...
Acknowledgements
References

Background: A great number of in vitro and in vivo studies have suggested that many pathways or factors can stimulate angiogenesis and lymphangiogenesis, which facilitate tumor progression and metastasis. However, the morphological and immunohistochemical profile of newly formed vasculatures has not been elucidated, making it difficult to differentiate them from the pre-existing ones, and to identify their unique molecular profiles for diagnosis and therapeutic interventions.

Experimental findings: As cytokeratin (CK)-19 is a well-recognized stem cell marker and CK-19-positive cells are frequently detected in the peripheral blood of patients with metastatic cancer, our recent studies have assessed the involvement of CK-19 in the formation of new vasculatures in primary colorectal cancer (CRC) tissues. Our studies showed that a subset of lymph node-positive cases harbored some isolated normal epithelial structures with distinct CK-19 immunostaining within an otherwise CK-19-negative background. These structures are exclusively located within or adjacent to lymphoid follicles and are often surrounded by tube-like structures expressing lymphatic endothelial marker D2-40. Similar structures are more frequently seen at the junctions between pre-invasive and invasive CRC with the following features: (1). they consist of a single layer of endothelial cells that express both D2-40 and CD34, (2). their endothelial walls are often incomplete with disseminated cells protruding into the adjacent stroma, and (3). they are exclusively associated with disseminated CK-19-positive cells

Hypothesis: Based on these findings, we propose that these tube-like structures represent newly formed vasculatures, which are derived by the convergence of aberrant lymphocyte infiltration and tumor stem cells. Because of their close physical proximity, tumor stem cells within the epithelial and stromal components contribute equally and coordinately to the morphogenesis of new vasculatures, which constitutes the basis for the unique morphologic and immunohistochemical features of newly formed vasculatures. Our hypothesis appears to be applicable to all epithelium-derived cancers.

Colorectal cancer (CRC) is one of the most common human malignancies worldwide, and it is estimated that about 1,200,000 people are diagnosed with, and over 600,000 people die from, CRC annually [1]. Unfortunately, both the incidence and mortality of CRC in the developing countries, including China, have risen linearly during the past 10-years [2-3]. Based on the geographic trends, the world annual incidence of CRC could exceed more than 2.2 million cases within the next 20-years [1]. Colorectal carcinogenesis is believed to be a multi-stage process originating from a localized adenoma that linearly progresses to an intra-mucosal carcinoma, to an invasive lesion, and to metastatic cancer [4-6]. Over 90% of CRC-related mortality results from cancer metastasis. The five-year survival rate is greater than 75% for patients with non-metastatic disease, but is about 10% in patients with metastatic CRC [7-9]. Consequently, the early detection of CRC patients at risk to develop metastatic disease for early aggressive interventions could lead to improved prognosis and reduce treatment-related costs.

CRC metastasis is believed to be a multi-stage process, progressing sequentially from initial dissociation from the primary site, to intravasation, to circulation, to extravasation, to migration, and to colonization in new sites [10-12]. As tumor cell dissociation and intravasation are absolutely required for the initiation of the metastatic cascade, great efforts have been made to identify the underlying mechanism associated with these events. It has been suggested that cancer cells not only can intravasate into pre-existing vasculatures, but also can actively induce the formation of new vasculatures [13]. A number of factors, including vascular endothelial growth factor-C (VEGF-C) and VEGF-D, hepatocyte growth factor, angiopoietin-1, platelet derived growth factor-BB, insulin-like growth factors 1 and 2, fibroblast growth factor-2, chronic inflammation, podoplanin, and macrophages, have been reported to promote endothelial cell proliferation, angiogenesis, migration, and survival via a number of pathways [13-37]. These pathways include the VEGF-A/VEGFR-2, extracellular signal-regulated kinase 1/2, phosphatidylinositol 3-kinase/AKT, and the c-Jun NH2-terminal kinase ½ pathways [13-37].

None of these studies, however, has provided comparative morphological or immunohistochemical data that differentiate the newly formed vasculatures from pre-existing ones. Consequently, the molecular and biochemical profile of newly formed vasculatures is unknown, making it difficult, if not impossible, to identify and isolate unique molecules expressed in these structures for clinical applications. More importantly, the epithelium, which is the histological origin of cancer, is normally devoid of lymphatic ducts and blood vessels. In addition, all normal and pre-invasive cancer cells are conjoined by intercellular junctions and surface adhesion molecules and are also physically separated from vascular structures by a dense tumor capsule (the basement membrane). Therefore, invasion and metastasis initiating cells have to cross the capsule wall and escape into the stroma as individual cells or small cell clusters in order to intravasate pre-existing vasculatures or to induce the formation of new vasculatures. The detailed mechanisms of these events, however, have not been elucidated in human tissues.

Based on studies of human breast and prostate cancer, we have proposed a novel hypothesis that tumor invasion and metastasis result from the convergence of an injury to the epithelial capsule, the immune response to the injury, and the presence of tumor stem cells within the capsules at the site of injuries [38-50]. As epithelial cells are normally contained within capsules, focal degeneration of the capsule due to age or disease attracts lymphocyte infiltration, which degrades the degenerating capsule resulting in the formation of a focal disruption. If epithelial cells overlying the disruption are terminally differentiated, no or minimal proliferation will occur and the capsule will be repaired. If the disruption occurs in the capsule underlying undifferentiated progenitor or tumor stem cells, however, these cells are afforded the opportunity to proliferate leading to their “budding” from the disruption and subsequent growth into the stroma [38-50]. Once proliferating cell buds are formed, their interaction with infiltrated lymphocytes gives rise to an early pathway for metastasis. Specifically, as lymphocytes infiltrate tumor buds, they disrupt the intercellular junctions and surface adhesion molecules causing the dissociation of some cells from the bud. During this process, tumor cells and lymphocytes can form stable pairings as tumor-lymphocyte chimeras (TLCs). This perilous coupling allows tumor stem cells to avail themselves of the lymphocyte's natural ability to migrate, to breach cell barriers, and to intravasate into vascular structures. Theses facilitate their travel to distant organs where the pair can extravasate, providing the potential seed of a metastatic lesion. Our hypothesis has been recognized as more compatible with existing experimental evidence than the traditional “protoelytic enzyme” theory [51].

As only stem cells retain the potential for unlimited proliferation and multi-lineage differentiation in the adult organs, and that tumor-infiltrating immune cells are major factors to stimulate angiogenesis and lymphangiogenesis, we have speculated that the formation of new vasculatures is mediated by the convergence of stem cells budding and lymphocyte infiltration. To validate our speculation, we have compared the pattern and frequency of cell budding and vascular structures between age- and type-matched CRC with (N=37) and without (N=55) positive lymph nodes. These cases were retrieved under an IRB-approved protocol (#2008001) from the Nanjing Municipal Hospital of Nanjing University of Traditional Chinese Medicine (TCM), China. The main clinical parameters of patients and tumors were listed in Table 1. The reasons to select CRC as the study target are three-fold: (1) the colonic tissues share a similar structural profile with other epithelial tissues [52], (2) colorectal carcinogenesis is believed to share the same mechanism and progression process with other cancers [4-6], and (3) colon tissues harbor the highest concentration of immune cells, but have the highest rate of metastasis [53-57].

Main clinical features of samples used in the study.

As CK-19 is a well-recognized stem cell marker and CK-19-positive cells are very frequently detected in the peripheral blood of patients with metastatic cancer [58-63], our studies have assessed the involvement of CK-19 in the formation of new vasculatures. Using double immunohistochemistry, our studies showed that a subset of lymph node-positive cases harbored isolated normal epithelial structures with distinct CK-19 immunostaining within an otherwise CK-19-negative background. As shown in Figure 1, these structures are exclusively located within or adjacent to lymphoid follicles with marked alterations in cell density, size, shape, and nuclear structures, and with significantly increased lymphatic duct density, compared to their adjacent CK-19-negative counterparts.

As shown in Figure 6, all tube-like structures with CK-19-positive cells co-express D2-40 and CD34, but an adjacent vein without disseminated cells are negative for D2-40 and only express CD34.

Together, our findings suggest that these tube-like structures are newly formed vasculatures derived from the following pathways depicted in Figure 7, which is a composite taken from figures 2 and 3: 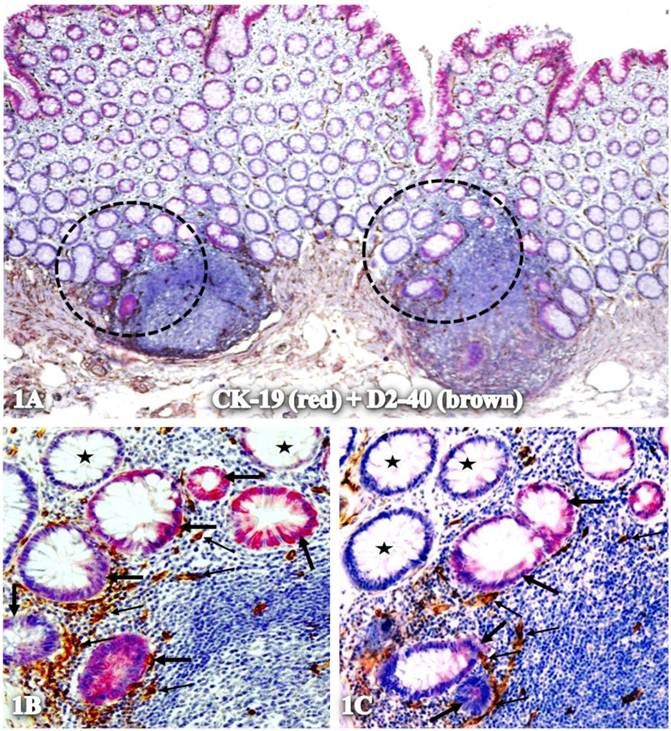 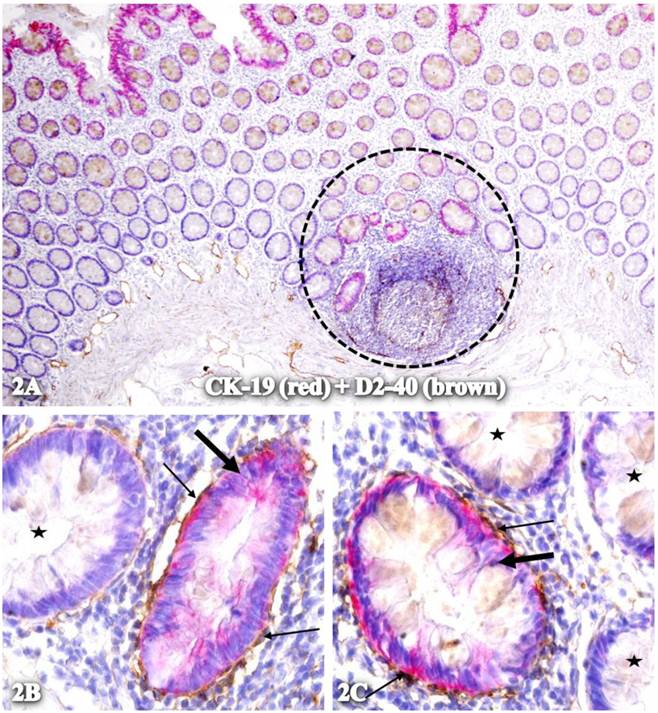 Plasma membrane conjunction of CK-19-positive cells and elongated cells with D2-40 expression. A CRC section was double immunostained for CK-19 (red) and D2-40 (brown). The circle in A identifies the low magnification view of the structure in B. Thick and thin arrows identify CK-19- and D2-40-positive cells, respectively. A: 80X. B: 400X. 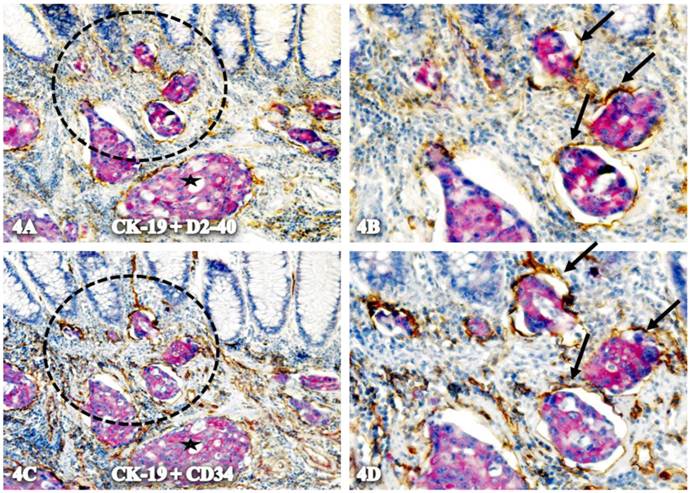 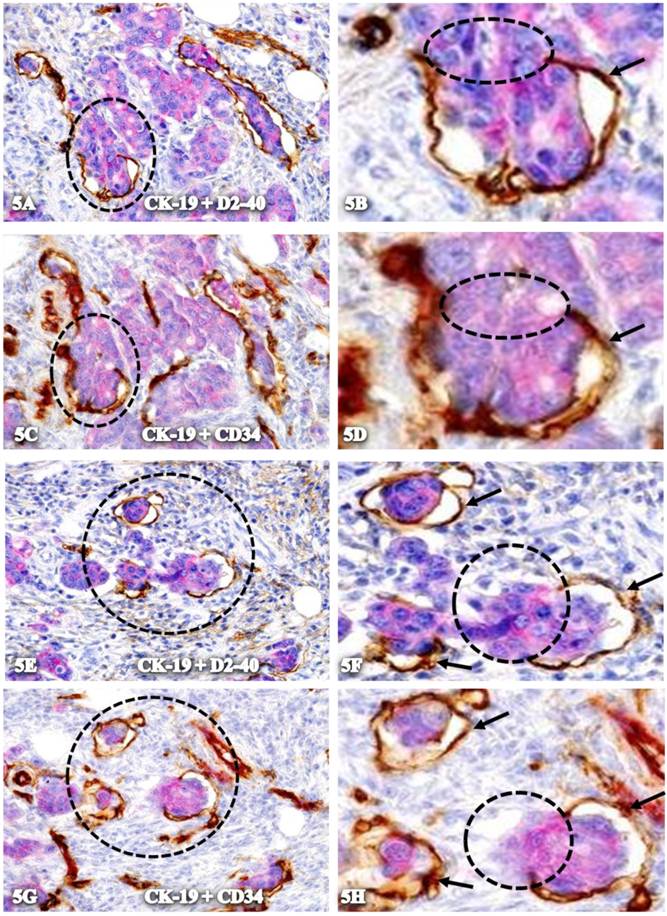 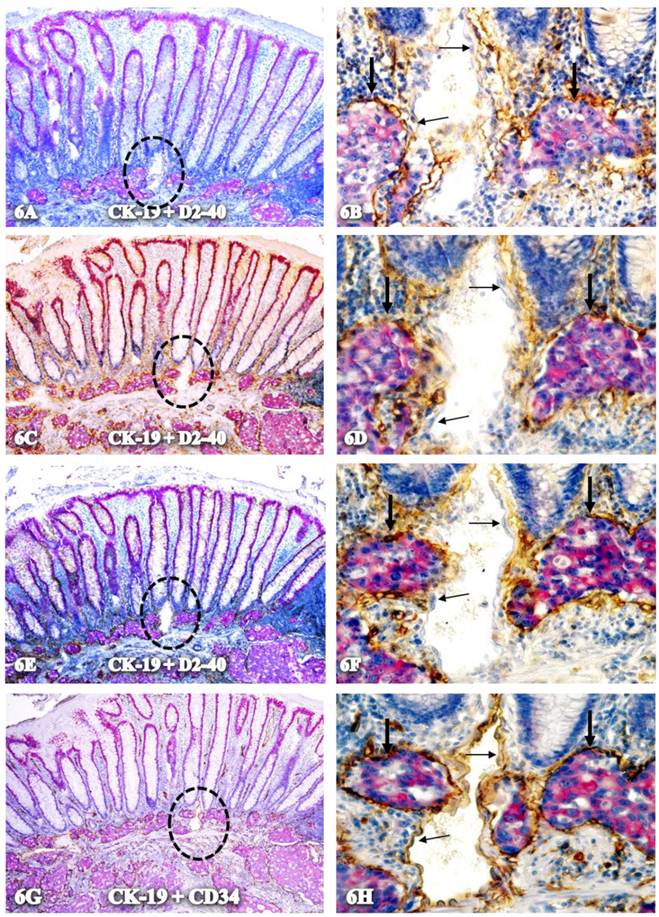 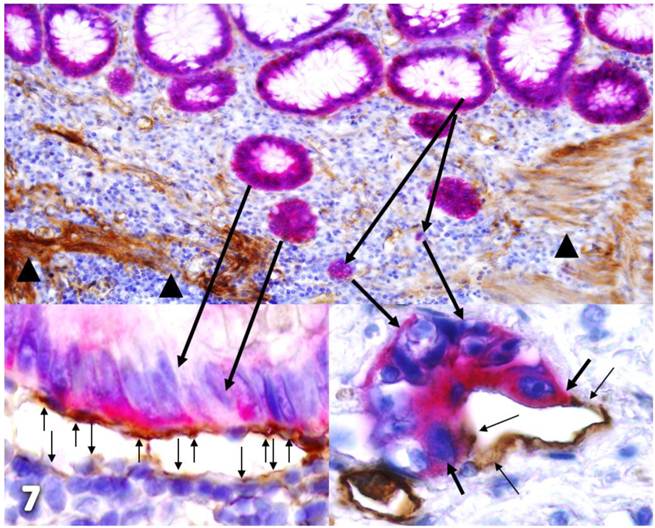 Implications of our findings and hypothesis

To the best of our knowledge, this is the first report to describe the hypothesized morphological and immunohistochemical features of newly formed vasculatures based on our novel findings from human clinical tumor samples. It is not known why such or similar findings have not been previously reported. It is our speculation that the most likely reason might be that these alterations, especially the co-expression of D2-40 and CD34, can be seen only in double immunostained tissue sections, whereas double immunohistochemistry is barely used in the clinical laboratories. These novel findings have led us to propose that newly formed vasculatures are derived from the convergence of lymphocyte infiltration and stem cells in both the epithelial and stromal components. Due to their close physical proximity, stem cells within the epithelium and stroma equally and coordinately contribute to the formation of new vasculatures, which provides the basis for the unique morphological and immunohistochemical features that differentiate them from their pre-existing counterparts.

If confirmed, our findings and hypothesis will provide, for the first time, a morphologically defined structure of newly formed vasculatures, a tube-like structure with co-expression of D2-40 and CD34, which may have significant scientific and clinical implications. Scientifically, as these structures appear to be exclusively associated with stem cells within both the epithelial and stromal components, identification of these structures may significantly benefit the study of stem cell biology. The isolation and identification of the unique molecules associated with these structures may lead to the development of more effective therapeutic agents to specifically target these structures. Clinically, as these tube-like structures with disseminated cells are exclusively or predominantly seen in node-positive cases, the presence or absence of these structures within the primary tumor may represent a reliable predictor for the metastatic potential of a given CRC. Thus, morphological and immunohistochemical assessment of the biopsy samples of a given CRC patient before the operation may substantially benefit the decision making process for both the surgical approach and the selection of treatment options. In addition, as aberrant lymphocyte infiltration appears to be a trigger for colorectal carcinogenesis and progression, systemic or localized administration of anti-inflammatory agents to the high risk population of CRC patients may have significant preventative value.

This study was supported in part by grants 200601060, 201108004 from Science and Technology Bureau of Nanjing, ZKX11004from Health Bureau of Nanjing, LZ11105 from Jiangsu Province Bureau of Traditional Chinese Medicine to Jiang Bin. This study was also supported in part by grants 2008-02 from the US Military Cancer Institute and Henry M. Jackson Foundation and 2006CB910505 from the Chinese Ministry of Science and Technology to Yan-gao Man and Xichen Zhang, by Merit Award ONCA-037-10F from the Veterans Health Administration awarded to Jeffrey Mason, and by RO1-DE12880 from NIDCR-NIH to Anahid Jewett.

14. Cueni LN, Detmar M. New insights into the molecular control of the lymphatic vascular system and its role in disease. J Invest Dermatol. 2006;126:2167-77