The adult mammalian intestine has long been used as a model to study adult stem cell function and tissue renewal as the intestinal epithelium is constantly undergoing self-renewal throughout adult life. This is accomplished through the proliferation and subsequent differentiation of the adult stem cells located in the crypt. The development of this self-renewal system is, however, poorly understood. A number of studies suggest that the formation/maturation of the adult intestine is conserved in vertebrates and depends on endogenous thyroid hormone (T3). In amphibians such as Xenopus laevis, the process takes place during metamorphosis, which is totally dependent upon T3 and resembles postembryonic development in mammals when T3 levels are also high. During metamorphosis, the larval epithelial cells in the tadpole intestine undergo apoptosis and concurrently, adult epithelial stem/progenitor cells are formed de novo, which subsequently lead to the formation of a trough-crest axis of the epithelial fold in the frog, resembling the crypt-villus axis in the adult mammalian intestine. Here we will review some recent molecular and genetic studies that support the conservation of the development of the adult intestinal stem cells in vertebrates. We will discuss the mechanisms by which T3 regulates this process via its nuclear receptors.

Organ homeostasis and tissue repair is dependent upon organ-specific adult stem cells. When needed, the adult stem cells proliferate and their offspring subsequently differentiate to replace the cells lost physiologically or due to tissue damage. Because of the obvious potential medical applications, extensive studies have been carried out on the properties and functions of various adult stem cells. One of the best-studied models for adult stem cells is the vertebrate intestine. Throughout adult life, the intestinal epithelium, the tissue responsible for the main physiological function of the intestine, is constantly renewed. In mammals, the stem cells located in the crypts proliferate and their offspring then differentiate as they migrate up along the villus/crypt axis to replace the fully differentiated cells undergoing physiological apoptosis or programmed cell death near the tip of the villus. This allows the entire intestinal epithelium to be replaced once every 1-6 days [1-3]. A similar self-renewing system exists in other vertebrates as well. In the case of metamorphosing amphibians such as Xenopus laevis, the epithelium is self-renewed every 2 weeks or so [4].

While extensive studies have been done to characterize the adult stem cells in the mammalian intestine [3, 5-7], there is only limited information on their formation during development. In mammals, the maturation of the intestine takes place around birth [6-9], a period termed post-embryonic development when plasma thyroid hormone (T3) concentrations are high [10]. Interestingly, this postembryonic period resembles the T3-dependent amphibian metamorphosis [10] when the larval intestine transforms into the frog intestine in a process involving de novo formation of the intestinal stem cells [6, 8, 11]. Here we will review some recent findings on the regulation of the adult intestinal stem cell formation by T3.

In mammals, a functional intestine is formed during embryogenesis. The intestine, however, undergoes extensive maturation around birth to form the adult intestine [6, 7, 9]. During mouse embryogenesis, villus formation begins around embryonic day 14.5 (E14.5) but crypt formation and the establishment of the mature villus-crypt axis, where the adult stem cells are localized in the crypts, take place in the first 3 weeks after birth [6, 7, 9]. In Xenopus laevis, arguably the best studied amphibian species, a functional intestine is formed at the end of embryogenesis in a feeding tadpole [11]. The tadpole intestine has a much simpler structure than the frog intestine. In premetamorphic tadpoles, the intestine is made of mostly a single layer of larval epithelial cells, with little surrounding connective tissue and muscles except in the typhlosole, the single epithelial fold in the tadpole intestine [11] (Fig. 1). During metamorphosis, the larval epithelial cells undergo programmed cell death or apoptosis and concurrently, adult epithelial progenitor cells are formed de novo and rapidly proliferate [6, 8, 11-13]. These cells express strongly the typical markers, such as LGR5 (Fig. 2) [14], which are expressed in the mammalian adult intestinal stem cells (and thus for simplicity, we will refer them as adult stem cells or progenitor cells interchangeably). Subsequently these cells differentiate to form a multiply folded adult epithelium with elaborate connective tissue and muscles (Fig. 1). While there is no further formation of the crypt-villus axis along the epithelial folds, the frog trough-crest axis of the epithelial folds formed by the end of metamorphosis, with the adult stem cells eventually restricted to the trough of the fold, resembles the crypt-villus axis in adult mammals.

Intestinal remodeling during Xenopus laevis metamorphosis as a model to study adult organ-specific stem cell development in vertebrates. In premetamorphic tadpoles at stage 51, the intestine has only a single fold, the typhlosole, and is structurally similar to the mammalian embryonic intestine. At the metamorphic climax around stage 61, the larval epithelial cells begin to undergo apoptosis, as indicated by the open circles. Concurrently, the proliferating adult progenitor/stem cells are developed de novo from larval epithelial cells through dedifferentiation, as indicated by black dots. By the end of metamorphosis at stage 66, the newly differentiated adult epithelial cells form a multiply folded epithelium, similar to mammalian adult intestines. 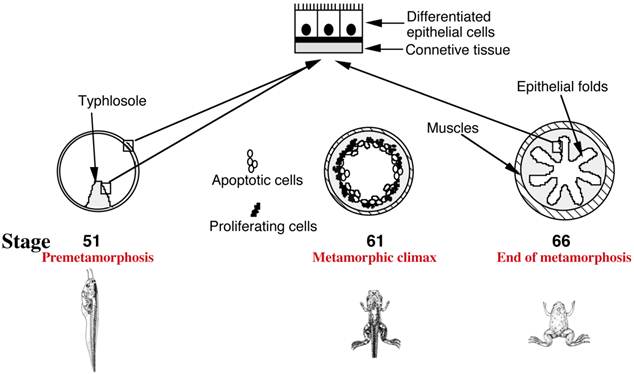 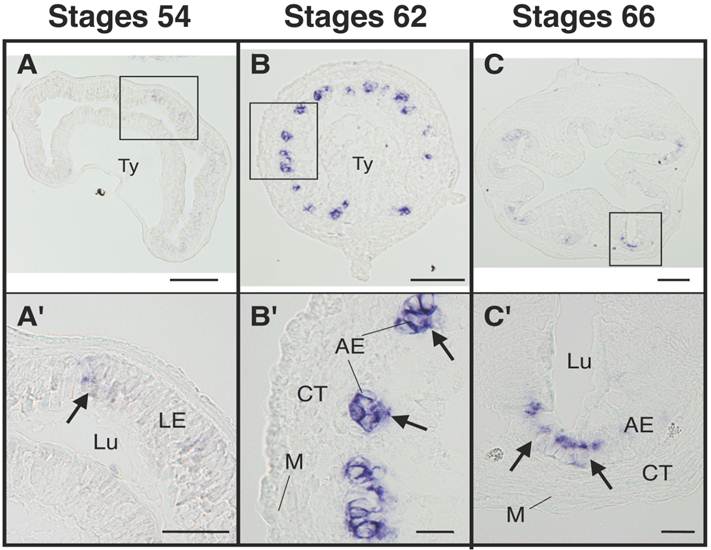 To determine the origin of the adult stem/progenitor cells, we have recently made use of the ability to induce intestinal metamorphosis in organ cultures with T3 treatment and the existence of a transgenic frog line expressing GFP ubiquitously. We isolated intestine from premetamorphic transgenic tadpoles as well as wild type siblings and separated the epithelium from the rest of the intestine (the non-epithelium). We recombined epithelium derived from wild type or GFP-expressing transgenic tadpoles with the non-epithelium from either wild type or GFP-expressing transgenic tadpoles. We treated the cultures with T3 to induce metamorphosis, leading to the formation of adult progenitor/stem cells after 5 days and eventually adult epithelium after longer treatment. We showed that GFP-labeled adult stem cells and GFP-labeled differentiated adult epithelium were formed only when the epithelium used for the recombinant organ cultures was derived from transgenic tadpoles expressing GFP [12], indicating that the intestinal progenitor/stem cells originate from the larval epithelium, likely through T3-induced dedifferentiation of some larval epithelial cells.

Similarly, T3 appears to play a critical role in the development of mammalian adult intestinal stem cells. As indicated above, intestinal maturation occurs around birth in mammals when plasma T3 levels are high, just like during amphibian metamorphosis. In mouse, this corresponds to the first 3 weeks after birth with plasma T3 level peaks around 2 weeks after birth [18]. T3 or T3 receptor (TR, see below) deficiency leads to reduction in the number of epithelial cells along the crypt-villus axis and abnormal intestinal morphology [19-23], arguing that proper T3 signaling is important for adult stem cell formation.

Mechanism of gene regulation by T3

T3 functions mainly by regulating gene expression via its nuclear receptors or TRs. T3 can both activate and repress target gene expression. Most studies on T3 have been on genes induced by T3. In vitro and in vivo studies by using reporter genes have shown that TRs mainly function as heterodimers with 9-cis retinoic acid receptors (RXRs) to bind to T3 response element (TRE) in T3 inducible target genes [24-27]. In the absence of T3, TR/RXR represses target genes by recruiting corepressor complexes that contain histone deacetylases while when T3 is present, liganded TR/RXR recruits coactivator complexes containing various histone modification enzymes and chromatin remodeling proteins to alter local chromatin and activate transcription [25, 28-36]. Importantly, we and others have shown that during Xenopus laevis development, unliganded TR/RXR binds to target genes in premetamorphic tadpoles and recruits corepressor complexes, which are important to regulate the timing of metamorphosis [36-39]. On the other hand, liganded TR is required to recruit coactivators to the endogenous target genes during metamorphosis to activate their expression and induce metamorphosis [36, 40-53].

A number of studies have shown that the T3-dependent recruitment of various cofactor complexes correlates with local histone modifications, particularly acetylation and methylations, and gene regulation at target genes during metamorphosis [36-39, 47, 49-56]. In addition to histone modifications, gene activation by liganded TR in the frog oocyte transcription system, where the DNA is chromatinized, also leads to chromatin disruption [57-59], resulting in a loss of up to 3 nucleosomes per receptor binding locus [58]. Such nucleosome removal by liganded TR may be mediated by the recruit chromatin remodeling complexes containing Brg1 and BAF57 to the TRE of the reporter gene [60, 61]. Interestingly, both Brg1 and BAF57 are expressed during intestinal metamorphosis in Xenopus laevis [61], suggesting that similar nucleosome removal occurs during intestinal metamorphosis. Indeed, we have recently shown that in Xenopus tropicalis, a species highly related to Xenopus laevis, gene activation by T3 causes the loss of core histones at TR target genes both during natural and T3-induced intestinal remodeling [55]. Thus, T3 regulates target gene transcription during intestinal stem cell development via both histone modifications and nucleosomal removal to facilitate the recruitment of transcriptional machinery (Fig. 3).

The total dependence on T3 of intestinal metamorphosis in amphibians offers a means to identify genes likely involved in adult stem cell development. We and others have previously isolated genes that are regulated by T3 in the intestine of Xenopus laevis [62-66]. In particular, genome-wide microarray studies have identified many genes and signaling pathways whose regulation correlates with stem cell development and larval cell death during intestinal metamorphosis [63, 65]. Interestingly, a comparative study found that among the genes that are highly upregulated in the intestine (7 fold or more) at the climax of metamorphosis (stage 61) compared to pre- or end of metamorphosis, most of the homologous genes in mouse (19 out of 27 analyzed) have their peak levels of expression in the intestine within the first 2 weeks after birth [65], when the mouse intestine matures into the adult form. These findings suggest that similar T3-dependent gene regulation programs function in the formation of the adult intestinal stem cells in both amphibians and mammals.

A model for gene regulation by TR. T3 functions by regulating gene transcription through T3 receptors (TRs). In the absence of T3 (as in premetamorphic tadpole), TR forms heterodimers with RXR (9-cis retinoic acid receptor) and the heterodimer binds to the T3 response elements (TREs) in the target genes to repress their expression by recruiting corepressor complexes containing histone deacetylases. When T3 is present, the corepressor complexes are released and the liganded TR/RXR recruits coactivator complexes containing histone acetyltransferases and histone methyltransferases such as PRMT1 (protein arginine methyltransferase 1). The coactivator complexes will modify histones or cause the removal of nucleosomes, leading to the activation of gene expression. Based on [55]. 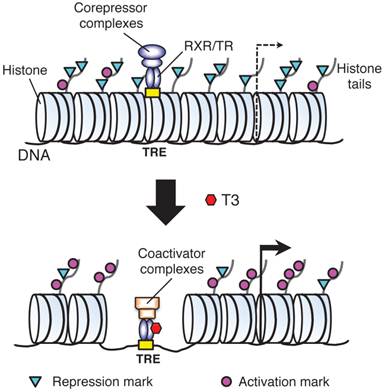 Among the genes upregulated during intestinal metamorphosis is protein arginine methyltransferase 1 (PRMT1) [49, 67], which functions as TR-coactivator. PRMT1 is highly expressed in the adult progenitor/stem cells but not in larval or adult differentiated epithelial cells [68]. Transgenic overexpression of PRMT1 leads to increased adult progenitor/stem cells, while knocking down the endogenous PRMT1 expression reduces these cells, arguing that PRMT1 is important for the formation and/or proliferation of the adult progenitor and/or stem cells [68].

Interestingly, when PRMT1 expression was analyzed during mouse and zebrafish development, a similar spatiotemporal pattern was observed [68]. That is, little PRMT1 expression was detected in the larval/neonatal intestine in zebrafish or mouse when plasma T3 levels were low. During the transition to the adult intestine when T3 levels were high, PRMT1 was upregulated in the presumptive developing adult stem cells. These findings suggest that the embryonic/neonatal mouse or zebrafish intestinal stem cells are molecularly distinct from those in the adult intestine and that the formation of the adult intestinal stem cells may utilize conserved mechanisms, such as the dependence on T3 and involvement of PRMT1, during vertebrate development. PRMT1 upregulation thus represents the first reported molecular events during mouse or zebrafish adult stem cell development.

This research was supported in part by the National Natural Science Foundation of China No.30870113 and the Intramural Research Program of NICHD, NIH.

48. Schreiber AM, Mukhi S, Brown DD. Cell-cell interactions during remodeling of the intestine at metamorphosis in Xenopus laevis. Dev Biol. 2009;331:89-98

57. Wong J, Shi YB, Wolffe AP. A role for nucleosome assembly in both silencing and activation of the Xenopus TR beta A gene by the thyroid hormone receptor. Genes Dev. 1995;9:2696-2711