Gadd45b is a Novel Mediator of Neuronal Apoptosis in Ischemic Stroke

Apoptosis plays an essential role in ischemic stroke pathogenesis. Research on the process of neuronal apoptosis in models of ischemic brain injury seems promising. The role of growth arrest and DNA-damage-inducible protein 45 beta (Gadd45b) in brain ischemia has not been fully examined to date. This study aims to investigate the function of Gadd45b in ischemia-induced apoptosis. Adult male Sprague-Dawley rats were subjected to brain ischemia by middle cerebral artery occlusion (MCAO). RNA interference (RNAi) system, which is mediated by a lentiviral vector (LV), was stereotaxically injected into the ipsilateral lateral ventricle to knockdown Gadd45b expression. Neurologic scores and infarct volumes were assessed 24 h after reperfusion. Apoptosis-related molecules were studied using immunohistochemistry and Western blot analysis. We found that Gadd45b-RNAi significantly increased infarct volumes and worsened the outcome of transient focal cerebral ischemia. Gadd45b-RNAi also significantly increased neuronal apoptosis as indicated by increased levels of Bax and active caspase-3, and decreased levels of Bcl-2. These results indicate that Gadd45b is a beneficial mediator of neuronal apoptosis.

Ischemic stroke is one of the leading causes of death and long-term disability worldwide. Considering the essential role of apoptosis in the pathogenesis of ischemic stroke, a more detailed understanding of the mechanisms involved will have a substantial effect in the optimization and development of treatment strategies. Subsequent to acute ischemic stroke, an early response emerges in the gene expression of key modulators of apoptosis, such as the Bcl-2 family. The release of pro-apoptotic proteins from the mitochondria induces the activation of caspases and other genes that aggravate apoptotic cell death [1,2].

Growth arrest and DNA-damage-inducible protein 45 beta (Gadd45b) is originally recognized as an important factor in DNA repair, apoptosis, cell survival, growth arrest, and possibly DNA demethylation. Several studies on non-neuronal cells have suggested Gadd45b as an anti-apoptosis gene [3,4]. Gadd45b was identified as an intrinsic neuroprotective molecule in retinal ganglion cells [5,6]. It's not clear whether Gadd45b was involved in apoptosis induced by ischemic stroke. This study aims to evaluate the effects of Gadd45b downregulation in neuronal apoptosis after cerebral ischemia.

Adult male Sprague-Dawley (SD) male rats (230-300g) were purchased from the Experimental Animal Center of Chongqing Medical University. Rats were group housed (five rats per cage) in quiet in a room maintained at 21-22 °C on a 12/12-h light/dark cycle, and allowed free access to food and water during the study. All animal procedures were reviewed and approved by the Institutional Animal Care and Use Committee at the Chongqing Medical University and were performed strictly in accordance with the “Guiding Principles for Research Involving Animals and Human Beings”.

To induce transient focal cerebral ischemia in rats, middle cerebral artery occlusion (MCAO) surgery was performed as described previously [7]. Rats were anesthetized using 3.5% chloral hydrate (350 mg/kg, ip) and right common carotid artery (CCA) was surgically exposed by a midline neck incision. Right CCA was ligated distally and external carotid artery (ECA) was ligated proximally to ECA and internal carotid artery (ICA) bifurcation. A 30 mm length of nylon filament (diameter 0.25±0.03mm) was gently inserted into the lumen of ICA from right ECA. Afterwards, reperfusion was established by withdrawal of the nylon filament at 2 h after ischemia. In the sham group, rats underwent the same surgical procedures without occlusion of the right CCA. Rats were then returned to their cages and body temperature were kept at (37±0.5) °C.

Green fluorescent protein (GFP) was observed in brain section under a fluorescence microscope for the detection of virus delivery. To determine the proper therapeutic titer, Gadd45b mRNA and protein expression was examined through real-time PCR and immunohistochemistry. The most appropriate therapeutic titer was used in the following study.

The rats were killed 24 h after reperfusion, and the brains were quickly removed by neck breaking to collect the cerebral cortex for immunohistochemistry, Western blot analysis, real-time PCR and TTC staining.

Rats were anesthetized using 3.5% chloral hydrate (350 mg/kg, ip) 24 h after MCAO. Paraffin sections were prepared as previously described [8]. In brief, sections (n=5 for each group) were incubated with primary antibodies (rabbit anti-Gadd45b, 1:80; rabbit anti-BDNF, 1:200; rabbit anti-Bax, 1:100; and rabbit anti-Bcl-2, 1:100; all from Santa Cruz, USA) overnight at 4 °C. Afterwards, sections were blocked with normal serum for 30 min at 37 °C. Then, the samples were incubated with goat anti-rabbit IgG for 30 min at 37 °C. Positive activity was revealed with diaminobenzidine. Confocal images were taken with a Nicon microscope. Gadd45b, BDNF, Bax and Bcl-2 expression were quantified using NIH ImageJ software. Immunopositive cells were quantified in sequential fields of 1 mm2 at ipsilateral ischemic penumbra in five animals selected randomly from each group. The number of neurons per field for each sample was the average of 20 consecutive objects in 4 sections/case by an investigator who was blinded to this study.

LV delivery efficacy and inhibition efficiency. Three different titers of LV-shGadd45b were injected 7 d before MCAO through stereotactic surgery. (A) A few GFP-positive cells were localized in the cortex and hippocampus injected with low-titer LVs. A large number of GFP-positive cells were observed in the cortex and hippocampus injected with medium- and high-titer LVs. (B) Gadd45b-shRNA treatment effectively suppressed MCAO-induced Gadd45b expression. Data were expressed as fold of sham. (C) Immunohistochemistry for Gadd45b (original magnification 400×). Images are taken from ipsilateral ischemic penumbra. (D) The bar graph reflects the Gadd45b-positive cells in each group. (*p<0.01, compared with sham group, #p<0.01, compared with LV-shGadd45b group). 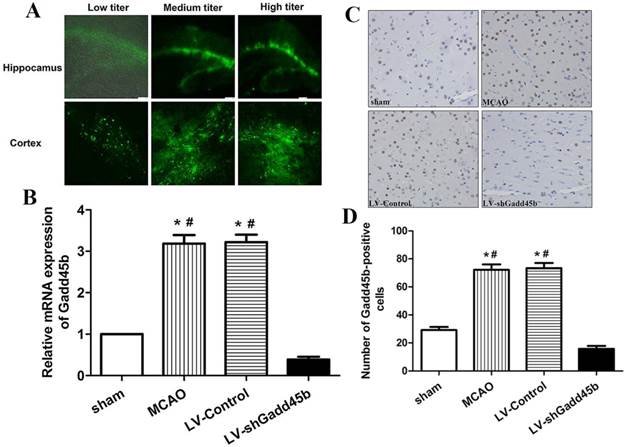 The rats were euthanized under anesthesia 24 h after reperfusion. The brains were rapidly removed. Coronal sections (n=6 in each group) were cut into 2 mm thick slices and stained with standard 2% TTC for 20 min at 37 °C. The pale-appearing infarcted areas and areas of the uninfarcted hemispheres were digitally analyzed using NIH Image J software. The area of infarction from each slide was added and presented as a percentage of the volume of the uninfarcted hemisphere.

TUNEL staining was done on brain section to detect cell apoptosis according to the manufacturer's protocol of an in situ cell death detection kit (Roche, Basel, Switzerland). TUNEL-positive cells were quantified by individual counts in sequential fields of 1 mm2 at ipsilateral ischemic penumbra in five rats selected randomly from each group. The TUNEL-positive cell number per field for each sample was the average of 20 consecutive objects in 4 sections/case by an investigator who was blinded to the studies.

The titer of LV used was 6.9×108 pfu/ml. The titers of LV were categorized as 1.38×109 pfu/ml (high titer), 6.9×108 (medium titer), and 3.45×108 (low titer). The three titers were able to successfully transfect ipsilateral ischemic penumbra and ipsilateral hippocampus in the rat brains. Delivery efficacy was shown by GFP-positive cells. The transfection efficiency of medium and high titer injections were similar, and better than the efficiency of the low-titer group (Figure 1A).

Gadd45b-RNAi treatment increased infarct size and worsened the neurological behavior at 24 h after reperfusion. (A) TTC staining of the brain. (B) The bar graph reflects the infarct volume in each group. (C) Determination of neurological deficits. (*p<0.01, compared with sham group, △p<0.05, compared with LV-shGadd45b group). 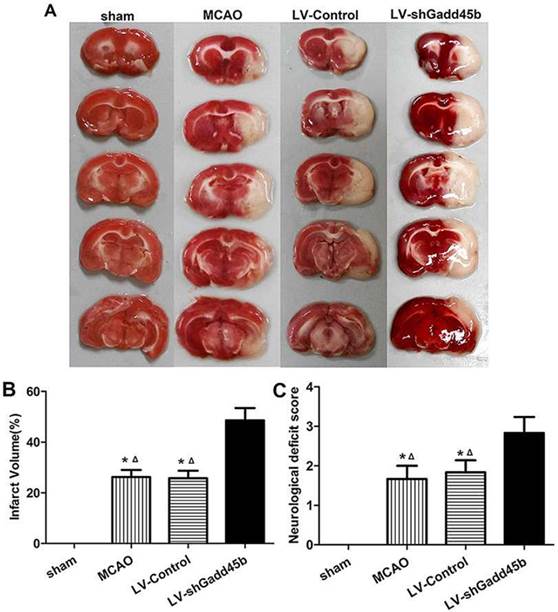 The apoptotic activity shown by TUNEL was a common method for detecting DNA fragmentation that results from apoptotic signaling cascades. A small number of TUNEL-positive cells were found in the sham-operated animals. In samples collected from the MCAO and LV-Control group, a large number and density of TUNEL-positive staining was found and further enhanced by Gadd45-RNAi treatment (Figure 3, p<0.01). 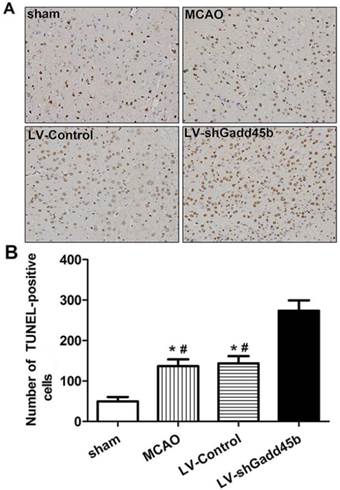 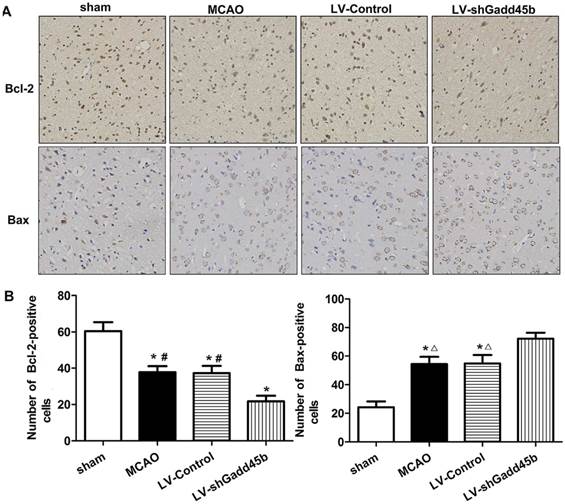 The aim of this study was to determine the role of Gadd45b on apoptosis during focal cerebral ischemia. In the present study, a previously unknown, intrinsic, anti-apoptotic molecule Gadd45b in ischemic brain was elucidated. Research on enhancing the neuroprotective function of Gadd45b may provide effective therapeutic strategies for preventing the death of the neurons in stroke.

Gadd45 is a highly conserved three-gene family consisting of Gadd45a, Gadd45b, and Gadd45g. Gadd45 has been identified as a stress-response gene to physiological or environmental conditions, and is originally induced by genotoxic agents [16]. Gadd45a has been demonstrated as a pro-apoptosis gene in neuronal injuries [17,18] and Gadd45b has been implicated as an anti-apoptosis factor. The present research showed that Gadd45b inhibits neuronal apoptosis after cerebral ischemia. Gadd45b is significantly involved in preventing RGC death [5,6], which is consistent with our findings regarding its anti-apoptotic role in neurons. Gadd45b also inhibits apoptosis in other cell types, such as NIH3T3 and INS-1Eb cells [19,20]. By contrast, Gadd45b was found to induce apoptotic death in cardiomyocytes [21], murine hepatocytes [22,23], and other cell types [24]. Accordingly, the function of Gadd45b in apoptosis appears to be cell type specific. Apoptosis occurs after acute ischemic stroke, and is regulated by the apoptotic and anti-apoptotic proteins of the Bcl-2 family. Pro-survival Bcl-2 proteins include Bcl-2 and Bcl-xL, as well as pro-apoptotic proteins including Bax, Bad, and Bak [25,26]. The relative amounts of active anti- and pro-apoptotic Bcl-2 family proteins determine the resistance of the cells to apoptosis. Increased Bcl-2 expression with a concurrent decrease of Bax mainly functions in protecting the brain against apoptosis induced by acute ischemic stroke [27]. Caspase-3 is also a well-identified pro-apoptotic executioner that is involved in apoptosis [28]. Several groups have provided evidence that activation of caspase-3 is involved in neurons undergoing ischemic cell death [29]. As demonstrated in the present study, Gadd45b down regulation increased brain damage following ischemic stroke. The increase in brain damage is associated with increased apoptosis as indicated by increased levels of Bax and active caspase-3, and decreased levels of Bcl-2. 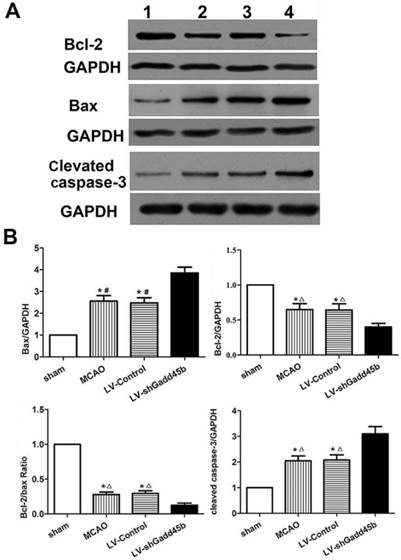 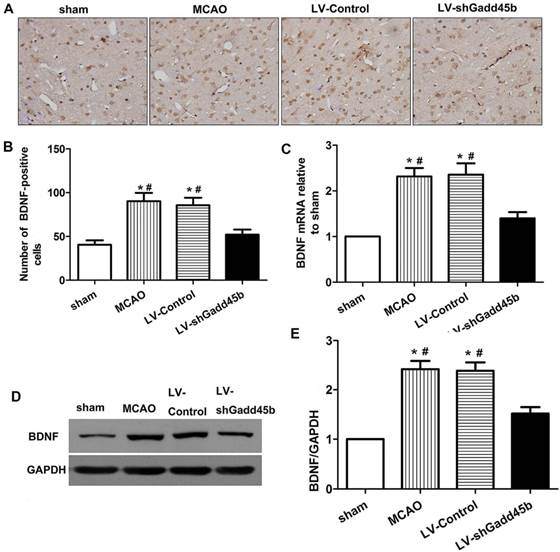 This work was supported by the Natural Science Foundation of China (Grant No. 81271306) and the Medical Science Research Project of Chongqing Municipal Health Bureau (2012-1-037).