Both viral infection and DNA transfection expose single-stranded or double-stranded DNA to the cytoplasm of mammalian cells. Recognition of cytosolic DNA activates a series of cellular responses, including induction of pro-inflammatory genes such as type I interferon through the well-known cGAS-STING pathway. Here we show for the first time that intracellular administration of either single or double stranded interferon stimulating DNA (ISD), but not poly(dA) suppresses cell growth in many different cell types. Suppression of cell growth by cytosolic DNA is cGAS/STING independent and associated with inhibition of glucose metabolism, ATP depletion and subsequent cellular energy stress responses including activation of AMPK and inactivation of mTORC1. Our results suggest that in concert with but independent of innate immune response, recognition of cytosolic DNA induced cellular energy stress potentially functions as a metabolic barrier to viral replication.

Cell growth and virus replication require energy supply. Glucose is the major fuel for most cells. Glucose metabolism is fundamental for intracellular energy supply and cell viability. Through glycolysis, one molecule of glucose produces two net molecules of ATP and NADH, and is metabolized into two molecules of pyruvate, part of which is converted into lactate under aerobic condition. Disruption of glucose metabolism, such as 2-deoxyglucose (2-DG) treatment, leads to ATP-depletion/AMP-accumulation and cell growth inhibition [1].

Alteration of glucose metabolism and AMPK activities by viral infection has been a long-term topic for decades [7, 8]. However, so far nothing is known whether viral DNA itself might affect host cells energy metabolism and AMPK mediated energy stress response. Notably, the role of viral DNA in host innate immune response has been well studied in recent years [9]. Transfection of purified DNA, like interferon stimulating DNA (ISD), has been widely used as a cellular model mimicking DNA viral infection to introduce exogenous DNA into the cytoplasm of host cells [10]. Recognition of these cytosolic DNA induces the expression of type I interferon, such as IL-6 and IFNbeta. Remarkably, cyclic GMP-AMP synthase (cGAS) binds to these cytosolic DNA and catalyzes the synthesis of cyclic-GMP-AMP (cGAMP), which binds to the adaptor protein STING and activates interferon regulatory factor 3 (IRF3) [11]. Either STING [12] or cGAS [13] knockout cells abolishes type I interferon induction in response to DNA transfection or DNA virus infection, demonstrating cGAS-STING axis is essential for cytosolic DNA induced innate immune response. Similarly, this DNA transfection based cellular model could also be an ideal one to investigate the role of viral DNA in virus-host metabolic interaction.

In this study, we show for the first time that recognition of cytosolic DNA potently attenuates glucose metabolism, leading to ATP depletion and AMPK mediated cellular energy stress response. Interestingly, this metabolic response is independent of the cGAS-STING pathway, suggesting the recognition system and signaling pathways for cytosolic DNA induced immune response and metabolic response are distinct.

Poly (I:C) was purchased from Amersham (Piscataway, NJ). All oligonucleotides were synthesized at sangon (Shanghai, China). Sequence of sense strand of ISD is as followed: 5'-TACAGATCTACTAGTGATCTATGACTGATCTGTACATGATCTACA-3'. Poly(dA), poly(dT), Poly(dA-dT) or poly(dG-dC) is a polymer of 45 deoxy-nucleotides. Equal molar amounts of ISD and their anti-sense oligos were annealed in annealing buffer (10 mM Tris, pH 7.5, 50 mM NaCl, 1 mM EDTA) at 95℃ for 5 min before cooling to room temperature. The anti-sense stranded ISD is the exact reverse complementary sequence of sense strand of ISD.

10ul of WST-1 or CCK-8 was diluted in 50ul media and then added into 50ul of media with transfection reagents. Cells were then incubated at 37°C and 5% CO2 for 30 minutes or one hour. Shake thoroughly for 1 min on a shaker. Measure the absorbance of the samples using Multiscan GO from Thermo Scientific at 450 nm. The reference wavelength was 600 nm.

Equal volume of compound from CellTiter-Glo® Luminescent Cell Viability Assay Kit (prepared as instructed in the manual) was added into media with transfection reagents. Record luminescence at Microplate Luminometer (Orion-L2) from BERTHORD, Germany [14].

Measurements of Glucose and Lactate

A total number of 5 × 104 293T cells were inoculated in 96-well plates overnight, then treated as indicated. Cell numbers were counted before measurements using a Countstar automated cell counter. The media were collected and the glucose and lactate levels were examined immediately using a Beckman Coulter AU480 (250 S. Kraemer Blvd., Brea, CA 92821, USA). The glucose was measured using AU Chemistry System from Beckman Coulter®. The lactate was measured using a Lactate Assay Kit. The levels of glucose consumption and lactate production were normalized to cell numbers [15].

Both dsISD and ssISD, but not poly(dA) inhibit cell proliferation

In an attempt to investigate cytosolic DNA induced cellular response, we introduced single or double stranded interferon stimulating DNA (ssISD or dsISD) into human embryonic kidney 293T cells for 24 hours by cationic polymer (Turbofect)-mediated transfection. Surprisingly, both dsISD and ssISD induced dramatic changes on cellular glucose metabolism, as reflected by acidification of the culture media (Fig. 1A), and cell morphology as observed under a microscope (Fig. 1B). These responses were accompanied with a reduction in cell proliferation and metabolic viability as measured by counting cell number (Fig. 1C) or colorimetric WST-1 (water soluble tetrazolium salt-1) assay (Fig. 1D). By contrast, no such changes were notable when we stimulated cells with single-stranded poly(dA), which also does not induce type I interferon in the study of cytosolic DNA induced innate immune responses[17]. Similar results were also observed when nucleic acids were introduced into cells using Lipofectamine 2000 transfection reagents (Supplementary Figure 1). Taken together, these data suggest that exposure of exogenous DNA to cytoplasm might affect cell metabolism and growth. 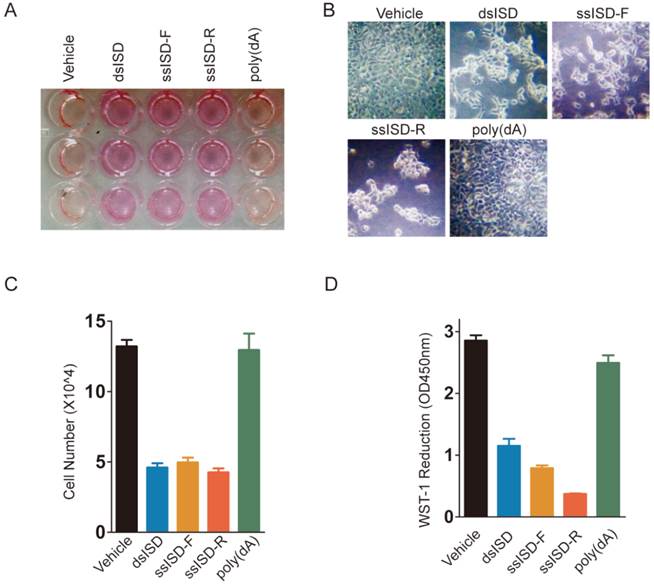 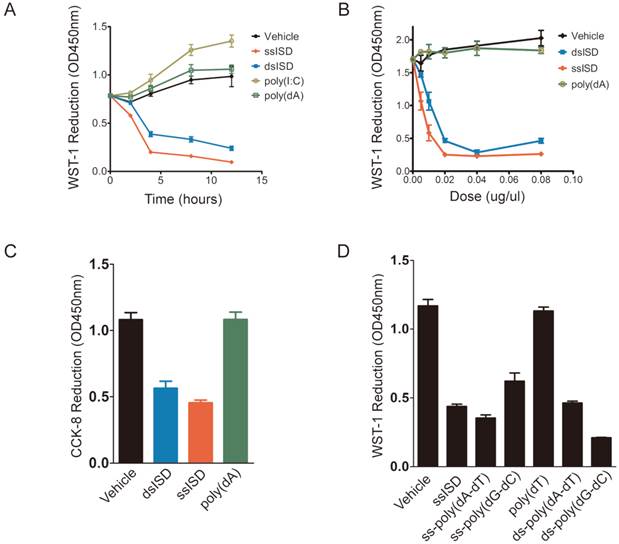 In order to better characterize ISD-induced cellular response, we performed time-course and dose-response analyses of ISD using WST-1 assay. Interestingly, as early as 4 hours after transfection, ssISD or dsISD dramatically decreased WST-1 reduction in a dose-dependent manner (Fig. 2A and 2B). No significant difference was observed between the sense strand and anti-sense strand of ssISD (Supplementary Figure 2). In contrast, poly(dA) or poly(I:C) (a dsRNA mimic) had little effect under the same conditions (Fig. 2A and 2B). Similar results were obtained using either conventional MTT assay (Supplementary Figure 3) or newly developed CCK-8 assay, which is more stable and sensitive (Fig. 2C). Next, we tested synthetic DNAs comprising different kinds of sequences, including poly(dT), poly(dA-dT) and poly(dG-dC). Both single stranded and double stranded poly(dA-dT) and poly(dG-dC), but not poly(dT) had the effect (Fig. 2D). We also tested the cell type specificity of this phenotype. In addition to immortalized human 293 cells, ISD-induced cellular response was also observed in many other cell lines including human cancerous THP-1 cells and immortalized mouse embryo fibroblast (MEF) cells (Supplementary Figure. 4A and 4B). Combined with PMS (phenazine methosulfate) electron mediator, WST-1 is readily reduced by NAD(P)H-dependent oxidoreductases in the cell into water-soluble formazan dyes [18-20]. Therefore, WST-1 reduction is proportional to intracellular reducing power like NAD(P)H level, reflecting the cellular metabolic viability. Thus, these data suggest that both ssISD and dsISD induce acute metabolic stress in nucleic acids type, sequence and dose dependent manner.

To determine whether this phenotype requires intracellular localization of DNA, we incubated ssISD or dsISD in the presence or absence of the transfection vehicle, which introduced DNA into cells. WST-1 reduction was decreased only in cells treated with the vehicle-DNA complex, but not ISD alone (Fig. 3A), indicating that recognition of ISD occurred in the cytoplasm, but not on the membrane. Furthermore, live-cell assay showed that Cy5 labeled ssISD entered cells as early as 2 hours post-transfection (Fig. 3B), which was consistent with the time point when WST-1 assay showed dramatic change. These data suggest that it is intracellular ISD that induces such phenotype, as shown for other ISD responses [21].

Due to the pivotal role of cGAS and STING in recognition of cytosolic DNA and induction of type I interferon [22], we examined whether cGAS or STING was required for ISD to induce metabolic stress. Because both cGAS and STING were known to express at very low levels in 293T cells [21], we used mouse fibroblast cells L929 as a model to study the relevance between cellular metabolic stress response and innate immune response, and their dependence on cGAS and STING. As shown in Fig 4, neither cGAS nor STING knockout attenuated the ability of either ssISD or dsISD induced metabolic stress response in L929 cells (Fig. 4A), although knockout of either cGAS or STING completely abolished cytosolic DNA induced type I interferon response (Fig. 4B and 4C), as expected[12, 21]. These results suggest that cytosolic ISD induced metabolic response is independent of cGAS and STING, and irrelevant to type I interferon mediated innate immune response.

In order to exam whether acute cellular response was also due to defect of glucose metabolism, we assayed glucose uptake and lactate production at different time after ISD transfection. Indeed, both glucose uptake and lactate production began to drop after 4 hours and became more and more dramatic with time upon ssISD stimulation (Fig. 5A and 5B). These results were further confirmed by the findings showing that both ssISD and dsISD, but not poly(dA) significantly attenuated both glucose uptake and lactate production 6 hours after ISD transfection (Fig. 5C and 5D). Consistently, similar to ISD transfection, glucose metabolism inhibitor 2-DG treatment for 6 hours also dramatically decreased intracellular reducing power as shown by WST-1 assay (Supplementary Figure 5). These results indicate that recognition of cytosolic ISD attenuates glucose metabolism, which likely accounts for cytosolic DNA induced acute metabolic stress.

Intracellular localization is essential for ISD induced metabolic stress. (A) 293T Cells were treated as indicated. WST-1 assay was performed at 6 hours post-transfection. (B) Real-time live cell imaging was taken from 5 minutes to 4 hours after transfection with ssiSD labeled with Cy5. Pictures were taken every 5 minutes. Data of three independent replicates are presented as the mean +/- s.e.m., n=3. 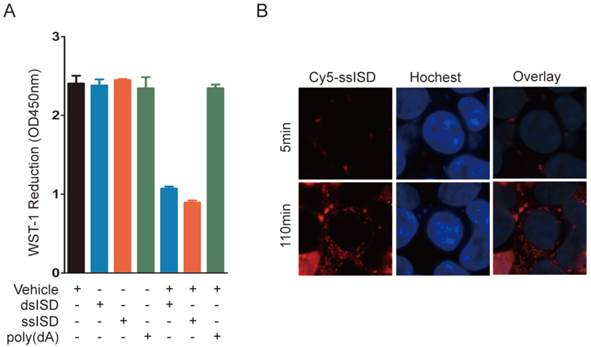 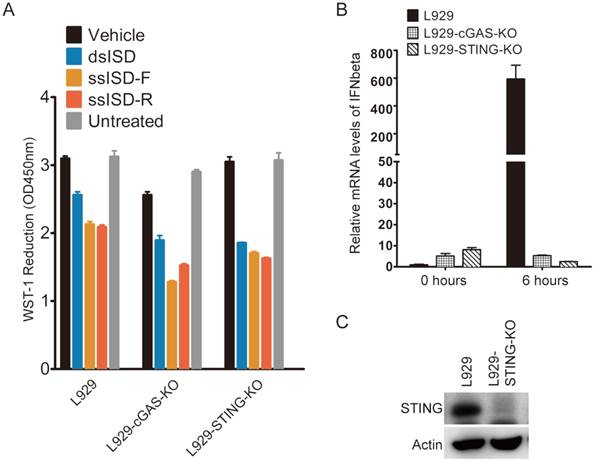 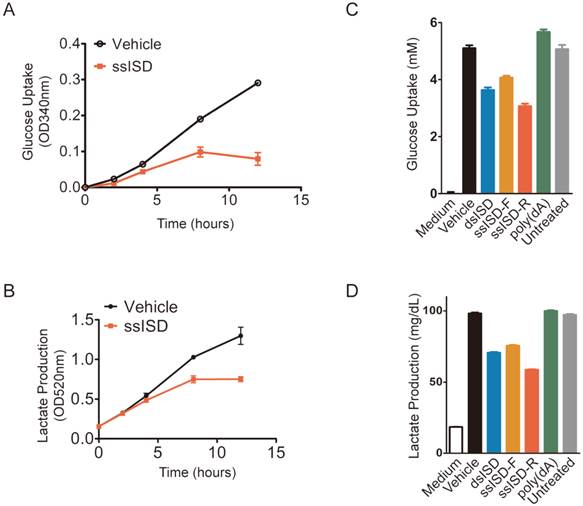 Upon viral infection, the host cells impose a network of barriers to constrain or eradicate viral infection [25]. DNA Viral infection exposes their genomic DNA to the cytoplasm of host cells. These exogenous DNA induced host innate immune response has been well studied and recognized as an intercellular defense [26]. However, the intracellular defense is still to be characterized. In this study, we have discovered for the first time that recognition of either cytosolic ssISD or dsISD inhibits glycolysis, leading to loss of reducing-power and ATP. The events downstream of this metabolic stress include activation of AMPK and inhibition of mTORC1, synergistically leading to reduced host cell proliferation and viability. Thus, recognition of cytosolic DNA induced metabolic response might potentially serve as an intracellular defense to viral infection.

During viral infection, especially when limited nutrition is available, intracellular ATP level is expected to fall leading to increase of AMP and activation of AMPK. Several studies have focused on the relationship of virus infection and AMPK signaling pathway [27, 28]. Notably, Human Cytomegalovirus (HCMV) infection increases the rate of glycolysis through activation of AMPK [29]. Activation of AMPK could be a double-edged sword to viral replication [30]. AMPK mediated activation of energy producing catabolic pathways, such as GLUT4 [31] activation, increase the rate of glycolysis, which might be beneficial for virus replication and DNA viral infection induced cell transformation [29]. However, AMPK mediated mTORC1 inhibition would be detrimental to protein synthesis and virus replication [32]. This paradox was resolved in part by the findings showing that HCMV UL38 protein circumvents inhibitory effect of AMPK on mTORC1 by binding to TSC1/2 complex[33]. In our pioneer study, we focused on the effect of viral DNA recognition on AMPK-mTORC1 axis. We show for the first time that viral DNA recognition attenuates glucose metabolism leading to activation of AMPK and inhibition of mTORC1, which plays a pivotal role in cell growth and viral replication. Theoretically, this AMPK mediated energy stress might also be circumvented by the interaction of host and viral proteins. Thereafter, unveiling the mechanisms of viral anti-energy-stress could also help us identify new targets and develop new strategies to limit viral replication.

18. Hoper J. Spectrophotometric in vivo determination of local mitochondrial metabolism by use of a tetrazolium salt. Physiological measurement. 1997;18:61-66