The promyelocytic leukemia protein (PML) is the essential component of multi-protein sub-nuclear structures, the PML-Nuclear bodies (PML-NB, [1]). The PML-NBs regulate a variety of nuclear functions, including post-translational modifications in nuclear proteins (acetylation, SUMOylation, ubiquitylation) [1]. This function has led to the current notion that PML is a modulator of cell responses, which might not be essential in steady-state conditions (under lack of stress) but plays a critical role when the cell and organism is challenged. This notion is supported by the fact that the lack of PML in mice does not result in embryonic lethality or overt physiological alterations in adulthood, but it alters the response to oncogenic insults or dietary alterations [1-4].

The activity of PML has been mostly investigated in the context of suppression, pathogenesis and progression of tumorigenesis. However, evidence of the function of this protein beyond malignant transformation are quickly accumulating. We and others have recently reported that the expression of PML is relevant for the response to metabolic insults, nutritional disorders and obesity [4-8]. In this study, we aimed at extending and defining the status of PML in conditions of nutritional challenge. To this end, we evaluated PML transcript abundance in a cohort of human liver biopsies from lean or morbidly obese subjects. Liver material from lean patients was obtained from 3 subjects (3 women; age, 46±12 years; BMI, 21±2 kg/m²) undergoing partial hepatectomy for benign tumors (neighbor tissues from four adenoma and one focal nodular hyperplasia) and did not display any hepatic steatosis, inflammation or fibrosis. For obese patients, bariatric surgery was indicated in accordance with French guidelines (the study was approved by “Comité Consultatif de Protection des Personnes dans la Recherche Biomédicale de Nice” 07/04:2003, N° 03.017) (Fig. 1A). Quantitative real time RT-PCR (q-RT-PCR) analysis (references from Applied biosystems Hs99999902_m1 for housekeeping RPLP0 (Ribosomal protein, large subunit, P0) and Hs00231241_m1 for PML and as previously described [9, 10]), revealed a significant PML up-regulation in obese individuals (Fig. 1B). Further, hepatic PML expression increased in obese patients without liver complications (n=5) versus lean subjects (+2.49±0.28, P=0.036). We next decided to extend this observation to diet-induced (Research Diets D12451 as obesogenic diet; LabDiet 5008 (Pharmaserv, Framingham, MA, USA) as chow, following the procedure in Ref. [11]) or genetic (Agouti mutant heterozygous) mouse models of obesity (the mouse experiments were approved by IACUC, USA). Q-RT-PCR analysis in high-fat diet fed mice demonstrated the up-regulation of Pml in livers from obese mice (murine Pml primers, Pml_F: GATCTCCGCGACAATTCAGT, Pml_R: ATGCCACTGCTGAATCTCCT; Cyclophilin was used as housekeeping gene; Cyclo_F: GGTGGAGAGCACCAAGACAGA, Cyclo_R: GCCGGAGTCGACAATGATG; Fig. 1C). Importantly, transcriptional up-regulation of this gene was accompanied by the detection of Pml immunoreactive nuclear bodies by immunohistochemistry in <5% of hepatocytes in livers from HFD mice (using Millipore Pml antibody), but rarely in those from lean individuals (Fig. 1D), similar to our prior observations in another mouse model [4]. Of note, Pml immunoreactivity was often restricted to a single or few large nuclear bodies of doughnut shape, a structural conformation prior described for PML nuclear bodies. We also confirmed the increase Pml immunoreactivity in a second murine model of obesity, driven by the heterozygous mutation in the Agouti gene (Jackson laboratory ref. KK.Cg-Ay/J; Ref. [12]; Fig. 1E). 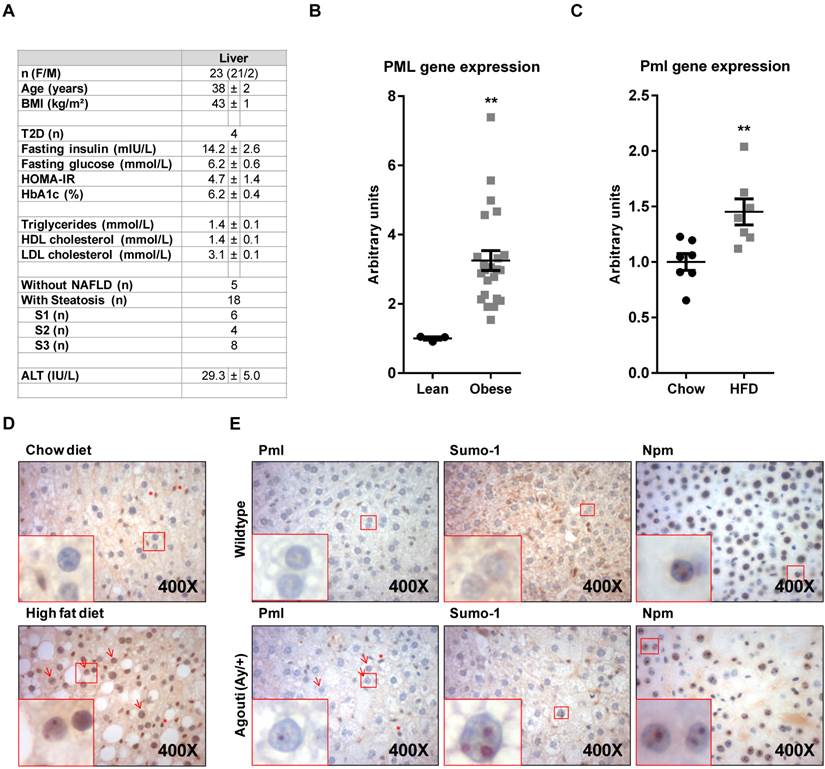 PML nuclear bodies are enriched in SUMO-1 (Santa Cruz BioTechnology). Immunohistochemical analysis confirmed similar nuclear distribution of Sumo-1 into nuclear bodies at a similar rate of Pml, which strongly suggests that the staining of Pml corresponds to functional nuclear bodies (Fig. 1E). It is worth noting that this altered pattern of nuclear localization was not observed in other non PML-NB resident proteins such as nucleophosmin (a nucleolar protein; Cell Signaling Technology; Fig. 1E). In summary, our results demonstrate that PML accumulates in hepatocytes in conditions of obesity.

Obesity is associated to lipid accumulation in hepatocytes, termed steatosis [13]. Since there are pathological conditions where steatosis can be triggered in the absence of obesity, we sought to ascertain whether PML accumulation was related to obesity or it was a consequence of the steatosis associated to weight increase. To this end, we first evaluated PML expression in obese patients with different degree of steatosis (0, <5%; 1, 5%-30%; 2, >30%-60%; 3, >60%) [14]. The results clearly demonstrated that PML expression significantly correlated with the extent of steatosis (Fig. 2A).

Fatty liver disease is a rapidly increasing pathology that, albeit tightly associated with obesity, is also observed in a fraction of lean individuals, where it is thought to be related to nutrition and life style factors [13]. Our results conclusively demonstrate that PML expression is increased in livers from obese individuals, and is particularly associated to a steatotic phenotype. These findings are of relevance for the characterization of PML non-tumoral functions. Importantly, this observation might open an interesting mean of regulation of PML in the context of cancerous lesions, in which nutrient availability might impact on the expression of this protein and hence on the biology of the disease. In particular, they extend our knowledge regarding the patho-physiological regulation of PML in metabolism. In this respect, it is tempting to speculate that PML induction may represent a failsafe response to steatosis in view of the positive role it plays in the activation fatty acid oxidation pathways [4, 5]. 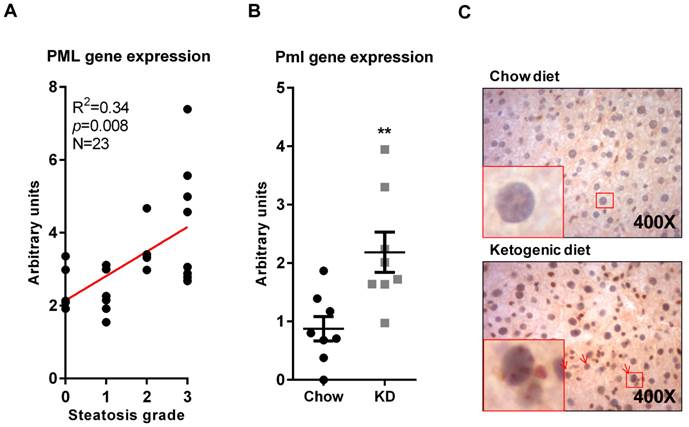 Apologies to those whose related publications were not cited due to space limitations. The work of AC is supported by the Ramón y Cajal award, the Basque Department of Industry, Tourism and Trade (Etortek), health (2012111086) and education (PI2012-03), Marie Curie (277043), Movember, ISCIII (PI10/01484, PI13/00031) and ERC (336343). N.M-M. is supported by the Spanish Association Against Cancer (AECC). The work of P.G. was supported by grants from INSERM (France), the University of Nice, the Programme Hospitalier de Recherche Clinique (Centre Hospitalier Universitaire of Nice), and charities (Association Française pour l'Etude du Foie, Société Francophone du Diabète and SFD/Roche Pharma, European Foundation for the study of Diabetes/Lilly European Diabetes Research Program and the French Government (National Research Agency, ANR) through the "Investments for the Future" (LABEX SIGNALIFE: program reference #ANR-11-LABX-0028-01). The work of P.P.P. and A.C. was supported by the National Institutes of Health (NIH, USA) grants. N.D. was supported by NRSA 5T32DK751627 (NIH, USA). M.L.M.-C was funded by Sanidad Gobierno Vasco 2013, FIS PI11/01588.