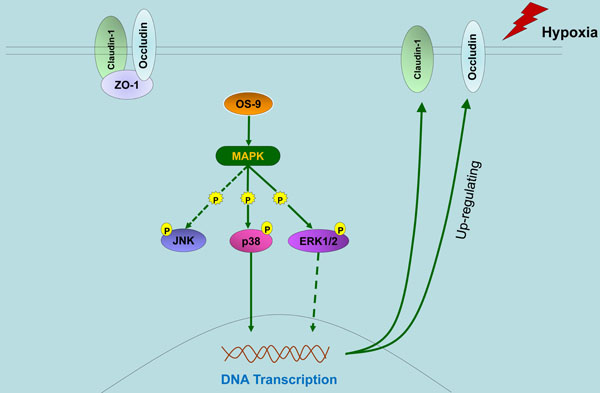 OS-9 is a lectin required for efficient ubquitination of glycosylated substrates of endoplasmic reticulum-associated degradation (ERAD). OS-9 has previously been implicated in ER-to-Golgi transport and transcription factor turnover. However, we know very little about other functions of OS-9 under endoplasmic reticulum stress. Here, we used gene knockdown and overexpression approaches to study the protective effect of OS-9 on intestinal barrier function of intestinal epithelial cell Caco-2 monolayer. We found that OS-9 attenuated intestinal epithelial barrier dysfunction under hypoxia through up-regulating occludin and claudin-1 protein expression. Furthermore, we showed that the up-regulation of occludin and claudin-1 induced by OS-9 was mediated by p38 and ERK1/2 phosphorylation and did not involve HIF-1α. In summary, our results demonstrate that OS-9 up-regulates occludin and claudin-1 by activating the MAP kinase (MAPK) pathway, and thus protects the epithelial barrier function of Caco-2 monolayer under hypoxia condition.

Intestinal mucosa serves as a major functional barrier separating potentially harmful intraluminal elements such as bacteria and endotoxins from extra-intestinal tissues and the circulation system [1,2]. The integrity of the intestinal mucosa barrier is an essential preliminary defensive mechanism in the pathophysiology of systemic complications [3]. In mesenteric ischemia-reperfusion (I/R), the intestinal barrier function is compromised, resulting in destruction of tight junctions (TJs) and increase of intestinal permeability to macromolecules [4,5]. Intestinal injury associated with ischemia is integral to the pathogenesis in multiple diseases. One major consequence of intestinal ischemia is hypoxia, which leads to endoplasmic reticulum stress [6].

As a master regulator of the hypoxic response, hypoxia-inducible factor-1α (HIF-1α) plays an important role in the regulation of intestinal barrier. Some studies have showed that HIF-1α activation is deleterious to intestinal barrier function associated with hypoxia, I/R, and inflammation [7-10]. In our previous research, HIF-1α was also demonstrated to induce the loss of epithelial barrier and disruption of tight junction proteins [11]. However, the precise molecule mechanisms by which HIF-1α regulates intestinal epithelial barrier (IEB) are still elusive.

Interestingly, accumulating evidence revealed the potential relationship between endoplasmic reticulum (ER) stress and HIF-1α activation under various pathological stimuli [12,13]. Of note, a recent study showed that a novel regulator, osteosarcoma-9 (OS-9), was identified as HIF-1α binding partners [14]. Usually, OS-9 is proposed as a lectin which played a key role during the ER stress response associated with hypoxia [15-17]. Functionally, it has been implicated in ER-to-Golgi transport of the membrane protease and helps to select misfolded glycoproteins for degradation [18,19]. Recently, Carvalho and colleagues showed that OS-9 is involved in cell survival and resistance to apoptosis [20]. Should be note, the current studies suggested that OS-9 may affects hypoxic signaling via interaction with either the transcription factor HIF-1α or an HIF-1α-independent pathway [14,21,22]. Nonetheless, little data exist for the function of OS-9 in intestinal epithelial cells, especially its role in the regulation of TJs and IEB. Thus, it would be important to clarify the exact role of OS-9 in the mechanisms of IEB modulation in a HIF-1α-dependent or independent way under hypoxia conditions.

According to the above, we hypothesized that OS-9 could regulate the IEB through HIF-1α dependent pathway. In this study, for the first time we used genetic and biochemical approaches to show that OS-9 plays an important role in maintaining the IEB function under hypoxia conditions. However, this barrier-inducing effect of OS-9 is mediated by p38 and ERK1/2 phosphorylation and did not involve HIF-1α.

Cells were fixed in 4% paraformaldehyde for 15 min, washed 3 times with PBS, and blocked in PBS containing 5% BSA. Cells were then incubated with various primary antibodies overnight as recommended by the suppliers. The next day, cells were incubated with fluorescence-conjugated secondary antibodies for 1 hour. Cells were also stained with DAPI (Invitrogen) for nucleus visualization. All images were obtained with a TCS-SP5 confocal microscope (Leica, Germany).

Short-interfering RNA (siRNA) duplexes targeting the OS-9 mRNA were synthesized by Ribobio (Guangzhou, China) as follows: GGAAACACCUGCUUACCAAdTdT and dTdTCCUUUGUGGACGAAUGGUU. A nonspecific siRNA was used in parallel as control. Briefly, cells were incubated with siRNA for 6 hours at 37℃ according to the manufacturer's instructions. At 48 hours after transfection, cells were subjected to transepithelial electrical resistance (TER) measurement and lysed to generate lysates for immunoblot analyses.

For production of recombinant lentivirus, 1×106 293T cells were co-transfected for 4 hours with 6 μg of the empty vector or target vector encoding V5-tagged plenti6.3-OS-9 (Invitrogen), 4.5 μg of psPAX2 (Addgene) and 1.5 μg pMD2G-VSVG (Addgene). After removal of the transfection mixture, cells were incubated in culture medium for 72 hours. The medium containing recombinant lentivirus was centrifuged at 3000 rpm for 15 minutes, filtered through a 0.45 μm filter (Millipore) and stored at -80℃. Virus titer was determined by infecting 293T cells with a recombinant lentivirus carrying the Plenti6.3-IRES2-EGFP vector (Invitrogen) and counting EGFP positive cells under fluorescence microscope. On average, the viral titer was 1×106 transduction units/ml.

For stable cell line establishment, 2×105 Caco-2 cells were infected with 1×106 transduction units of the OS-9 expressing recombinant lentivirus for 24 hours in the presence of polybrene (1:2000). OS-9-expressing cells were selected and maintained in MEM containing 10 μg/ml blasticidin (Sigma).

TER was measured with an electric resistance system ERS-2 (Millipore) following the manufacturer's instructions. Briefly, Caco-2 cells were grown on Millicell® filter (0.33 cm2 area, 0.4 μm pore diameter, and 6.5 mm diameter) and the culture medium was replaced before TER measurement. To calculate the actual resistance of the cell monolayer, the mean resistance of filters without cell was subtracted from the monolayer measurement, and the difference between the filter and monolayer areas was corrected.

Experimental data were shown as the Mean ± SD. Statistical analysis was performed using the SPSS software (version 13.0 for windows) and significant difference was defined as P < 0.05.

OS-9 knockdown aggravates the injury of IEB function in hypoxia 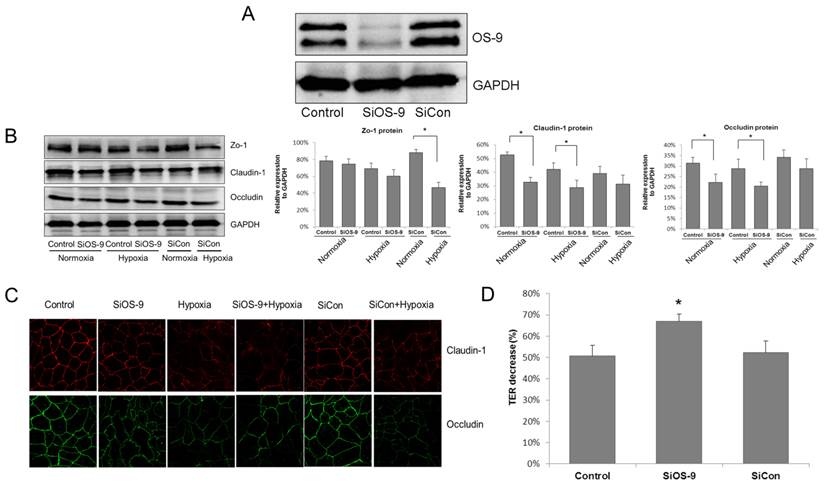 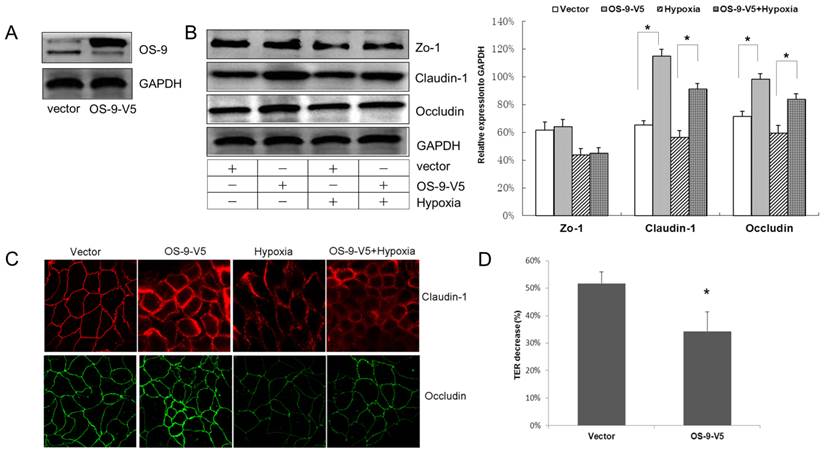 The TJ functional impact of OS-9 knockdown on Caco-2 cell monolayer was further examined by measuring the transepithelial electrical resistance (TER) value. As shown in Fig. 1D, hypoxia resulted in a 50.77%±5.02% reduction of TER in control cells whereas OS-9 knockdown further decreased TER to 66.93%±3.39% in cells expressing the OS-9 siRNA (P< 0.05). These results indicate that OS-9 plays a protective role in hypoxia by up-regulating the expression of TJ proteins.

To directly address the barrier-protective role of OS-9 in hypoxia-induced intestinal epithelial injury, we used an OS-9 expressing lentiviral vector to deliver OS-9 into Caco-2 cell monolayer and monitored TJ protein expression and TER as above. Western blot analysis confirmed efficient delivery of OS-9 into Caco-2 cells at protein level (Fig. 2A).

Previous studies reported that OS-9 downregulatd HIF-1α mRNA and protein levels [14]. In our previous researches, HIF-1α pathways aggravate IEB dysfunction caused by proinflammatory cytokine IFN-γ [11]. So, we tested the hypothesis that OS-9 protects Caco-2 cell monolayer by downregulating HIF-1α. Unexpectedly, we found that HIF-1α protein level was unaffected by OS-9 knockdown (Fig. 3A) or overexpression (Fig. 3B) under either normoxia or hypoxia condition. These results suggested that OS-9 does not regulate HIF-1α protein level, at least in Caco-2 cells.

We next tested whether p38 or ERK1/2 phosphorylation/activation was required for OS-9-mediated protection of Caco-2 epithelial barrier function. We treated normal or OS-9 overexpressing cells with SB202190 or U0126, phosphorylation inhibitor of p38 or ERK1/2, respectively, and measured claudin-1 and occludin expression and TER. SB202190 dramatically reduced both claudin-1 and occludin protein levels (P<0.05) in OS-9 overexpressing cells but not in normal cells either normoxia or hypoxia (Fig. 5A). Consistent with this result, although OS-9 overexpression significantly increased TER, as expected, this protection effect of OS-9 is dramatically negated upon SB202190 treatment; the inhibitor only slightly reduced TER in normal cells (Fig. 5B). In contrast, U0126 did not alter claudin-1 or occludin protein level, nor did it significantly affect TER in control or OS-9 overexpressing cells (Fig. 5C and 5D). These results suggested that OS-9 exerts its protective effects on Caco-2 epithelial barrier function via the p38 signaling pathway. 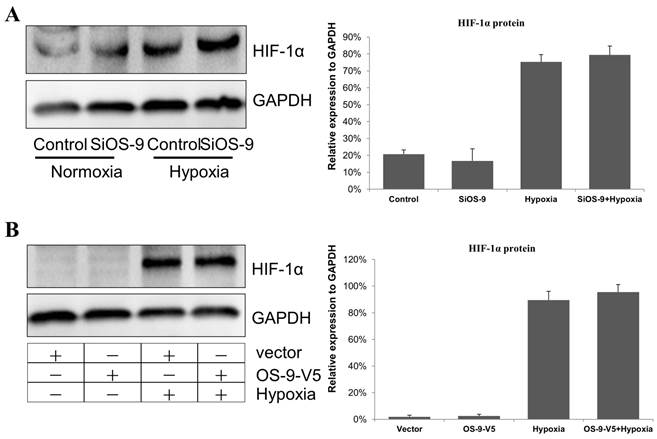 In this study, we show that: (1) OS-9 significantly improves the epithelial barrier function of Caco-2 monolayer via up-regulation of the TJ protein level of occludin and claudin-1 but not ZO-1; (2) OS-9 does not regulate HIF-1α protein level in Caco-2 cells under either normoxia or hypoxia condition; (3) OS-9 markedly stimulates the phosphorylation of p38; (4) SB202190, a specific inhibitor of p38 phosphorylation, impairs the barrier protective function of OS-9 by reducing claudin-1 and occludin protein levels. Together, our results display a novel barrier-protective role of OS-9 on intestinal epithelial cells against hypoxia injury via a p38- but not HIF-1α-dependent pathway.

OS-9 is a lectin required for efficient ubquitination of glycosylated endoplasmic reticulum-associated degradation (ERAD) substrates [16,25]. It interacts with meprin-B, N-copine, DC-STAMP and TRPV4, proteins associated with the endoplasmic reticulum, and plays a role in ER-to-Golgi transport of membrane proteins in mammalian and yeast cells [18,19,26-28]. It was not known whether OS-9 regulates other membrane proteins such as TJ proteins, a group of proteins tightly connected around cells [29,30]. In this study, we used loss-of-function and gain-of-function approaches to demonstrate that OS-9 protects the Caco-2 monolayer barrier function by up-regulating occludin and claudin-1 protein levels. It did not regulate ZO-1, which is a cytoplasmic plaque protein [29]. Our future studies will address how OS-9 modulates the expression as well as TJ functions of claudin-1 and occludin protein, including a possible role in protein transport to cell surface.

The HIF-1α signaling pathway has emerged as a major regulator of intestinal homeostasis and appears to manifest a dichotomous role in some gut disease [31]. It was reported that HIF-1α is injurious to intestinal barrier function, possibly via inhibiting the expression of TJ proteins [7-11,32]. Since previous studies identified OS-9 as a negative regulator of HIF-1α [14,33], we investigated the potential role of HIF-1α in the barrier-modulation function of OS-9. However, HIF-1α protein level was not affected by OS-9 knockdown or overexpression, suggesting that the barrier protective function of OS-9 in Caco-2 cells is mediated by a HIF-1α independent pathway. These results are consistent with the results of some other studies [22].

In an effort to identify the pathway utilized by OS-9 to regulate TJ proteins and exert its barrier protective function, we found that p38 and ERK1/2 phosphorylation both were stimulated by OS-9 overexpression. Using a specific inhibitor of p38 phosphorylation, we went on to show that activation of the p38 MAPK pathway is required for OS-9 induced up-regulation of claudin-1 and occludin protein levels and TER value. However, we did not obtain the similar results with p38 from the U0126, which is a specific inhibitor of ERK1/2 phosphorylation. This finding provided insight into the mechanism underlying the intestinal barrier protective functions of OS-9. Previously, activation of p38 MAPK pathway has been reported to mediate IEB dysfunction [34,35]. Furthermore, the p38 MAPK was originally identified as proteins activated in response to cellular stresses such as hyperosmolarity, arsenite or taxol and pro-inflammatory cytokines [36-38]. These studies provide further support for our results that OS-9 protect IEB by a p38 dependent pathway. Future studies will focus on the identification of molecules downstream of p38 that carry out the protective functions of OS-9 in intestine epithelial cells.

In conclusion, our results demonstrate that OS-9 maintains IEB function by up-regulating occludin and claudin-1 expressions. The signal molecule p38 is closely involved in the barrier protective mechanisms of OS-9 under hypoxia. It will be important to determine the precise mechanism of how OS-9 maintains the epithelial barrier function from hypoxia-induced injury.