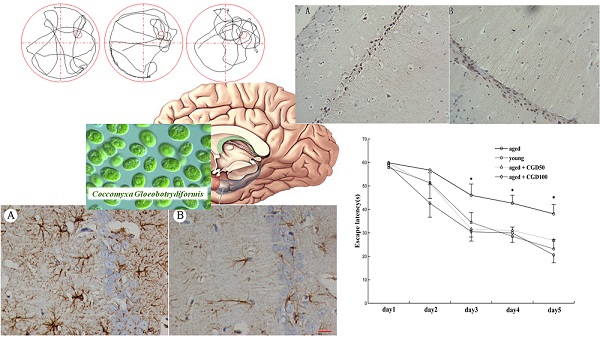 Declining in learning and memory is one of the most common and prominent problems during the aging process. Neurotransmitter changes, oxidative stress, mitochondrial dysfunction and abnormal signal transduction were considered to participate in this process. In the present study, we examined the effects of Coccomyxa gloeobotrydiformis (CGD) on learning and memory ability of intrinsic aging rats. As a result, CGD treated (50 mg/kg·d or 100 mg/kg ·d for a duration of 8 weeks) 22-month-old male rats, which have shown significant improvement on learning and spatial memory ability compared with control, which was evidently revealed in both the hidden platform tasks and probe trials. The following immunohistochemistry and Western blot experiments suggested that CGD could increase the content of Ach and thereby improve the function of the cholinergic neurons in the hippocampus, and therefore also improving learning and memory ability of the aged rats by acting as an anti-inflammatory agent. The effects of CGD on learning and memory might also have an association with the ERK/CREB signalling. The results above suggest that the naturally made drug CGD may have several great benefit as a multi-target drug in the process of prevention and/or treatment of age-dependent cognitive decline and aging process.