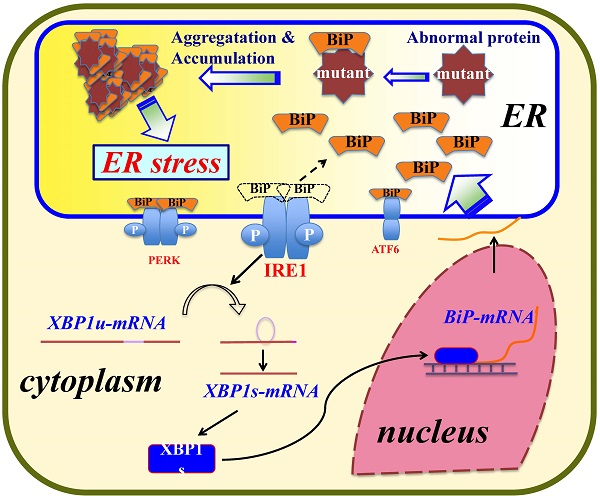 Amyloidogenic human lysozyme variants deposit in cells and cause systemic amyloidosis. We recently observed that such lysozymes accumulate in the endoplasmic reticulum (ER) with the ER chaperone GRP78/BiP, accompanying the ER stress response. Here we investigated the region of lysozyme that is critical to its association with GRP78/BiP. In addition to the above-mentioned variants of lysozyme, we constructed lysozyme truncation or substitution mutants. These were co-expressed with GRP78/BiP (tagged with FLAG) in cultured human embryonic kidney cells, which were analyzed by western blotting and immunocytochemistry using anti-lysozyme and anti-FLAG antibodies. The amyloidogenic variants were confirmed to be strongly associated with GRP78/BiP as revealed by the co-immunoprecipitation assay, whereas N-terminal mutants pruned of 1-41 or 1-51 residues were found not to be associated with the chaperone. Single amino acid substitutions for the leucine array along the α-helices in the N-terminal region resulted in wild-type lysozyme remaining attached to GRP78/BiP. These mutations also tended to show lowered secretion ability. We conclude that the N-terminal α-helices region of the lysozyme is pivotal for its strong adhesion to GRP78/BiP. We suspect that wild-type lysozyme interacts with the GRP at this region as a step in the proper folding monitored by the ER chaperone.