Tuberculosis (TB) is caused by infection with Mycobacterium tuberculosis (Mtb). The efforts to control TB have been impaired by the emergence of multidrug-resistant (MDR) strains and HIV epidemic. According to the World Health Organization (WHO) report, there were 9 million newly diagnosed TB cases and 1.5 million death cases worldwide in 2013 [1]. Meanwhile, there were 480,000 newly diagnosed multidrug-resistance tuberculosis (MDR-TB) cases and 210,000 death cases [2]. Globally, 3.5% of newly diagnosed TB cases and 20.5% of previously treated TB cases were estimated to have had MDR-TB. The MDR-TB rate in China has been estimated to be 11.6% for new and 35.9% for previously treated TB cases [3], which is significantly higher than global average. Only 48% of MDR-TB patients have been reported to be successfully treated [2], while 90% of drug-sensitive tuberculosis (DS-TB) patients were cured. Therefore, MDR-TB has become the most difficult problem for TB prevention and treatment, leading to the widespread of TB.

Epidemiological reports declared that irrational prescription, inadequate administration of drug, and intermittent drug therapy are the most common reasons for causing MDR-TB. The key to control MDR-TB is early diagnosis [4, 5]. Drug susceptibility testing (DST) is the golden standard for MDR-TB diagnosis. However, DST takes 6-8 weeks to obtain results. Microscopic-observation drug susceptibility (MODS) testing [6] have shortened the time needed for phenotypic assays to between 1 and 2 weeks, however, it might over-diagnose MDR-TB. The results of fluorophage method matched 100% [7] with that of DST, but the verified sample size was too small (only 7 cases per group). Polymerase chain reaction-restriction fragment length polymorphism (PCR-RFLP) technique [8, 9] could only detect specific mutations, and is not suitable for other clinical causes. Current routine methods are not very effective or rapid. Therefore, there is an urgent need to obtain novel biomarkers suitable for MDR-TB diagnosis.

The workflow of our study is shown in Fig. 1. In order to increase the precision and accuracy of the data in proteomics study [13], equal amount of 10 different samples were mixed to produce a sample group. In addition, 10 samples were randomly divided into two pools as biological replicates. Then, six iTRAQ labeled sample pools were generated (healthy controls group, DS-TB group, and MDR-TB group; each for two subgroups).

High-abundance serum proteins such as albumin, IgG, and haptoglobin were removed by using the Human 14 Multiple Affinity Removal System (Agilent Technologies, Santa Clara, CA, USA). Then, the proteins were concentrated and desalted [14]. A total of 100 μg protein from each group was soaked in ice-cold acetone, and then centrifuged. After that, the samples were digested overnight with trypsin at 37°C. Finally, iTRAQ reagents (Applied Biosystems, Foster city, CA, USA) were labeled for six groups: healthy control group, iTRAQ reagent 113, 117; DS-TB group, iTRAQ reagent 114, 118; MDR-TB group, iTRAQ reagent 116, 121. The six sample groups were mixed, desalted, and dried.

The iTRAQ labeled peptides were separated by polysulfoethyl column (2.1×100 mm, 5 μm, 200Ǻ; Nest Group, Inc., Southborough, MA, USA) of strong cation exchange (SCX) chromatography [15]. A total of ten SCX components were collected, concentrated, and dissolved. Samples were subsequently loaded onto the ZORBAX 300SB-C18 column (5 μm, 200Ǻ, 0.1 × 150mm, Microm, Auburn, CA, USA). The components produced by SCX chromatography were subjected to MS analysis twice. The ratio of the peak area of the iTRAQ reporter ion reflected the relative abundance of the peptide and protein [16, 17]. Protein identification and quantification were performed using the ProteinPilotTM software (Applied Biosystems, version 4.2). The ProGroup algorithm was used to identify peptides. MS/MS data were searched against the Human International Protein Index database (version 3.87) as described previously [14, 16, 17]. In order to reduce false positive results, a strict cutoff for protein identification was applied with the unused ProtScore > 1.3 and at least one peptide with a 95% confidence limit [18, 19]. The expression ratio higher than 1.50-fold or lower than 0.60-fold were considered significant. 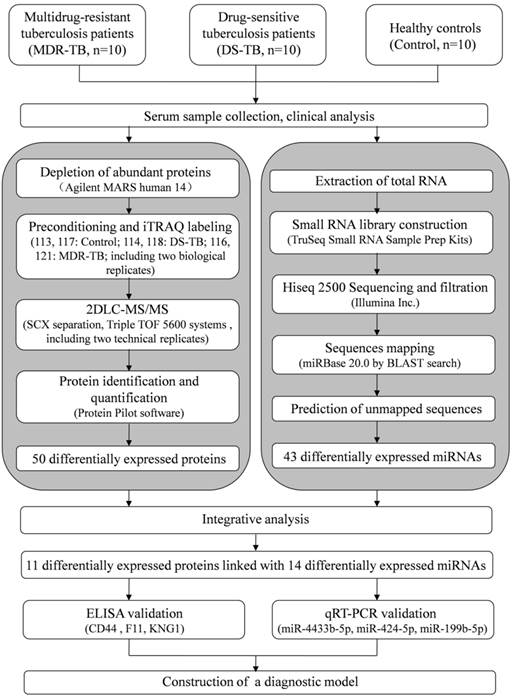 The raw reads were subjected to the Illumina pipeline filter (Solexa 0.3), and then the dataset was further processed with an in-house program, ACGT101-miR (LC Sciences, Houston, Texas, USA) to remove adapter dimers, junk, low complexity, common RNA families (rRNA, tRNA, snRNA, snoRNA) and repeats. Subsequently, unique sequences with length in 18~26 nucleotide were mapped to specific species precursors in miRBase 20.0 by BLAST search to identify known miRNAs and novel 3p- and 5p- derived miRNAs. Length variation at both 3' and 5' ends and one mismatch inside of the sequence were allowed in the alignment. The unique sequences mapping to specific species mature miRNAs in hairpin arms were identified as known miRNAs. The unique sequences mapping to the other arm of known specific species precursor hairpin opposite to the annotated mature miRNA-containing arm were considered to be novel 5p- or 3p- derived miRNA candidates. The remaining sequences were mapped to other selected species precursors (with the exclusion of specific species) in miRBase 20.0 by BLAST search, and the mapped pre-miRNAs were further BLASTed against the specific species genomes to determine their genomic locations. The above two we defined as known miRNAs. The unmapped sequences were BLASTed against the specific genomes, and the hairpin RNA structures containing sequences were predicated from the flank 80 nt sequences using RNAfold software (http://rna.tbi.univie.ac.at/cgi-bin/RNAfold.cgi).

The parametric data were tested using the chi-square test for the composition ratios, t-tests for means of two groups, and one-way analysis of variance (ANOVA) for means of three or more groups. Nonparametric analysis was performed using the Mann-Whitney U-test and the Kruskal-Wallis H-test. Spearman correlation method was performed to determine association between two different parameters. P values <0.05 were considered statistically significant by the SPSS software (Chicago, IL, version 16.0). Receiver operating characteristic (ROC) curve were calculated by MedCalc Software (Belgium, Version 12.4.2.0) and the diagnostic score of MDR-TB patients was set as 1, whereas that of DS-TB patients and healthy controls was set as 0. Selected biomarkers were transferred to Biomarker Pattern Software (BPS, Ciphergen Biosystems) to construct the decision tree of MDR-TB [24]. Accuracy was defined as the proportion of correct state classifications. 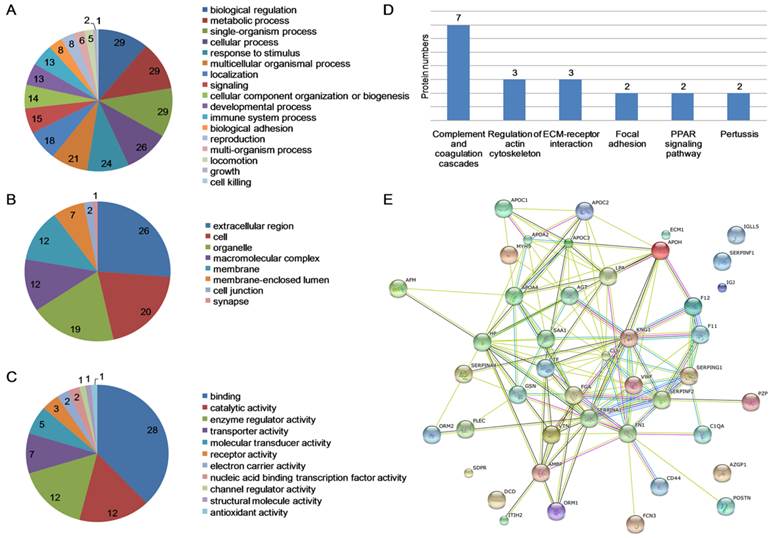 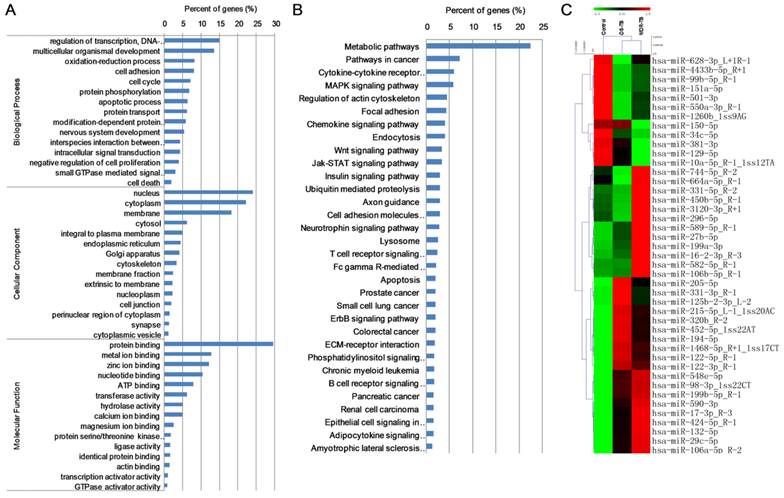 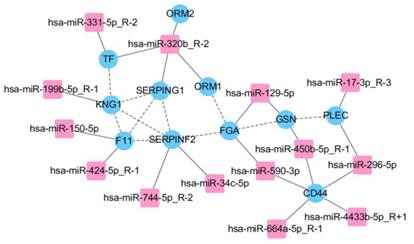 MDR-TB patients are infected with strains resistant to both isoniazid and rifampicin. The highest MDR-TB rates have been found in countries of Eastern Europe and central Asia, where MDR strains threaten to become as common as pan-susceptible strains [25]. Clinical data analysis showed liver dysfunction (decreased albumin), immune system activation (increased globulin, IgG), complement system activation (increased C4, C3), and coagulation disorder (increased INR, fibrinogen) in MDR-TB patients as well as DS-TB patients (Table 1). In addition, there were significant differences of albumin, albumin/globulin ratio, and fibrinogen levels between MDR-TB patients and DS-TB patients (P<0.05). We screened proteomic and transcriptomic differences between MDR-TB patients, DS-TB patients, and healthy controls by using iTRAQ-2D LC-MS/MS and Solexa sequencing, and found 50 differentially expressed proteins and 43 differentially expressed miRNAs. Previous studies observed reduced serotransferrin [14] and fibronectin (FN1) [26] levels, and increased miR-199a-3p [27] and miR-122 [28] levels in TB patients than the healthy controls, which is consistent with our results. Moreover, differentially expressed proteins and miRNAs in our study were also involved in the pathogenesis of pulmonary TB. FN1 is an important extracellular matrix protein, which can combine with Mtb and regulate recruitment and retention of T cells [29], and may indicate pathological changes in granuloma formation of TB [26]. Haptoglobin (HP) was increased in TB patients and might indicate Traditional Chinese Medicine (TCM) syndrome [30], while 2-2 phenotype of HP was associated with high mortality rate of pulmonary TB [31]. Up-regulation of miR-132 was found after Mtb infection, which can limit macrophage response to IFN-γ by altering p300 protein [32]. The miR-125b was also increased after Mtb infection, allowing Mtb to subvert host immunity by translational repression and/or degradation of TNF mRNA [33]. 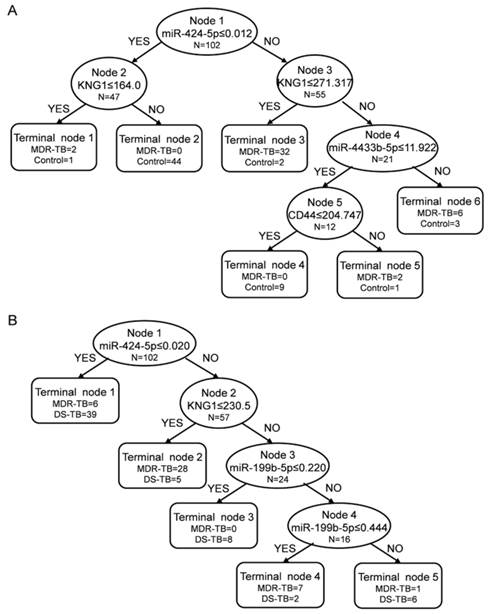 In the present study, 22.00% (11 out of 50) of the proteins and 32.56% (14 out of 43) of the miRNAs correlated with each other (Fig. 4), suggesting that transcriptional regulation and post-transcriptional regulation play important roles in the pathogenesis of MDR-TB. Both the proteomic and transcriptomic data are important in deciphering the molecular processes involved in MDR-TB pathogenesis. The integrative transcriptomic and proteomic data not only highlighted a set of miRNAs/proteins that were possibly involved in the diagnosis of MDR-TB but also revealed molecular characterizations associated with the pathogenesis of MDR-TB in the hosts.

Significant differences of miR-4433b-5p, CD44, miR-424-5p, F11, miR-199b-5p, and KNG1 were found among MDR-TB patients, DS-TB patients and healthy controls (P<0.05). Ple et al. [35] reported miR-4433 as a kind of human platelet miRNAs. The predicted target-CD44 is a member of the hyaluronate receptor family of cell adhesion molecules, and plays an important role in lymphocyte trafficking [36]. Leemans et al. [37] identified CD44 as a new binding site for Mtb that mediates mycobacterial phagocytosis and protective immunity against pulmonary TB. Previous studies have found that miR-424 regulate transcriptional factor NFI-A, thereby controlling human monocyte/macrophage differentiation [38], and may lead to a disorder of T cells and B cells proportion [39]. Consistent with our results, increased levels of miR-424 have been found in active TB [39], Crohn's disease [40], and Alzheimer's disease [41]. F11 may be involved in leukocyte trafficking, either directly or, via inflammatory pathways, indirectly [42]. Furthermore, activation and/or consumption of F11 during infection or inflammation have been documented in animal models and human patients. Our results manifested that MDR-TB patients undergo immune system activation, and coagulation system disorders.

Consistent with the target gene prediction, our study also found a negative correlation between miR-199b-5p and KNG1 (r=-0.232, P=0.017). Qi et al. [27] and Zhang et al. [28] also evaluated the target gene prediction, but failed to validate predicted genes/proteins. The miR-199b-5p is also a kind of human platelet miRNA [35] while KNG1 is essential for blood coagulation. Analyses of the urine proteome of patients with chronic pancreatitis [43] and interstitial cystitis [44] showed reduced KNG1 levels. It has been suggested that KNG1 is proteolyzed by neutrophils at the inflammation sites. Lower level of KNG1 was found in the fibrosis/cirrhosis patients compared with the non-fibrosis hepatitis C patients [45], indicating that KNG1 was directly related to the severity of impaired liver function. Therefore, we suspected that the increased miR-199b-5p level in MDR-TB patients inhibited KNG1 target gene expression through post-transcriptional regulation, and then reduced KNG1 protein level, resulting in blood coagulation and fibrinolysis system imbalance. Moreover, MDR-TB patients suffered a more serious liver damage than DS-TB patients.

Our study also found positive correlation between KNG1 and F11 (r=0.308, P<0.0001) which is consistent with a genome-wide association study indicating that both KNG1 and F11 gene can regulate F11 protein level [46].

In conclusion, we screened and identified proteomic and transcriptomic biomarkers for MDR-TB patients, and focused on complement and coagulation cascade by integrative analysis. By ELISA and SYBR green qRT-PCR validation, we established the MDR-TB diagnostic model with CD44, KNG1, miR-4433b-5p, miR-424-5p, and miR-199b-5p biomarkers. Our study proposes potential biomarkers for MDR-TB diagnose, and allows a better understanding of the pathogenesis of MDR-TB and DS-TB.

We thank the pulmonary DS-TB patients and MDR-TB patients enrolled in our study and the study coordinators and staff at the hospitals for their contributions to this research. This work was supported by grants from National Natural Science Foundation of China (No.81573709, No.81273882), the National Basic Research Program of China (No.2014CB543002) and the National Special Sci-Tech Projects (No.2012ZX10005001-006).