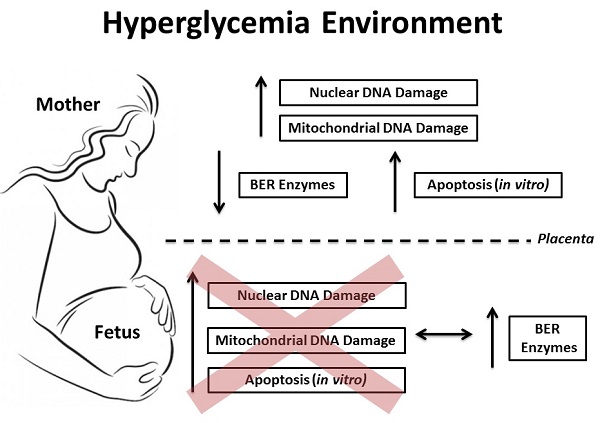 Objective: Investigate the DNA damage and its cellular response in blood samples from both mother and the umbilical cord of pregnancies complicated by hyperglycemia. Methods: A total of 144 subjects were divided into 4 groups: normoglycemia (ND; 46 cases), mild gestational hyperglycemia (MGH; 30 cases), gestational diabetes mellitus (GDM; 45 cases) and type-2 diabetes mellitus (DM2; 23 cases). Peripheral blood mononuclear cell (PBMC) isolation and/or leukocytes from whole maternal and umbilical cord blood were obtained from all groups at delivery. Nuclear and mitochondrial DNA damage were measured by gene-specific quantitative PCR, and the expression of mRNA and proteins involved in the base excision repair (BER) pathway were assessed by real-time qPCR and Western blot, respectively. Apoptosis was measured in vitro experiments by caspase 3/7 activity and ATP levels. Results: GDM and DM2 groups were characterized by an increase in oxidative stress biomarkers, an increase in nuclear and mitochondrial DNA damage, and decreased expression of mRNA (APE1, POLβ and FEN1) and proteins (hOGG1, APE1) involved in BER. The levels of hyperglycemia were associated with the in vitro apoptosis pathway. Blood levels of DNA damage in umbilical cord were similar among the groups. Newborns of diabetic mothers had increased expression of BER mRNA (APE1, POLβ and FEN1) and proteins (hOGG1, APE1, POLβ and FEN1). A diabetes-like environment was unable to induce apoptosis in the umbilical cord blood cells. Conclusions: Our data show relevant asymmetry between maternal and fetal blood cell susceptibility to DNA damage and apoptosis induction. Maternal cells seem to be more predisposed to changes in an adverse glucose environment. This may be due to differential ability in upregulating multiple genes involved in the activation of DNA repair response, especially the BER mechanism. However if this study shows a more effective adaptive response by the fetal organism, it also calls for further studies to determine the limit of this response that definitely changes the fate of a fetus under these conditions of cellular stress.