Global cerebral ischemia is a clinical outcome of cardiac arrest. Cardiopulmonary cerebral resuscitation is essential for the treatment of cardiac arrest. However, patients experiencing the return of spontaneous circulation (ROSC) after cardiac arrest have high morbidity and mortality rates owing to a systemic ischemia/reperfusion response involving multiple organs. Brain injury is a major cause of morbidity and mortality and is responsible for approximately two-thirds of the deaths in the post-cardiac arrest period [1]. Global cerebral ischemia during cardiac arrest and reperfusion after ROSC result in heterogeneous injury to the brain, and the hippocampus and brain cortex are the most vulnerable areas [2]. Mild therapeutic hypothermia has been proven to be effective for neurological protection after cardiac arrest in both experimental and clinical studies [3], but some other current treatments are limited. Therefore, many pharmacological neuroprotective drugs that focus on specific brain injury mechanisms after cardiac arrest have been developed and have shown benefits in preclinical studies.

Carbon monoxide (CO) is best known as a toxic gas, which binds to hemoglobin and forms carboxyhemoglobin and severely impairs the respiratory system. However, CO is also generated physiologically in cells through the breakdown of heme by heme oxygenase enzymes and has potent antioxidant and anti-inflammatory activities. Therapeutic application of exogenous CO can be achieved by direct inhalation of CO gas, which has shown potent cytoprotective effects in liver transplantation, lung injury, and stroke. However, the applicability of gaseous CO is limited owing to its toxic effects with prolonged exposure and the difficulty in controlling the gas [13, 14]. Therefore, CO-releasing molecules (CORMs) were developed to allow selective delivery and local release of CO from a nontoxic prodrug, which has been shown to be a valid alternative to the use of gaseous CO. A metal carbonyl complex tricarbonyldichlororuthenium(II) dimer known as CORM-2 can efficiently release defined amounts of CO and shows biological activities, including protection of cardiac function, attenuation of liver inflammation, and improvement in ischemia/reperfusion outcomes, without significant toxicity [15-17]. Importantly, CORM-2 treatment is associated with minimal formation of carboxyhemoglobin [13], suggesting that it is a safer alternative to CO gas inhalation.

Male Sprague-Dawley rats (body weight, 370-420 g) were purchased from the Medical Experimental Animal Center of Guangdong Province (Guangzhou, China). Animals were maintained on laboratory chow and housed in a specific pathogen-free room at a constant temperature (20-22°C) with 10 h of light and 14 h of dark exposure. All animal studies were approved by the Institutional Animal Care and Use Committee of Sun Yat-sen University, and all experiments were performed in accordance with the National Institutes of Health guidelines for the care and use of laboratory animals.

Cardiac arrest was induced by asphyxia and this procedure has been described in detail previously [19]. Briefly, after an overnight fast except for free access to water, the rats were anesthetized by intraperitoneal injection of pentobarbital sodium (45 mg/kg). The trachea was orally intubated with a 14-gauge cannula (Abbocath-T, USA). A 23-gauge polyethylene-50 (PE-50) catheter (Abbocath-T, USA) was advanced through the left femoral artery for measuring blood pressure. An additional 23-gauge PE-50 catheter was advanced through the left femoral vein into the inferior vena cava for infusing the CORM-2 or placebo. Mean arterial pressure (MAP) was measured using a pressure transducer (BD, Germany). A conventional electrocardiogram lead II was continuously recorded. Hemodynamic data were continuously measured and recorded in a computer-based data acquisition system (WinDaq acquisition system, USA).

Asphyxia was induced by arterial injection of vecuronium (1 mg/kg) and discontinuation of ventilation. Cardiac arrest was defined as a MAP of ≤20 mmHg, which occurred approximately 4.5 min after asphyxia. After 6 min of cardiac arrest, cardiopulmonary resuscitation (CPR) was started. ROSC was defined as the return of supraventricular rhythm with a MAP of ≥60 mmHg for a minimum of 5 min. Mechanical ventilation was continued for 1 h after ROSC, during which FiO2 was 100% at 30 min, 50% at 20 min, and 30% at 10 min.

Thirty minutes after ROSC, the CPR+CO group rats received a continuous intravenous infusion of CORM-2 (or iCORM-2) at a rate of 10 mg/kg/h for 30 min (5 mg/kg) according to the dose as previously described [20]. Meanwhile, the control and CPR rats received a placebo (vehicle dimethyl sulfoxide with 0.9% NaCl solution) at a rate of 4 mL/kg/h.

Neurologic deficit scores (NDS) were measured by 2 investigators who were unaware of the group identities, as previously described [21]. NDS assessment involves the scoring of 19 items including arousal, reflex, motor, sensory, and balance responses, resulting in scores ranging from 0 (brain death) to 80 (normal brain function). In this study, dead rats were excluded from the NDS assessment.

Intravenous blood was obtained from the inferior vena cava. After whole blood collection, the blood was allowed to clot by leaving it undisturbed at room temperature. The clot was removed by centrifugation at 1500 g for 15 min and the serum was stored at -80°C until use. Serum S-100B concentrations were determined using a rat S-100B enzyme-linked immunosorbent assay kit (Cusabio, China) according to the manufacturer instructions.

ATP levels in brain tissues were measured using an ATP assay kit (Beyotime, China). Briefly, brain tissues were harvested and homogenized in an ice-cold ATP-releasing buffer and then centrifuged at 12,000 g for 5 min. After centrifugation, the supernatant was transferred to a new tube for ATP testing. Luminescence from a 100 μL sample was assayed in a luminometer (Molecular Devices, SpectraMax M5) together with 100 μL of ATP detection buffer and was then normalized by protein concentration.

Brain tissues were harvested and immediately fixed in 4% formaldehyde in 0.1 mol/L phosphate buffer. The paraffin-embedded brain tissues were cut into 5-μm sections. Nissl staining (Beyotime, China) and TUNEL assay (Roche, USA) were performed for in situ detection of neuronal injury, according to the manufacturer instructions. Seven fields of vision (40× magnification) in the hippocampal CA1 area were randomly selected from each brain tissue sample, and the Nissl- or TUNEL-stained neuronal cells were counted.

The brain hippocampus area was isolated and immediately fixed in cold 2.5% glutaraldehyde with 0.1 mol/L cacodylate buffer (pH 7.4), post-fixed in 1% osmium tetroxide, dehydrated, and embedded in Epon. According to the standard stereological principle of randomization, ultrathin sections (60-80 μm) were randomly cut regardless of the orientation and mounted on copper grids, stained with lead citrate and uranyl acetate, and then viewed using a transmission electron microscope (FEI, Tecnai G2).

The brain tissues were homogenized in radioimmunoprecipitation assay buffer, and the lysates were cleared by centrifugation (14,000 rpm) at 4°C for 30 min. Protein samples (approximately 40 μg each) were separated on a 10% sodium dodecyl sulfate-polyacrylamide gel, and the fractionated proteins were transferred to polyvinylidene difluoride membranes. After blocking the nonspecific binding sites with 5% nonfat milk for 60 min, the membranes were incubated overnight at 4°C with primary monoclonal antibodies against PGC-1α (Cell Signaling Technology, 1:1000 dilution), NRF-2 (Santa Cruz, 1:1000 dilution), and α-tubulin (Cell Signaling Technology, 1:5000 dilution). Next, the membranes were subjected to three 15-min washes with Tris-buffered saline and Tween 20 (TBST) and then incubated with horseradish peroxidase-conjugated secondary antibody (1:2000 dilution) for 45 min at room temperature. The membranes were washed 3 more times with TBST and developed using an enhanced chemiluminescence system (Cell Signaling Technology).

Total DNA (genomic and mitochondrial) was extracted from brain tissues by using the QIAamp DNA mini kit (Qiagen, Germany). The relative mitochondrial DNA (mtDNA) copy number was measured by real-time PCR using SYBR and corrected by simultaneous measurement of nuclear DNA. The forward and reverse primers for mtDNA, which are complementary to the sequence of the mitochondrial cytochrome c oxidase subunit II gene, were 5´-TTGGTCTACAAGACGCCACA-3´ (forward) and 5´-CGGTTAATACGGGGTTGTTG-3´ (reverse), respectively. The 5´-GAGGATGAGGTGGAACGTGT-3´ (forward) and 5´-GGACCTGGCTGTATTTTCCA-3´ (reverse) sequences, complementary to the 18S gene, were the primers used for the detection of nuclear DNA. The relative mtDNA copy number was normalized against the nuclear-encoded 18S gene. The relative fold change was then calculated using the 2-ΔΔCt method.

All measurement data were presented as mean ± standard deviation (SD), and statistical analyses were performed using SPSS version 19.0 for Windows. An unpaired t test was used to compare the same parameters between 2 groups, and one-way analysis of variance was used to compare the same parameters among 3 groups. Differences between pairs of means were assessed post hoc using Tukey's test. Fisher's exact test was employed to compare the NDS between the groups. Differences in the survival rates between the groups were compared using Kaplan-Meier survival analysis. A P value of < 0.05 was considered statistically significant.

CORM-2 treatment was used to explore the effects of CO on neurological functions after cardiac arrest in rats. To exclude direct effect of CORM-2 to the brain function in the rats, we first used iCORM-2 to treat the rats and detected its effects to the rats. The results demonstrated that the iCORM-2 treatment has no effect on brain NDS, S-100B levels, ATP levels and mitochondrial RCRs (Fig. S1A-D). However, The CORM-2 treatment results showed that CO increased NDS (Fig. 2A) and decreased S-100B levels (Fig. 2B) significantly at 24 h after ROSC. Kaplan-Meier survival analysis showed that CO treatment significantly increased the 3-day survival rates of the rats after ROSC (Fig. 2C). Taken together, these data suggest that CO treatment improves neurological outcomes after cardiac arrest. 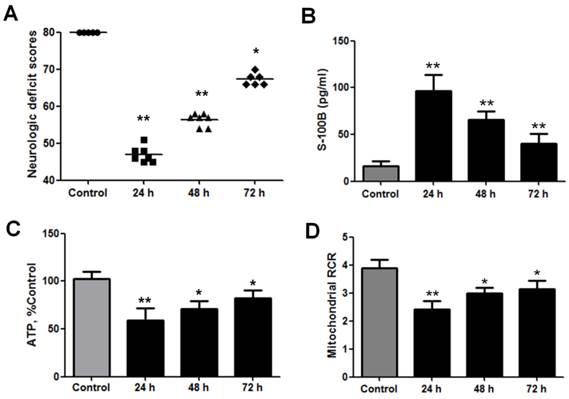 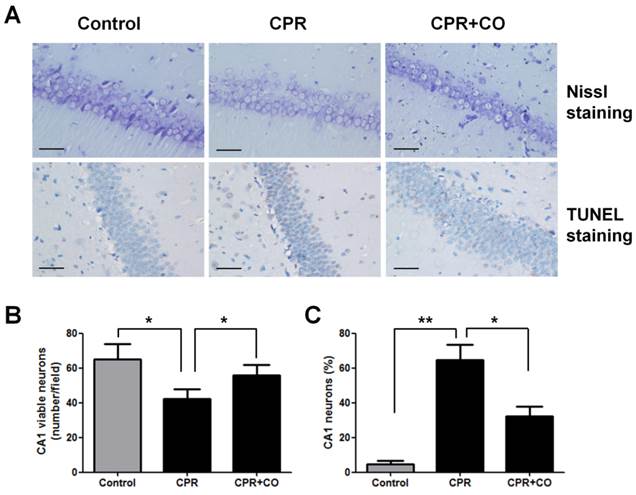 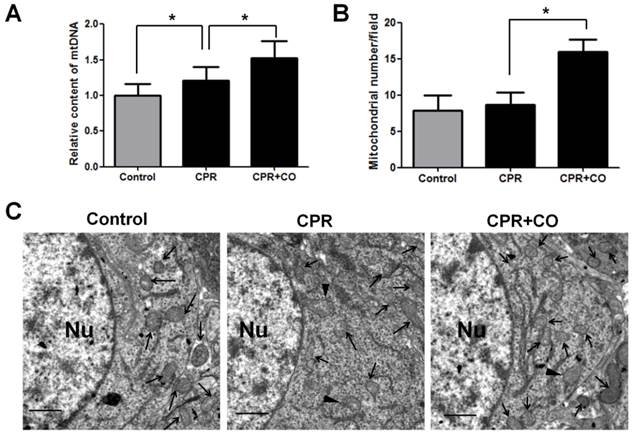 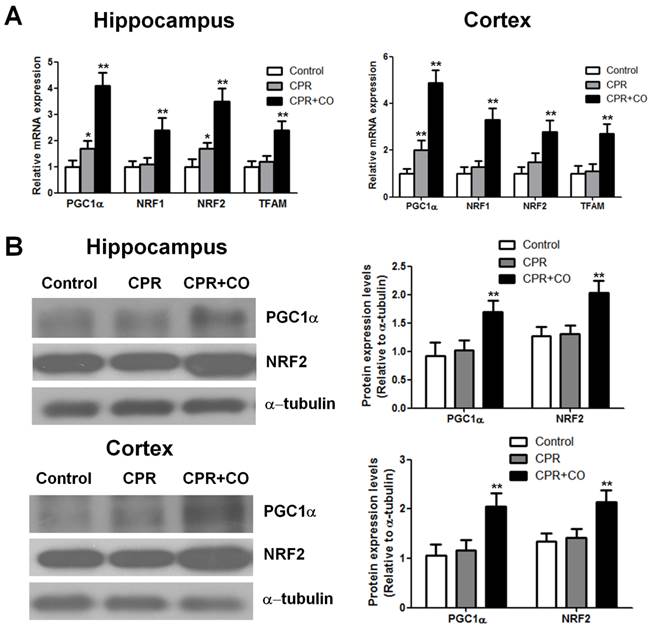 In conclusion, our study demonstrated that CO treatment improved neurological outcomes after cardiac arrest and resuscitation by maintaining mitochondrial function by improving mitochondrial biogenesis. We consider that mitochondria-targeted therapy is a new intervention for brain injury during resuscitation and that CO may be a promising candidate for the treatment of brain injury after cardiac arrest and resuscitation. However, determination of the optimal dose of CO is important to achieve the therapeutic benefits effects of CO. At low concentrations, CO shows cytoprotective on effects and can activate distinct endogenous cell defense pathways, whereas at high concentrations, it may show cytotoxicity. Thus, further studies are needed to optimize the therapeutic dose of CO for brain injury after cardiac arrest to achieve more potent therapeutic effects.