Pork is the most widely consumed meat in the world. In the field of biomedicine, pigs are anatomically and physiologically analogous to humans. Knowledge of muscle development in pigs is important to improve production and quality of pork and provides understanding of human muscle disease. Myogenesis is an important biological process in all stages of skeletal muscle growth [1, 2]. During myogenesis, myoblasts proliferate, withdraw from the cell cycle, and differentiate to form myotubes [3]. Myogenesis is a tightly regulated process that is promoted mainly by basic helix-loop-helix (bHLH) factors including MyoD, myogenic factor 5, myogenin, E-proteins, and myocyte enhancer factor 2 (MEF2) [4]. MicroRNAs (miRNAs) are involved in regulating various biological processes, including cell proliferation and differentiation, and the function of a subset of miRNAs during muscle development has been well established [5].

Clearly, a complete understanding of the roles of miRNAs in myogenesis is imperative for elucidating skeletal muscle growth. In this study, we profiled the expression patterns of 273 miRNAs in longissimus dorsi muscle of pigs during postnatal growth and identified a set of development-associated miRNAs. Of these, miR-195 and miR-497 (hereafter called miR-195/497) were strongly upregulated in an age-dependent manner. MiR-195/497 are known cancer repressors that govern the expression of many cell-cycle-associated genes [6-8]. Recently, miR-195/497-mediated myogenic proliferation and renewal have been characterized during muscle development [9, 10]. Here, we revealed the role of miR-195/497 in myotube formation during myogenesis.

The high-mobility group A1 gene (Hmga1) is an architectural transcription factor that participates in various nuclear processes that modulate numerous biological processes, including myogenic differentiation [11, 12]. In this study, manipulating the activity of miR-195/497 showed that they regulate the Hmga1 expression in muscle cells. We found that in myoblasts, HMGA1 induced the expression of Id3, one of the major repressors of cell differentiation.

The castrated male hybrid pigs (Landrace × Large White × Duroc) were obtained from College of Animal Science of South China Agricultural University. Feeding conditions and experimental designs have been detailed in the study of Wu et al. [13]. Briefly, the pigs were housed in a controlled environment and were provided free access to food and water according to the NRC2012 (Nutrient requirements of swine, 2012). We collected the porcine longissimus dorsi muscles at postnatal days 35 (weaning), 63 (nursery), 98 (grow-finish), and 161 (reach market weight) with six pigs in each group. The C57BL/6 male mice were purchased from the Guangdong Medical Laboratory Animal Center. Mouse skeletal muscles were collected at postnatal days 2 (newborn), 14 (suckling), 28 (weaning), 42 (sexually mature) and 63 (adult). All the protocols were approved by the Animal Ethical and Welfare Committee of Shenzhen University (Approval No. AEWC-2014-001004).

Hmga1 overexpression plasmid: The sequences of wild-type Hmga1 were amplified from the cDNA from C2C12 cells using primers Hmga1-F (5′-CACCGAATTCAGTCGGGGCTATTTCTGGTGTTGGC-3′) and Hmga1-R (5′-CACCGGATCCGCTGGTGCCTGGTGCGGTAGTGTGC-3′). The PCR products were then subcloned into the pLVX-puro vector (Clontech, Mountain View, CA, USA).

miRNA dTuD inhibitor plasmids: miRNA inhibitors against miR-195 or miR-497 were generated using the two-step PCR method as detailed in our previous study [14].

Total RNA was extracted with RNAiso Reagent (TaKaRa, Dalian, China) following the manufacturer's instructions. The expression levels of the miRNAs were evaluated with our previously developed S-Poly(T) Plus method [15, 16] (Geneups, Shenzhen, Guangdong, China), using SNORNA202 and SNORNA234 as the porcine and mouse miRNA endogenous references, respectively. Briefly, RNA are polyadenylated and reverse-transcribed into cDNA. The RT primer consists of a universal reverse primer sequence, a universal Taqman probe sequence and 17 bases that are complementary to target miRNA with tailed poly(A). The PCR reactions were carried out in the StepOnePlus Real-Time PCR System (Applied Biosystems, Grand Island, NY, USA) with a miRNA-specific forward primer and a universal reverse primer. The primers used can be found in Supplementary Table 1.

3.1. miR-195/497 were upregulated in skeletal muscles during postnatal growth

To explore muscle development-associated miRNAs, we employed S-Poly(T) Plus quantitative real-time PCR to analyze the temporal expression patterns of database-annotated pig miRNAs in longissimus dorsi muscle from 35 to 161 postnatal days. Of the 273 analyzed miRNAs, 42 were differentially expressed by more than 2.5-fold between 35 and 161 days (Fig.1A). After two rounds of screening, 9 miRNAs were downregulated during myogenesis (Fig.1B and C). 33 miNRAs were upregulated during myogenesis and 14 miRNAs showed a robust and progressive increase with age (Fig. 1D and E). MiR-195, miR-497 and miR-29c were the three most prominently upregulated miRNAs (Fig.1E). Because miR-195/497 are both members of the miR-15 family, we performed a simultaneous study of the roles of miR-195/497 in other pig skeletal muscles. Meanwhile, we found that miR-195/497 were upregulated in semitendinosus, semimembranosus, gluteus medius, and triceps brachii muscles during postnatal development (Fig. 1F and G). The upregulation of miR-195/497 was also found in mouse hindlimb muscle during postnatal development (Fig. 1H and I). These findings show that the upregulation of miR-195/497 is associated with postnatal development. Moreover, mouse skeletal myoblasts (C2C12 cells) proliferate in GM, withdraw from the cell cycle, and differentiate to myotubes when the culture is shifted to DM. As shown in Fig. 1J and K, miR-195/497 were induced in C2C12 cells by DM. Therefore, the upregulation of miR-195/497 is also associated with myogenic differentiation. 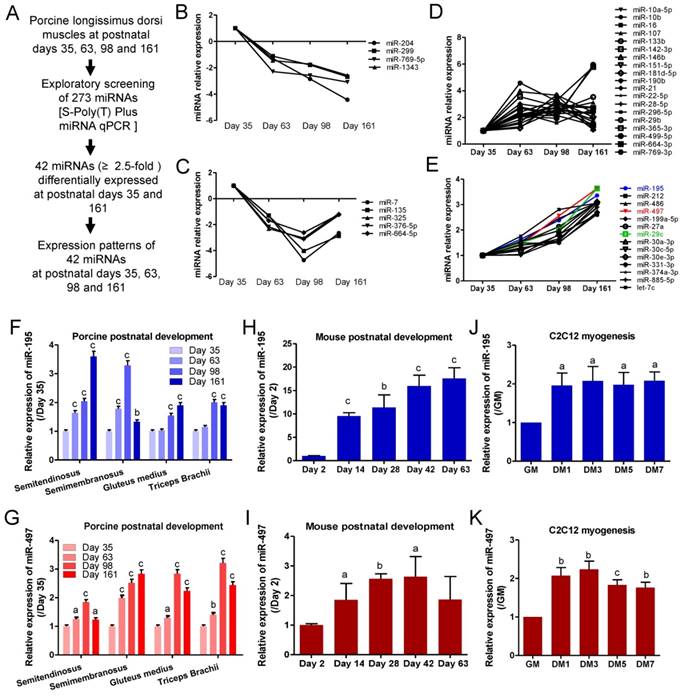 MiR-195/497 are known tumor-suppressive miRNAs and their anti-proliferative functions have been reported in many cancer cells, including breast cancer [6], hepatocellular carcinoma [7], and thyroid cancer cells [8]. miR-195/497 have been reported to regulate myoblast proliferation and self-renewal through regulating the cell cycle [9, 10]. Here, we confirmed the anti-proliferative activities of miR-195/497 in vitro by transfecting miRNA mimics and inhibitors of miR-195/497 in C2C12 myoblasts. Quantitative PCR confirmed the efficiency of miRNA mimics or inhibitors on miR-195/497 expression in myoblasts (Fig. 2A and B). The EdU incorporation assays showed that mimics of miR-195 or miR-497 reduced cell proliferation (0.63-fold, P = 9.1 E-05 and 0.41-fold, P = 6.3 E-05, respectively) compared with the controls (Fig. 2C, Supplementary Figure 1a). In contrast, synthetic inhibitors against miR-195 or miR-497 had the opposite effect (1.29-fold, P = 0.0051 and 1.37-fold, P = 0.0163, respectively; Fig. 2D, Supplementary Figure 1b).

We next assessed the function of miR-195/497 in myogenic differentiation, although Wei et al. [10] reported that miR-195/497 have no effect on myotube formation. Because myogenesis is regulated by a series of muscle-specific regulatory genes such as myogenin, we performed a myogenin promoter-driven luciferase assay. We found that the depletion of miR-195/497 repressed the luciferase activity (0.23-fold, P = 1.14E-10 and 0.46-fold, P =1.05E-05, respectively; Fig. 2E), indicating miR-195/497 had positive effects on myogenic differentiation in C2C12 myoblasts. This is further confirmed by western blot that the level of myogenin protein was lower in C2C12 cells transfected with the inhibitors of miR-195/497 (Fig. 2F). Moreover, immunostaining assays showed that inhibition and overexpression of miR-195/497 repressed and enhanced the formation of myotubes, respectively (Fig. 2G). Therefore, miR-195 and miR-497 both are required for myogenic gene expression and myotube formation on the skeletal muscle cells. 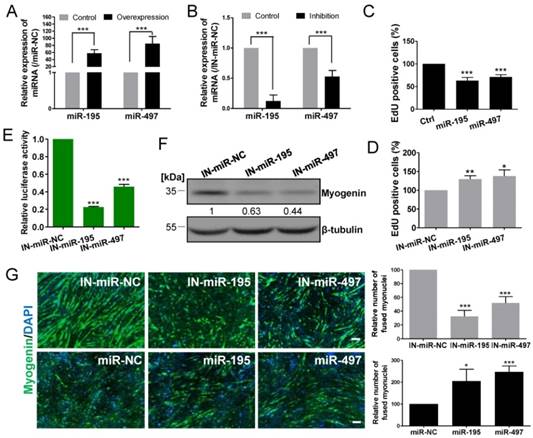 3.3. HMGA1 represses myogenic differentiation and is a common target of miR-195 and miR-497

We investigated the possible mechanism by which miR-195/497 modulate myogenesis. Based on the miRWalk database [17], miR-195 and miR-497 had 45 common predicted targets (Fig. 3A), including Hmga1 whose expression is required for embryonic stem cell differentiation [18]. The 3' UTR of Hmga1 contains one putative miR-195 and miR-497 binding site (Fig. 3B), which was conserved among vertebrates (Fig. 3C). Consistent with the previous study [12], the abundance of the HMGA1 protein was reduced in C2C12 cells after the induction of the myogenic program (Fig. 3D), which is opposite to the upregulated expression of the miR-195/497. The pattern of myogenin abundance confirmed the state of differentiation (Fig. 3D). These findings prompted us to investigate whether miR-195/497 regulated the expression of HMGA1 during myogenesis. 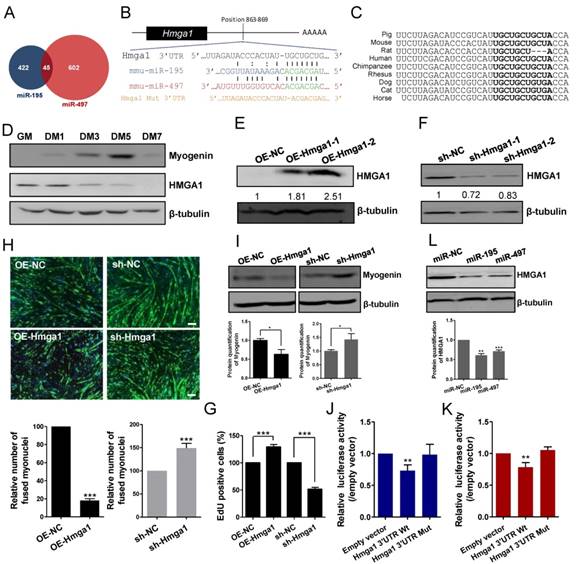 HMGA1 proteins have been shown to regulate global chromatin composition and functions as repressors in myogenic differentiation through regulating the myogenic gene expression [12]. Little is known about its role in myogenic proliferation and myotube formation. We therefore generated C2C12 myoblasts stably expressing Hmga1 or silenced Hmga1 (sh-Hmga1). The efficient overexpression and silencing of Hmga1 were confirmed by western blot analysis (Fig.3E and F). We found that the overabundance of HMGA1 in C2C12 cells increased the cell proliferation rate (1.29-fold, P = 3.43E-07; Fig. 3G), blocked myotube formation (Fig. 3H). Consistent with the previous study [12], overexpression of HMGA1 reduced the myogenic genes such as myogenin (Fig. 3I). In contrast, the silencing of Hmga1 repressed the cell proliferation rate (Fig. 3G), promoted myotube formation and increased myogenin abundance (Fig. 3I). Therefore, HMGA1 and miR-195/497 have opposite functions in cell myogenesis. 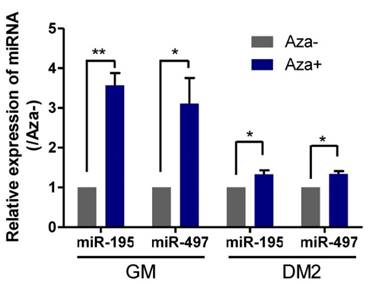 Our miRNA screening detected 42 miRNAs as development-associated miRNAs, and about 30% of these miRNAs (miR-21, miR-27a, miR-29b/c, miR-30a/c/e, miR-133b, miR-135, miR-199a, miR-206, and miR-486) have been previously reported to play important roles in muscle development and differentiation [24-28]. For example, miR-21 was found to enhance the activity of PI3K/Akt/mTOR signaling by targeting the transforming growth factor TGFβI during porcine skeletal muscle development [24]. MiR-206 and miR-486 were shown to induce C2C12 myogenic differentiation by targeting paired box Pax7 [28]. Our results indicate the miR-195 and miR-497 can join the collection of muscle-restricted miRNAs with roles in regulating myogenesis. Whether the other 70% of the miRNAs modulate muscle development remains to be seen.

miR-195/497 have been reported to regulate myoblast proliferation and self-renewal through regulating the cell cycle [22]. Wei et al. [10] recently reported that forced expression of miR-195/497 in C2C12 cells blocked the G1-S phase transition. Skeletal muscle is in some ways similar to cardiac muscle. In the neonatal rat cardiomyocyte and myoblast cell line H9c2, miR-195 inhibited mitotic progression by blocking cells in the G2 phase [29]. Indeed, miR-195/497 were shown to engage a subset of cell cycle regulators such as checkpoint kinase 1 [29], cell division cycle 25a/b, G1/S-specific cyclin-D1/2 [22], and cyclin E1 [10]. In this study, we identified a novel target gene Hmga1, which encodes HMGA1, which has been reported to maintain proliferation in papillary carcinoma and gastric and colorectal cancer cells [30, 31]. We showed here for the first time that an increased abundance of HMGA1 increased the proliferative rate of myocytes (Fig. 3). The powerful induction of cell cycle withdrawal before terminal differentiation by miR-195/497 likely involves the actions of many target genes in myocytes.

Deficiencies in muscle differentiation-induced (MDI) miRNAs such as miR-26 and miR-206 have been found to delay the normal kinetics of muscle regeneration after injury in mice [35, 36]. Indeed, accumulation of myocytes and the delay of novel myofiber formation are commonly observed in mice lacking MDI miRNAs [35, 36], indicating an accumulation of myocytes can block the transition from proliferation to differentiation. Although our results in vitro show the contributions of miR-195/497 to both proliferation and differentiation, further studies using detailed analysis of the mechanisms of miR-195/497 and their targets in mice lacking miRNA in the skeletal muscle injury model are warranted.

Proposed model of the miR-195/497-HMGA1-Id3 regulatory axis in myogenesis. In proliferating myoblasts, HMGA1 is abundant and drives the expression of Id3, which prevents the heterodimerization of MRF (myogenic regulatory factors) and E protein, which in turn represses the expression of muscle genes. In differentiating cells, miR-195/497 are highly expressed and repress the expression of Hmga1. As a result, HMGA1 is less abundant, and the complex of MRF and E protein forms and subsequently binds to the promoter of muscle genes, thereby inducing myogenic differentiation. 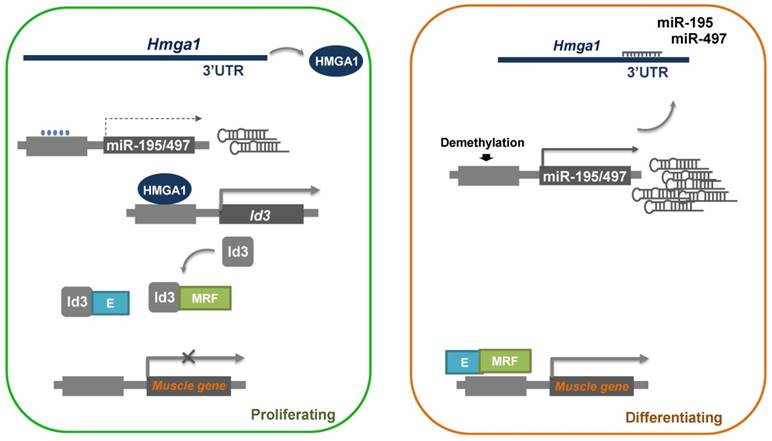 A previous study showed that miR-195/497 were upregulated in muscle stem cells during postnatal development and induction of miR-195/497 in stem cells resulted in cell quiescence [22]. Although, we showed that expression of miR-195/497 can be regulated by methylation. However, this effect may be indirect such as over-expression of MyoD or other transcription factors. Here we demonstrated that the upregulation of miR-195/497 in myocytes contributed to the progression of differentiation. Therefore, miR-195/497 have different functional roles in muscle stem cell and myoblasts. Although a full understanding of the mechanism of postnatal muscle development remains elusive, the results of this and previous studies show that miR-195/497 are critical in regulating the cell cycle in the transition between cell cycle arrest and proliferation and from proliferation to differentiation during muscle development.