IFN-induced protein with tetratricopeptide repeats 2 (IFIT2), one of the most highly responsive interferon-stimulated genes, inhibits the proliferation and migration of cancer cells and regulates viral replication. IFIT2 has been demonstrated to be a cytoskeleton-associated protein that becomes enriched in the mitotic spindle of cells. However, the molecular mechanisms by which IFIT2 executes biological functions are largely unclear. The findings of this study showed that inhibiting the activation of proteasome led to the enrichment of IFIT2 and induced the aggregation of IFIT2 protein in the centrosome. Microtubule inhibitor colchicine and dynein inhibitor ciliobrevin inhibited the proteasome inhibitor-induced aggregation of IFIT2 protein in the centrosome. Intriguingly, IFIT2 and proteasome inhibitor worked together to induce the apoptosis of cancer cells. The results of the present study revealed that the inhibition of proteasome activity blocked the degradation of IFIT2 and promoted the aggregation of IFIT2 in the centrosome, which in turn induced cell apoptosis. In short, IFIT2 may be a potential target for cancer therapeutics.

Interferons (IFNs), a group of cytokines, harbor multiple functions including inhibiting viral replication and regulating differentiation, proliferation, and survival of various cell types, which have been used clinically as antivirus, antitumor, and immunomodulatory agents [1, 2]. IFNs play biological roles through stimulating gene expression by activating the Janus kinase/signal transducers and activators of transcription pathway. Genes induced transcriptionally by IFNs were referred to as IFN-stimulated genes (ISGs). Notably, more than 300 ISGs have been identified in the IFN-treated cells. Proteins that code by ISGs mediate the activation of IFNs by regulating transcription, translation, and signal transduction [3, 4]. IFN-induced protein with tetratricopeptide repeats 2 (IFIT2), known as ISG54, is one of the ISGs most responsive to IFNs.

The IFIT2 gene codes for a protein with nine tetratricopeptide repeats (TPR) motifs, which has also been designated as IFIT2 [5, 6]. TPR, a 34-amino acid motif folding into a helix-turn-helix, is most often present in cassettes of multiple repeats and mediates protein-protein interactions [7, 8]. Many TPR-containing proteins have been shown to specifically recognize their partners and form complexes such as molecular chaperones, anaphase-promoting complexes, and protein transport complexes [9-11]. IFIT2 was reported to interact with different proteins and RNA. IFIT2 regulates the functions of cell cycle, apoptosis, tumor colonization, and viral replication, which confer cellular resistance to viral infections and regulates proliferation, apoptosis, and migration of cancer cells [6, 12-14]. Moreover, IFIT2 has been demonstrated to be a cytoskeleton-associated protein. Colocalization of IFIT2 and β-tubulin and enrichment of IFIT2 in the mitotic spindle were observed in cells undergoing mitosis, which regulate the growth and migration of cells [15]. However, how IFIT2 regulates cell proliferation and by which molecular mechanisms it executes biological functions remain to be examined.

The IFIT2 cDNA was amplified from the leukemia cell line NB4 cells treated with all-trans retinoid acid for 72 h. The cDNA was subcloned into pEGFP-C1 and pIRES2-EGFP (Enhanced Green Fluorescent Protein) vectors to obtain pEGFP-IFIT2 and pIRES2-IFIT2-EGFP plasmids, respectively. The plasmids were then transfected into the 293T and HCT116 cells using the Lipofectamine 2000 system (Qiagen, Hilden, Germany), according to the manufacturer's instructions.

The cells cultured on coverslips were washed three times with PBS and fixed with 4% paraformaldehyde for 10 min at room temperature. After permeabilizing with 0.5% Triton X-100 in PBS for 5 min at room temperature, the cells were incubated with primary antibody diluted in 1% bovine serum albumin for 2 h at 37°C. Coverslips were washed five times in PBS with 0.2% Tween 20 and incubated at 37°C for 1 h with secondary antibodies and 4',6-diamidino-2-phenylindole. Coverslips were washed as indicated earlier and mounted on slides in 9:1 glycerol/PBS with 0.1% p-phenylenediamine. Finally, fluorescence images were captured using an Olympus BX51 microscope (Olympus Optical Co., Ltd. Japan) with a cold charge-coupled device (CCD) camera at 1000 times magnification.

pEGFP-IFIT2 plasmid was transfected into the HCT116 cells for 48 h to observe apoptosis in the IFIT2-aggregated cells. The cells were digested with trypsin and stained with Annexin V-PE after treatment with bortezomib for 24 h. GFP-IFIT2 and Annexin V-PE were observed using an Olympus BX51 microscope with a cold CCD camera at 400 times magnification.

All data were presented as mean ± standard deviation (n ≥ 3). A statistical analysis was performed using the Student t test. A value of P <0.05 was considered to be statistically significant. The SPSS13.0 software (SPSS Inc., IL, USA) was used for all analyses.

A plasmid pIRES2-IFIT2-EGFP containing the internal ribosome entry site (IRES) of the encephalomyocarditis virus between IFIT2 and EGFP coding region was constructed to investigate whether the degradation of IFIT2 is regulated in a proteasome-dependent mechanism. The IRES allows both IFIT2 and EGFP genes to be translated from a single bicistronic mRNA. The 293T cells transfected with pIRES2-IFIT2-EGFP were treated with MG132, a proteasome inhibitor, for 6 h to inhibit the activation of proteasome. The Western blot results showed that MG132 treatment induced the accumulation of IFIT2 protein significantly (Fig. 1A). IFNγ was used to induce the expression of endogenous IFIT2, and MG132 treatment increased the level of IFIT2 (Fig. 1B). Furthermore, a marked increase in the ubiquitinated IFIT2 was detected in the MG132-treated cells (Fig. 1C). These results suggested that proteasome regulates the degradation of IFIT2. 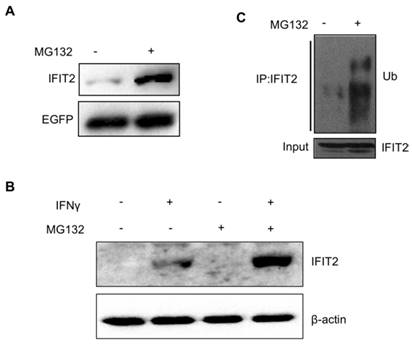 Inhibition of proteasome led to the aggregation of IFIT2 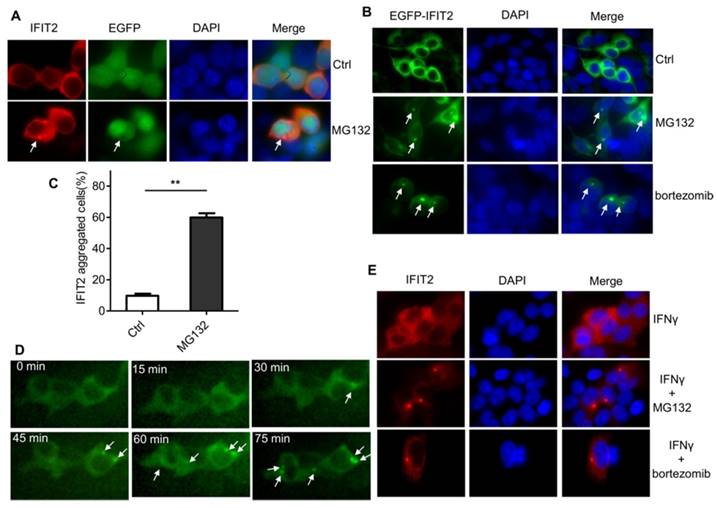 Considering that the IFIT2 aggresomes were localized close to the nucleus and one or two IFIT2 aggresomes were observed per cell (Fig. 2), this study hypothesized that the aggregation of IFIT2 might be associated with the centrosome. The fluorescent foci of EGFP-IFIT2 were detected in different phases of the cell cycle to validate this hypothesis. In the interphase, an IFIT2 aggresome was formed and localized close to the nucleus. However, two fluorescent foci of EGFP-IFIT2 on each side of the equatorial plate were detected in mitosis (Fig. 3A). These results suggested that IFIT2 might accumulate in the centrosome. γ-Tubulin is a marker of the centrosome; the colocalization of IFIT2 and γ-tubulin was further determined using the immunofluorescent assay. As shown in Figure 3B, IFIT2 and γ-tubulin were colocalized. This study found that the IFIT2 protein interacted with γ-tubulin in the MG132-treated cells using a coimmunoprecipitation assay, but the EGFP control could not interact with γ-tubulin (Fig. 3C). In short, proteasome inhibition leads to the interaction of IFIT2 and γ-tubulin, and the aggregated IFIT2 protein localizes in the centrosome.

In the cells, the microtubule motor protein dynein carries out ATP-dependent movement along microtubules and transports proteins toward the minus end of the microtubules [17]. Ciliobrevin D is a dynein inhibitor, which competes with ATP at the binding site of dynein and inhibits dynein-mediated transport [18]. The 293T cells transfected with EGFP-IFIT2 were preincubated with different doses of ciliobrevin D, and then treated with MG132. The aggregation of IFIT2 was observed, and the results showed that ciliobrevin D inhibited proteasome inhibition-mediated IFIT2 accumulation in a dose-dependent manner (Fig. 4B).

Aggregation of IFIT2 induced the apoptosis of cancer cells

This study investigated whether inhibiting the activation of proteasome could result in the aggregation of IFIT2 in cancer cells. The HCT116 cells were transfected with EGFP-IFIT2 and treated with MG132, and fluorescent foci of EGFP-IFIT2 were formed in the cells (Fig. 5A). MG132 also induced significant aggregation of endogenous IFIT2 in the HCT116 cells (Fig. 5B). As IFIT2 accumulated in the centrosome has an essential role in cell proliferation, it was suggested that IFIT2 aggregation might be involved in cell growth. The level of IFIT2 in the HCT116 cells was upregulated, and cleaved caspase3 and PARP were detected upon treatment with MG132 (Fig. 6A). Furthermore, the HCT116 cells were preincubated with IFNγ to induce the expression of IFIT2 and treated with or without MG132 for 24 h. Massive apoptotic cells were detected in the MG132-treated cells (Fig. 6B). The results of the immunoflurescence assay showed that Annexin V was strongly stained in the cells with IFIT2 aggregation, suggesting that the aggregated IFIT2 led to the apoptosis of HCT116 cells (Fig. 6C). Taken together, proteasome inhibitors induce the aggregation of IFIT2, which results in the apoptosis of cancer cells.

Aggregated IFIT2 protein interacted with γ-tubulin and localized in the centrosome. (A) IFIT2 aggregation in cells at different cell-cycle phases. (B) Colocalization of IFIT2 and γ-tubulin. (C) IFIT2 interaction with γ-tubulin. 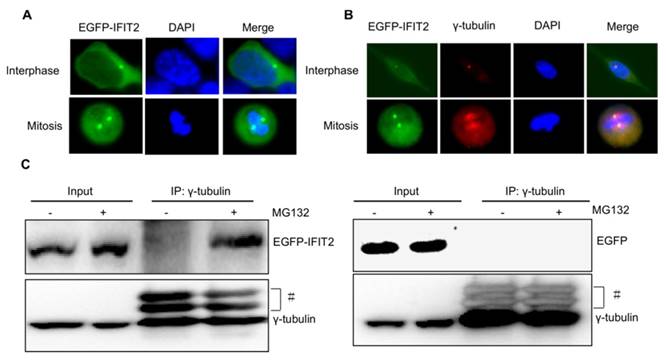 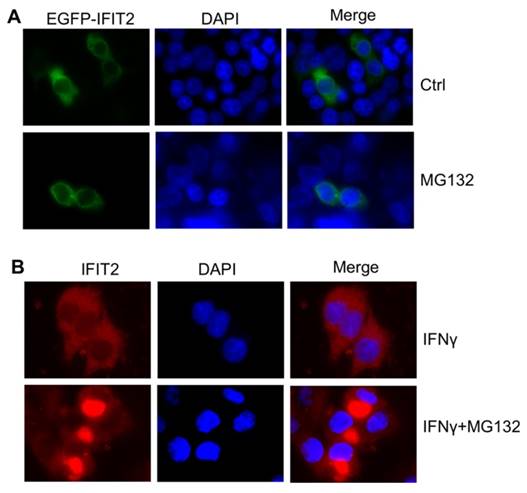 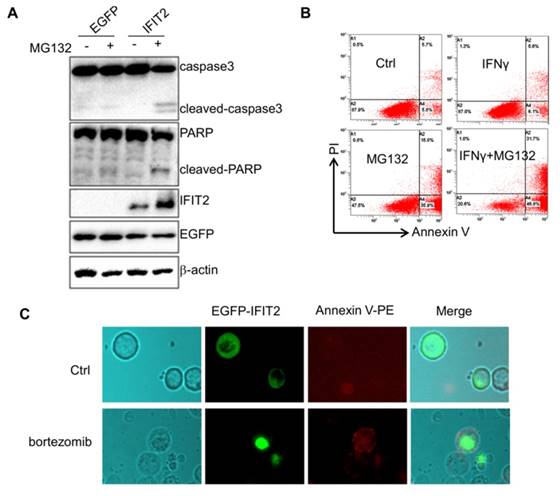 Aggresomes are first found to transport misfolded proteins to the microtubule-organizing center facilitating their clearance [25]. Except for misfolded proteins, the impairment of proteasome also leads to the transport of the ubiquitinated proteins toward the microtubule-organizing center to form aggresome, and triggers autophagy [23, 26]. Previous studies suggested that targeting both the proteasome-dependent pathways and the aggresome pathway in tumor cells with bortezomib could induce marked accumulation of polyubiquitinated proteins and significant cell stress, promoting, in turn, the activation of autophagy and apoptosis [27, 28]. IFIT2, an IFN-induced protein containing nine TPR domains, forms complexes by interacting with virus RNAs, other ISG proteins, or other binding partners to execute various functions including antiviral, antitumor, and as a regulator of transcription and translation [6]. The formation of aggresome of IFIT2 resulted in cell apoptosis. IFIT2 and inhibitors of proteasome induce cell apoptosis synergistically. In conclusion, events that induce the expression or accumulation of IFIT2 may have antitumor effects.

1. Reich NC. A death-promoting role for ISG54/IFIT2. Journal of interferon & cytokine research: the official journal of the International Society for Interferon and Cytokine Research. 2013;33:199-205

16. Dammermann A, Merdes A. Assembly of centrosomal proteins and microtubule organization depends on PCM-1. The Journal of Cell Biology. 2002;159:255-66