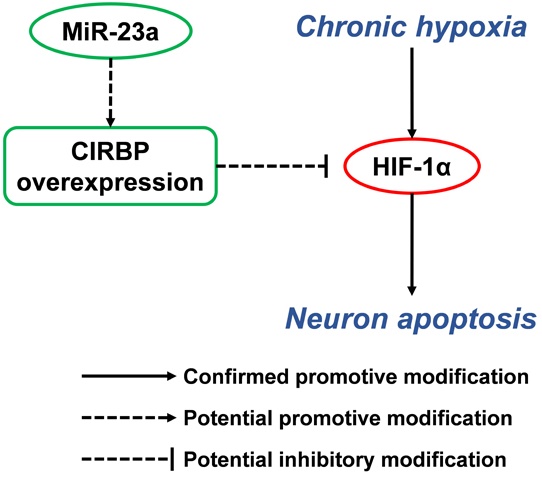 Background: Neuron apoptosis mediated by hypoxia inducible factor 1α (HIF-1α) in hippocampus is one of the most important factors accounting for the chronic hypobaric hypoxia induced cognitive impairment. As a neuroprotective molecule that is up-regulated in response to various environmental stress, CIRBP was reported to crosstalk with HIF-1α under cellular stress. However, its function under chronic hypobaric hypoxia remains unknown.

Objective: In this study, we tried to identify the role of CIRBP in HIF-1α mediated neuron apoptosis under chronic hypobaric hypoxia and find a possible method to maintain its potential neuroprotective in long-term high altitude environmental exposure.

Methods: We established a chronic hypobaric hypoxia rat model as well as a tissue culture model where SH-SY5Y cells were exposed to 1% hypoxia. Based on these models, we measured the expressions of HIF-1α and CIRBP under hypoxia exposure and examined the apoptosis of neurons by TUNEL immunofluorescence staining and western blot analysis of apoptosis related proteins. In addition, by establishing HIF-1α shRNA and pEGFP-CIRBP plasmid transfected cells, we confirmed the role of HIF-1α in chronic hypoxia induced neuron apoptosis and identified the influence of CIRBP over-expression upon HIF-1α and neuron apoptosis in the process of exposure. Furthermore, we measured the expression of the reported hypoxia related miRNAs in both models and the influence of miRNAs' over-expression/knock-down upon CIRBP in the process of HIF-1α mediated neuron apoptosis.