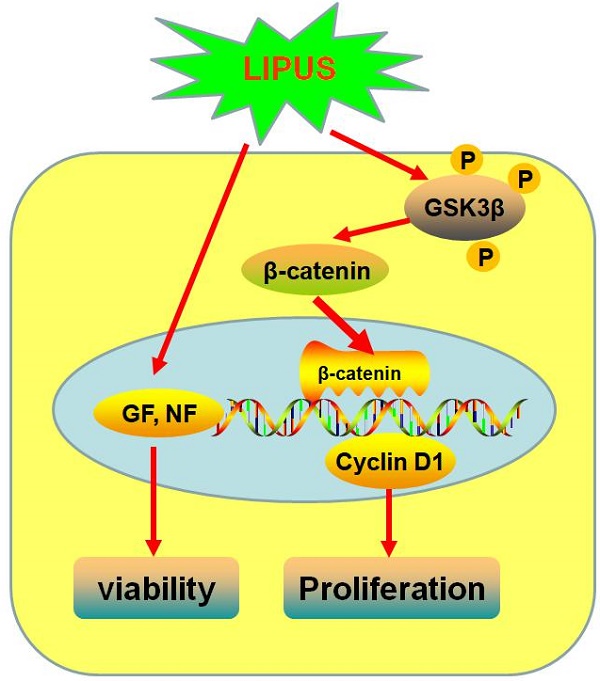 Background: It has been reported that ultrasound enhances peripheral nerve regeneration, but the mechanism remains elusive. Low-intensity pulsed ultrasound (LIPUS) has been reported to enhance proliferation and alter protein production in various types of cells. In this study, we detected the effects of LIPUS on Schwann cells.

Material and methods: Schwann cells were separated from new natal Sprague-Dawley rat sciatic nerves and were cultured and purified. The Schwann cells were treated by LIPUS for 10 minutes every day, with an intensity of 27.37 mW/cm2. After treatment for 5 days, MTT, EdU staining, and flow cytometry were performed to examine cell viability and proliferation. Neurotrophic factors, including FGF, NGF, BDNF, and GDNF, were measured by western blot and real-time PCR. GSK-3β, p-GSK-3β, β-catenin and Cyclin D1 protein levels were detected using a western blot analysis. The expression of Cyclin D1 was also detected by immunofluorescence.

Results: MTT and EdU staining showed that LIPUS increased the Schwann cells viability and proliferation. Compared to the control group, LIPUS increased the expression of growth factors and neurotrophic factors, including FGF, NGF, BDNF, GDNF, and Cyclin D1. Meanwhile, GSK-3β activity was inhibited in the LIPUS group as demonstrated by the increased level of p-GSK-3β and the ratio of the p-GSK-3β/GSK-3β level. The mRNA and protein expressions of β-catenin were increased in the LIPUS group. However, SB216763, a GSK-3β inhibitor, reversed the effects of LIPUS on Schwann cells.