Hepatocellular carcinoma (HCC) has become the second leading cause of cancer related death, with an increasing death rate in recent years. For advanced HCC, sorafenib is the first-line FDA approved drug, with no more than 3 months' overall survival advantage. Recently, a novel strategy has been proposed to improve sorafenib efficacy through enhancing the ability of sorafenib to induce cell death. STAT3 plays a key role in cancer development and recurrence by promoting cell proliferation, survival and immune evasion through its well-established function as a transcription factor in cancer. Notably, STAT3 transcription activity, indicated by its phosphorylation on Y705 is heterogeneous in different liver cancer cell lines. And sorafenib attenuates STAT3 phosphorylation on Y705. However, the role of STAT3 in sorafenib induced cell death is still largely unknown. Here, we show that liver cancer cells also exhibit heterogeneous sensitivities to sorafenib induced cell death, which co-relates with the STAT3-Y705 phosphorylation levels and JAK1/2 expression levels in Hep3B, Huh7 and HepG2 cells. Furthermore, overexpression or knockdown of STAT3 could switch HCC cells between resistant and sensitive to sorafenib induced cell death, which could be partially due to its regulation on Mcl-1, an anti-apoptotic protein. Finally, both inhibitors of STAT3 SH2 domain (S3i-201) or STAT3 upstream kinases JAKs (JAK inhibitor I) could synergistically enhance sorafenib induced cell death. Taken together, these data strongly suggest that STAT3 is not only a downstream effector of sorafenib, but also a key regulator of cellular sensitivity to sorafenib induced cell death, which provide support for the notion to develop STAT3-targeting drugs to improve clinical efficacy of sorafenib in liver cancer.

Hepatocellular carcinoma (HCC) is the sixth most common cancer worldwide, often accompanied by chronic liver disease due to viral hepatitis, alcohol abuse or non-alcoholic steatohepatitis [1]. Because liver cancer is an extraordinary heterogeneous malignant disease [2] and could be induced by multiple etiologies[3], treatment of liver cancer is usually unsatisfied and the five-year survival rate is only reaching 26% [4]. Until 2012, liver cancer has become the second leading cause of cancer related death [5].

The first line FDA-approved targeted drug for advanced hepatocellular carcinoma (HCC) is sorafenib, which was originally developed as an inhibitor targeting on Raf kinase, a key regulator of cell proliferation [6]. Pharmacological profile showed that sorafenib could also block multiple kinases including VEGFRs, PDGFRβ, c-Kit and RET in addition to Raf family members [7]. This property confers sorafenib as a powerful drug simultaneously targeting on multiple oncogenic kinases. As expected, preclinical data showed its competent inhibitory effect on tumor formation and progression both ex-vivo andin vivo, and FDA approved sorafenib as a targeted drug for advanced HCC in 2007 [8]. However, the clinical benefit of sorafenib treatment is still limited with no more than 3 months overall survival advantage [9].

The molecular mechanisms underlying sorafenib resistance in HCC are still largely unknown. Notably, sorafenib treated cancers rarely completely regressed and that sorafenib alone did not induce massive cell death [9]. Indeed, as a single agent, sorafenib weakly induced cell death, either apoptosis [10] or ferroptosis [11] in cell-type and drug-dose dependent manner. However, in combination with chemical inhibitors or shRNAs targeting on key regulators, sorafenib induces strong cell death in multiple HCC cell lines [12-15], indicating a potential to improve sorafenib efficacy against HCC through enhancing its ability to induce cell death. Therefore, identifying the key regulators and strategies to enhance sorafenib induced cell death might be the key to meet the challenges of advanced HCC treatment.

STAT3 (Signal Transducer and Activator of Transcription 3) is a pivotal transcriptional factor of multiple tumor promoting genes and anti-apoptotic genes, like Mcl-1 (myeloid cell leukemia sequence 1) [16-18]. In response to growth factors and inflammatory factors, STAT3 is activated through phosphorylation on 705th tyrosine and 727th serine, leading to its trans-localization from cytoplasm to nucleus [19]. In liver cancer cells, Sorafenib dephosphorylates and inhibits STAT3 activity through activating phosphatase SHP2 [13, 20], leading to down-regulation of Mcl-1 [21]. RFX-1/SHP-1 activation could also overcome sorafenib resistance by dephosphorylating STAT3 [22]. However, the role of STAT3 in determining cellular sensitivity to sorafenib induced cell death in HCC is still largely unknown.

Sorafenib is the first FDA approved targeted drug for advanced hepatocellular carcinoma [9]. However, the efficacy of sorafenib in HCC is still limited [9]. Recently, accumulating evidence showed that sorafenib could not only inhibit cell growth, but also be able to induce cell death [23]. In the light of heterogeneity of HCC cells, we examined the effect of sorafenib to induce cell death in different HCC cell lines. We found that different HCC cell lines exhibited heterogeneous sensitivities to sorafenib induced cell death. Hep3B cells were more sensitive to sorafenib induced cell death compared to Huh7 and HepG2 cells, indicated by microscopy observation (Figure 1A), pI/Hoechst staining assay (Figure 1B) and pI staining followed by FACS analysis (Figure 1C). Interestingly, STAT3 Y705 phosphorylation was much higher in Huh7 and HepG2 cells than that in Hep3B cells (Figure 1D). Supportively, STAT3 nuclear localization was much more intensive in Huh7 and HepG2 cells (Figure 1E). Since tyrosine kinase JAK and phosphatase SHP family are well-known regulators of STAT3 Y705 phosphorylation, we also examined the expression of JAK1/2 and SHP1/2. As shown in figure 1D, JAK1/2 expression was also lower in Hep3B cells than that in Huh7 and HepG2 cells. These data indicate that STAT3 activities might play a key role in cellular sensitivity to sorafenib induced cell death in HCC cells.

Taken together, these data demonstrate that STAT3 plays a key role in determining the cell sensitivity to sorafenib induced cell death in HCC cells.

JAK1/2-STAT3 pathway is associated with cellular sensitivity to sorafenib induced cell death. (A, B, C) Hep3B, HepG2 and Huh7 cells were treated with 5uM Sorafenib for 48hours. Cell death was monitored under microscopy (A), and cell death assay was performed by staining with pI and Hoechst 33342 followed by photograph under microscopy and analyzed by Image J (B) or staining with pI and analyzed by flow cytometry (C). (D) The expressing levels of JAK1, JAK2, STAT3, SHP1, SHP2, actin and phosphorylation levels of STAT3 were determined by western blot using the antibodies, respectively. (E) STAT3 localization was examined in Hep3B, Huh7 and HepG2 cells. 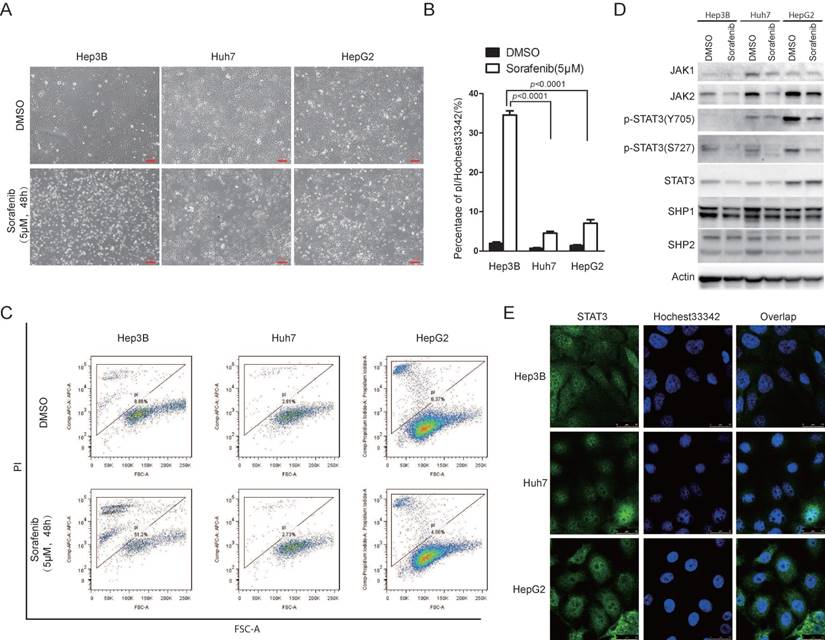 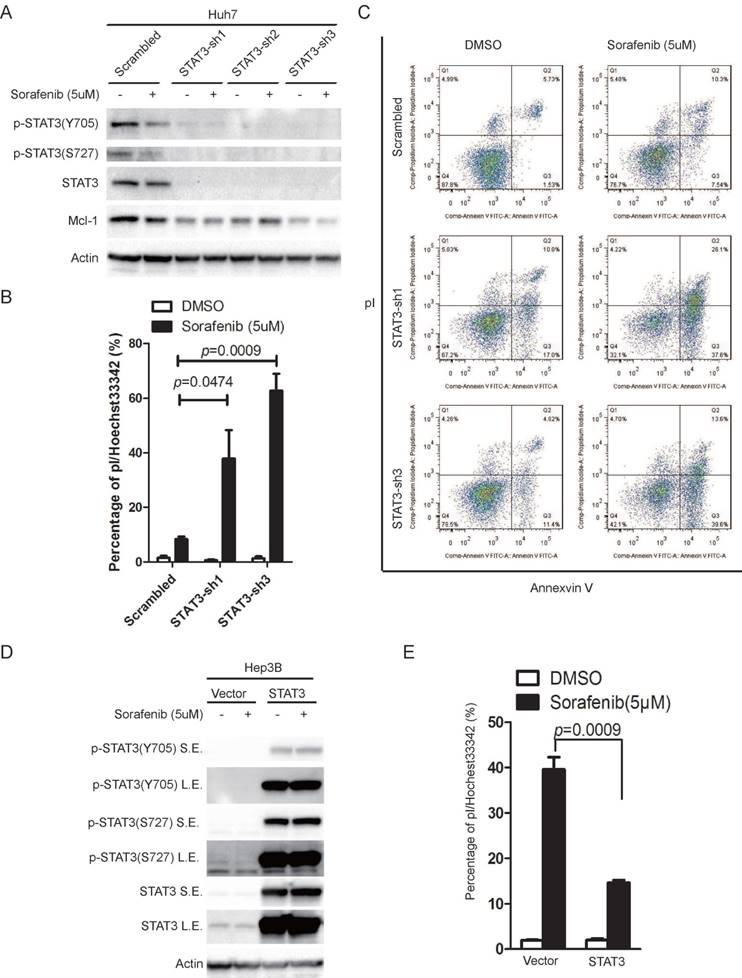 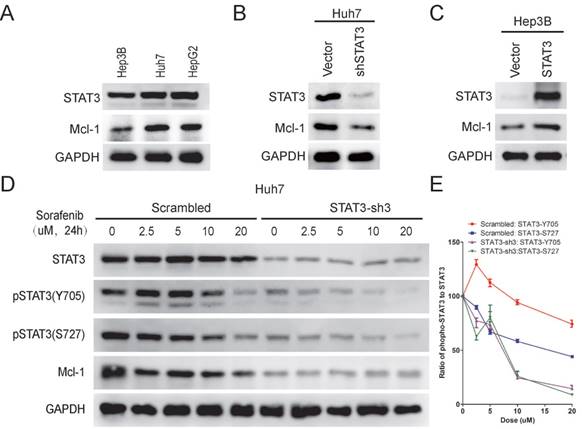 In order to investigate the effect of STAT3 inhibition on sorafenib induced cell death, we used a STAT3 inhibitor, S3i-201, which was identified through a structure-based virtual screening from the NCI chemical libraries [26]. Huh7 cells were treated with Sorafenib in the absence or presence of S3i-201. As shown in figure 4A and 4B, combination of S3i-201 with sorafenib lead to down-regulation of STAT3 phosphorylation and Mcl-1 expression, and shrinkage of Huh7 cells, while sorafenib or S3i-201 alone lead to reduction of cell density. Consistently, tetrazolium based cell growth assay showed that sorafenib or S3i-201 alone lead to inhibition of cell growth, while combination of both drugs completely blocked cell growth, as shown by CCK8 assay (Figure 4C). Annexin V/pI staining also showed that combination of S3i-201 could dramatically enhance the ability of sorafenib to induce cell death (Figure 4D and 4E). 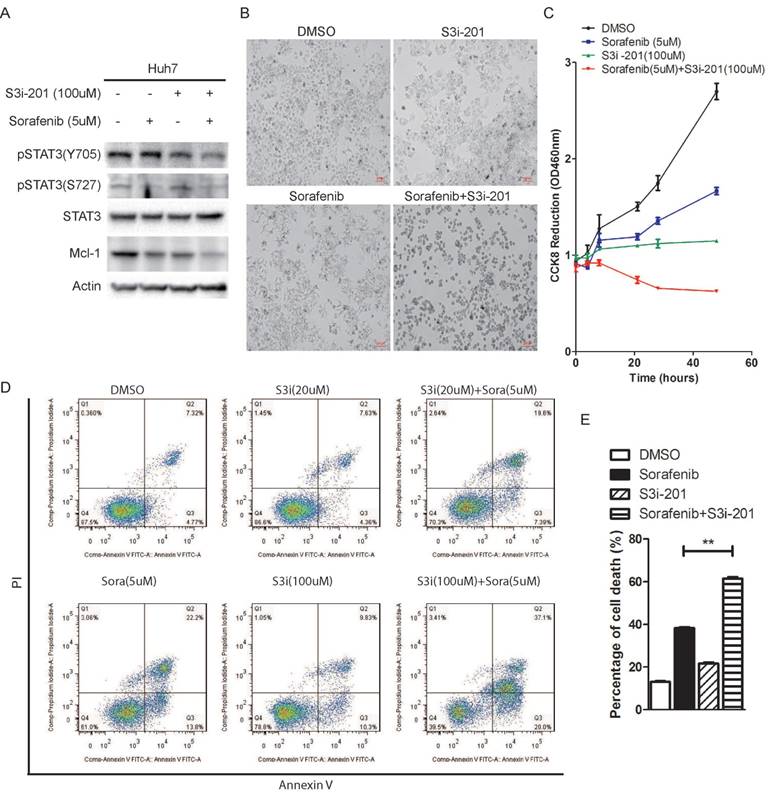 In contrast to most cancers, the incidence and death rate of liver cancer is increasing, in part due to the lack of novel and potent drugs and treatments. The first-line targeted drug for advanced HCC is sorafenib, which was approved by FDA in 2007 [9]. However its overall clinical benefit is still limited [28]. Thus, one of the major challenges for biomedical studies of sorafenib is to improve its efficacy against HCC. Accumulating evidences show that sorafenib is capable to induce cell death in high dose [21]. Therefore, identification of biomarkers and regulators in determining HCC cell sensitivity to sorafenib induced cell death might contribute to clinical benefit from sorafenib. 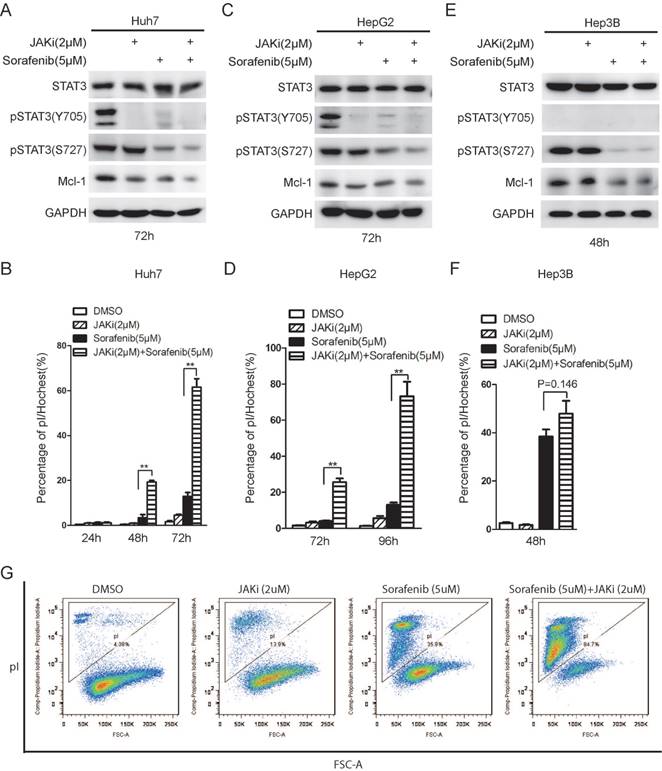 STAT3 inactivation is accompanied with down-regulation of multiple anti-apoptotic proteins, such as Mcl-1, survivin and Bcl-XL [16]. These genes serve as protective shield against spear of sorafenib. Indeed, our study also shows that Mcl-1 is tightly controlled by STAT3 expression. In concert with previous works, our data also show that sorafenib attenuates STAT3 phosphorylation on both 727th serine and 705th tyrosine, indicating STAT3 activities could be suppressed by sorafenib [20]. Taken together, it suggests that STAT3 might serve as a “bumper” to protect cancer cells from sorafenib. Recent researches identified many key factors playing similar roles in sorafenib induced cell death, such as Erk, AIB1 and Pin1 [29-31]. The expression or activities of these genes are also down regulated by sorafenib, while genetic or chemical inhibition of these genes could enhance sorafenib induced cell death. Interestingly, STAT3 could be phosphorylated by Erks [32], while AIB1 and STAT3 are documented to be regulated by Pin1 [33, 34], indicating that a network of genes might play a role of “bumper” in sorafenib induced cell death.

Cells were seeded in a 96-well plate and were treated as indicated. 10ul of CCK-8 was added into 90ul DMEM culture medium. Cells were then incubated at 37℃ and 5% CO2 for 1 hour. Measure the absorbance using Multi-scan GO (Thermo Scientific) at 450nm with 620nm as reference wavelength.

Data were expressed as means±s.e.m. The two sample t-test was used to compare differences between treated groups and their paired controls.