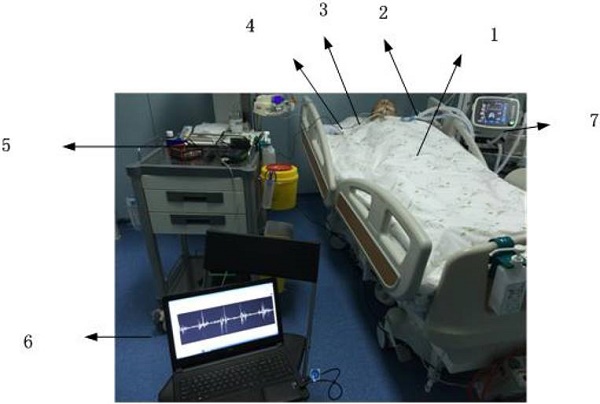 Sputum sounds are biological signals used to evaluate the condition of sputum deposition in a respiratory system. To improve the efficiency of intensive care unit (ICU) staff and achieve timely clearance of secretion in patients with mechanical ventilation, we propose a method consisting of feature extraction of sputum sound signals using the wavelet transform and classification of sputum existence using artificial neural network (ANN). Sputum sound signals were decomposed into the frequency subbands using the wavelet transform. A set of features was extracted from the subbands to represent the distribution of wavelet coefficients. An ANN system, trained using the Back Propagation (BP) algorithm, was implemented to recognize the existence of sputum sounds. The maximum precision rate of automatic recognition in texture of signals was as high as 84.53%. This study can be referred to as the optimization of performance and design in the automatic technology for sputum detection using sputum sound signals.

The vast majority of patients with mechanical ventilation in ICU are lack of the ability of self-expectoration for the establishment of artificial airway and coma position [1], so they depend on artificial secretion clearance. Sputum deposition in the airway can cause dyspnea and pulmonary infection [2, 3]. As a type of common complications of mechanically ventilated patients, the incidence of ventilator associated pneumonia (VAP) is as high as 68%, and the mortality is as high as 50-70% [4]. Secretion clearance is usually used to keep the respiratory tract clear and to improve alveolar ventilation and patients' breathe function. Thus, secretion clearance is one of the most important nursing interventions of ventilated patients' respiratory tract [5, 6].

As a type of biological signals, sputum sound is generated by the vibration of sputum in respiration. Sound signals produced by the sputum during inspiration and expiration form a powerful source of information about the condition of sputum deposition. Sputum sounds are empirically known to be closely correlated with airway conditions and they can assist to determine whether a secretion clearance is required. Sputum sound signals are able to be auscultated when sputum silt in the airway of the patients with mechanical ventilation. To ensure the health of patients with mechanical ventilation, it is important to recognize the existence of sputum timely. Chest auscultation is an inexpensive and usual way to evaluate the condition of sputum deposition. There are many limitations of the conventional method of auscultation with a stethoscope. As a subjective process, the result of the conventional method depends on the physician's own hearing, experience, and ability to differentiate different sound patterns. Moreover the human ear is not very sensitive to the lower frequency response of stethoscope [7].

Digital recording and analysis is a reliable and quantitative method for an objective assessment of sputum sounds for discrimination of sputum deposition. Machine learning has provided new insights into the analysis and classification of biological signals, such as lung sounds [8] and heart sounds [9, 10]. Many efforts have been reported in literature on the feature extraction and classification of biological sound signals [11].

Sputum sounds recorded from various subjects will be interfered by noise. Hence before processing, the signals were pre-processed so that they can be pure relatively. After pretreatment, the signals were decomposed into frequency subbands using discrete wavelet transform (DWT). A set of statistical features was extracted from the subbands to represent the distribution of wavelet coefficients. An ANN based system was implemented to distinguish the existence of sputum: yes or no. A schematic of the proposed method is shown in Fig. 1.

Because the sputum and lung sounds [12, 13] have similar characteristics, the feature extraction and classification method of the sputum sounds was developed using the feature extraction and classification of the lung sounds, which was verified by the authors' experimental study [12, 13]. The details of the method are described below.

In the experimental system for signal acquisition, a connector connects an artificial airway and an acquisition device (Figure 2). Through signal acquisition, signal amplifier and sound card, the respiratory sound signals of mechanical ventilated patients were collected in a computer with Adobe Audition. Recording of the signals was done at the Department of Pulmonology ICU, Beijing Chaoyang Hospital, Beijing, China. All recordings were made under the supervision of a senior physician specialized in pulmonology and respiratory care. The classification of the sputum sounds was done by the pulmonology group headed by the senior physician, and the signals were separated into sputum deposition and non-sputum deposition. The sound sample stored in the database is in the format of digital WAVE files. The WAVE format is time-based and contains uncompressed audio in the pulse-code modulation (PCM) format. The PCM audio is the standard audio file format for CDs, containing two channels of 44,100 samples per second, 16 bits per sample [14].

As an influential factor on the analysis and classification of signals, noise will affect the output obviously, especially in the studies on high-precision signal analysis. Noise from instruments such as ventilator, air-conditioner, etc., and other ambient noise may contaminate the sputum sound signals. To adapt the non-stationary signals, Chebyshev Filter, which has the property that minimizes the error between the idealized and the actual filter characteristics over the range of the filter, but with ripples in the pass-band [15], was used in this work.

The respiratory sound signals were high-pass filtered at 7.5 Hz to remove the DC offset and low-pass filtered at 2.5 kHz to avoid aliasing. The sampling rate of the respiratory sounds was 2450 Hz. After the pre-processing of original signals, relatively pure sputum sound signals were used in the following studies on feature extraction and analysis of sputum sounds.

Schematic of the analytic method. 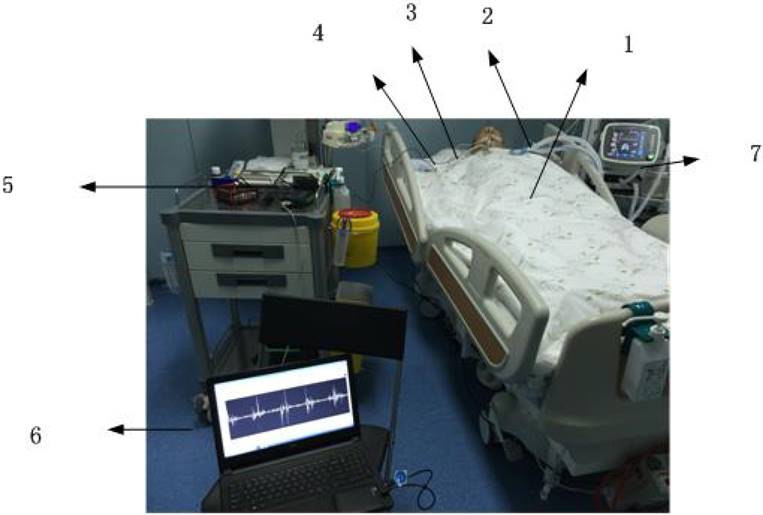 Fourier transform is usually used to convert a signal from the time domain to the frequency domain. When Fourier transform is applied on non-stationary signals, it does not provide enough information. Fourier transform can only reflect a signal's frequency domain, instead of showing the time domain. To overcome this drawback, we adopt short time Fourier transform (STFT) which uses a technique called windowing. STFT utilizes a single fixed window to map the signal into a two-dimensional space of time and frequency. Wavelet transform (WT) is equipped with time-frequency characteristics. Figure 3 shows the comparison between the analysis about the constant window regions used in STFT and the analysis about the variable window region used in WT.

The mathematical equation describing the continuous wavelet transform (CWT) of the signal x(t) is:

The quantity s, defined as the scaling parameter of the wavelet, can be considered to represent the inverse of frequency, and the dilation parameter. The wavelet is compressed when the scale is low. Similarly, it is stretched if the scale is high. That is also displayed in Fig. 3. Discrete wavelet transform (DWT) is used to sample the signal at discrete intervals when acquired by computers. When the signal is sampled at discrete intervals as in the case of acquisition by computers, discrete wavelet transform is used. 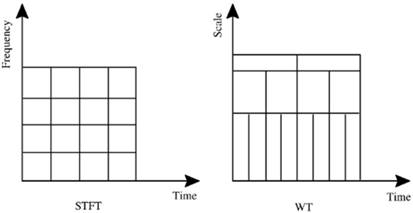 Wavelet basis, sym4, spline, and db5 were tested in this study, and the classification accuracy of db5 is maximal. Thus db5 was used as the wavelet basis in the following work. The wavelet decomposition of sputum sound signals is shown in Fig. 5.

The traditional features include mean value, quadratic mean, kurtosis, skewness, variance. They can be represented by the following equations.

where N is the length of signal.

, and is written as:

. To an admissible wavelet, the equation can be written as:

The energy of coefficient can be described as:

Ej,k: the energy of coefficient;

Sj,k: the kth coefficient in the jth level of the wavelet decomposition;

N: the number of discrete sampling;

The following statistical features were used to represent the time-frequency distribution of the sputum signals:

1. Divide the signal in a cycle x(n) into inspiration x1(n) and expiration x2(n);

2. After 7 levels of wavelet decomposition of x1(n) and x2(n), the 14 detail coefficients are obtained;

3. Normalize the 14 energy of the detail coefficients obtained by (6);

For the simulation of biological neurons, ANNs have the ability of self-adaptation and self-organization [17]. The knowledge distributed in neurons and connection weights of links between neurons can contribute to solve the problem in ANN. For the sake of generating the desired mapping, the neural network has to be trained to adjust the connection weights and biases. At the training stage, the feature vectors are utilized as input to the network. Meantime, the network tunes the variable parameter, including the weights and biases, in order to acquire the relationship between the input patterns and outputs. ANNs are especially useful for complex pattern recognition and classification tasks. Based on the capability of learning from training samples, ANNs equip with the ability to approach arbitrary nonlinear functions of input. ANNs, with the highly parallel and regular structure, are suitable for pattern identification and classification tasks.

ANNs are generally applied in the biomedical field for modeling, data analysis, and diagnostic classification. BP algorithm, which is used in this study, is the most frequently used training algorithm in classification problems. However, the traditional BP algorithm has gradient descent, and gradient descent with momentum are slow. Therefore, a few of the modified BP algorithms were attempted to train the ANN, such as adaptive learning rate BP, resilient BP, Levenberg-Marquardt, and scaled conjugate gradient BP algorithms.

Cross validation was used to verify the reliability of the outcome of the classifier. For each validation scheme, the training sound samples were used to get the ANN classifier which would then be used to discriminate the test sound samples. In the cross-validation scheme, the dataset was divided randomly into 6 sets of size n/6, where n is the total number of data points. The training was conducted using five sets, and the remaining set was used for testing. The total number of 595 samples were partitioned into 6 disjoint subsets and each time 496 samples were used for training and the remaining 99 for validation. This process was repeated 6 times, and the average classification accuracy is reported for each ANN architecture.

The performance outcome of various ANN architecture classifiers for normalized features are reported in Tables 2. As shown in Table 2, it can be seen that three layers work better than four layers. The highest accuracy can reach 84.36% and the BP neural network classifier with the 14 middle processing layer nodes (i.e., 14-18-2) gives the maximum classification accuracy.

Performance of various ANN architectures with 3 layers and 4 layers

the results of classification with different classifier

However, few efforts have been mentioned in the literature about the analysis and classification of sputum sounds although many literatures have provided new understanding about the analysis, feature extraction and classification of other biological sound signals such as lung sounds and heart sounds [9-12]. Here, we propose a digital based method to automatically detect sputum condition.

Automation is under fast development for medicine [23-26]. The method of neural classification of sputum sounds using wavelet coefficients may help physicians to automatically recognize the sputum deposition of patients with mechanical ventilation in ICU and serve as an aid for nurses to clear the sputum on time. The method will be useful in clinic to improve the secretion clearance technology level, save the lives of ventilated patients, reduce patients' pain and the work intensity of medical staffs. The method may set a foundation for automatic recognition technology applications in clinical treatment.

This work was supported by the Start-up Research Grant (SRG2016-00083-FHS) at University of Macau, the National Natural Science Foundation of China (Grant No. 51575020) and open foundation of the State Key Laboratory of Fluid Power and Mechatronic Systems.

1. Tehrani FT. A control system for mechanical ventilation of passive and active subjects. Computer methods and programs in biomedicine. 2013;110:511-8

14. Abbas A. Statistical signal processing technique for identification of different infected sites of the diseased lungs. Journal of medical systems. 2012;36:1537-41

18. Bianchini M, Scarselli F. On the complexity of neural network classifiers: a comparison between shallow and deep architectures. IEEE transactions on neural networks and learning systems. 2014;25:1553-65