Atherosclerosis is a chronic inflammatory disease associated with the lipid deposition and plaque fibrosis in the arterial wall, and characterized by marked dysfunction in lipid homeostasis and signaling pathways that control the inflammatory response [1, 2].

Stem cells, including endothelial progenitor cells (EPCs), smooth muscle progenitor cells (SMPCs), mesenchymal stem cells (MSCs), different sources of hematopoietic stem cells (HSCs), and adipose-derived stem cells (ADSCs), etc., are cells with self-renewal and differentiation potential. They have been shown to play crucial roles in pathogenesis of atherosclerosis [3]. Undifferentiated HSCs migrate from the bloodstream into diseased tissue and differentiate to macrophages, monocytes, and neutrophils in response to infection and inflammation [4, 5]. Accumulated studies have shown that HSCs are also released into the bloodstream after acute myocardial infarction and augment formation of new monocytes that participate in the progression of atherosclerosis [5]. This indicates that circulating HSCs in the bloodstream represent a pool of undifferentiated stem cells that play a role in the pathogenesis of atherosclerosis. CD34+ stem cells, one kind of HSCs, are localized in atherosclerotic aorta as well as in aortic atherosclerotic regression, and thus could be of great clinical relevance [6]. Medbury et al. examined human endarterectomy specimens and found that the fibrous cap of the plaque contained either smooth muscle cells or CD34+ stem cells [7].

The signaling system plays a fundamental part in cells, as it essentially regulates cells and organisms under physiological and pathological states [8]. A malfunction in this system can disrupt the fine-balanced signal transduction significantly, and is believed to be involved in diseases [9]. Inflammatory pathways in stem cells are under stringent control by a variety of transcription factors and coregulatory molecules, such as NF-κB, AP1, the PPAR family, liver X receptor alpha (LXRα/Nr1h3), and their associated coactivators and corepressors [10]. However, the signaling pathways that regulate inflammation and cytokine production in stem cells for atherosclerosis remain incompletely understood. Perturbation of human signaling networks by mutations or abnormal protein expressions underlies the cause of many diseases [11]. It was suggested that diseases could be studied more effectively using systems biology approaches from the perspective of networks [12]. With the increased scope of systems biology, network modules could provide the elucidation of disease mechanisms and provide better strategies for developing multi-marker-module-based risk predictions [13].

Here, we proposed an integrated approach to elucidate systematically the pathogenesis of atherosclerosis by identifying Atherosclerosis-risk Modules based on a human signaling network and disease related gene expression data of stem cells from a systems biology point of view (Figure 1). Our approach would bring a novel understanding of disease signal transduction, and provide valuable insights to the identification of potential biomarkers and the pathogenesis of atherosclerosis.

Two weighted signaling networks were generated by giving weights to edges of the human signaling network. The weight of the i-th edge Ei connecting two genes a and b was calculated as Pearson Correlation Coefficient of expression values of a and b in normal and atherosclerosis statuses, respectively.

where aj and bj are gene expression values of genes a and b of sample j,

are average expression values for the genes of all samples in each status, and n is the number of samples in corresponding statuses.

First, network modules of two weighted signaling networks were mined using the online tool ClusterONE (http://www.paccanarolab.org.sci-hub.org/clusterone/), respectively. ClusterONE is a graph-clustering algorithm to identify functional modules in the network. Each module was consisted of a set of genes that were both topologically close and had highly correlated interactions. Modules contained at least four genes were selected.

Next, 4 permutation tests were performed for each network module.

Given a network module M from weighted human signaling networks with h edges E1, Λ, Eh, the expression differential score V was evaluated by differences between Pearson correlation coefficients and those between average expression values, respectively, as follows:

For normal and atherosclerosis samples, X, Y and X', Y' are gene expression values, Sk and S'k are Pearson correlation coefficients of the k-th edge , Su and S'u are the average expression value of genes in M, respectively. g is the number of genes in the module. For each network module, the differential score V was calculated.

Functions “GO:0006954~inflammatory response”, “GO:0006955~immune response”, “GO:0002684~positive regulation of immune system process” and “58.(CD40L)_immnosurveillance” were associated with the immune system and inflammatory. Atherosclerosis is an inflammatory disease with lesions filling with immune cells that can orchestrate and affect inflammatory responses. Unstable plaques were particularly rich in activated immune cells, suggesting that they might initiate plaque activation [19]. “GO:0005125~cytokine activity” is related to the cytokines. Many cytokines are expressed in atherosclerotic plaques and all cells involved in the disease are capable of producing cytokines and responding to them. Cytokines could modulate endothelial cells (EC) permeability. Activated ECs release a range of chemokines and other cytokines that then cause the recruitment of circulating immune cells, particularly monocytes and T lymphocytes [20, 21]. In addition, the ECs express adhesion proteins, such as intercellular adhesion molecule-1 (ICAM1) and vascular cell adhesion molecule-1 (VCAM1), which participate in the recruitment of immune cells [22, 23]. 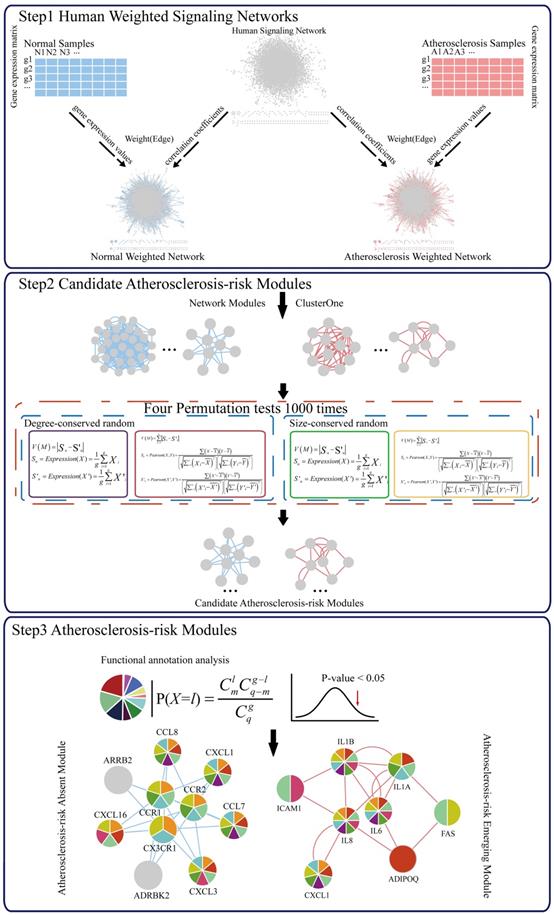 Analysis of genes in Atherosclerosis-risk Modules

Atherosclerosis-risk Absent Module C368 was identified only from the normal weighted signaling network rather than the atherosclerosis weighted signaling network. Most genes in this module were members of chemokines. These chemokines were considered to be pro-inflammatory and could be induced during an immune response to recruit cells of the immune system to a site of infection [30]. Meanwhile, chemokines were also considered to be homeostatic and involved in controlling the migration of cells during normal processes of tissue maintenance or development and could promote wound healing [31, 32]. For instance, CCR1 was confirmed to play a protective role on atherosclerosis [29]. CX3CR1 is the only member of CX3C - chemokines Fractalkine (FKN) receptor [33]. Resent research has shown that FKN / CX3CR1 was involved in the inflammatory process and played a pro-inflammatory effect of atherosclerosis [2, 33]. Hence, absence of Atherosclerosis-risk Module C368 in disease status suggested that the protective effect of Module C368 were suppressed, which promoted the occurrence of atherosclerosis.

Interestingly, CXCL1 was in both Atherosclerosis-risk Absent Module C368 and Emerging Module P96. CXCL1 is an antimicrobial gene encodes a member of the CXC subfamily of chemokines. This protein played a role in inflammation as a chemoattractant for neutrophils and could increase chemotactic activity [34]. The appropriate expression of CXCL1 would inhibit the formation of plaques [34, 35]. Expression difference of CXCL1 in two modules demonstrated the function changes in the process of atherosclerosis.

Moreover, Atherosclerosis-risk Emerging Module P96 could be identified only in atherosclerosis weighted signaling network, and genes in this module were mainly related to inflammatory response and chemotaxis. For instance, IL1A and IL1B belonged to interleukin family, which attracted neutrophils, and caused the release of inflammatory mediators. IL1B was involved in the pathogenesis of atherosclerosis for endothelial cells. Secreted IL1A, IL1B amplified and differentiated progenitor cells (CD34 (+)) cells via c-MSCs signal [22, 36-38]. IL6 could lead to the accumulation of inflammatory cells in atherosclerotic plaques, affect the stability of plaque and promote thrombosis and necrosis [39, 40]. IL8 is the main attractor and activator of neutrophils. IL8 also had a role in promoting artery atherosclerotic plaque pathological angiogenesis, which was one of the main factors that lead to plaque instability [22, 41]. Hence, the emergence of Atherosclerosis-risk Module P96 in disease status may facilitate the development of atherosclerosis.

Atherosclerosis is a disease of the arteries characterized by the deposition of plaques of fatty material on their inner walls. Compelling evidence has demonstrated how risk factors, such as hypercholesterolemia, provoked inflammation and reinforced the initiation and progression of atherosclerosis [42]. Interestingly, recent studies have reported that hypercholesterolemia had an impact on stem cells to strengthen inflammation [42, 43]. Studies have shown that atherosclerotic plaques were closely associated with ectopic calcification of vascular differentiation of stem cells [44]. Moreover, perturbation of the signals stem cells secreted by mutations or abnormal protein expression underlies a cause of atherosclerosis [45, 46]. Here, we put forward an integrated approach to identify Atherosclerosis-risk Modules using atherosclerosis related stem cell expression profiles based on a human signaling network. Five Atherosclerosis-risk Modules (three Absent Modules and two Emerging Modules) were identified from two weighted human signaling networks, which were both significantly differential between normal and disease statuses and enriched in functions significantly associated with atherosclerosis genes.

Atherosclerosis-risk Absent Modules were only identified from the normal weighted signaling network, which were crucial to maintain the normal cell regulation and transport function. Absence of these modules in disease status would lead to the disorder of the signal of stem cells and the change of the internal environment so as to participate in the pathogenesis of atherosclerosis [24-27, 47, 48]. The 3 Atherosclerosis-risk Absent Modules enriched significantly in the functional categories related to the maintenance of normal biological process, including “GO:0031328~positive regulation of cellular biosynthetic process”, “GO:0051173~positive regulation of nitrogen compound metabolic process” and “GO:0006935~chemotaxis”. Cellular biosynthetic process is involved in many biological processes. DeBerardinis et al. have demonstrated that the disorder of cellular biosynthetic process could lead to related signal disorders and the development of diseases [49]. Qiao et al. have proved that metabolic disorders amplified macrophage chemotactic responses and accelerated the atherogenesis process [50]. The production of reactive nitrogen species was implicated in atherosclerosis principally as means of damaging low-density lipoprotein that in turn initiated the accumulation of cholesterol [51]. Meanwhile, the average expression value of Atherosclerosis-risk Absent Modules in disease status was lower than that in normal status significantly, which suggested that the absence of Atherosclerosis-risk Absent Modules might involve in the pathogenesis of atherosclerosis.

41. Papadopoulou C, Corrigall V, Taylor PR. et al. The role of the chemokines MCP-1, GRO-alpha, IL-8 and their receptors in the adhesion of monocytic cells to human atherosclerotic plaques. Cytokine. 2008;43:181-6