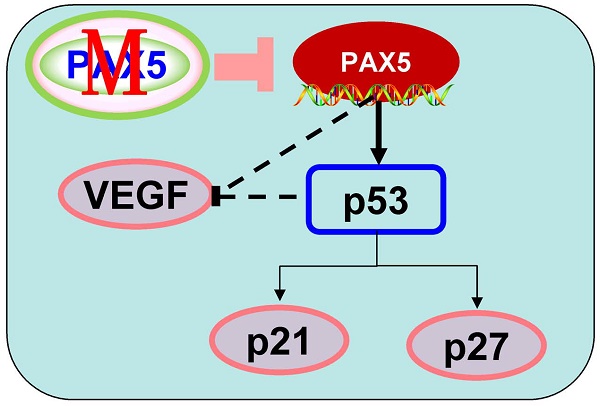 The Paired box 5 (PAX5) gene, located on chromosome 9p13, belongs to a family of nuclear transcription factors termed the paired box genes, which consists of nine members [6]. PAX5 plays an important role as an activator during B lymphoid cell commitment. It is also known to be a commonly altered gene and target of genetic lesions in B-Cell Precursor Acute Lymphoblastic Leukemia (BCP-ALL) [6-8]. Previous studies have reported that the deletion of PAX5 in hepatocellular carcinoma [9], gastric carcinoma [10] and lung cancer [11] is associated with DNA promoter hypermethylation. Frequent aberrant methylation of PAX5 has also been reported in both female and male breast cancers [12-14]. PAX5 has also been identified as an inhibitor of epithelial-to-mesenchymal transition (EMT) progression in breast cancer cells [15, 16]. Recently, Branham et al. reported that the methylation state of PAX5 is a strong predictor of BRCAness tumors [17]. However, the relationship between PAX5 methylation and breast cancer, particularly the correlation between PAX5 methylation and the clinical parameters of breast cancer have yet to be determined. In this study, we find that promoter methylation can silence or reduce PAX5 expression in multiple breast cancer cell lines and primary tumors. Further functional studies demonstrated that the ectopic expression of PAX5 leads to tumor suppression via the inhibition of proliferation and invasion, a result of alterations in the cell cycle pathway and the expression of vascular endothelial growth factor (VEGF). These results suggest that PAX5 is a potential tumor suppressor in breast cancer. Most importantly, we find that PAX5 methylation status in breast cancer tissue is significantly correlated with age, estrogen receptor (ER) status, progesterone receptor (PR) status and breast cancer molecular subtype, indicating that PAX5 could be used as a biomarker in breast cancer diagnosis and treatment strategy design.

Bisulfite treatment and methylation-specific PCR (MSP) were performed as described previously [11]. Bisulfite-treated DNA was amplified in order to evaluate the methylation status of PAX5 by MSP with primers PAX5-m1 and PAX5-m2 to detect methylated DNA, and PAX5-u1 and PAX5-u2 to detect unmethylated DNA. The methylation- specific primers used were as follows: m1: AAATAAAAATTCGGTTT GCGTTC, m2: AAACATACGCTTAAAAATCGCG. The unmethylation -specific primers used were as follows u1: TAAAAATAAAAATTTG GTTTGTGTTT, u2: TTAAAACATACACTTAAAAATCACA.

MDA-MB-231 and BT549 cell lines were cultured as previously described. Tumor cells were seeded in 6-well plates at a density of 1x105 cells per well. Lipofectamine-2000 (Invitrogen) was used to transfect NEG and PAX5 plasmids. G418 was used to select for PAX5 stably expressing cells 48 hrs post-transfection.

MDA-MB-231 and BT549 cells were transfected as previously described. Transfection was stopped after 48 hrs and cells were digested using 0.1% trypsin. Cells were centrifuged at 4°C at 1000 rpm for 5 mins. The pellets were fixed in ice-cold 70% ethanol and stained with propidium iodide. Data were analyzed using the CELL Quest kit (BD Biosciences, San Jose, CA, USA).

Stably transfected cells were seeded in 6-well plates at a density of 200, 400 or 800 cells per well. The resulting colonies were fixed in 4% Paraformaldehyde, stained with crystal violet solution and counted under the microscope after 14 days.

BT549 stably transfected cells were seeded in a 6-well plate. Once confluent, the cell layer was wounded, washed with PBS, then re-cultured in fresh complete media. Images were acquired following an additional 36 hrs of incubation.

Cell culture well inserts were set in 24-well plates and coated with basement matrigel (BD Biosciences). Stably transfected cells were starved for 24 hrs and plated on inserts with 600 μl serum-free media. The bottom of the well was filled with 800 μl fresh complete media. After 24 hrs, the cells that passed through the membrane were fixed in 4% Paraformaldehyde, stained with crystal violet solution and detected on an Axiovert 40 CFL microscope.

Stably transfected MDA-MB-231 cells and control cells (5×106 cells in 0.2 ml PBS) were hypodermically injected into the thigh flanks of female nude mice (aged 6 weeks old, six mice per group). Mice were weighed every 4 days from the 10th day post-injection onwards for 16 days. Mice were sacrificed on day 26 post-injection, and the weight of tumors was measured. The protocols for in vivo animal experimentation were approved by the Committee on the Ethical Use of Animals of the First Affiliated Hospital of Chongqing Medical University.

Tumor tissue obtained from mice was embedded in paraffin. Antigen retrieval was performed by heating sections in Tris-EDTA buffer (pH=9) for 20 min in a microwave oven. Endogenous peroxidase activity was inhibited by incubating sections in 3% H2O2 for 15 min. Non-specific binding sites were blocked for 30 min. Tissue sections were incubated with primary antibodies (PAX5, Ki67, VEGF) overnight at 4°C. Sections were then incubated with secondary antibodies in PBST for 30 min at room temperature. Slides were developed for 5 min with 3-3'-diaminobenzidine (DAB) chromogen and counterstained with hematoxylin. Images were obtained on microscope.

Statistical analyses were performed with SPSS version 17.0 (SPSS Inc., Chicago, IL). A student's t-test was used to analyze the differences in PAX5 expression between breast cancer tissues and surgical margin tissues, and the differences in biological behaviors of PAX5-expressing cells vs. controls. A chi-squared (χ2) or Fisher's exact test was used to determine the correlation between PAX5 methylation status and a given clinical parameter. For all statistical tests, p <0.05 was the cut-off for statistical significance. 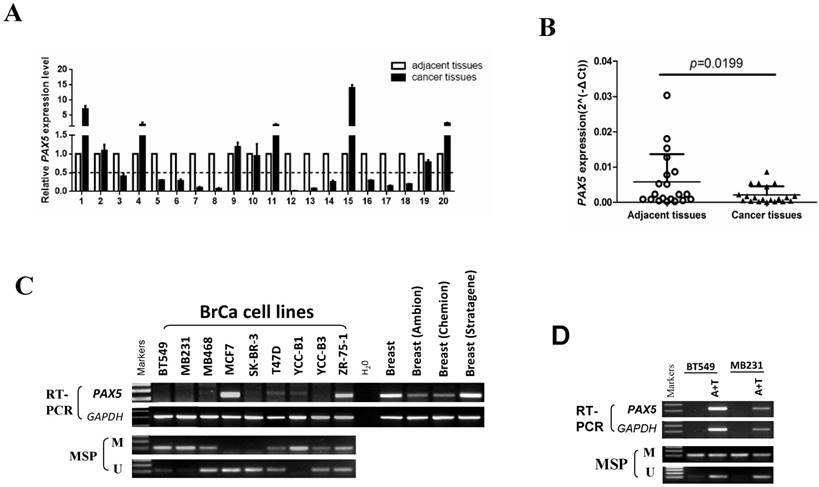 By using the GEPIA online software, we analyzed breast cancer database in TGCA and we found that patients with low expression of PAX5 have less DFS than the patients who have high PAX5 expression (p< 0.05) (Supplementary Fig 1), meaning that PAX5 is a potential biomarker for breast cancer outcome. 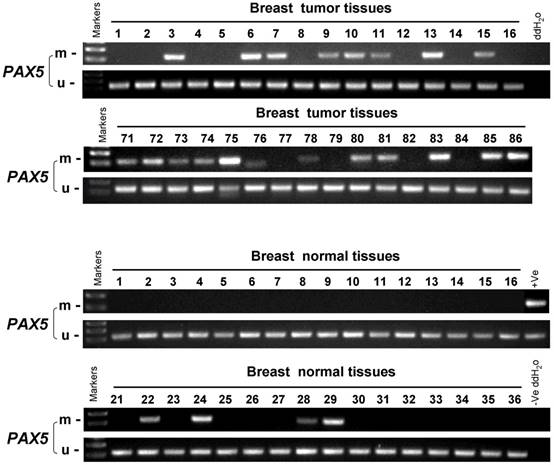 Our observation of PAX5 silencing by hypermethylation in breast cancer cells indicated that it may act as a tumor suppressor. We, therefore, examined the influence of PAX5 on tumor cell proliferation by restoring PAX5 expression in two PAX5 silenced cell lines (MDA-MB-231 and BT549). We validated the re-expression of PAX5 in transiently transfected cell lines by RT-PCR and western-blot (Fig. 3A). A CCK-8 assay revealed that ectopic PAX5 expression led to decreased cell viability at 48 hr and 72 hr time points compared to control vectors in both cell lines (p<0.01) (Fig. 3B). Additionally, a colony formation assay revealed that colony numbers were markedly reduced to 49% in MDA-MB-231 cells (p<0.01) and 15% in BT549 (p<0.01), relative to control cells (Fig. 3C). The inhibitory effect of PAX5 on tumor cell proliferation was further demonstrated by a soft agar colony formation assay in MDA-MB-231 cells. The number of resultant colonies (≥50 μm in size) from transient transfected cells was significantly decreased to 15% (p<0.01) relative to control transfected cells (Fig. 3D). 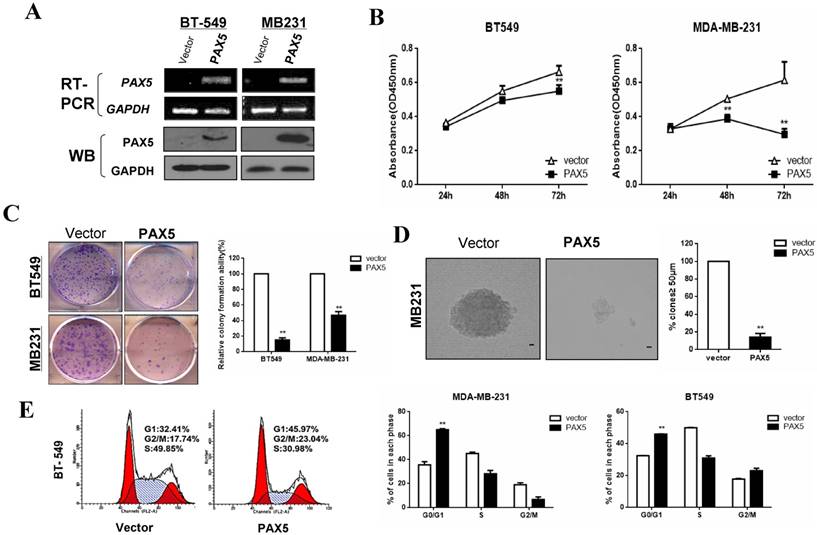 Methylation status of the PAX5 promoter in primary breast tumors 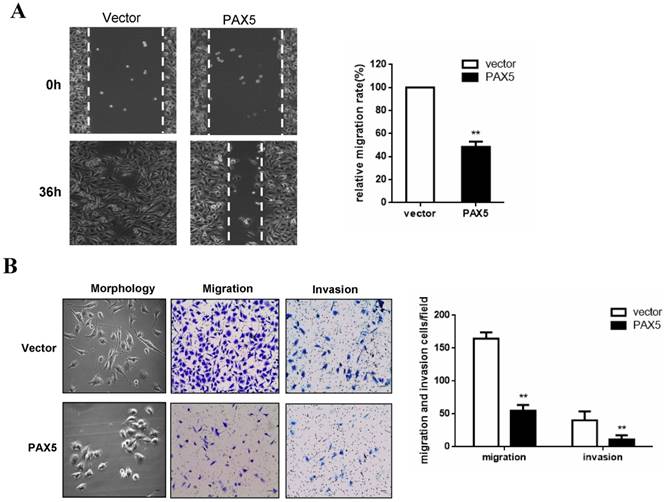 PAX5 is involved in cell cycle regulation and VEGF expression

We report here that PAX5 is diffusely expressed in normal breast and paracarcinoma tissues, while frequently deleted or reduced in breast cancer cell lines and primary breast cancer tissues. This indicates that PAX5 may play an important role in suppressing breast cancer tumorigenesis. We further observed that the deletion or reduction of PAX5 might be due to aberrant promoter hypermethylation, which was confirmed by methylation specific PCR, and validated with a demethylation treatment assay. However, one breast cancer cell line, SK-BR-3, displayed unmethylated PAX5 along with an absence of detectable PAX5 expression, suggesting that other mechanisms may also contribute to the downregulation of PAX5 in breast cancer. The loss of PAX5 transcriptional activation has been reported in B-Cell Acute Lymphoblastic Leukemia (B-ALL), and was found to be due to either the loss of the PAX5 paired domain or frameshift mutations [19].

PAX5 inhibit breast cancer growth in mouse model. (A) Nude mice are injected with PAX5 transfected MB231cells and controls. (B) (C) Mice are sacrificed after 26 days and the weight of the tumors are measured. PAX5 induces a decrease in the growth of the tumors and the weight of tumors, compared with controls (**, p < 0.01). (D) The expression of PAX5, Ki67 and VEGF in tumors are confirmed by immunochemistry (**, p < 0.01). 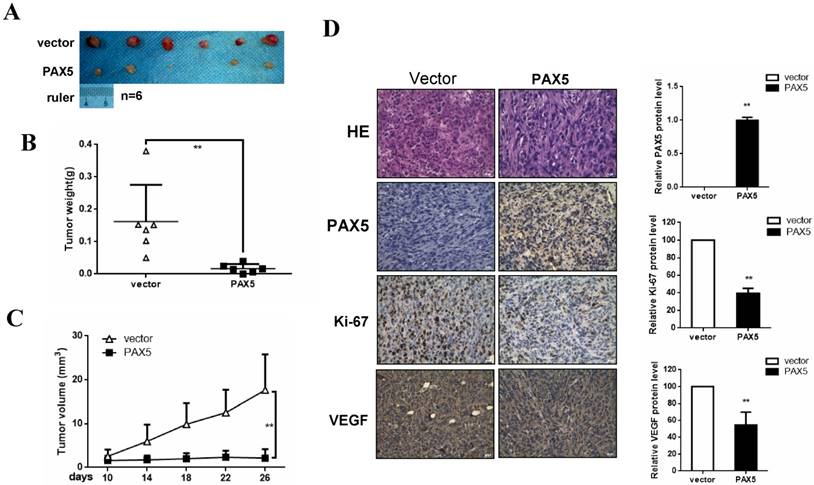 The tumor suppressor p53 is a key regulator of tumor growth, where it exerts its effects by modulating the cell cycle. Swaminathan et al. reported that BACH2 mediates PAX5-dependent tumor suppression in pre-B ALL through the activation of p53 [21]. In the present study, we found that PAX5 in two breast cancer cell lines (MDA-MB-231 and BT-549) is able to promote G1/G0 arrest. Correspondingly, PAX5 is able to increase the expression of p53, p21 and p27. The cell cycle inhibitor p21 has been reported to play a key role in the p53-dependent anti-cancer pathway [22], and is also a mediator of cell cycle arrest by inhibiting the activity of cyclin-dependent kinase (CDK)-cyclin complexes [23]. Additionally, p27, which belongs to the kinase inhibitor protein (KIP) family (whose members include p21CIP1, p27Kip1 and p57Kip2), induces G1 phase arrest by attenuating cyclin E/CDK2 and cyclin A/CDK2 activity [24]. p53 is also independently capable of inhibiting cyclin D1 promoter activity [25]. As key regulators of the transition from the G0/G1 phase to the synthesis (S) phase, cyclinD1 and CDK4 have already been used as targets in breast cancer treatment [26]. In our study, we found that PAX5 is able to decrease the expression of both cyclinD1 and CDK4.