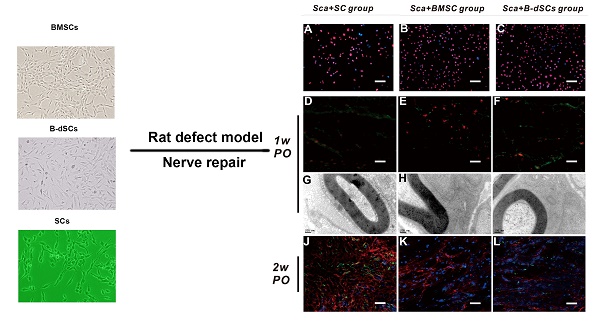 Schwann cells (SCs) are primarily responsible for the formation of myelin sheaths, yet bone marrow mesenchymal stem cell (BMSC)-derived SCs are often used to replace autologous SCs and assist with the repair of peripheral nerve myelin sheaths. In this study, the effects of the two cell types on remyelination were compared during the repair of peripheral nerves. Methods: An acellular nerve scaffold was prepared using the extraction technique. Rat BMSCs and autologous SCs were extracted. BMSCs were induced to differentiate into BMSC-derived SCs (B-dSCs) in vitro. Seed cells (BMSCs, B-dSCs, and autologous SCs) were cocultured with nerve scaffolds (Sca) in vitro. Rats with severed sciatic nerves were used as the animal model. A composite scaffold was used to bridge the broken ends. After surgery, electrophysiology, cell tracking analyses (EdU labeling), immunofluorescence staining (myelin basic protein (MBP)), toluidine blue staining, and transmission electron microscopy were conducted to compare remyelination between the various groups and to evaluate the effects of the seed cells on myelination. One week after transplantation, only a small number of B-dSCs expressed MBP, which was far less than the proportion of MBP-expressing autologous SCs (P<0.01) but was higher than the proportion of BMSCs expressing MBP (P<0.05). Four weeks after surgery, the electrophysiology results (latency time, conductive velocity and amplitude) and various quantitative indicators of remyelination (thickness, distribution, and the number of myelinated fibers) showed that the Sca+B-dSC group was inferior to the Sca+autologous SC group (P<0.05) but was superior to the Sca+BMSC group (P<0.05). Conclusions: Within 4 weeks after surgery, the use of an acellular nerve scaffold combined with B-dSCs promotes remyelination to a certain extent, but the effect is significantly less than that of the scaffold combined with autologous SCs.