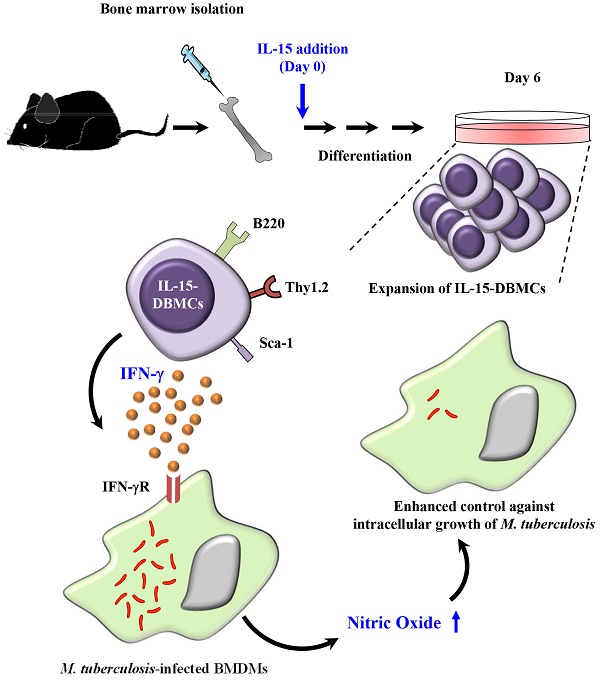 Recently, interest in IL-15-differentiated cells has increased; however, the phenotypic definition of IL-15-differentiated bone marrow-derived cells (IL-15-DBMCs) is still under debate, particularly the generation of IFN-γ-producing innate cells such as premature NK (pre-mNK) cells, natural killer dendritic cells (NKDCs), interferon-producing killer dendritic cells (IKDCs), and type 1 innate lymphoid cells (ILC1s), all of which are IL-15-dependent. Here, we revisited the immunophenotypic characteristics of IFN-γ-producing IL-15-DBMCs and their functional role in the control of intracellular Mycobacterium tuberculosis (Mtb) infection. When comparing the cytokine levels between bone marrow-derived dendritic cells (BMDCs) and IL-15-DBMCs upon stimulation with various TLR agonists, only the CD11cint population of IL-15-DBMCs produced significant levels of IFN-γ, decreased levels of MHC-II, and increased levels of B220. Neither BMDCs nor IL-15-DBMCs were found to express DX5 or NK1.1, which are representative markers for the NK cell lineage and IKDCs. When the CD11cintB220+ population of IL-15-DBMCs was enriched, the Thy1.2+Sca-1+ population showed a marked increase in IFN-γ production. In addition, while depletion of the B220+ and Thy1.2+ populations of IL-15-DBMCs, but not the CD19+ population, inhibited IFN-γ production, enrichment of these cell populations increased IFN-γ. Ultimately, co-culture of sorted IFN-γ-producing B220+Thy1.2+ IL-15-DBMCs with Mtb-infected macrophages resulted in control of the intracellular growth of Mtb via the IFN-γ-nitric oxide axis in a donor cell number-dependent manner. Taken together, the results indicate that IFN-γ-producing IL-15-DBMCs could be redefined as CD11cintB220+Thy1.2+Sca-1+ cells, which phenotypically resemble both IKDCs and ILC1s, and may have therapeutic potential for controlling infectious intracellular bacteria such as Mtb.