Holliday Junction Recognition Protein (HJURP) is involved in various cancers including hepatocellular carcinoma (HCC). Current studies have showed that HJURP is correlated with HCC proliferation. However, the role of HJURP in HCC Epithelial-to-Mesenchymal Transition remains unclear. In this study, we found that HJURP knockdown significantly reduced the migration and invasion abilities of HCC cells both in vivo and in vitro by interacting with Sphingosine kinase1 (SPHK1). Conversely, HJURP overexpression enhanced these biological abilities. Moreover, high HJURP expression is related to poor prognosis of HCC patients. In conclusion, HJURP plays an important role in tumor metastasis by upregulating SPHK1. And high HJURP expression may predict a lower disease-free survival rate and higher possibility of microvascular invasion in HCC patients.

Hepatocellular carcinoma (HCC) is one of the most common malignancies worldwide[1]. According to some epidemiologic studies, around 780,000 new patients were diagnosed worldwide in 2012 and nearly 750,000 cases of HCC-related death were reported, which makes it the third leading cause of cancer-related death in the world[2]. With the development of medical technology, early diagnosis and advanced therapeutic approaches have improved survival rates of HCC individuals[3]. However, due to lack of early symptoms, HCC is usually diagnosed at advanced stage and its therapeutic options are limited, in which cases, patients generally die within a few years of diagnosis. Thus, it is essential to illuminate the molecular mechanisms underlying tumorigenesis and metastasis in HCC and find novel therapeutic targets for HCC patients[4].

Holliday Junction Recognition Protein (HJURP) is identified as a sort of centromeric protein that plays a pivotal role in the assembly and maintenance of histone H3-like variant CENP-A[5], and it helps the recruitment of CENP-C and mediates chromosome segregation and cell division[6]. It has been reported to have a significantly higher expression in HCC tissues compared to non-tumor tissues[7, 8]. Overexpression of HJURP accelerates HCC proliferation in vitro and it leads to an unfavorable clinical outcome in hepatocellular carcinoma[7]. In addition, Huang et. al. indicated that SNP of HJURP, rs3771333 plays an important role in mediating the susceptibility to HCC in Chinese population[9]. However, there are no studies illuminating the mechanism of HJURP in tumor metastasis.

Epithelial-to-Mesenchymal Transition (EMT), known as the ability of epithelial cells to transdifferentiation into mesenchymal cells, plays an important role in embryonic development, tissue repair, organ fibrosis and cancer progression[10-12]. During the progress of EMT, epithelial cells reorganize their cortical actin cytoskeleton, undergo a change in cell shape, decrease cell-cell adhesion and increase the motility of individual cells, which enables the development of an invasive phenotype[13]. Generally, EMT is mediated by key factors, including SNAIL, zinc-finger E-box-binding (ZEB), lymphoid enhancer binding factor-1 (LEF-1) and basic helix-loop-helix transcription factors[14, 15]. Besides, Sphingosine kinase1 (SPHK1) can transform sphingosine to sphingosine 1-phosphate, which has been reported to play an important role in regulating EMT in human neoplasms[16]. Xu et.al. showed that SPHK1 modulates the expression of EMT-related markers and cell migration by regulating the expression of p-FAK in colorectal cancer cells[17]. Liu et. al. demonstrated that SPHK1 induces EMT by facilitating E-cadherin lysosomal degradation in HCC cells[18]. Although SPHK1 has been demonstrated to be important in EMT, the role of SPHK1 in HJURP- induced EMT remains to be clarified.

Herein, we investigated the role of HJURP involved in HCC metastasis and analyzed the relation between HJURP expression and clinicopathological features.

Total RNA was extracted from HCC cell lines or tissue samples using Trizol Reagent (Life, USA) according to the manufacturer′s instruction. To analysis the expression of mRNA, total RNA was reverse transcribed to cDNA using Prime Script RT master mix (Takara, Japan), after which Quantitative Real Time-PCR (RT-qPCR) was performed with SYBR Premix Ex Taq (Takara, Japan). It was calculated by using the 2-ΔCT method and GAPDH was taken as the endogenous control. The relative expression of HJURP between HCC cell lines was calculated using the 2-ΔΔCT method. The sequences of primers used were listed in Table 1.

The sequences of primers.

For immunofluorescence assay, 5×104 stable transfected tumor cells were seeded in 2 mm confocal plate (Nunc, USA) for culture in indicated incubator. Cultured cells were fixed with 4% paraformaldehyde and then permeabilized by 0.25% TritonX-100. After blocking with 1% bovine serum albumin (BSA), primary antibodies against E-cadherin (1:50) and Vimentin (1:100) (Cell Signaling Technology, USA) were added into each plate for an overnight incubation at 4°C. A secondary antibody (1:200, Sigma-Aldrich, USA) was incubated at 37°C for 30 min and DAPI was used to stain the nuclei at room temperature for 15 min. The images were captured by a fluorescence microscope (Olympus BX53, Japan).

To establish in vivo metastasis assays,1×106 tumor cells per mouse were suspended in 50 μl PBS and injected via tail vein. After 10 weeks, liver and lung were harvested for H&E staining and calculation of metastasis lesions.

The expression of HJURP in HCC cell lines and tissues

For the role of HJURP in HCC, we examined the expression of HJURP in HCC cell lines and clinical tissues. Data from Oncomine database revealed that mRNA of HJURP increased in HCC tissues (Figure 1A). Western-blot showed that HJURP remarkably overexpressed in five HCC cell lines compared to an immortalized hepatic cell line (L02) (Figure 1B). In addition, immunohistochemistry (IHC) staining and western-blot revealed that HJURP was significantly higher in HCC tissues than that in adjacent normal tissues (Figure 1C, 1F). Then, HCC-LM3 and Huh7 were used to construct HJURP stable transfected HCC cell lines. And the efficiency of HJURP-silenced and HJURP-overexpressed HCC cell lines were confirmed by western-blot (Figure 1D).

For more biological functions of HJURP, transwell assay was used to validate the migration and invasion capabilities of HCC cells. HJURP knockdown dramatically suppressed Huh7 and HCC-LM3 cells invasion and migration. Inversely, overexpression of HJURP in Huh7 and HCC-LM3 cells promoted its invasion and migration (Figure 2A and B, Supplementary Figure 1A, 1B). Moreover, we established an in vivo tumor metastasis model to study the effect of HJURP on pulmonary metastasis. In consistent with results of in vitro experiments, HJURP down-expression HCC-LM3 cells caused less lung metastasis clusters than its control group (Figure 2C). Subsequently, we studied EMT proteins to understand the mechanism in relation to HJURP mediated aggressive effect. And E-cadherin was significantly upregulated whereas Vimentin were downregulated in HJURP-knockdown HCC-LM3 cells. And the same results were mirrored in HJURP overexpression group (Figure 2D). Immunofluorescence assay revealed that HJURP silence significantly enhanced the expression of E-cadherin and inhibited the expression of vimentin. Besides, HJURP overexpression in Huh7 cells resulted in E-cadherin decrease and vimentin enhancement (Figure 2E).

To further investigate the mechanism of HJURP induced EMT, we performed a microarray analysis in Huh7 cells (Figure 3A). Based on the results of microarray, 85 genes were upregulated and 79 genes were downregulated. In those 164 differential expressed genes, 20 EMT-related genes were tested by RT-qPCR. Dramatically, only Sphingosine Kinase 1 (SPHK1) changed with HJURP knockdown or overexpression (Figure 3B). And the KEGG pathway analysis proved that HJURP regulated sphingosine metabolites process (Figure 3C). According to this result, we wondered whether HJURP induced EMT via SPHK1. To address that hypothesis, we detected the expression of SPHK1 in HJURP knockdown and overexpression cells respectively. Western-blot showed that HJURP silence inhibited the expression of SPHK1. Conversely, HJURP overexpression increased the expression of SPHK1 (Figure 3E). Moreover, SPHK1 overexpression significantly reversed the invasion abilities and EMT markers (E-cadherin, Vimentin and N-cadherin) in HJURP- knockdown Huh7 and HCC-LM3 cells (Figure 4A and B). To further elucidate whether HJURP interacts with SPHK1, Co-IP assay was performed to detect endogenous HJURP and SPHK1 in HCC-LM3 cells. As shown in Figure 3F, HJURP was found to be co-precipitated with SPHK1.

The expression of HJURP is positively correlated with SPHK1

We next determined the correlation between HJURP and SPHK1. Data from The Cancer Genome Atlas (TCGA) database showed that mRNA of SPHK1 was correlated with that of HJURP (Figure 3D). Furthermore, immunohistochemistry of HCC tissues revealed that 72.86% HCC specimens with high HJURP expression were accompanied with high SPHK1 expression. Similarly, 71.43% of samples with low HJURP expression displayed weak staining of SPHK1 (Figure 5A and B). 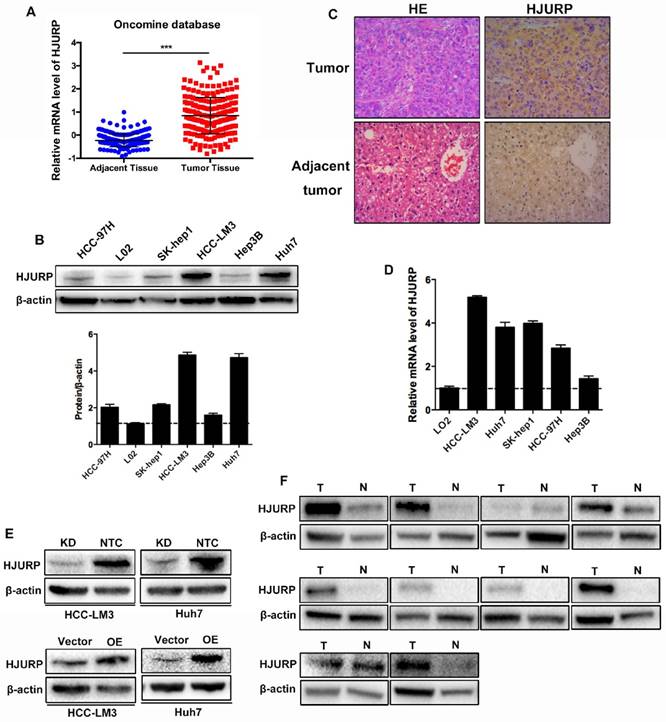 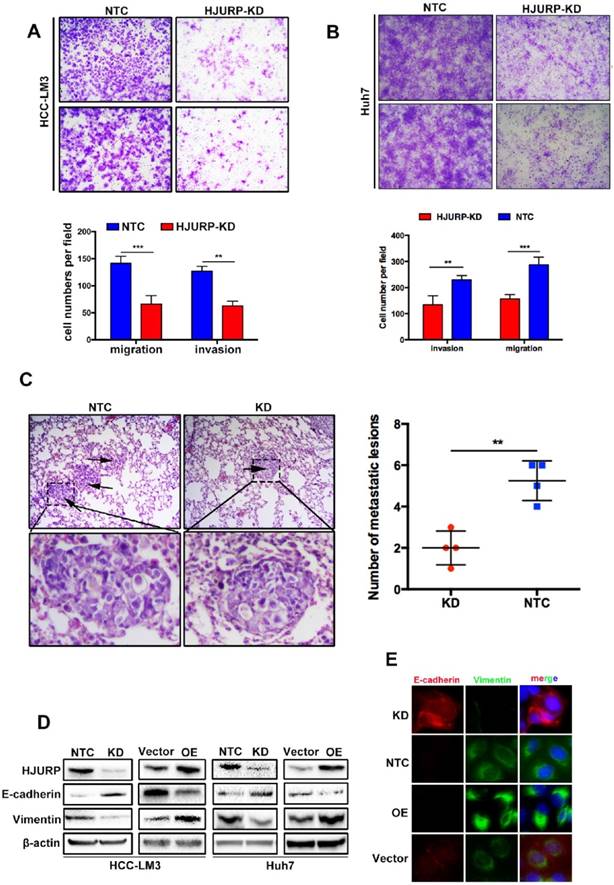 HJURP has been demonstrated to be correlated with different kinds of cancer including HCC. According to current studies, HJURP acts as an oncogene in HCC[7, 8]. Although HJURP has been reported to mediate HCC proliferation, HJURP- induced metastasis has not yet been studied.

HJURP facilitates EMT via upregulating Sphingosine Kinase 1. (A) Microarray analysis of NTC and KD group in Huh7 cells. (B) EMT-related genes were analyzed by RT-qPCR in HCC-LM3 and Huh7 cells. Relative mRNA levels of 20 genes (left) and SPHK1 (right) are shown. (C) KEGG (Kyoto Encyclopedia of Genes and Genomes) pathways enriched in 164 genes whose expression is correlated with HJURP. The sphingolipid metabolic progress is marked with “*”. (D) Scatter plots shows a positive correlation between HJURP and SPHK1 at the mRNA level. Data were from TCGA database. (E) The protein level of HJURP and SPHK1 were detected by western-blot in HCC-LM3 and Huh7 cells. (F) Co-Immunoprecipitation assay shows HJURP interacts with SPHK1 in HCC-LM3 cells. 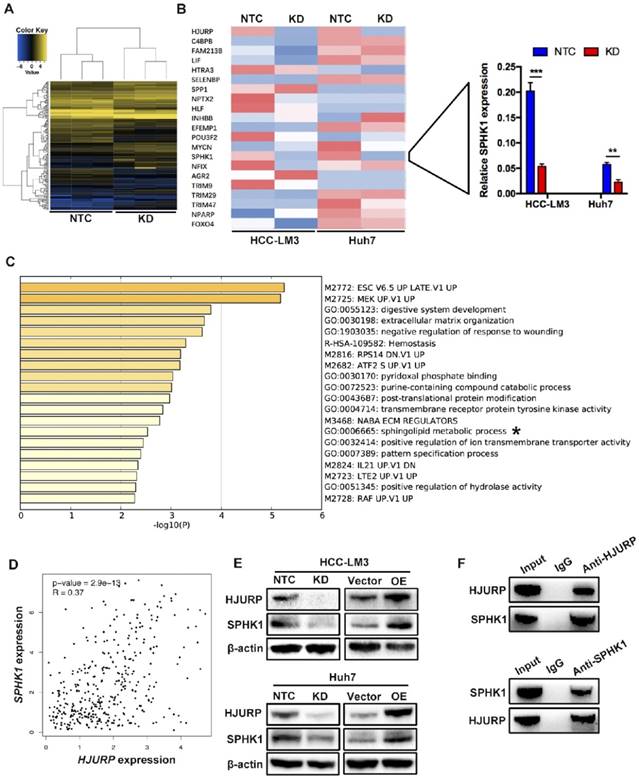 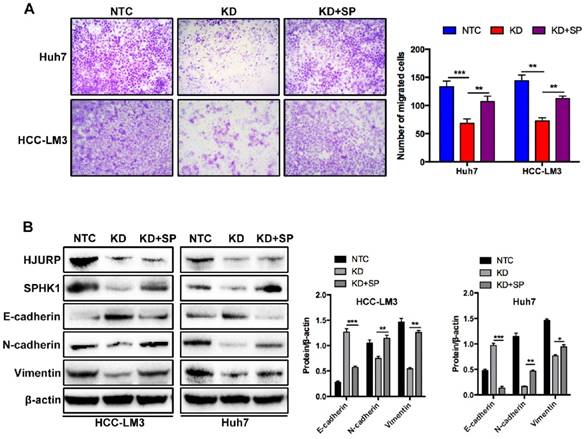 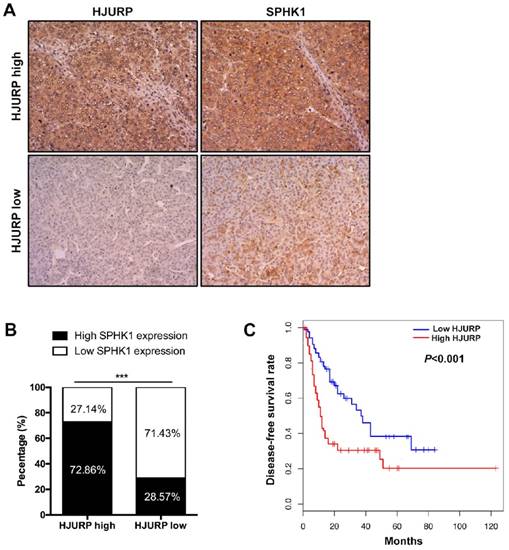 Relation between HJURP expression and clinicopathological features in HCC patients.

The schematic model of HJURP-induced metastasis in HCC.

SPHK1 is a regulator of sphingosine metabolites, which can facilitate the development of human neoplasms including HCC. Zhang and Bao et.al. reported that SPHK1 overexpression facilitates the migration and invasion in SMMC-7721 cells[23, 24]. We found that the expression of SPHK1 is positively correlated with HJURP both in HCC cells and tissues. And the KEGG analysis revealed HJURP could mediate the sphingolipid metabolite process, so we conjectured that HJURP promotes EMT via SPHK1. Besides, SPHK1 overexpression in HJURP-knockdown cells reversed the invasion abilities and the expression of EMT markers in HCC-LM3 and Huh7 cells. Given that HJURP facilitates EMT by interacting with SPHK1 (as shown in Co-IP assay), the underlying mechanism involved in SPHK1 mediated EMT in HCC remains interesting. Although we did not research it in this work, it has been clarified in Liu′s research[18]. They revealed that SPHK1 promotes the EMT by stimulating autophagy and then accelerating the lysosomal degradation of the epithelial marker E-cadherin in HCC cells. According to current reports and our results, we consider that HJURP can promote EMT via SPHK1.

We have reported that high expression of HJURP predicts lower overall survival rate of HCC patients[8]. In this work, we found that high HJURP expression positively correlated with EMT and microvascular invasion in HCC individuals. As microvascular invasion is a major step in the process of tumor metastasis, we consider that those two findings consistent with each other.

All clinical tissues used in this experiment were from the First Affiliated Hospital, Zhejiang University School of Medicine, Zhejiang, China. The research was approved by the Ethical Review Committee of this hospital. And informed consent was obtained according to the guidelines of the Declaration of Helsinki. All experiments also have been conducted in accordance with relevant national legislation on the use of animals for research.