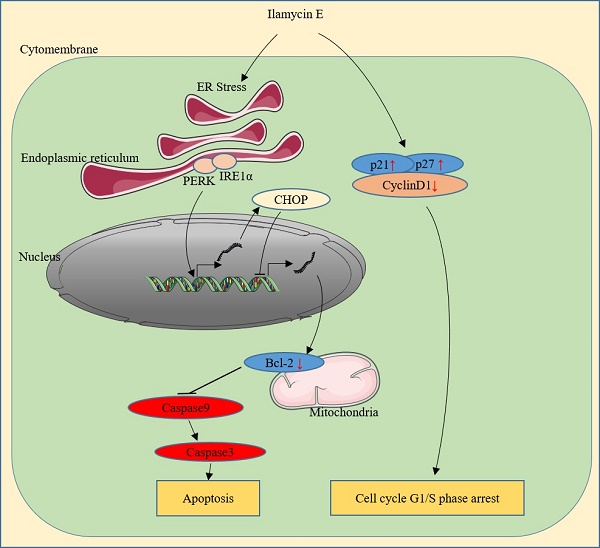 Breast cancer is the most commonly diagnosed cancer and the leading cause of cancer death among women in the worldwide. Triple-negative breast cancer (TNBC) has a poor clinical outcome. The antitumor efficacy of Ilamycins, natural products with anti-tuberculosis activity isolated from deep sea-derived Streptomyces atratus, in TNBC has not been investigated, and the mechanisms remain elusive. Here, we demonstrated that Ilamycin-E, but not -F, decreases cell viability, inhibits G1/S cell cycle progression, and promotes apoptosis in the TNBC cell lines HCC1937 and MDA-MB-468. Ilamycin E promotes apoptosis via activation of endoplasmic reticulum (ER) stress, increasing the expression of CHOP, and down-regulating the expression of anti-apoptotic protein Bcl-2. Depletion of CHOP or overexpression of Bcl2 significantly rescued Ilamycin E-induced apoptosis. These findings indicate that Ilamycin E has anti-cancer activity in TNBC.

Breast cancer is the leading cause of cancer-related deaths among women worldwide. It was reported that there were 626,679 estimated deaths and 2,088,849 estimated new cases of breast cancer in the worldwide in 2018 [1]. According to the expression status of estrogen receptor (ER) α, progesterone receptor (PR) and human epidermal growth factor 2 (HER-2), breast cancers are divided into the luminal (ER+ and/or PR+), HER-2 (HER-2+), and triple-negative (ER-/PR-/HER-2-) subtypes. Triple-negative breast cancer (TNBC), which accounts for 15-20 % of breast cancers, is the most malignant subtype with relatively poorer prognosis compared with other breast cancer subtypes. Because of the lack of molecular targets for therapy, surgery, radiation therapy and chemotherapy are still the main choices for TNBC patients [2-4]. Thus, it is urgent to develop new effective therapies for TNBC.

Natural compounds, which were extracted from medicinal plants and microorganisms, provide good resources for anti-cancer drug development [10-12]. For example, Taxol and Vincristine are widely used anti-cancer drugs in the clinic [13]. As the most abundant resource on the earth, ocean organisms are a very promising source for anti-cancer drug discovery [12, 14]. Ilamycins are a series of cyclic peptides with anti-tuberculosis activity that are produced by Streptomyces atratus and Streptomyces islandicus [15-19]. The anti-tumor activities of Ilamycins in MCF7 cells have been investigated [18]. Whether Ilamycins have anti-cancer activities in triple-negative or other breast cancer cells has not been reported. Here, we demonstrated that Ilamycin E, a new analogue of Ilamycin, exhibits potent anti-cancer activity in TNBC cells in a time- and dosage-dependent manner. Ilamycin E significantly inhibited G1/S cell cycle progression and cell proliferation. Additionally, Ilamycin E effectively induced apoptosis via down-regulating Bcl-2 expression. We further demonstrated that Ilamycin E suppressed Bcl-2 expression via inducing ER stress, which activates CHOP in both HCC1937 and MDA-MB-468 breast cancer cell lines. These results suggest that Ilamycin E has anti-cancer activity in TNBC.

The discovery, structural elucidation and biosynthesis of Ilamycin E and Ilamycin F have been described previously [18, 19]. All compounds were dissolved in DMSO (Sigma, St Louis, MO, USA).

Cell viability was measured by sulforhodamine B (SRB, Sigma, St. Louis, MO) assays [20]. Briefly, cells were fixed with 10 % trichloroacetic acid (TCA, Sigma) at 4 °C for 60 minutes at the indicated time, followed by incubation with 0.4 % SRB (w/v) solution in 1 % acetic acid for 5 minutes at room temperature. Finally, the SRB was dissolved with 10 mM unbuffered Tris base, and the absorbance was measured at a single wavelength of 490-530 nm on plate reader (BioTek, VT, USA). Proliferation of HCC1937 and MDA-MB-468 cells was measured with Click-iT® EdU Flow Cytometry Assay Kits (Invitrogen, Carlsbad, CA, USA).

HCC1937 and MDA-MB-468 cells were seeded in six-well plates at a density of 2.0×105 and 2.4×105 cells per well, respectively. One day after plating, the cells were treated with Ilamycin E at the indicated dosages. Twenty-four and thirty-six hours later, the cells were collected and fixed with 75 % cold ethanol at 4 °C overnight. After fixation, cells were stained with propidium iodide (PI, eBioscience, San Diego, CA, USA) buffer (0.3 % NP-40, 0.05 mg/ml PI, 0.5 mg/ml RNase A) at room temperature for 30 minutes followed by analysis on an Accuri C6 flow cytometer (BD Biosciences, San Diego, USA) within 4 h.

HCC1937 and MDA-MB-468 cells were seeded in six-well plates at densities of 2.0×105 and 2.4×105 cells per well, respectively. All cells and media were collected after being incubated with Ilamycin E at the indicated dosages for 24-36 hours. Cells were then collected and stained with anti-Annexin V antibody and PI (eBioscience, San Diego, CA, USA). Finally, all cells were analyzed on an Accuri C6 flow cytometer.

We used Lipofectamine 2000 (Invitrogen) for siRNA and plasmid transfection according to the manufacturer's recommended protocols. Control siRNA was purchased from RiboBio Co., Ltd (Guangzhou, Guangdong, China). The sequences of CHOP siRNA are 5'-GGUCCUGUCCUCAGAUGAA-3' and 5'-CUGAUUGACCGAAUGGUGATT-3'. The siRNA target sequences for the human Bax gene are 5'-GTGCCGGAACTGATCAGAA-3' (Baxsi#1), 5'-GCTGGACATTGGACTTCCT-3' (Baxsi#2), 5'-AGTGGCAGCTGACATGTTT-3' (Baxsi#3). The siRNA target sequences for the human Bim gene are 5'-GCAACCTTCTGATGTAAGT-3' (Bimsi#1), 5'-CCTACAGACAGAGCCACAA-3' (Bimsi#2), and 5'-CCAGGCCTTCAACCACTAT-3' (Bimsi#3). Pooled siRNAs were used to knock down target genes.

The Bcl-2 cDNA was amplified and cloned into the pCDH lentiviral vector using forward primer, 5'-CGGAATTCATGGCGCACGCTGGGAGAACA-3' and reverse primer 5'-TAAAGCGGCCGCTCACTTGTGGCCCAGATAGGCA-3'. The plasmid was confirmed by DNA sequencing. For lentivirus packaging, HEK293T cells were seeded in 10-cm plates at a density of 3×106 per dish. The next day, the cells were transfected with pCDH-Bcl2/pCDH and packaging plasmids using Lipofectamine 2000 according to the manufacturer's protocols. Lentiviruses were collected at both 48 and 72 hrs after transfection and used to infect HCC1937 cells. The infected cells were selected using 1 μg/ml puromycin to generate stable cell populations. 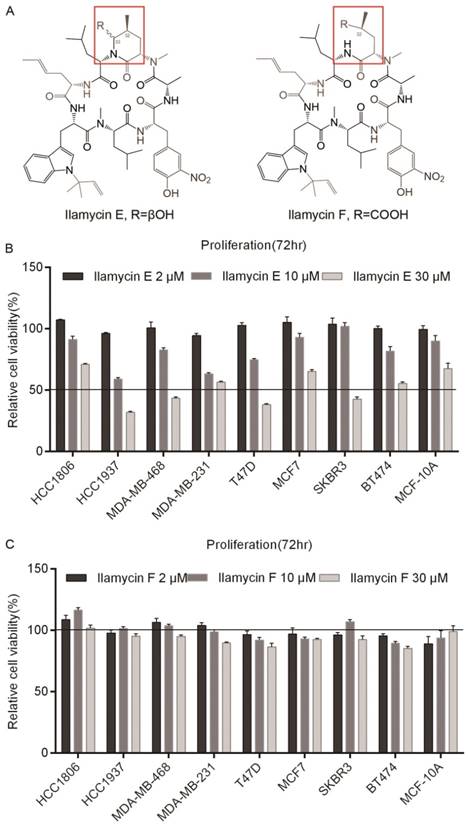 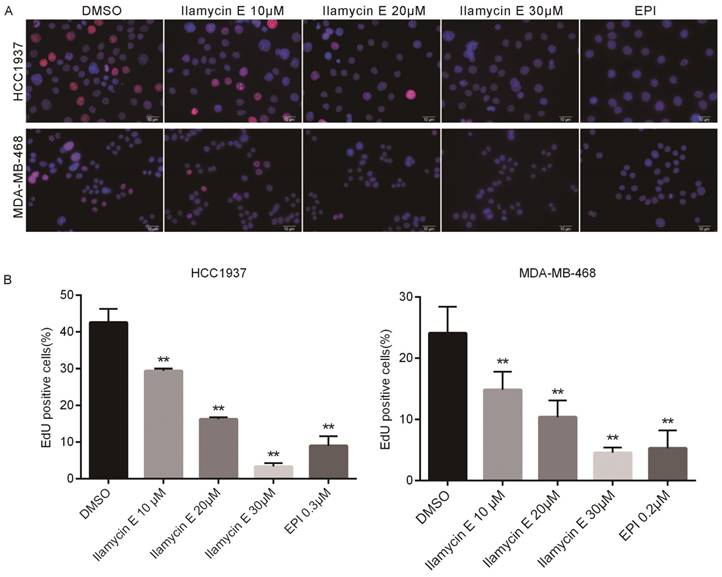 We further tested whether Ilamycin E inhibits cell cycle progression in HCC1937 and MDA-MB-468 cells. As shown in Fig. 3A-B, the proportion of cells in G0/G1 phase was significantly increased after Ilamycin E treatment, while those in S and G2 phases were dramatically decreased. These results indicated that Ilamycin E induced G1/S cell cycle arrest in these cell lines.

To investigate whether Ilamycin E induces apoptosis, we treated HCC1937 and MDA-MB-468 cells with Ilamycin E and measured apoptosis by AnnexinⅤstaining. As shown in Fig. 4A-B, Ilamycin E dramatically induced apoptosis in HCC1937 and MDA-MB-468 cells as indicated by the increase of Annexin V positive cells. We further examined the cleavage of PARP and Caspase-3 and -7 and found that Ilamycin E (20-30 μM) significantly increased the cleavage of these proteins (Fig. 4C-D). Meanwhile, Ilamycin E decreased the protein levels of Bcl-2, but not Bcl-xL and Mcl1, in dose and time dependent manners (Fig. 4C-D). We noticed that the cleavage of Caspase 9, but not Caspase 8, was significantly induced by Ilamycin E (Fig. 4C-D), suggesting that Ilamycin E induced TNBC apoptosis most likely via the intrinsic but not extrinsic pathway. 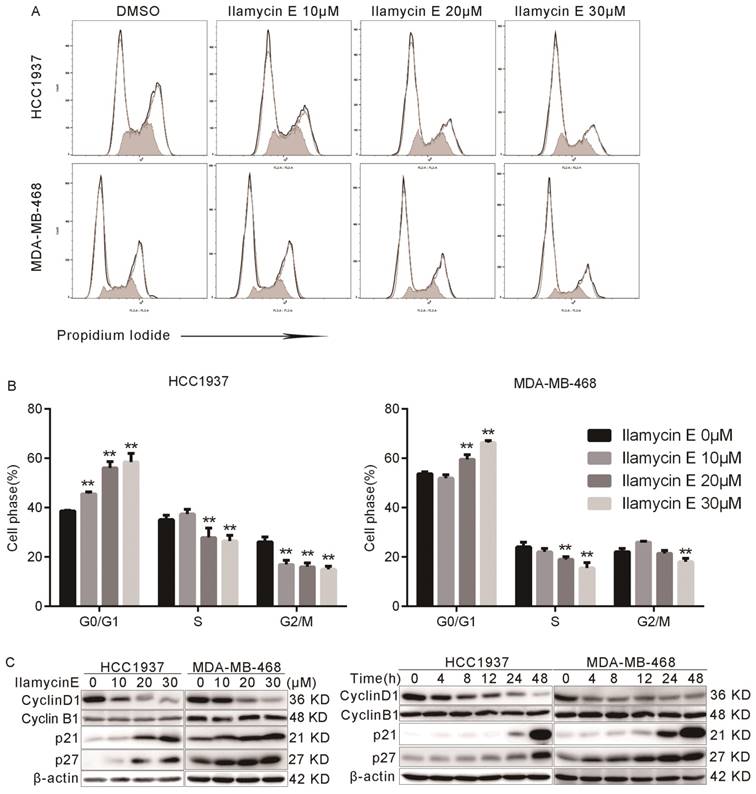 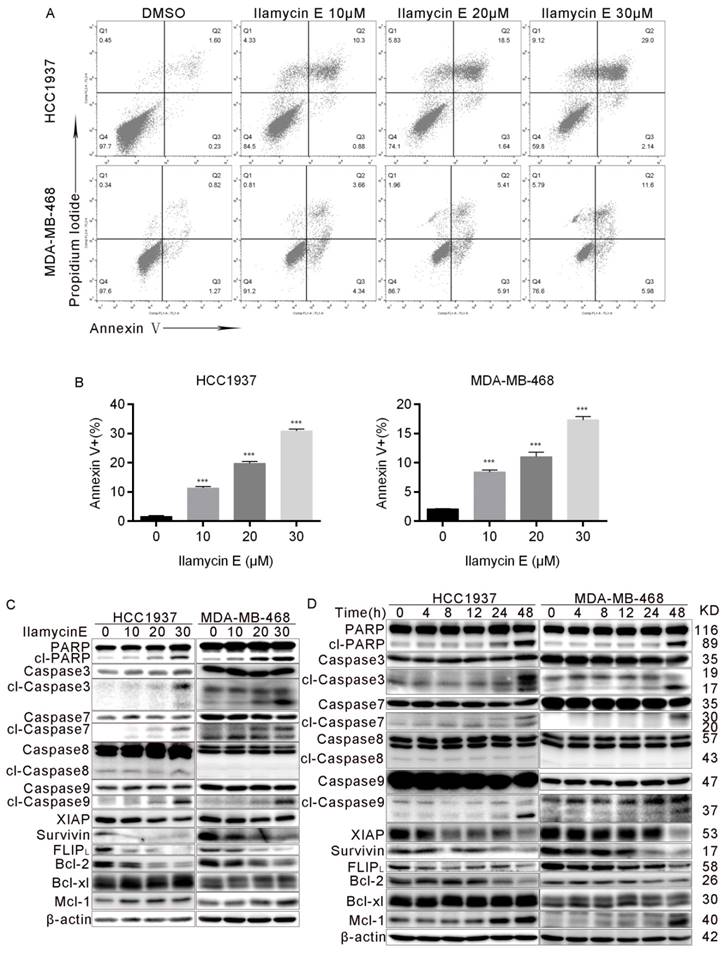 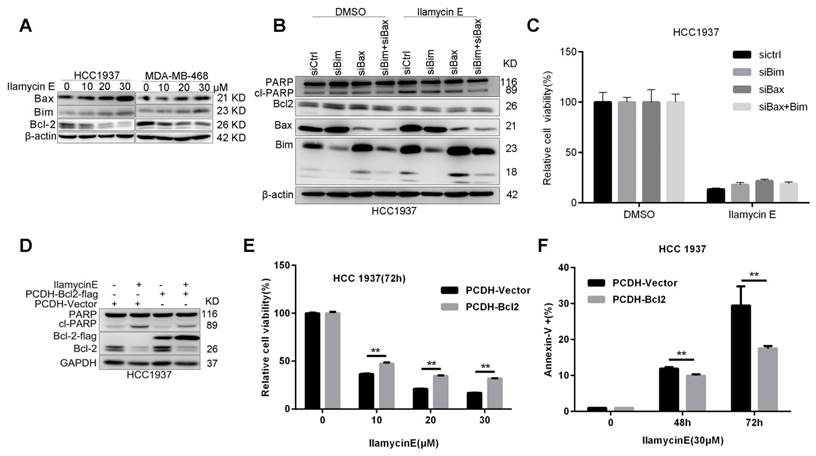 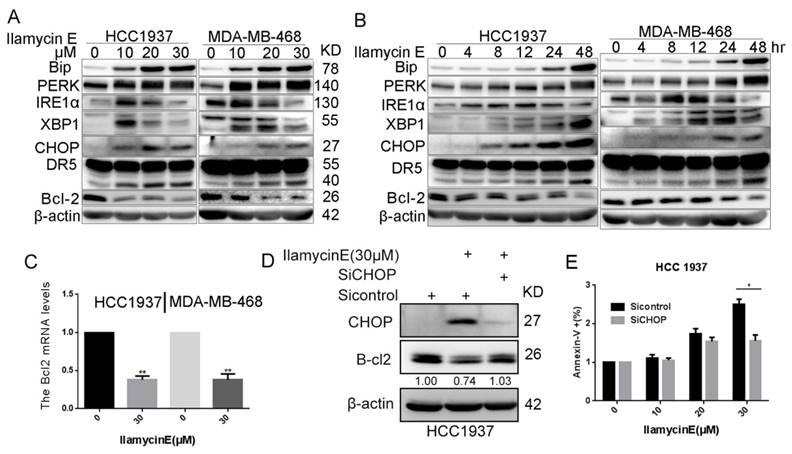 Ilamycin E is a new natural product with anti-tuberculosis activities and anti-tumor activities isolated from the deep sea-derived Streptomyces atratus [18]; however, it is unclear whether this compound has anti-tumor activities to TNBC cancer cells or other breast cancer cell lines. In this study, we demonstrated that Ilamycin E exhibits potent anti-tumor activities in eight breast cancer cell lines, including TNBCs, with IC50 values varying from 14 to 48 µM. Ilamycin E not only strongly inhibited TNBC cell proliferation and cell cycle progression, but also potently induced apoptosis. Ilamycin E up-regulated the expression of cell cycle inhibitors p21 and p27, down-regulated the expression of CyclinD1 and anti-apoptotic protein Bcl-2. Furthermore, we demonstrated that Ilamycin E decreased the transcription of Bcl-2 via inducing ER stress downstream transcription factor CHOP [25](Fig. 4). Knockdown of CHOP or over-expression of Bcl-2 significantly reduced Ilamycin E-induced apoptosis. These findings suggest that Ilamycin E inhibits TNBC partially through the ER stress-CHOP-Bcl-2 axis. It is worth pointing out that the anti-cancer activities of Ilamycin E are not limited to TNBC.

7. Luo B, Lee AS. The critical roles of endoplasmic reticulum chaperones and unfolded protein response in tumorigenesis and anticancer therapies. Oncogene. 2013;32:805-18