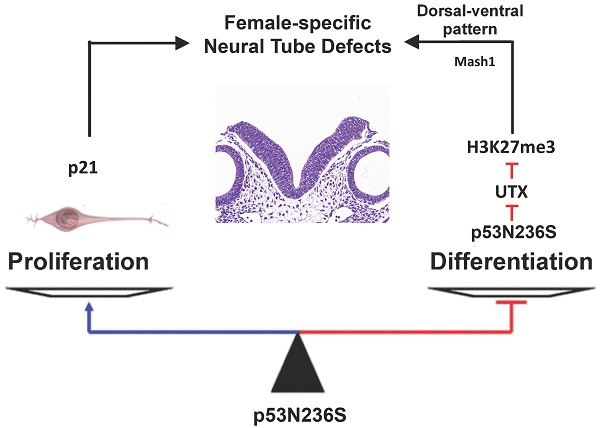 The p53 is one of the most important tumor suppressors through surveillance of DNA damages and abnormal proliferation signals, and activation the cell cycle arrest and apoptosis in response to stress. However, the mutation of p53 is known to be oncogenic by both loss of function in inhibiting cell cycle progress and gain of function in promoting abnormal proliferation. In the present study, we have established a knock in mouse model containing an Asn-to-Ser substitution at p53 amino acid 236 by homologous recombination (p53N236S). Other than tumorigenesis phenotype, we found that p53S/S mice displayed female-specific phenotype of open neural tube in brain (exencephaly) and spinal cord (spina bifida). The occurrence rate for embryonic exencephaly is 68.5% in female p53S/S mice, which is much more than that of in p53-/- mice (37.1%) in the same genetic background. Further study found that p53N236S mutation increased neuronal proliferation and decreased neuronal differentiation and apoptosis. To rescue the phenotype, we inhibited cell proliferation by crossing Wrn-/-mice with p53S/S mice. The occurrence of NTDs in p53S/S Wrn-/-mice was 35.2%, thus suggesting that the inhibition of cell proliferation through a Wrn defect partially rescued the exencephaly phenotype in p53S/S mice. We also report that p53S decreased expression of UTX at mRNA and protein level via increasing Xist transcript, result in high female-specific H3K27me3 expression and repressed Mash1 transcription, which facilitating abnormal proliferation, differentiation, and apoptosis, result in the mis-regulation of neurodevelopment and neural tube defects (NTDs).