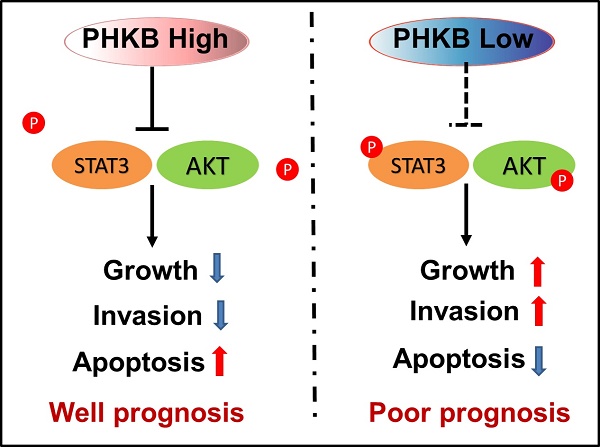 Glycogen phosphorylase kinase β-subunit (PHKB) is a regulatory subunit of phosphorylase kinase (PHK), involving in the activation of glycogen phosphorylase (GP) and the regulation of glycogen breakdown. Emerging evidence suggests that PHKB plays a role in tumor progression. However, the function of PHKB in HCC progression remains elusive. Here, our study revealed that the expression of PHKB significantly decreased in HCC tissues, and the low expression of PHKB could serve as an independent indicator for predicting poor prognosis in HCC. Functional experiments showed that PHKB knockdown significantly promoted cell proliferation both in vitro and in vivo, whereas PHKB overexpression resulted in opposing effects. Additionally, in vitro assays revealed that the over (or high) expression of PHKB greatly hindered HCC cell invasion and increased apoptosis rates. Also, we found that the over (or high) expression of PHKB effectively suppressed the epithelial-mesenchymal transition, which was further confirmed by our clinical data. Intriguingly, the biological function of PHKB in HCC was independent of glycogen metabolism. Mechanically, PHKB could inhibit AKT and STAT3 signaling pathway activation in HCC. Collectively, our data demonstrate that PHKB acts as a novel prognostic indicator for HCC, which exerts its suppression function via inactivating AKT and STAT3. Our data might provide novel insights into progression and facilitate the development of a new therapeutic strategy for HCC.