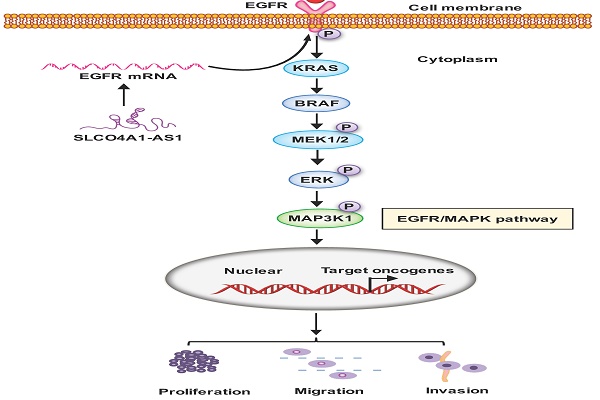 It is universally acknowledged that long non-coding RNAs (lncRNAs) involved in tumorigenesis in human cancers. However, the function and mechanism of many lncRNAs in colorectal cancer (CRC) remain unclear. By analyzing the two sets of CRC-related gene microarrays data, downloaded from the Gene Expression Omnibus (GEO) database and the lncRNA expression in a set of RNA sequencing data, we found that lncRNA SLCO4A1-AS1 was significantly upregulated in CRC tissues. We then collected CRC tissue samples and verified that SLCO4A1-AS1 is highly expressed in CRC tissues. Furthermore, SLCO4A1-AS1 was also upregulated in the CRC cell line. In situ hybridization results showed that high expression of SLCO4A1-AS1 was associated with poor prognosis in patients with CRC. Next, we found that SLCO4A1-AS1 promoted CRC cell proliferation, migration, and invasion. Results of western blotting assays show that its mechanism may relate to the epidermal growth factor receptor (EGFR)/mitogen-activated protein kinase (MAPK) pathway. Therefore, SLCO4A1-AS1 may be a potential biomarker for CRC prognosis and a new target for colorectal cancer therapy.

Colorectal cancer (CRC) is the third most common cancer in the world1,2, also is the second leading cause of cancer-related death3. In 2018, more than 860,000 patients died of colorectal cancer all over the world, and the mortality rate is 8% to 9%4. Recently, with the changes in the Western diet, the incidence of colorectal cancer is increasing. Surgery is the most effective treatment for colorectal cancer5,6. Over 90% of CRC patient can be cured by surgery if diagnosed at an early stage7. With the increasing development of multidisciplinary, radiotherapy and chemotherapy, the survival and quality of life of patients with colorectal cancer have been improved. Unfortunately, patients with CRC are often diagnosed as advanced, with a poor prognosis and a lower 5-year survival rate8. In recent years, it has been found that long non-coding RNAs can be used as a new target for cancer diagnosis and treatment, and has important research value9-13.

Long non-coding RNAs (lncRNAs) is a kind of non-coding RNAs with more than 200 nucleotides in length14,15. Recently a variety of evidence has shown, lncRNAs play a crucial role in promoting tumors or suppressing tumors during tumorigenesis and development16-19. Meantime, they involved in the regulation of apoptosis, cellular differentiation, tumorigenesis and metastasis20. In addition, they also influence the growth of tumor cells through epigenetic regulation, regulate the expression of genes at the transcriptional and post-transcriptional levels21-23 or tightly associated with chromatin remodeling24, and thus play an essential role in many physiological processes (such as cancer), affecting the occurrence of tumors, development, invasion, and metastasis and relationship with prognosis25-28. What's more, recent studies have shown that tumorigenesis is associated with dysregulation of lncRNAs, and many studies have confirmed that lncRNAs play an important role in the pathogenesis of colorectal cancer29-33. In addition, lncRNAs expression can provide clinical information about tumor outcomes and can be used as a diagnostic or prognostic marker34-39. However, the clinical significance and biological mechanisms of lncRNAs in the progression of CRC remain largely unknown.

Two sets of CRC-related gene microarrays GSE32323, GES39582 and RNA sequencing data set GSE104836 were obtained from the GEO database. Among them, GSE32323 contains 17 tumor tissues and 17 normal tissues, and GES39582 contains 433 tumor tissues and 19 normal tissues. We filtered the background noise from the gene expression profile and then analyzed the data using Significant Analysis of Microarray (SAM) software. The cut-off fold change value for differentially expressed lncRNA was set at ≥ 1.5-fold change and false discovery ratio (FDR) was < 0.05. The significant lncRNAs in GSE32323, GSE39582 were demonstrated by heat maps generated using Genesis software. GSE104836 contains 10 tumor tissues and 10 normal tissues. We use MORPHEUS, a kind of versatile matrix visualization and analysis software to view GSE104836 dataset as a heat map. https://software.broadinstitute.org/morpheus/.

In situ hybridization and scoring evaluation

The experiment was conducted according to the manufacturer protocol using the sensitive enhanced in situ hybridization kit of BOSTER Company (Wuhan, China). A semi-quantitative scoring standard of ISH was used in which the staining intensity and the number of positive regions were recorded40. The scoring was graded as 0 (negative), 1 (< 10% positive), 2 (10% - 50% positive), or 3 (> 50% positive) in accordance with the staining proportion and intensity. The final scores were regarded as low expression (0-1) and high expression (2-3). All sections were independently scored by two pathologists who were blinded to the clinicalpathological features and the clinical data.

CCK-8 and clone formation assays were used to measure cell proliferative capacity. For the CCK-8 assay, cells were seeded into 96-well plates. At the indicated time point, 10 µl of CCK-8 solution was added to each well and incubated for 4 hours at 37 °C. Then, the absorbance at 450 nm was measured. For the clone formation assay, 2000 cells per well were seeded in 6-well plates and cultured for 2 weeks. Then colonies were fixed with 4% paraformaldehyde and stained with 2.5% crystal violet.

Wound healing assays were used to examine CRC cell migration ability. Cells were seeded in six-well plates. After 24 hours of transfected siRNA, a vertical wound in the cell monolayer was generated through a 10 µl tip and washed three times with PBS to remove cell debris. The wound width was measured by a microscope at the designated time periods and the wound area was calculated using Image J.

Transwell analysis with Matrigel was used to measure tumor cell invasion capacity. Next, a total of 2×105 cells in 100 µl of 2% FBS medium was added to the top of a transwell cell culture chamber (8 µm pore size, BD Biosciences, New Jersey, USA) coated with 50 µl Matrigel (BD Biosciences, USA), and 600 µl of 20% FBS containing medium was added to the lower chamber. The cells were incubated at 37 °C or 24 hours, and then, migrated tumor cells were fixed with 4% paraformaldehyde and stained with 2.5% crystal violet. Cells on the upper surface were wiped by a cotton bud. The number of invasive cells was counted from 6 randomly selected 100× fields under the microscope and shown as the average for average per field.

All experiments were independently repeated at least triplicate. All statistical analyses were performed using Excel software version 2007 (Microsoft, USA) and performed using Graphpad prism 5 software. All data are represented as mean ± SEM and differences between the two independent groups were evaluated by Student's t-test. Overall survival (OS) was calculated using the Kaplan-Meier method, and the results of the analysis were considered significantly in a log-rank test if P<0.05. A two-tailed P value of 0.05 or less was considered statistically significant.

SLCO4A1-AS1 is highly expressed in CRC

We downloaded two gene microarrays datasets GSE32323, GES39582, and RNA sequencing dataset GSE104836 from the GEO database to explore the differential expression of lncRNAs between CRC and normal tissues (Figure 1A). Through aggregation of differentially expressed lncRNAs from these two datasets of gene microarrays, 18 overlapping probsets, revealing 12 upregulated and 6 downregulated lncRNAs (Figure 1B and 1C). Further comparison with the GSE104836 dataset revealed 12 genes that were differentially expressed, including 7 upregulated and 5 downregulated lncRNAs (Figure 1A, 1D). SLCO4A1-AS1 expression was one of the most significantly upregulated in the CRC tissues compared to non-tumor tissues according to the GSE32323, GES39582, and GSE104836 datasets (Figure 1E-1G).

SLCO4A1-AS1 is highly expressed in CRC. (A) Schematic overview of the workflow used to identify dysregulated lncRNAs in two CRC microarray datasets (GSE32323, GSE39582), and one RNA-seq dataset (GSE104836). (B-D) Heatmap of overlapping dysregulated lncRNAs mined from the GEO data set. (E-G) SLCO4A1-AS1 expression, as measured by Affymetrix microarray, was upregulated in CRC tissues when compared with normal colorectal tissues in GSE32323, GSE39582, and GSE104836. 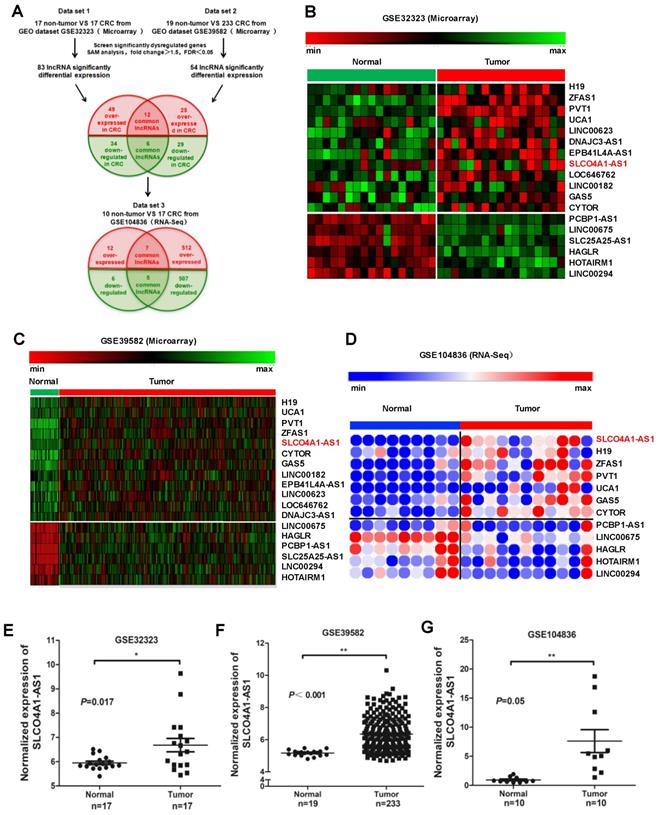 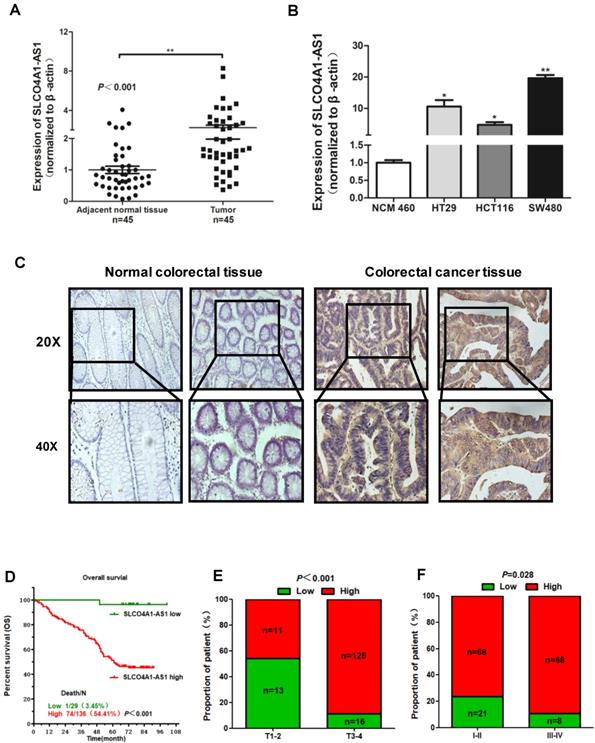 H19, ZFAS1, and PVT1, some famous oncogenic lncRNAs in many tumors, also listed and overexpressed among these overlapping probe sets41-45. Most were unknown or not well investigated in functions and mechanisms, such as SLCO4A1-AS1, LOC646762, LINC00182, and LINC00294. To investigate the role of lncRNAs in CRC, we focused on SLCO4A1-AS1 as a follow-up study, for which the expression was most significantly, and remained poorly investigated.

To further verify the expression of SLCO4A1-AS1 in CRC, we collected 45 CRC tissues and 45 adjacent normal colorectal tissues detected the expression level of SLCO4A1-AS1 by RT-PCR. The results showed that SLCO4A1-AS1 was significantly upregulated in CRC tissues compared to adjacent normal colorectal tissues (Figure 2A, P=0.001). This is consistent with the results of the GEO dataset. In addition, SLCO4A1-AS1 was also overexpressed in three CRC cell lines HT29, HCT116, SW480 compared with NCM460, a normal colon cell line (Figure 2B, P<0.050, P<0.050, P<0.010).

Correlation of clinical parameters with SLCO4A1-AS1 in CRC 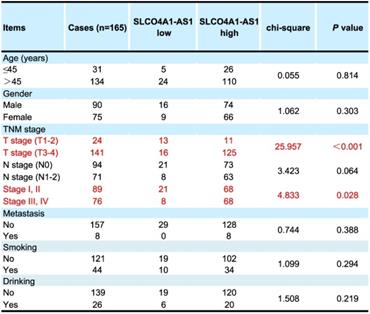 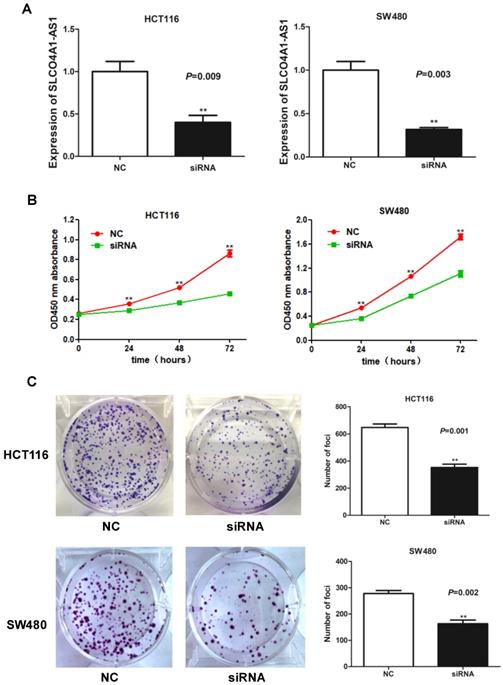 Knockdown of SLCO4A1-AS1 inhibits CRC cell migration and invasion in vitro. (A and B) HCT116 and SW480 cells were transfected with SLCO4A1-AS1 siRNA, or scramble siRNA. 24 hours after transfection, cells were subjected to a wound healing assays or transwell assays to measure migration (P<0.010, P<0.010) or invasive capacity (P=0.002, P=0.001). 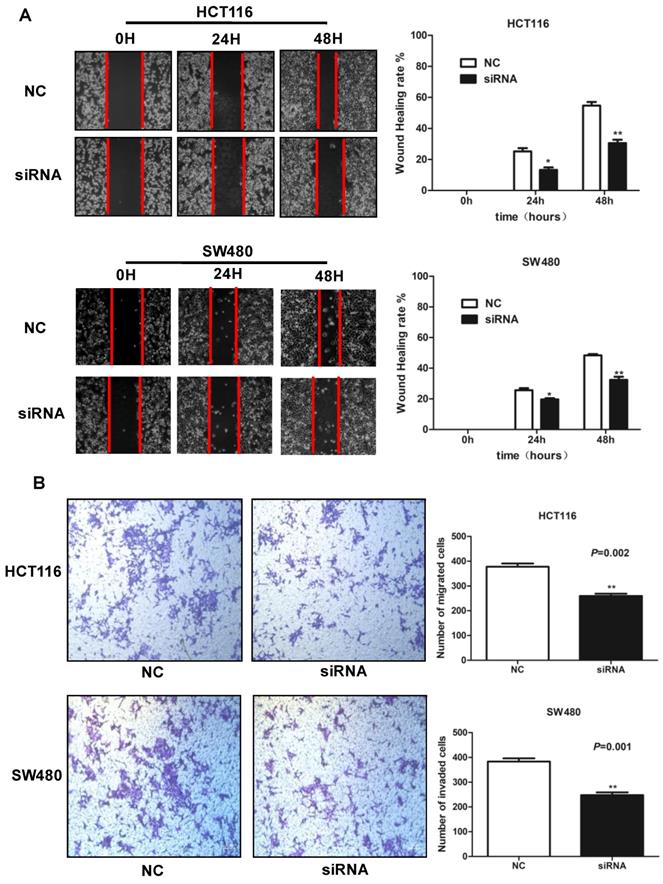 Recent studies have shown that lncRNAs play an important role in tumor differentiation, proliferation, metastasis and other tumor development processes15,47,48. The pathogenesis and carcinogenic mechanisms of CRC are multifactorial and complex processes involving different genetic and epigenetic changes. LncRNA has been found to play an important role in the occurrence and development of CRC, including: APC49,50, OCC-133, FEZF1-AS147,51, SNHG552,53 and so on.

In this study, we combined two GEO gene microarrays datasets to construct a differential expression profile of lncRNA, and combined the sequencing dataset to construct a common differential expression profile, and screened lncRNA SLCO4A1-AS1 for subsequent expression verification, functional exploration and molecular mechanism. High expression of SLCO4A1-AS1 in CRC is associated with the poor prognosis of CRC patients and as a potential biomarker. After siRNA-mediated silencing of SLCO4A1-AS1, we found that it significantly inhibited the proliferation, migration and invasion of CRC cells. Studies have shown that the EGFR/MAPK pathway is involved in cell proliferation, promote tumor development and play a key role in the development of CRC54-56. EGFR is abnormally expressed in cancer57. The MAPK pathway is one of the major downstream effectors of EGFR. The EGFR/MAPK pathway is aberrantly activated in CRC, which is thought to be responsible for cancer cell proliferation, migration, and invasion55.

Identification of SLCO4A1-AS1 regulated genes in EGFR/MAPK signaling pathway. (A-D) mRNA levels of EGFR/MAPK pathway-associated proteins were detected by Q-PCR in HCT116 and SW480 cells transfected with negative control (NC) or SLCO4A1-AS1 siRNA. (E) Expression of EGFR/MAPK pathway-associated proteins and its corresponding phosphorylation status proteins levels were detected by western blot in HCT116 and SW480 cells transfected with NC or SLCO4A1-AS1 siRNA. β-actin was used as an internal control. 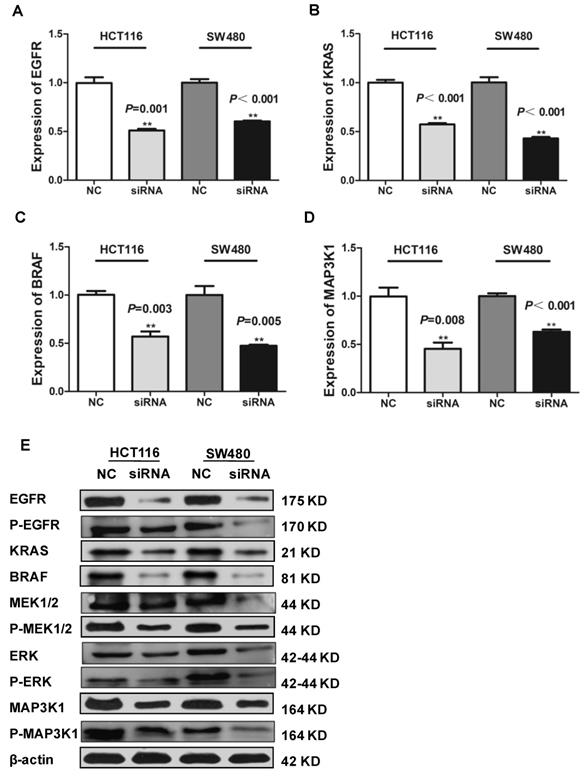 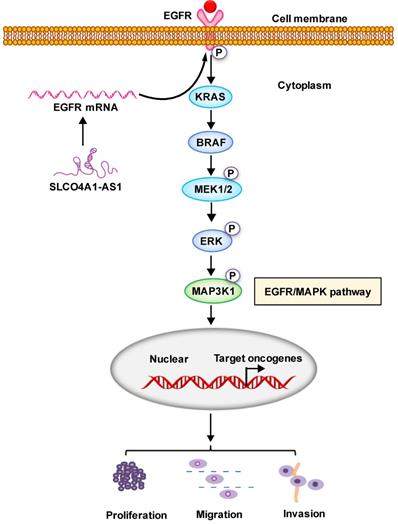 In our study, we found that SLCO4A1-AS1 knockdown severely decreased the mRNA level and protein level of EGFR, KRAS, BRAF, MEK, ERK, MAP3K1 by the mechanism that inhibited the phosphorylation. LncRNAs may associate with proteins to regulate their stability, activity or other properties62. EGFR level plays a pivot role in the MAPK pathway63. The increasing of EGFR protein level may lead to CRC metastasis64. Regulation of EGFR/MAPK signaling is complicated and delicate. How lncRNAs interact with proteins on EGFR/MAPK pathways to fine-tune proliferation, migration and invasion of CRC requires further elucidation.

In conclusion, our results suggest that SLCO4A1-AS1 may be involved in the development of CRC, which may play an important role in CRC tumorigenesis and may be a useful biomarker for predicting CRC prognosis. We contend that SLCO4A1-AS1 activates EGFR/MAPK pathway, facilitates the proliferation, migration and invasion of CRC cancer cells. SLCO4A1-AS1 may serve as potential targets for future treatment (Figure 6).

This study was supported by grants from the Natural Science Foundation of Hunan Province (2018JJ3634), and the Changsha Science and Technology Project (kq1901071, kq1901072). We thank for the helpful bioinformatic analysis by Dr. Ping Zhang, the help of all members in the Colorectal Surgery for specimen collection, and the support of the Central Laboratory for the use of their shared equipment and services.

The authors confirm that written consents have been obtained from the patients, to publish this manuscript.

Availability of data and material

Clinicopathological data were collected from patient medical records, and have been reported in the Supplemental Table S1.