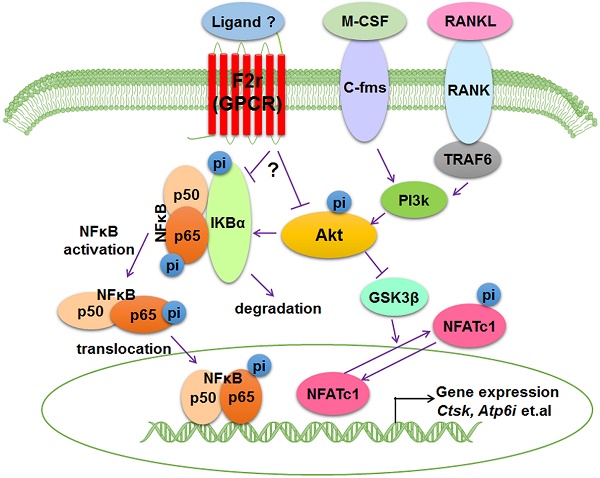 G-protein-coupled receptors (GPCRs) are pivotal drug targets for many diseases. Coagulation Factor II Thrombin Receptor (F2R) is an important member of GPCR family that is highly expressed in osteoclasts. However, the role of F2r in osteoclasts is still unclear. Here, to examine the functions of F2r on osteoclast formation, differentiation, activation, survival, and acidification, we employed loss-of-function and gain-of-function approaches to study F2r using F2r-targeted short hairpin RNA (sh-F2r) lentivirus and overexpression plasmid pLX304-F2r lentivirus respectively, in mouse bone marrow cells (MBMs) induced osteoclasts. We used three shRNAs targeting F2r which had the ability to efficiently and consistently knock down the expression of F2r at different levels. Notably, F2r knockdown trigged a significant increase in osteoclast activity, number, and size, as well as promoted bone resorption and F-actin ring formation with increased osteoclast marker gene expression. Moreover, F2r overexpression blocked osteoclast formation, maturation, and acidification, indicating that F2r negatively regulates osteoclast formation and function. Furthermore, we investigated the mechanism(s) underlying the role of F2r in osteoclasts. We detected RANKL-induced signaling pathways related protein changes F2r knockdown cells and found significantly increased pAkt levels in sh-F2r infected cells, as well as significantly enhanced phosphorylation of p65 and IKBα in early stages of RANKL stimulation. These data demonstrated that F2r responds to RANKL stimulation to attenuate osteoclastogenesis through inhibiting the both F2r-Akt and F2r-NFκB signaling pathways, which lead a reduction in the expression of osteoclast genes. Our study suggests that targeting F2r may be a novel therapeutic approach for bone diseases, such as osteoporosis.

Osteoclasts are multinucleated cells derived from bone marrow monocyte/macrophage precursors [1,2]. Osteoclast differentiation from osteoclast precursors - mouse bone marrow cells (MBMs) is stimulated by two key cytokines: macrophage colony-stimulating factor (M-CSF) and receptor activator of nuclear factor-κB ligand (RANKL) [1,3]. Osteoclasts play a vital role in bone remodeling to maintain bone structure and function. Excessive osteoclastic activity causes an imbalance in bone remodeling, which leads to various bone diseases including osteoporosis, periodontal disease, rheumatoid arthritis, multiple myeloma and metastatic cancers [2,4,5]. Thus, targeting negative regulators of osteoclasts may serve as an effective approach to treat pathological bone diseases related to osteoclast over-activation [6]. However, negative osteoclast regulators have received limited attention and warrant further study. G-protein-coupled receptors (GPCR) located in the cell membrane that have evolved to couple extracellular signals into intracellular responses, and have been identified as effective targets for identifying novel therapeutic agents [7-10]. Twenty to fifty percent of FDA-approved drugs act on GPCRs in some way [11-14]. A few GPCRs have been reported to regulate osteoclast and bone related diseases [15,16], but there are more functions of GPCRs on osteoclast needed to be elucidated.

In our study, we detected the different expression of GPCRs in monocytes and osteoclast by RNA-seq. Notably, Coagulation Factor II Thrombin Receptor (F2R) was highly expressed in osteoclasts. F2r is an important member of the G-protein-coupled receptor (GPCR) family which is also known as Proteinase-Activated Receptor 1 (PAR1) [17,18]. F2r is activated by thrombin or another proteinase, causing diverse biologic activities. It is involved the progression and metastasis of various types of tumors, including sarcoma, melanoma, breast cancer, lung cancer, prostate cancer and pancreatic cancer [17-20]. F2r also plays an important role in coagulation and inflammation in response to injury [18, 21-23]. However, the effects of F2r in osteoclasts are still not clear. Here, we examined the functions of F2r in osteoclast formation, differentiation, activation, survival, and acidification by silencing and overexpressing F2r in osteoclasts precursors using lentivirus.

We also investigated the mechanism underlying the role of F2r in osteoclasts. The activation of different downstream signaling pathways (such as Akt/Gsk3β, NF-κB, ERK1/2 and p38 MAPK signaling pathways) by answering RANKL stimulation result in the expression of genes that is crucially essential to promote osteoclast differentiation, which regulated transcription factors for osteoclastogenesis [1,5]. We detected RANKL-induced signaling pathways related protein changes in F2r knockdown cells and found significantly increased pAkt levels in sh-F2r infected cells, as well as significantly enhanced phosphorylation of p65 and IKBα in early stages of RANKL stimulation. Collectively, these data demonstrated that F2r responds to RANKL stimulation to attenuate osteoclastogenesis through inhibiting both F2r-Akt and F2r-NFκB signaling pathways, which lead to a reduction in the expression of osteoclast genes. Our study suggests that targeting F2r may be a novel therapeutic approach for osteolytic diseases.

All animal experiments were performed according to the requirements and regulations of the Institutional Animal Care and Use Committee (IACUC) at University of Alabama at Birmingham (UAB). In our study, all experiments used wild type (WT, C57BL/6) mice that were purchased from The Jackson Laboratory.

F-actin ring formation was evaluated as previously determined [31]. MBMs were cultured on bovine cortical bone slices in 24-well plates or directly cultured in wells of 96-well plates, then induced to osteoclasts by M-CSF and RANKL. Cells were fixed with 3.7% formaldehyde 15 min, washed by cold PBS 3 times, and then permeabilized with 0.2% Triton X-100 10 min. Next, the cells were blocked with 1% goat serum, and incubated with rhodamine phalloidin (Life Technologies, USA) and anti-Ctsk antibody (Santa Cruz, sc-48353) over night, and then incubated with FITC anti-mouse IgG (HþL) secondary antibody in the dark. Stained cells were observed under a fluorescence microscope. For the quantification of IF stain, we used NIH Image J to perform counts.

F2r is highly expressed in osteoclasts 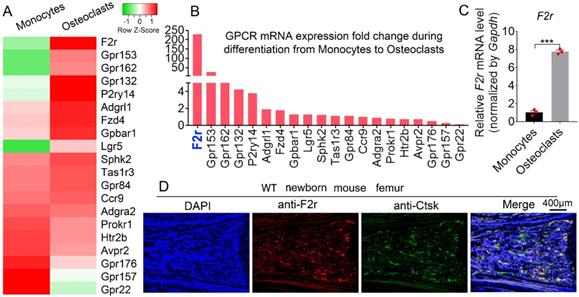 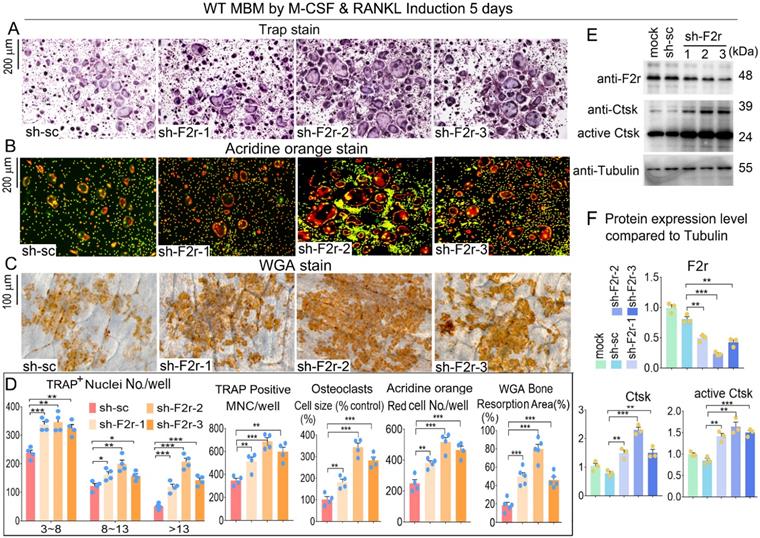 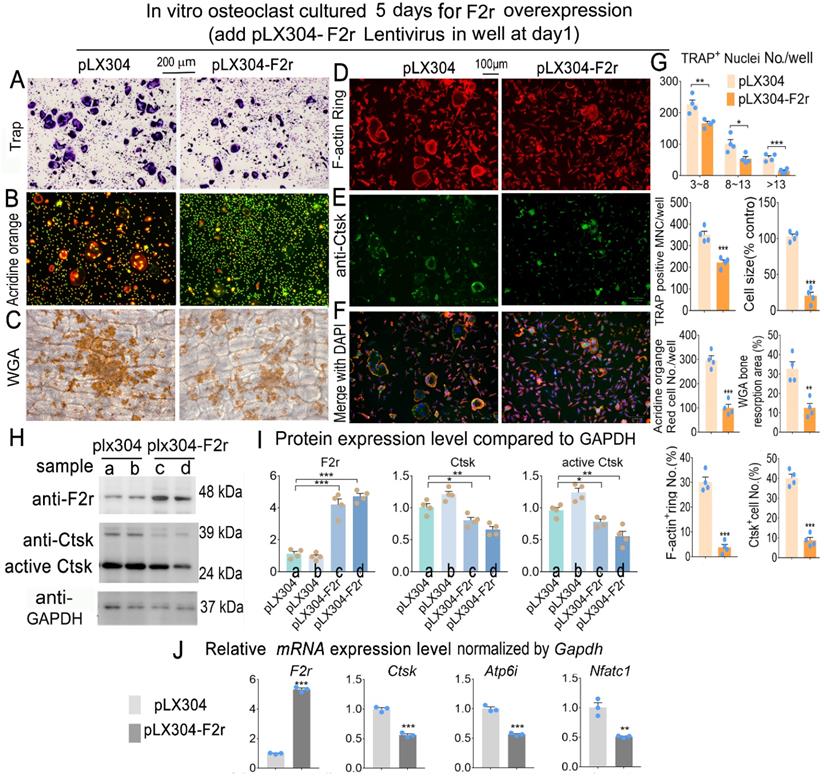 Next, we observed the formation of the F-actin ring, which is an important structure for osteoclast maturation [29]. Equal numbers of MBM cells were seeded on each bone slice and induced by M-CSF and RANKL to generate osteoclasts. Our data revealed that F2r deficient osteoclasts exhibited a significant increase in F-actin ring formation, and the average size of the osteoclasts was also about 1.8 fold larger in these cells compared to control cells (Fig. 4A, B and Fig S3). We further examined the molecular distribution of Ctsk through IF staining. Ctsk expression in osteoclasts depleted of F2r showed a significant increase (Fig. 4A, B and Fig S3). Consistently, F-actin ring formation, and osteoclast size, and Ctsk expression were all significantly reduced in the F2r overexpression group (Fig. 4C, D). Thus, F2r may play a critical role in regulating Ctsk expression, resulting in a critical role of F2r in osteoclast-mediated bone resorption. 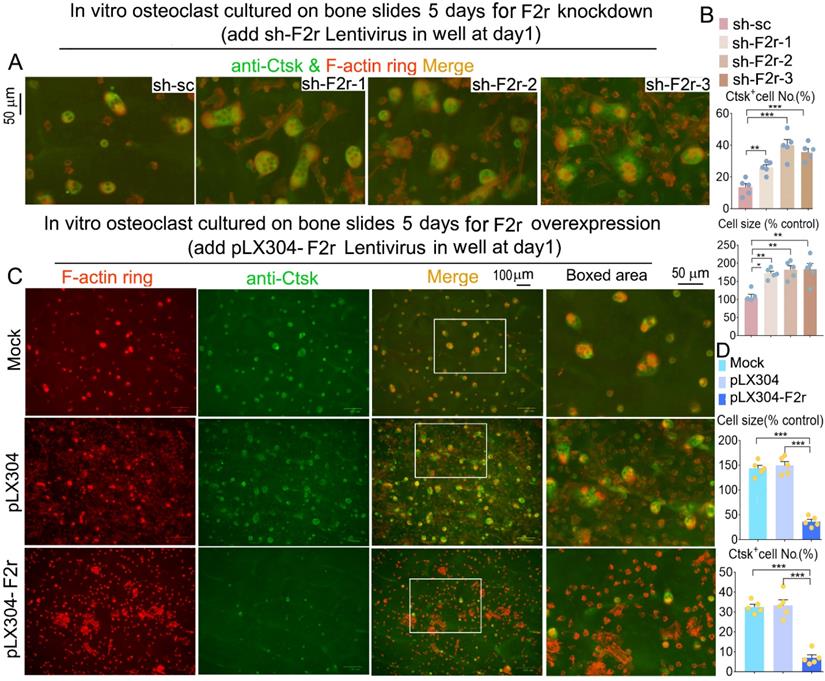 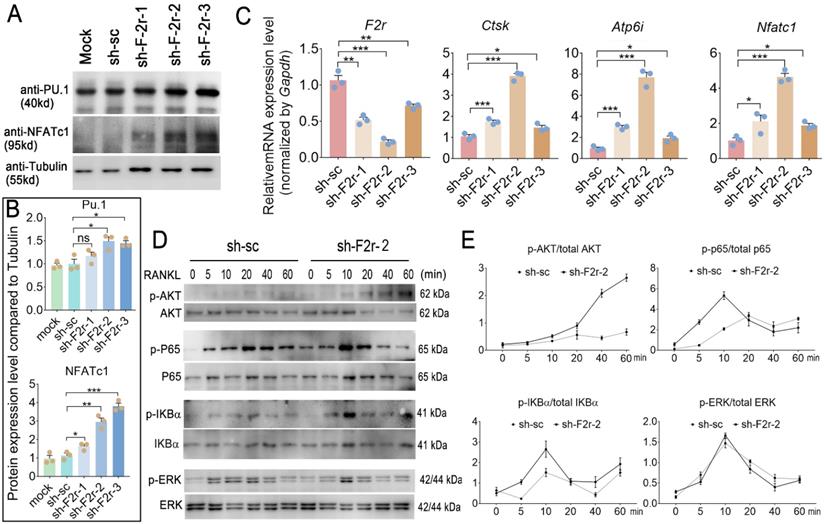 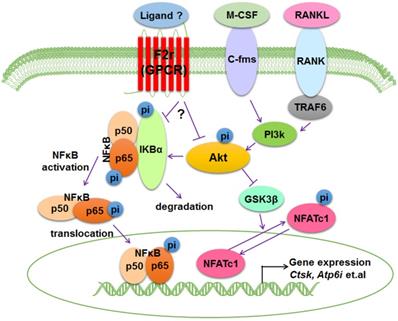 Bone is an important dynamic tissue whose remodeling is accomplished by the balance of osteoblasts and osteoclasts [35,36]. Osteoclasts are terminally differentiated bone-resorbing cells that can remove mineralized bone matrix [37]. In this study, we demonstrated that F2r is highly expressed in osteoclasts, and we proposed a model that F2r reduces osteoclast marker genes expression and antagonizes osteoclast formation by responding to RANKL stimulation to inhibit F2r-Akt-GSK3β-NFATc1 and F2r-Akt-NFκB signaling pathways (Fig. 6).

F2r, also known as PAR1, is a G-protein-coupled receptor (GPCR) which is activated by cleavage of the N-terminal domains by serine proteases [20,38,39]. The PAR family also enables cells to respond to proteases in the extracellular environment in a nuanced and dynamic manner, such as plasmin, activated protein C, thrombocytin, PA-BJ, factor Xa, factor VIIa, kallikreins, cathepsin G, trypsin, matriptase and tryptase [40]. Thrombin is the natural ligand of F2r [40,41]. Currently, GPCRs remain a major target for bone related diseases drug discovery [38,39,42,43]. F2r has been the object of large-scale drug development programs since the 1990s, and Vorapaxar and drotrecogin-α are approved F2r-targeted therapeutics [20]. New understanding of the mechanisms underlying F2r's function and the discovery of improved strategies to modify F2r function has provided new opportunities for therapies targeting F2r [20]. Previous reports have revealed that F2r plays a novel regulatory role in maintaining the hematopoietic stem cell pool in addition to the balance between hematopoiesis and bone structure [44], indicating that F2r plays a pivotal role in osteoclast and osteoblast mediated bone remodeling and bone homeostasis.

RANKL is pivotal receptor activator of the NF-κB ligand, and is also a critical cytokine required for osteoclast precursor cells survival, expansion, formation, and differentiation in vitro [46]. Binding of RANKL to RANK is a pivotal step in osteoclast development, which causes activation of downstream critical signaling such as Akt and NF-κB [47-49]. Here, we found that F2r limits Akt phosphorylation levels under RANKL stimulation, and F2r knockdown regulates transcription factor NFATc1 in osteoclasts, which indicates that activation of NFATc1 is responsible for the facilitation of RANKL-induced osteoclast formation. It has previously been shown that Akt induces osteoclast differentiation through inhibiting GSK3β signaling cascade, which can regulate NFATc1 translocation from the cytoplasm into the nucleus [5,48]. Our results demonstrate that F2r knockdown cells exhibited significantly increased pAkt levels, as well as significantly enhanced phosphorylation of p65 and IKBα in early stages of RANKL stimulation, indicating that F2r may inhibit osteoclast differentiation through suppressing the Akt-GSK3β-NFATc1 signaling cascade. However, how F2r activates Akt is still unclear and warrants further investigation. Interestingly, Jastrzebski et.al. detected the p65 expression in cytoplasmic and nuclear under RANKL (30 ng/ml) stimulated 15 min, and found no significant differences between control and F2r-defcienct cell [45]. In our study, F2r knockdown increased p65 and IKBα phosphorylation level under RANKL (10 ng/ml) stimulated at 5 min and 10 min, indicating that F2r responds to RANKL signaling at early stages of osteoclastogenesis. It could due to the dosing and treatment timing was different from the current study. Moreover, Akt phosphorylation promotes NF-κB activation that can translocate to the nucleus regulate different genes expression and influence osteoclast growth and fusion [50-52]. In osteoclasts, it needs further investigation which ligands activate F2r to inhibit osteoclast formation. Here, our data showed that F2r as a transmembrane protein that responses the stimulation of RANKL to inhibit phosphorylation level of Akt and activation of NF-κB signaling. These data demonstrated that F2r can respond to RANKL stimulation via inhibiting the NF-κB signaling pathway at the early stages of osteoclastogenesis, and through limiting Akt-GSK3β-NFATc1 signaling pathway which lead to a reduction in the expression of osteoclast marker genes. Erk signaling is also involved in osteoclast formation, proliferation, and differentiation [50,53]. However, we found no significant difference in the p-Erk level between sh-sc and sh-F2r treated groups under RANKL stimulation, indicating that F2r may not regulate Erk signaling pathway under RANKL stimulation during osteoclast proliferation and differentiation. Notably, the differential levels of F2r silencing or overexpression were consistent with the respective signaling pathway activation or inhibition seen in the osteoclasts with F2r silencing or overexpression, which indicates that targeting F2r through shRNA may be an effective target for bone disease. In summary, our results from both loss-of-function and gain-of-function strategies revealed that F2r is a key negative regulator of osteoclastogenesis, which inhibits the Akt-GSK3β-NFATc1 and NFκB signaling pathways, suggesting that F2r can be as a novel therapeutic target for bone diseases, such as osteoporosis.

We thank Ms. Abigail McVicar for her excellent assistance with the manuscript. This work was supported by National Institutes of Health [AR-070135 and AG-056438 to W.C.]. Yan Zhang was sponsored by the China Scholarship Council (201706290105).