Hepatocellular carcinoma (HCC), the most common liver malignancy, is one of the leading causes of cancer-related deaths globally [1]. Due to the high rate of infection with hepatitis B virus (HBV), China accounts for half of new cases and deaths of HCC worldwide [2]. Although great advances in therapeutic strategies for HCC have been made in recent years, the clinical outcome of patients is still poor due to high frequency of postsurgical recurrence and metastasis [3]. Thus, it is crucial to investigate the mechanisms involved in HCC progression and explore new therapeutic targets.

Long noncoding RNAs (lncRNAs), which cannot be translated into proteins and are longer than two hundred nucleotides, have been shown to be key regulators in the initiation and progression of various cancers [4]. For example, lncRNA LINC00689 facilitates proliferation, migration, invasion and glycolysis in glioma cells [5]. LncRNA IQCJ-SCHIP1-AS1 is expressed at low levels in colorectal cancer (CRC) and inhibits cancer cell proliferation by regulating cell cycle progression and apoptosis [6]. It has been widely reported that lncRNAs play critical roles in the regulation of growth and metastasis in HCC by acting as competing endogenous RNAs (ceRNAs) [7-12]. For instance, lncRNA MCM3AP-AS1 contributes to the growth of HCC by acting as a molecular sponge for miR-194-5p to enhance forkhead box A1 (FOXA1) expression [7]. LncRNA CASC2 represses the migration, invasion and epithelial-to-mesenchymal transition (EMT) of HCC cells by targeting the miR-367/F-box and WD repeat domain containing 7 (FBXW7) axis [8]. Upregulation of SNHG7 enhances the proliferation, migration and invasion of HCC cells by sequestering miR-122-5p and increasing ribosomal protein L4 (RPL4) expression [13]. As for LINC01123, it has previously been identified as a tumor driver in non-small cell lung cancer (NSCLC) [14]. LINC01123, which is transcriptionally activated by c-Myc, facilitates proliferation and aerobic glycolysis in NSCLC cells by targeting the miR-199a-5p/c-Myc pathway [14]. Furthermore, LINC01123 combined with three other lncRNAs functions as a promising new prognostic biomarker for head and neck squamous cell carcinoma (HNSCC) [15]. However, the functions of LINC01123 in HCC and related mechanisms remain largely unknown.

Eighty pairs of tumor tissues and adjacent nontumor tissues were collected from HCC patients who underwent surgical resection and signed written informed consent at 1st Affiliated Hospital of Xi'an Jiaotong University. None of the participants had received any preoperative treatment. All tissues were pathologically confirmed and immediately preserved in liquid nitrogen. This study was approved by the Ethics Committee of 1st Affiliated Hospital of Xi'an Jiaotong University and complied with the 1964 Helsinki declaration and its later amendments [16].

Transfected HCC cells (1×104) in serum-free medium were added to the upper chamber of transwell inserts coated with Matrigel (BD Biosciences, Franklin Lakes, NJ, USA). The lower chamber was filled with 500 μL of complete medium. After culturing for 24 h, invading cells were fixed with 4% paraformaldehyde and stained with 0.1% crystal violet for imaging under an inverted microscope (Olympus). In addition to the invasion assay, a cell migration assay was conducted without coating with Matrigel.

Luciferase reporter vectors LINC01123-WT/MT and TUFT1-WT/MT were constructed by inserting the wild-type (WT) LINC01123 or TUFT1 fragment and a LINC01123 or TUFT1 fragment containing mutated (MT) binding sites for miR-34a-5p into pmirGLO expression vectors (Promega, Madison, WI, USA). miR-34a-3p mimics or NC mimics were co-transfected with the above vectors for 48 h in 293T cells. The dual-Luciferase reporter assay system (Promega) was applied for detecting luciferase activity.

An in vivo tumor growth assay was performed using BALB/C nude mice as previously described [18]. Briefly, 1 × 106 Hep3B cell with or without LINC01123 knockdown were injected subcutaneously into nude mice (n=5 per group). Tumor volume was calculated with the formula: tumor volume (mm3) = (Long axis × Short axis2)/2 every three days. Three weeks after implantation, the xenograft tumor tissues were harvested and subjected to immunohistochemistry for Ki-67 staining [19]. The animal studies were approved by the Institutional Animal Care and Use Committee of the Xi'an Jiaotong University.

Correlation between LINC01123 expression and clinicopathologic characteristics in hepatocellular carcinoma

The “low” or “high” expression of LINC01123 level was defined according to the cut-off value, which was defined as the median value of the cohort of patients tested. *Statistically significant.

To clarify whether LINC01123 could act as an oncogene or a tumor suppressor in HCC, qRT-PCR was performed to analyze the expression of LNC01123 in 80 pairs, each consisting of an HCC tissue and a matched tumor-adjacent tissue. We found that LNC01123 expression was significantly upregulated in HCC tissues compared to adjacent nontumor liver tissues (P=0.0007, Figure 1A). Furthermore, we determined the expression of LINC01123 in Huh7, HepG2, Hep3B and LO2 cells. HCC cells expressed higher levels of LINC01123, while LO2 cells expressed lower levels (P<0.05, Figure 2B). Next, the chi-square test found that LINC01123 overexpression was prominently correlated with tumor size ≥ 5 cm (P=0.004), venous infiltration (P=0.025) and advanced TNM stage (P=0.003, Table 1). In addition, the log-rank test indicated that the expression of LINC01123 was also correlated with overall survival (OS) of HCC patients (P=0.0147, Figure 1C). The 5-year OS in the low LINC01123 group was clearly higher than that in the high LINC01123 group (median survival time 57.5 months versus 18.5 months). Furthermore, univariate and multivariate Cox regression analysis revealed LINC01123 level to be an independent predictor for indicating OS in HCC patients (P<0.001, Supplementary Table 2). Thus, our data revealed that the upregulated expression of LINC01123 might participate in HCC progression. 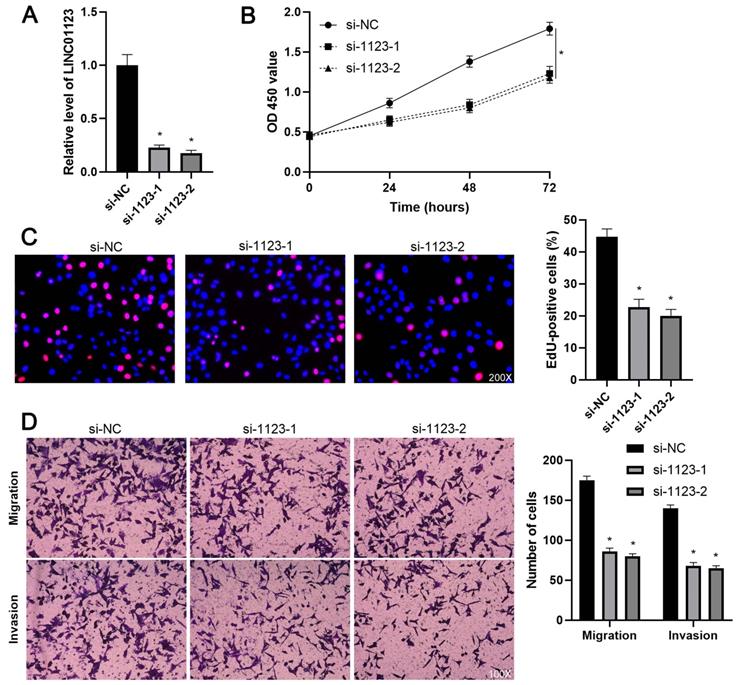 Since LINC01123 has previously been reported to act as an miRNA sponge in NSCLC [14], we sought to determine if LINC01123 could sponge corresponding miRNAs to participate in HCC progression. Using starBase V3.0 [20, 21], 16 candidate miRNAs were identified. However, only miR-34a-5p was inversely correlated with LINC01123 expression in HCC tissues from the TCGA database (Supplementary Figure 4) and has previously been reported to be a tumor suppressor in HCC [22]. Our data also showed an inverse correlation between LINC01123 and miR-34a-5p in HCC tissues (r=-0.5887, P<0.0001, Figure 5A). Interestingly, miR-34a-5p level was negatively regulated by LINC01123 in Hep3B and Huh7 cells (P<0.05, Figure 5B). Next, the dual-luciferase reporter assay and the RIP assay were performed to confirm whether miR-34a-5p is sponged by LINC01123. As expected, miR-34a-5p mimics markedly reduced luciferase activity of the luciferase reporter vector carrying WT-LINC01123 but not MT-LINC01123 (P<0.05, Figure 5C). Furthermore, enriched LINC01123 and miR-34a-5p were detected in the Ago2 pellet compared to the IgG group (P<0.05, Figure 5D). Thus, these data indicated that miR-34a-5p was the target of LINC01123 in HCC cells. 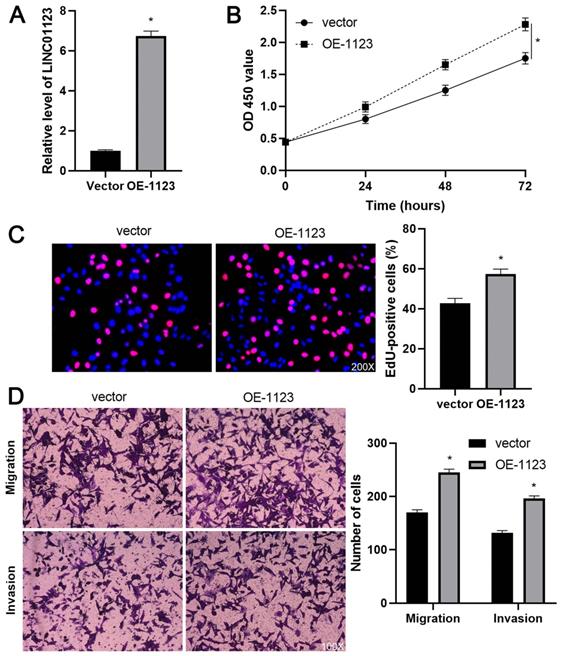 The aberrantly expressed lncRNAs, which act as diagnostic markers, prognostic indicators or predictors of therapeutic response, have been reported in various types of cancer including HCC [23, 24]. For instance, the identification of tumor-specific transcripts (TSTs), which contain many noncoding RNAs and are detectable in extracellular vesicles from HCC patients' blood, may provide new insights into the development of HCC diagnosis [25]. Our previous studies have identified MCM3AP-AS1 and A1BG-AS1 as potential biomarkers for predicting the prognosis of HCC [7, 11]. In this study, we found LINC01123 expression to be clearly upregulated in HCC tissues. Furthermore, the elevated expression of LINC01123 was correlated with poor prognostic features and reduced OS in HCC patients. Univariate and multivariate analysis revealed that LINC01123 level was an independent predictor of OS in HCC patients. Thus, LINC01123 might predict clinical outcomes in HCC patients. 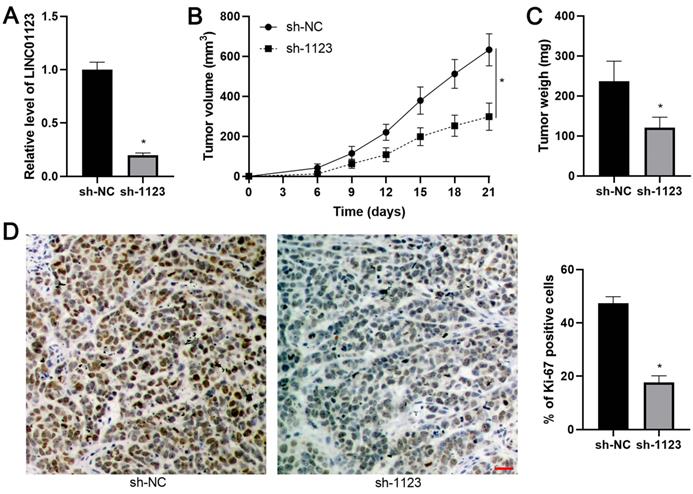 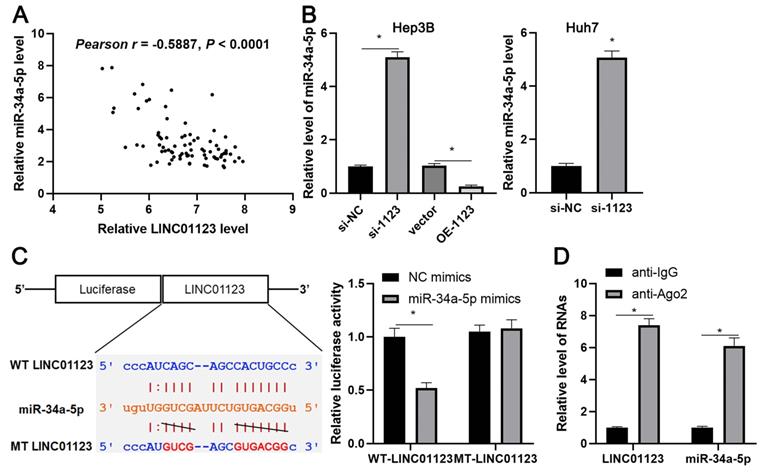 LINC01123 positively regulated TUFT1 by targeting miR-34a-5p in HCC cells. (A) The expression of TUFT1 mRNA was negatively correlated with miR-34a-5p level in HCC tissues. (B) miR-34a-5p overexpression clearly decreased the luciferase activity of vector containing 3'UTR of TUFT1. However, MT-miR-34a-5p did not affect the luciferase activity of vector carrying 3'UTR of TUFT1. (C) Rescue experiment of TUFT1 protein expression by cotransfection of corresponding vectors in Hep3B cells. (D) The expression of TUFT1 mRNA was positively correlated with LINC01123 level in HCC tissues. *P<0.05. 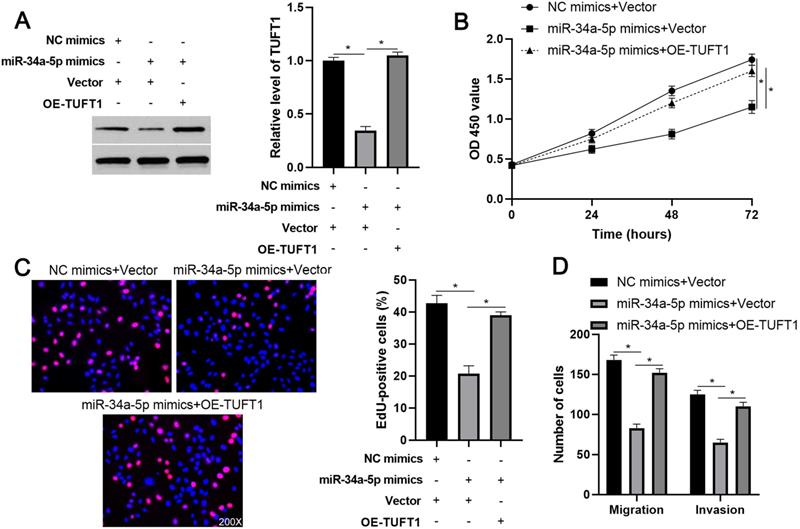 Since a previous study has verified that LINC01123 functions as a molecular sponge for miR-199a-5p in NSCLC [14], miR-34a-5p was screened as a potential target of LINC01123 using an online platform. miR-34a-5p has been recognized as a tumor suppressor in HCC. Yang P et al. demonstrated that miR-34a-5p expression is reduced in HBV-positive HCC, and its suppression facilitates tumor growth and metastasis by enhancing the expression of C-C motif chemokine ligand 22 (CCL22) [22]. miR-34a-5p suppresses the migratory and invasive capacities of HCC cells by attenuating c-Met [29]. Furthermore, miR-34a-5p overexpression represses the proliferation and induces apoptosis of HCC cells by targeting histone deacetylase 1 (HDAC1) [30]. A recent study demonstrates that knockdown of miR-34c-3p inhibited the lactate production, glucose consumption, extracellular acidification rate (ECAR), and aggressive proliferation in HCC cells [31]. Previous studies have reported that miR-34a-5p is sponged by lncRNA CCAT2 and lncRNA-MUT [32, 33]. The current study revealed that LINC01123 negatively regulates miR-34a-5p level in HCC cells and is inversely correlated with miR-34a-5p expression in HCC tissues. The luciferase reporter assay and the RIP assay further confirmed that miR-34a-5p is the target of LINC01123. Our previous study first identified TUFT1 as a novel oncogene in HCC [17]. Moreover, TUFT1 contributes to HCC growth and metastasis by activating Ca2+/PI3K/AKT signaling [17]. We showed that TUFT1 was a novel target of miR-34a-5p in HCC. Importantly, TUFT1 restoration abrogated miR-34a-5p-induced suppressive effects on HCC cell proliferation, migration and invasion.

In conclusion, we found that LINC01123 is an oncogene in HCC. The upregulated expression of LINC01123 in HCC tissues may potentially predict poor prognosis. LINC01123 accelerated HCC cell proliferation, migration and invasion by sponging miR-34a-5p and enhancing TUFT1 expression. This study may provide new insight into the pathogenesis of HCC.