Rationale: Compelling evidence suggests that Lgr5+ hepatocytes repair liver damage by promoting the regeneration of hepatocytes and ductal cells in the case of liver injury. The PTEN-mediated AKT/β-catenin signaling plays a key role in the regulation of innate immune regulation in the liver. However, the signaling pathways that control Lgr5+ hepatocyte proliferation in the liver remain unclear.

Methods: In order to assess the involvement of PTEN-mediated AKT/β-catenin signaling in the expansion of Lgr5+ hepatocytes upon liver injuries, the Lgr5-CreER; Rosa-mTmG lineage tracing system was used to target Lgr5+ hepatocytes.

Conclusion: The outcomes can improve the application potential of Lgr5+ hepatocytes in the treatment of liver injury diseases and provide a new treatment option for liver cancer.

The target gene of Wnt signaling, Lgr5, has been shown to be a tissue stem cell marker for maintaining organ homeostasis, including the small intestine [1-8], colon [9-15], antral stomach [15-18], hair follicles [19, 20], mammary gland [21, 22], and ovary [23]. Using canonical lineage analysis system and bacterial artificial chromosome (BAC)- transgenic model with a high labeling efficiency, Lgr5 has also been documented on a unique subset of damaged induced hepatocytes [24, 25]. In the liver, Lgr5+ hepatocytes are an important cell population that contributes to the maintenance of liver homeostasis and damage repair and are mainly distributed around the central vein [24, 26]. Lgr5+ hepatocytes are long-lived, maintaining their own lineage and long-term presence in homeostasis and liver injury [24]. When the liver suffers an injury by CCl4, 3,5-diethoxycarbonyl-1,4-dihydrocollidine (DDC), and other toxic substances, Lgr5+ hepatocytes that possess the potential of bidirectional differentiation can differentiate into hepatocytes and bile duct cells [25]. At present, in vitro culture systems that generate liver organoid from isolated mouse Lgr5+ hepatocytes have been established [25], and long-term culture and large-scale amplification of liver organoids have also been achieved [27].

The exact mechanism by which damage induces Lgr5+ hepatocyte proliferation remains a mystery. Since Lgr5 plays an important role in enhancing the activity of Wnt/β-catenin signaling pathway, high-intensity Wnt signaling after a liver injury is likely to indicate Lgr5+ hepatocyte proliferation to repair a damaged liver. PTEN negatively regulates the PI3K-AKT signaling pathway, an essential pathway for the regulation of cell survival and proliferation [28, 29], which consequently leads to nuclear translocation of β-catenin through phosphorylation of GSK-3β [30]. PTEN-mediated AKT/β-catenin signaling controls inflammatory damage in mouse liver triggered by ischemia/reperfusion injury and regulates the release of inflammatory cytokines in the liver [31]. Meanwhile, PTEN regulates NK cells and Kupffer cells in the liver to modulate the proliferation of hepatocytes to promote liver repair [32]. However, the role of PTEN in Lgr5+ hepatocytes mediated liver regeneration remains to be explored.

Previous studies on lineage tracing of Lgr5+ hepatocytes for 18 months revealed that only a few cloned cells (1-5 cells) were produced by a single Lgr5+ hepatocyte, indicating a low level of Lgr5+ cell division during homeostasis [24, 26]. Moreover, the lineage tracing of Lgr5+ hepatocytes using traditional LGR5-IRES-creERT2 reporter mice showed that Lgr5 expression was not detected in healthy liver, but only in bile duct after injury [25], suggesting that Lgr5+ hepatocyte proliferation may be a stress response to the liver repair. In this study, we attempted to determine whether altering PTEN-mediated AKT signaling in Lgr5+ hepatocytes would affect Lgr5+ cell proliferation. Lgr5CreER; mTmG mice were crossed with PTENflox/flox mice to generate Lgr5CreER; mTmG; PTENflox/flox mice (Figure S1). Tamoxifen was injected for five consecutive days to specifically knock out PTEN in Lgr5+ hepatocytes to activate AKT signaling and simultaneously trace Lgr5+ hepatocytes (Figure 1A). Tamoxifen administration resulted in permanent membrane GFP expression (mGFP+) within Lgr5-expressing cells. Twenty-one days after injection, we were surprised to find an increased distribution of mGFP-labeled cells in the liver (Figure 1C and 2B, Figure S2A-E) and that these mGFP-labeled cells colocalized with Albumin (a marker of hepatocytes) (Figure 1F). Immunostaining for phosphorylated AKT (p-AKT) also showed significant AKT signaling activation in mGFP-labeled cells (Figure 1H). While in Lgr5CreER; mTmG control mice, we only found sporadic mGFP-labeled cells (Figure 1B and 2B, Figure S2F-H). These data suggested that the activated AKT signaling promoted the expansion of Lgr5+ hepatocytes. To test the efficacy of tamoxifen, we also observed the tracking of Lgr5+ cells in the colon, intestine, and hair follicles. After five days of injection, hair follicle stem cells expressing Lgr5, as well as stem cells in the colon and intestinal crypts and their progenies, were all labeled with mGFP and showed high labeling efficiency (Figure S4A-E). As previously reported [24], the traditional tracing system of Lgr5CreER; mTmG mice could not obtain the high tracing efficiency of the novel BAC transgenic mice since the traditional tracing system cannot mimic the true expression pattern of Lgr5 at mRNA levels in the liver [25]. 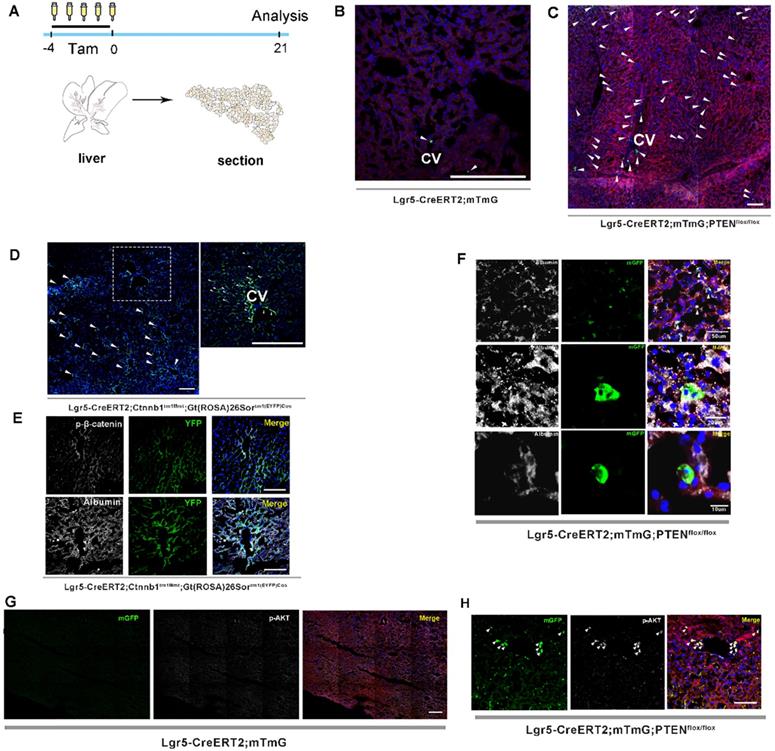 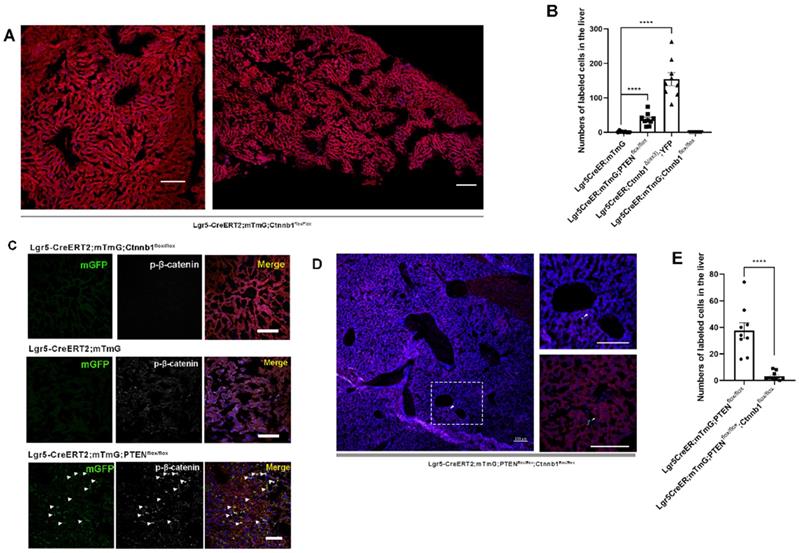 Mice were bred and maintained at the Shenzhen Center for Disease Control and Prevention in accordance with their guidelines. All mice were placed in SPF-class housing of the laboratory. Lgr5-GFP-Cre-ERT2 (Lgr5CreER) (stock no. 008875) and ROSA26-mTmG (R26-mTmG) (stock no. 007576) strains were obtained from the Jackson Laboratory. Ctnnb1flox/flox mice were a gift from Dr. Zhenge Luo (Institute of Neuroscience, CAS). Ctnnb1tm1Mmt; Gt(ROSA)26Sortm1(EYFP)Cos mice were gifted by Dr. Fang Liang (South University of Science and Technology). PTENflox/flox mice were gifted from Dr. Hong Wu (University of California, Los Angeles). Lgr5CreER transgenic mice were crossed with R26-mTmG reporter mice to generate Lgr5CreER; mTmG mice. To inactivate β-catenin and PTEN activity in Lgr5+ cells, Lgr5CreER; mTmG mice were bred together with the floxed homozygous mice. To perform lineage tracing and simultaneously activate β-catenin activity in Lgr5+ hepatocytes, Lgr5CreER mice were mated to Ctnnb1tm1Mmt; Gt(ROSA)26Sortm1(EYFP)Cos mice. Mice of both genders were randomly selected for all lineage tracing experiments with equal gender ratios. All experiments were conducted using 8-week-old mice. All procedures were approved by the Animal Ethics Committee of Shenzhen Center for Disease Control and Prevention.

Genotyping of mice was performed using the One-Step Mouse Genotyping Kit (Vazyme Biotech co., Ltd). After a 3 mm mouse tail was cut into pieces, freshly prepared 200 µL 1x lysis buffer was added to it. The tails were incubated in a 55 °C water bath for 20 min after vortex oscillation. Then, the samples were placed in a 95 °C water bath for 5 min to inactivate Proteinase K. After the vortex oscillation of the pyrolysis products, centrifugation was performed at 12,000 rpm for 5 min at 4 °C, and the supernatant was collected for PCR reaction. Refer to the Jackson Laboratory's website for detailed reaction conditions and primers (http://jaxmice.jax.org/strain/).

Intraperitoneal injection of 167 mg/kg tamoxifen (Sigma, 16.7 mg/mL in corn oil) was performed every 24 h to activate the CreER recombinase in mice. To perform lineage tracing, 8-week-old Lgr5CreER; mTmG mice were given intraperitoneal injections with tamoxifen for five consecutive days, and liver samples were collected for observation 21 days post-injection. 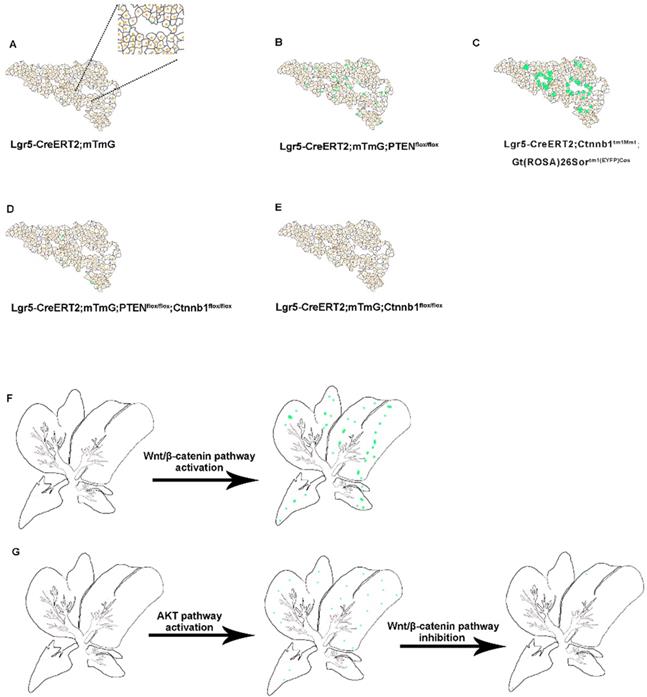 Liver samples were fixed overnight with 4% PFA, washed with PBS for 8 h, and immersed in 30% sucrose for 8 h before embedding in OCT. The frozen liver was sectioned at 10 mm by a microtome (Leica). The slices were placed at room temperature for 30 min and then soaked in PBS for 10 min. Sections were blocked with block solution at 37 °C for 60 min and then incubated with primary antibody solution overnight. Primary antibodies used were: phospho-β-catenin (Cell Signaling, 5651, 1:100), phosphor-AKT (Cell Signaling, 4060, 1:200), Albumin (Proteintech, 16475-1-AP, 1:50). The sections were washed with PBS for three times, followed by incubation with secondary antibody (Jackon ImmunoResearch, 111-605-003, 1:200) at 37 °C for 60 min, and washed with PBS for three times. DAPI was added to the samples to incubate the cells in the dark for 15 min at room temperature. All images were acquired on a Zeiss confocal microscopy.

GraphPad Prism software was used for statistical analysis. Statistical significance was determined by unpaired Student's t-test. All results are expressed as means ± SEM, and n = 3 for each genotype. The proliferation rate of Lgr5+ hepatocytes was quantitated in whole-mount sections from the mice with different genotypes by counting mGFP- or YFP-labeled cells in the liver (three liver slices per biological replicate). The area of each section being counted is approximately 1,000 µm × 1,000 µm.