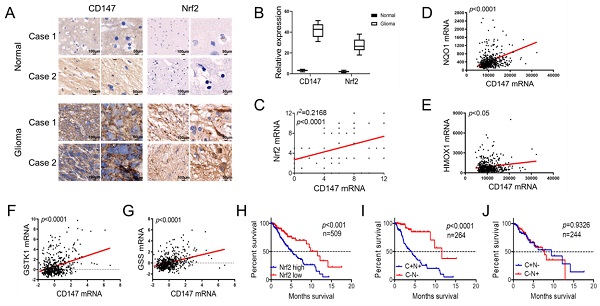 Background: Drug resistance is one of the biggest challenges in cancer therapy. temozolomide (TMZ) represents the most important chemotherapeutic option for glioma treatment. However, the therapeutic efficacy of TMZ remains very limited due to its frequent resistance in glioma, and the underlying mechanisms were not fully addressed. Herein, we demonstrate that the elevated expression of CD147 contributes to TMZ resistance in glioma cells, potentially through the post-translational regulation of Nrf2 expression.

Results: Based on the analysis of clinical glioma tissues, CD147 is highly expressed in glioma tissues and positively associated with tumor malignancy. Suppression of CD147 expression increased the inhibitory effect of TMZ on cell survival in both U251 and T98G cells, whereas the gain of CD147 function blocked TMZ-induced ROS production and cell death. Mechanistic study indicates that CD147 inhibited GSK3β/β-TrCP-dependent Nrf2 degradation by promoting Akt activation, and subsequently increased Nrf2-mediated anti-oxidant gene expressions. Supporting the biological significance, the reciprocal relationship between CD147 and Nrf2 was observed in glioma tissues, and associated with patient outcome.

Conclusions: Our data provide the first evidence that glioma resistance to TMZ is potentially due to the activation of CD147/Nrf2 axis. CD147 promotes Nrf2 stability through the suppression of GSK3β/β-TrCP dependent Nrf2 protein degradation, which results in the ablation of TMZ induced ROS production. As such, we point out that targeting CD147/Nrf2 axis may provide a new strategy for the treatment of TMZ resistant gliomas.