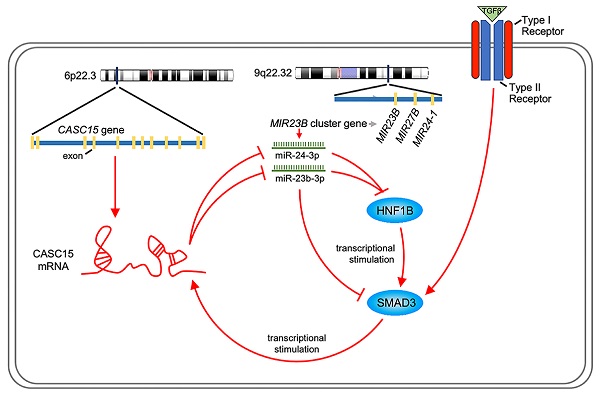 Cancer Susceptibility Candidate 15 (CASC15), which is a newly identified long noncoding RNA crucial for epigenetic regulation in human tumors, was found to be associated with poor prognosis of the patients with ovarian cancer by utilizing The Cancer Genome Atlas and Gene Expression Omnibus database. Therefore, the purpose of this paper was to explore the functional role and latent molecular mechanism of CASC15 in the progression of ovarian cancer. In vitro and in vivo experiments validated CASC15 as an oncogenic lncRNA in ovarian cancer, which could enhance metastasis through TGF-β-induced epithelial-mesenchymal transition progress. MiR-23b-3p and miR-24-3p, which are members of the miR-23b cluster, were identified to directly target CASC15 through luciferase assays. Further mechanistic investigations indicated that CASC15-mediated miR-23b-3p/miR-24-3p sequestration cooperatively upregulated SMAD3 expression, which, in turn, would permit increased CASC15 mRNA level as a transcription activation factor. This study first described a miR-23b-3p/miR-24-3p-mediated positive feedback loop between CASC15 and SMAD3, which may reflect the underlying molecular mechanism of CASC15's oncogenic function in ovarian cancer.