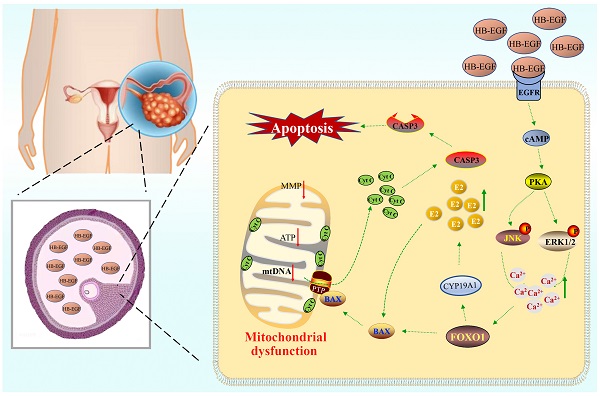 Polycystic ovarian syndrome (PCOS) is one of the most prevalent endocrinopathies and the leading cause of anovulatory infertility, but its pathogenesis remains elusive. Although HB-EGF is involved in ovarian cancer progression, there is still no clarity about its relevance with PCOS. The present study exhibited that abundant HB-EGF was noted in follicular fluid from PCOS women, where it might induce the granulosa cells (GCs) production of more estrogen via the elevation of CYP19A1 expression after binding to EGFR. Furthermore, HB-EGF transduced intracellular downstream cAMP-PKA signaling to promote the phosphorylation of JNK and ERK whose blockage impeded the induction of HB-EGF on estrogen secretion. Meanwhile, HB-EGF enhanced the accumulation of intracellular Ca2+ whose chelation by BAPTA-AM abrogated the stimulation of HB-EGF on FOXO1 along with an obvious diminishment for estrogen production. cAMP-PKA-JNK/ERK-Ca2+ pathway played an important role in the crosstalk between HB-EGF and FOXO1. Treatment of GCs with HB-EGF resulted in mitochondrial dysfunction as evinced by the reduction of ATP content, mtDNA copy number and mitochondrial membrane potential. Additionally, HB-EGF facilitated the opening of mitochondrial permeability transition pore via targeting BAX and raised the release of cytochrome C from mitochondria into the cytosol to trigger the apoptosis of GCs, but this effectiveness was counteracted by estrogen receptor antagonist. Collectively, HB-EGF might induce mitochondrial dysfunction and GCs apoptosis through advancing estrogen hypersecretion dependent on cAMP-PKA-JNK/ERK-Ca2+-FOXO1 pathway and act as a promising therapeutic target for PCOS.