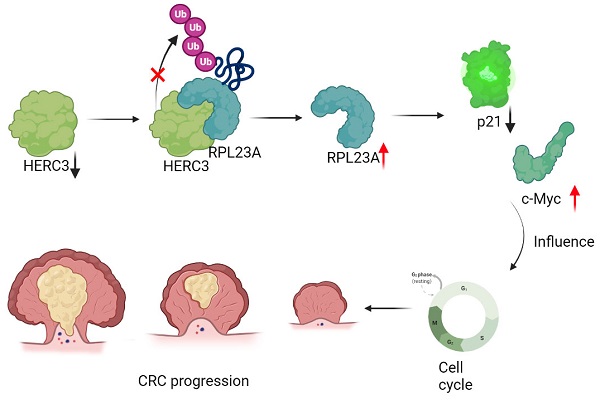 Aims: Colorectal cancer (CRC) has high mortality and morbidity rates; however, the mechanism of CRC cells uncontrolled proliferation is unclarified, E3 ligases are widely reported to have crucial functions in cancers. HERC3 was once recognized as an important role in CRC, however its effects on CRC cell proliferation and cell cycle are blank.

Methods: Correlation between HERC3 and clinical characteristics was analyzed. Coimmunoprecipitation, mass spectrometry analysis and GST-pull down were performed to identify interacting-proteins of HERC3. Expression pattern of RPL23A and its correlation between HERC3 was researched via qRT-PCR, western blot and immunohistochemistry. In vivo and vitro gain-and loss-of-function assays and rescue experiments concentrating HERC3-RPL23A axis in terms of cell proliferation and cell cycle were conducted. The ubiquitination regulatory mechanism between HERC3 and RPL23A were identified via vivo ubiquitylation assays, cycloheximide analysis and mass spectrometry analysis. GSEA aided to research the potential functional mechanism of RPL23A and validated by western blot and in vivo ubiquitylation assays.

Results: HERC3 expression decreased gradually from colorectal tissues in healthy individuals to adjacent-tumors normal tissue in CRC patients, and to tumor tissues and HERC3 could inhibit CRC cell proliferation and arrest cells in the G0-G1 phase. RPL23A which was recognized as one potential target of HERC3 was identified to be overexpressed in CRC and could serve as a prognostic biomarker in CRC. RPL23A could also independently regulate the cell cycle and cell proliferation and attenuate the influence of HERC3 on CRC. In addition, HERC3 directly interacted with RPL23A and served as an E3 ligase to ubiquitination degrade RPL23A via K48-dependant manner through the HECT domain. Furthermore, HERC3 could regulate the ubiquitination of p21 and further modulate protein expression of c-Myc and p21 via regulating RPL23A.