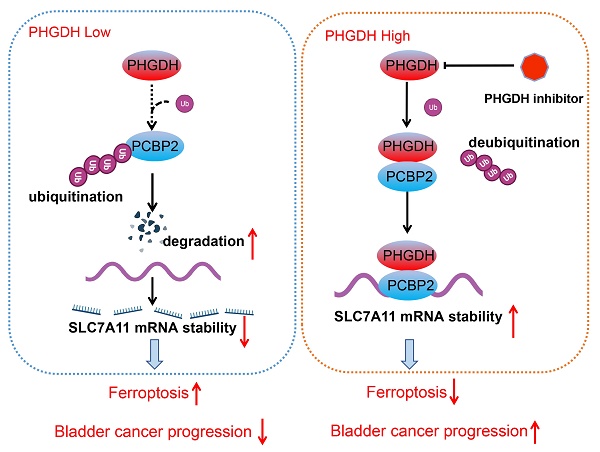 Background: Bladder cancer (BCa) is a prevalent urologic malignancy that shows a poor prognosis. Abnormal metabolism and its key genes play a critical role in BCa progression. In this study, the role played by PhosphoGlycerol Dehydrogenase (PHGDH), an important molecule of serine metabolism, was investigated with regard to the regulation of ferroptosis in BCa.

Methods: The BCa tissues of 90 patients were analyzed by RNA-sequencing for differential pathways and genes. Western blot, qPCR, and IHC were used to determine PHGDH expression in the cell lines (in vitro) and patient tissues (in vivo). R software was used to analyze PHGDH expression, prognosis, and PHGDH+SLC7A11 score. The biological functions of PHGDH were examined through organoids, and in vitro and in vivo experiments. C11 probes, electron microscopy, and ferroptosis inhibitors/ inducers were used to detect cellular ferroptosis levels. Protein profiling, co-IP, and RIP assays were used to screen proteins that might bind to PHGDH. PHGDH-targeted inhibitor NCT-502 was used to evaluate its effect on BCa cells.

Results: PHGDH was highly expressed in patients with BCa. Knock-down of PHGDH promoted ferroptosis, while the decreased proliferation of BCa cells. Additionally, PHGDH knock-down downregulated the expression of SLC7A11. Co-IP and mass spectrometry experiments indicate that PHGDH binds to PCBP2, an RNA-binding protein, and inhibits its ubiquitination degradation. PCBP2 in turn stabilizes SLC7A11 mRNA and increases its expression. NCT-502, a PHGDH inhibitor, promotes ferroptosis and inhibits tumor progression in BCa. The PHGDH+ SLC7A11 score was significantly correlated with patient prognosis.

Conclusions: To conclude, the PHGDH, via interaction with PCBP2, upregulates SLC7A11 expression. This inhibits ferroptosis and promotes the malignant progression of BCA. The results of this study indicated that NCT-502 could serve as a therapeutic strategy for BCa.