Our previous studies revealed that leukocyte infiltration could trigger breast and prostate tumor invasion through physical disruption of tumor capsules. Our current study, involving multiple types of human tumors, further suggests that leukocyte infiltration also triggers metastasis through the following pathways : 1) the physical movement into the epithelium disrupts inter-cellular junctions and surface adhesion molecules, which cause the disassociation of tumor cells from tumor cores, 2) some of these tumor cells subsequently form tight junctions with the plasma membranes of leukocytes creating tumor cell-leukocyte chimeras (TLCs), and 3) the leukocytes of TLCs impart migratory capacity to associated tumor cell partners. Our findings suggest a novel pathway for tumor cell dissemination from primary sites and journey to new sites.

The epithelium, which is the origin of over 85% of breast malignancies, is physically separated from the stroma by the myoepithelial cell layer and basement membrane [1]. The epithelium is normally devoid of lymphatic ducts and blood vessels, and thus, totally relies on the stroma for its essential needs. The epithelial cells are normally held in place by intercellular junctions and surface adhesion molecules [2]. Due to these structural relationships, the disruption of these structures is a pre-requisite for tumor invasion into the stroma, which is believed to be a multistage process, progressing sequentially from normal to hyperplasia, to in situ, and to invasive stages [3]. Progression from an in situ to invasive stage is believed to be triggered by overproduction of proteolytic enzymes primarily by cancer cells [4,5]. Tumor metastasis is also believed to be a multistage process, requiring the tumor cells to dissociate from the primary site, enter the circulation, migrate to distant sites, and proliferate (6). The mechanism of tumor metastasis, however, remains as a subject of debate.

Recently, there has been a great deal of interest in the role of immune cells in tumor invasion and metastasis, and several models, including paracrine loop signaling, tumor-educated macrophages, immune cell-based mediation, and cancer cell-leukocyte fusion [7-11], have been proposed to explain how immune cells could facilitate metastasis. Collectively, these models suggest that immune cells facilitate tumor invasion and metastasis through the following mechanisms: (1) macrophages enhance tumor cell migration through secretion of chemotactic and chemokinetic factors, which promote angiogenesis and fibrillogenesis, allowing tumor cells track along collagen fibers to blood vessels [7,8], (2) T-lymphocytes indirectly promote invasion and metastasis by directly regulating the phenotype and effector function of tumor associated CD11b(+)Gr1(-)F4/80(+) macrophages [9,10], and (3) macrophages ingest tumor cells, resulting in the fusion of genetic materials of two cell types that creates a hybrid phenotype [11]. Each of these models is supported by laboratory findings or clinical data, suggesting that metastasis is likely to occur through multiple mechanisms. However, it is not currently possible to discern the mechanistic origin of a given metastatic lesion. In addition, two critical issues remain: (1) how metastasis-initiating cells are disseminated from their primary sites, and (2) how disseminated tumor cells escape from the immune-surveillance during their journey to new sites. More importantly, the specific molecule and unique morphological feature of pending or early metastatic lesions remain elusive, making it difficult for early detection and intervention of tumor metastasis.

Our more recent studies have further shown that aberrant leukocyte infiltration may also represent a trigger factor for tumor metastasis through the pathways depicted in Fig 1.

This hypothesis fundamentally differs from existing theories of tumor metastasis [7-11]. Based on this hypothesis, leukocytes (mainly T-lymphocytes) could directly trigger tumor invasion and metastasis through three correlated pathways: (1) physical disruptions of the inter-cellular junctions and surface adhesion molecules, causing tumor cell dissociation from primary sites, (2) formation of tight junctions with the plasma membrane of tumor cells, allowing leukocytes to physically drag their partners to distant sites during their migration, and (3) formation of tight junctions with the plasma membranes of mitotic cells, interfering with the cell division process. Our recent studies with confocal microscope have confirmed the tight plasma membrane junctions between leukocytes and tumor cells [17]. The mechanism for the formation of tight membrane junctions between leukocytes and tumor cells is unknown, but may involve the formation of microvesicles by the tumor cells. Microvesicles released from the membranes of tumor cells contain proteins that may act as self-epitopes [18,19], which stimulate production of corresponding auto-antibodies, or activate a subset of leukocytes. Prior to their release, these microvesicles are small particles embedded within the tumor cell plasma membrane, and could potentially function as receptors for the leukocytes, leading to the formation of TLCs [18, 19]. It is also possible that these dissociated tumor cells may belong to a population of tumor stem cells, which has unique expression of plasma membrane-related proteins that function as receptors for the leukocytes.

This hypothesis presents a unique explanation for the initial dissemination of tumor cells from their primary sites and their subsequent journey to new sites. If confirmed, it could have several significant implications. Scientifically, it could lead to a new direction to acquire more effective approaches for detection, intervention, and prevention of invasion and metastasis. Clinically, it may have a number of beneficial applications, including: (1) double immunostaining to assess the extent of focal myoepithelial cell layer disruptions and leukocyte infiltration of in situ tumors may facilitate differentiation between those at high or low risk to progress, (2) a quantitative assessment of myoepithelial cell degeneration-related molecules, or the number of leukocyte subtypes preferentially associated with degeneration-related changes in blood samples may be used as a screen tool to indentify the individuals at a greater risk to develop invasive or metastatic lesions, and (3) the development of therapeutic agents to target the specific leukocyte subtypes that are physically associated with epithelial cells may provide a more effective means to treat and prevent tumor invasion and metastasis. In addition, this hypothesis may be applicable to all epithelium-derived tumors, as leukocytes are widely distributed in abundance in almost all human tissues. 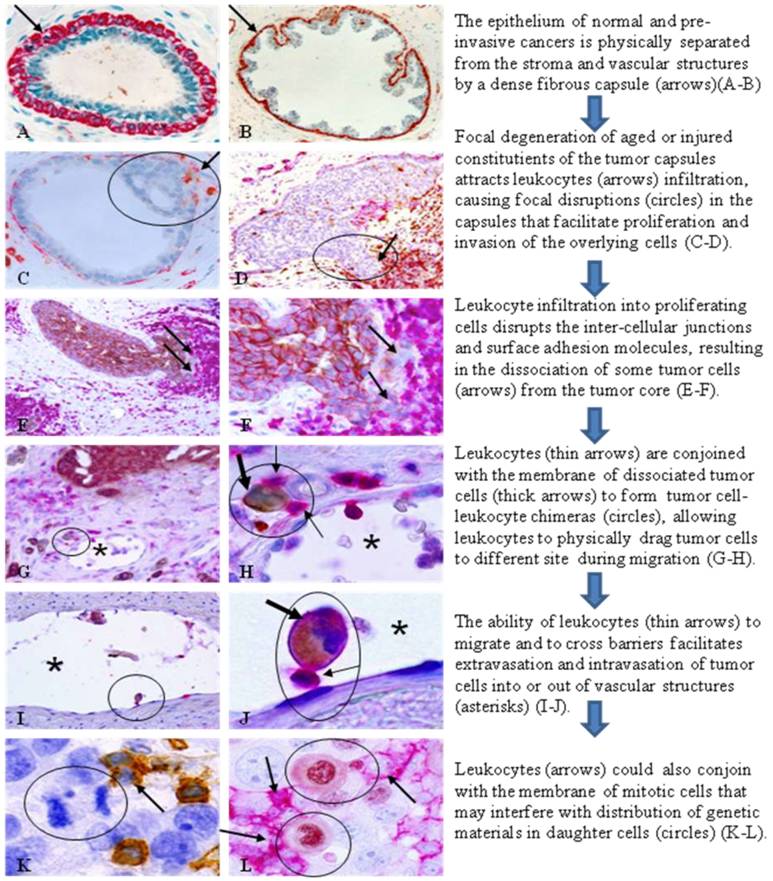 This study was supported in part by grants DAMD17-01-1-0129, DAMD17-01-1-0130, PC051308 from Congressionally Directed Medical Research Programs, grant BCTR0706983 from The Susan G. Komen Breast Cancer Foundation, and grant 2008-02 from The US Military Cancer Institute and Henry M. Jackson Foundation, and by grant 2006CB910505 from The Ministry of Chinese Science and Technology Department.

The author has declared that no conflict of interest exists.