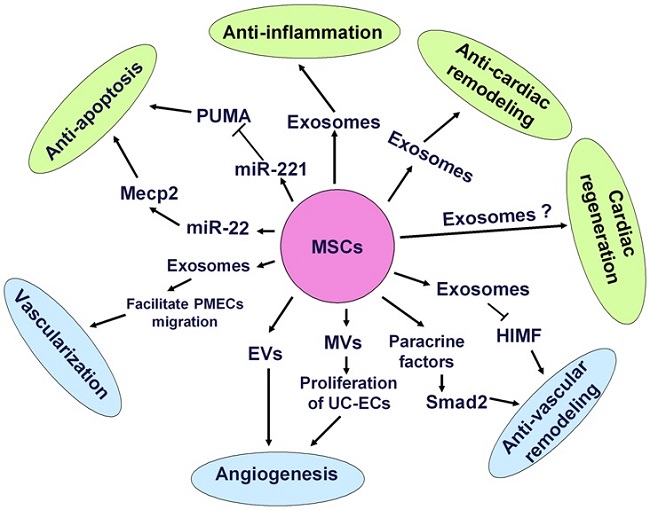 Cardiovascular diseases (CVDs) are still a major cause of people deaths worldwide, and mesenchymal stem cells (MSCs) transplantation holds great promise due to its capacity to differentiate into cardiovascular cells and secrete protective cytokines, which presents an important mechanism of MSCs therapy for CVDs. Although the capability of MSCs to differentiate into cardiomyocytes (CMCs), endothelial cells (ECs) and vascular smooth muscle cells (VSMCs) has been well recognized in massive previous experiments both in vitro and in vivo, low survival rate of transplanted MSCs in recipient hearts suggests that therapeutic effects of MSCs transplantation might be also correlated with other underlying mechanisms. Notably, recent studies uncovered that MSCs were able to secret cholesterol-rich, phospholipid exosomes which were enriched with microRNAs (miRNAs). The released exosomes from MSCs acted on hearts and vessels, and then exerted anti-apoptosis, cardiac regeneration, anti-cardiac remodeling, anti-inflammatory effects, neovascularization and anti-vascular remodeling, which are considered as novel molecular mechanisms of therapeutic potential of MSCs transplantation. Here we summarized recent advances about the role of exosomes in MSCs therapy for CVDs, and discussed exosomes as a novel approach in the treatment of CVDs in the future.