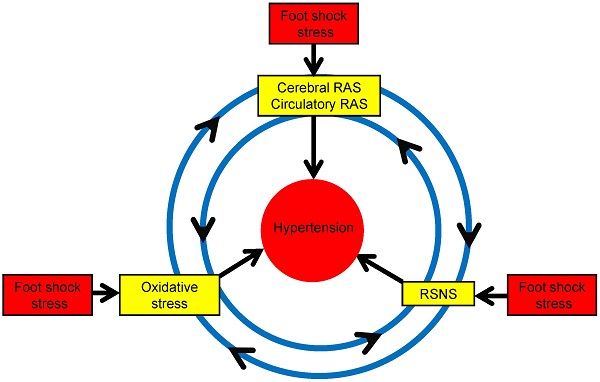 Objective: The renin-angiotensin system (RAS) and renal sympathetic nerve system (RSNS) are involved in the development of hypertension. The present study is designed to explore the possible roles of the RAS and the RSNS in foot shock-induced hypertension.

Results: The two week foot shock treatment significantly increased systolic blood pressure, which was accompanied by an increase in angiotensinogen, renin, ACE1, and AT1a mRNA and protein expression in the cerebral cortex and hypothalamus, an increase of the plasma concentrations of renin, Ang II, corticosterone, and TBARS, as well as a decrease in plasma SOD and GSH-Px activities. Systolic blood pressure increase was suppressed by denervation of the RSNS or treatment with Captopril or Tempol. Interestingly, denervation or Tempol treatment both decreased main RAS components not only in the circulatory system, but also in the central nervous system. In addition, decreased antioxidant levels and increased TBARS and corticosterone levels were also partially restored by denervation or treatment with Tempol or Captopril.