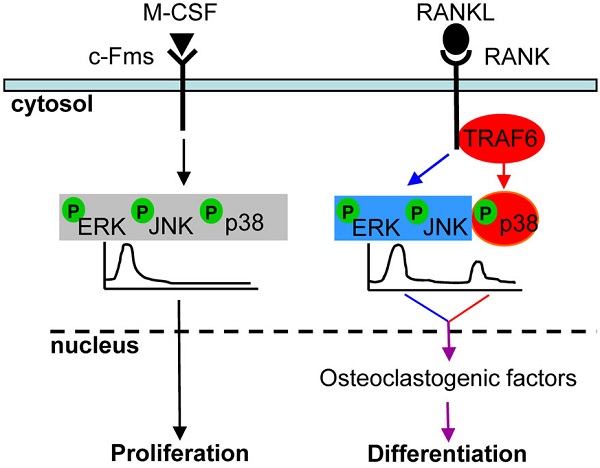 Different stimuli often activate the same intracellular signaling molecules but trigger distinct cell responses. We explored whether or not MAPK signaling induced by macrophage colony-stimulating factor (M-CSF), which is responsible for osteoclast proliferation, differs from that induced by receptor activator of NF-κB ligand (RANKL), which is essential for inducing osteoclast differentiation. The activation of MAPKs by M-CSF or RANKL differed in terms of the extent and duration of ERK, p38, and JNK phosphorylation as well as the isoform specificity of JNK phosphorylation. In particular, RANKL induced a second wave of MAPK activation coincident with the onset of osteoclast differentiation, whereas M-CSF triggered only a monophasic response. M-CSF was also able to trigger a full MAPK response on restimulation of cells earlier than was RANKL, representing that MAPK resensitization by M-CSF differs from that by RANKL. Furthermore, the adapter protein TRAF6 recruitment to the cytoplasmic tail of RANK in a submembrane compartment is specifically required for RANKL-induced activation of p38 MAPK, expression of osteoclastogenic transcription factors, and osteoclast differentiation, indicating that the switch from proliferation to differentiation in osteoclast precursors is dependent on p38 activation via the RANKL-RANK-TRAF6 axis. Our results suggest that selective control of MAPK signaling induced by M-CSF and by RANKL mediates the proliferation versus differentiation decision in osteoclast precursors.