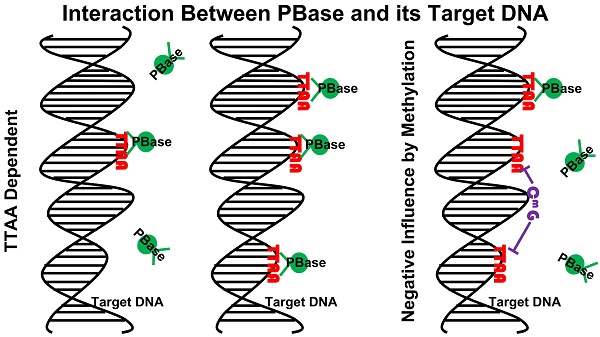 Transposons and retroviruses are important pathogenic agents and tools for mutagenesis and transgenesis. Insertion target selection is a key feature for a given transposon or retrovirus. The piggyBac (PB) transposon is highly active in mice and human cells, which has a much better genome-wide distribution compared to the retrovirus and P-element. However, the underlying reason is not clear. Utilizing a tagged functional PB transposase (PBase), we were able to conduct genome-wide profiling for PBase binding sites in the mouse genome. We have shown that PBase binding mainly depends on the distribution of the tetranucleotide TTAA, which is not affected by the presence of PB DNA. Furthermore, PBase binding is negatively influenced by the methylation of CG sites in the genome. Analysis of a large collection of PB insertions in mice has revealed an insertion profile similar to the PBase binding profile. Interestingly, this profile is not correlated with transcriptional active genes in the genome or transcriptionally active regions within a transcriptional unit. This differs from what has been previously shown for P-element and retroviruses insertions. Our study provides an explanation for PB's genome-wide insertion distribution and also suggests that PB target selection relies on a new mechanism independent of active transcription and open chromatin structure.

Insertion profiles are key feature of transposons and retroviruses which can aid in increasing our understanding of pathogenesis and in developing tools for mutagenesis and transgenesis. It has been reported that both transposons and retroviruses preferably insert into transcriptionally active genes, which may be due to the higher accessibility of open chromatin and/or the interaction between transposase/integrase and cellular proteins bound to transcriptionally active regions (1-6). The distribution of P-element insertions in the Drosophila melanogaster genome exhibits high preference for transcriptionally active regions, and especially for the regions near the transcriptional start site (7, 8). A similar preference has been also reported for retroviruses including human immunodeficiency virus (HIV), avian sarcoma-leukosis virus (ASLV), and murine leukaemia virus (MLV) (2, 3, 9-13). It has been shown that transcriptional co-activators bound to HIV integration complexes serve as a tether for insertion targeting (14-17).

The piggyBac (PB) transposon has been shown to be highly active in mice and human cells (18), making it an ideal tool for a variety of genetic manipulations in mammals and human cells (18-28). In fact PB has many advantageous features including having the highest transposition efficiency compared to other DNA transposons (29, 30), being active in broad cell types and species from insects to mammalians (18-20, 31-36), capable of carrying a large cargo (23), and precise excision without leaving damage footprints (18, 37, 38). PB appears to have a preference for transcriptional units (18, 21, 22), suggesting that it could also have a mechanism similar to P-element and retroviruses that target transcriptionally active genes. On the other hand, PB has a significantly broader genome-wide distribution than other transposons and retroviruses (30, 39, 40), arguing that it may employ a different mechanism in target selection.

To better understand the genomic profile of PB insertion site selection, we have tagged the PB transposase (PBase) and examined PBase binding preference in the mouse genome using the Chromatin Immunoprecipitation (ChIP)-Chip method (41, 42) which is a high-throughput method used to identify the interaction between genomic DNA and the protein of interest in the living cells. We have analyzed the PBase binding distribution in the genome in relation to the distribution of PB's target sequence TTAA, the distribution of transcriptional units, gene expression levels, and the distribution of CG methylation. Our analysis has revealed that unlike P-element and retroviruses, PBase binding does not prefer transcriptional active units, but rather mainly depends on the distribution of TTAA sites with a negative influence by CG methylation. This unique mechanism provides an explanation for the behavior of PB's genome-wide insertion profile and broad activities in different species and cell types. 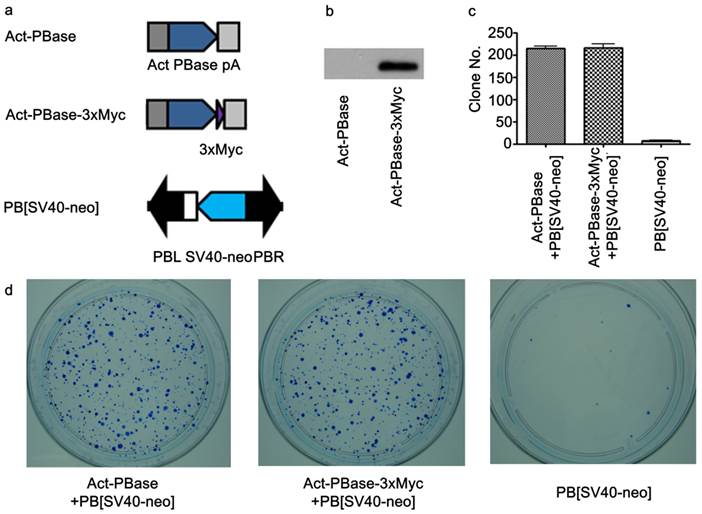 To investigate interactions between PBase and the mouse genomic DNA, we applied the ChIP-Chip method using the Affymetrix® Chromatin Immunoprecipitation Assay Protocol (P/N 702238). 3×Myc-tag were added to the C-terminal of PBase (Figure 1a). This Myc tagged PBase was shown to be (Figure 1b) and able to catalyze PB transposition in W4/129S6 mouse ES cell (Taconic) genome with the same efficiency as wild-type PBase (Figure 1c, 1d). 15μg Myc antibody (SC-789X, Santa Cruz) was used to immunoprecipitate the PBase-DNA complex. The Affymetrix® GeneChip® Mouse Tiling 2.0R Array Set (P/N 900852) was then used to identify PBase binding sites. To check whether the PB transposon had an effect on PBase binding, we mapped the PBase binding sites in ES cells with and without the presence of the PB transposon designated as PB+ or PB-, respectively. For experiments with each group, 2 replicates were performed. Using the peak finding algorithm (43, 44), we defined PBase binding sites across the whole mouse genome. These sites displayed similar distribution patterns in all the analyses carried out for this study. We did not detect any effect of the PB transposon on the distribution of the PBase binding sites in our study. We then aggregate all the sites and identified a total of 2,396,017 PBase binding sites across the mouse genome (Table S1).

TTAA is highly enriched at the center of PBase binding sites

For those peaks located within 25bp of TTAA sites, 51.21% (306471) were from the PB- group, while 49.79% (303934) were from PB+ group. There was no significant difference between the distribution of binding sites from PB+ and PB- group relative to TTAA sites (χ2 analysis, p =0.8714) (Figure 2b). These data indicated that even without the presence of PB transposon, PBase already has the ability to bind TTAA sites. 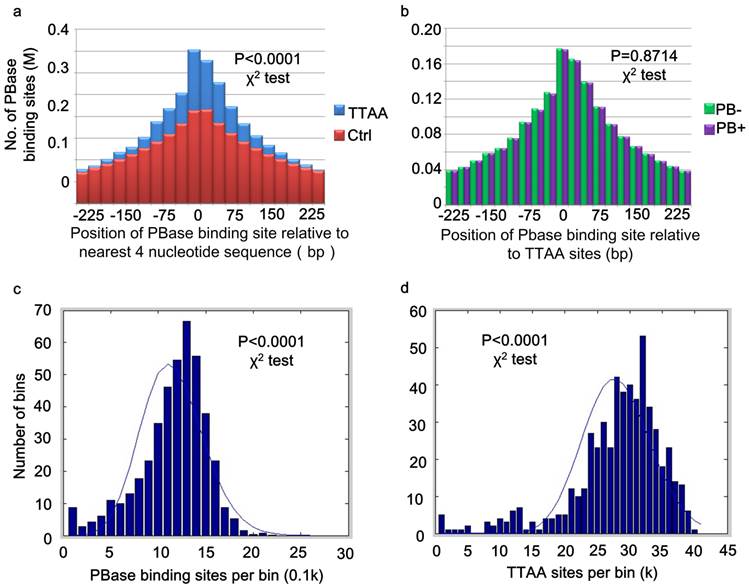 PBase binding site distribution follows that of TTAA sites in the genome, but not gene density or transcriptional activity levels

Global analysis of PBase binding sites showed that the sites spread universally across the whole mouse genome, but are not strictly randomly (Poisson) distributed (χ2 analysis, p < 0.0001) (Figure 2c). This might be partially due to the non-random distribution of TTAA sites in the mouse genome (χ2 analysis, p<0.0001) (Figure 2d). The distribution of PB insertion sites during large-scale mutagenesis in the D. melanogaster genome is also not random (8). We found that TTAA sites are also not randomly distributed in the D. melanogaster genome either (χ2 analysis, p < 0.0001). 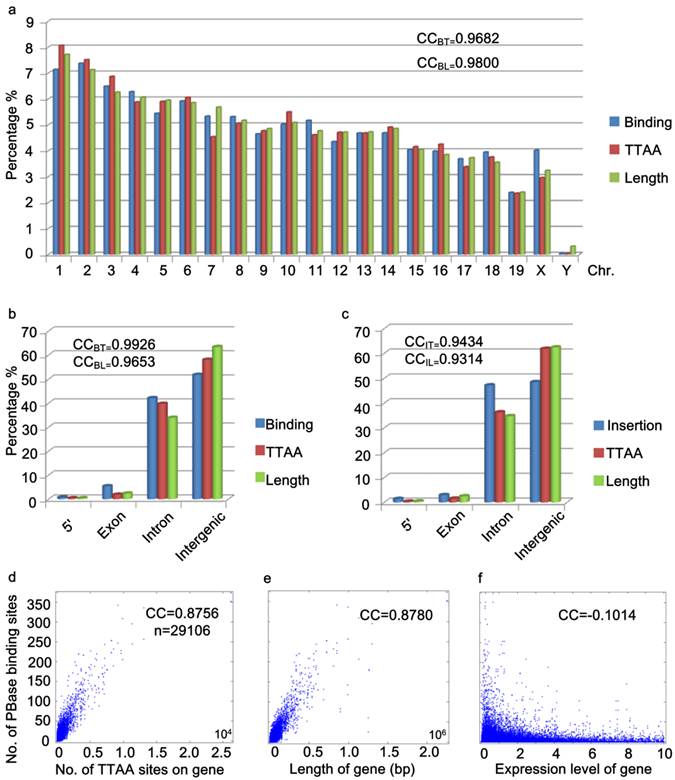 The strong 5' preference of P-element and retrovirus insertion has been attributed to the accessibility of the open chromatin regions that correlate with transcriptional activity (4, 9). Our data for PB suggest that PB does not rely on transcriptional activity. We thus checked whether transcription levels affect PBase binding in the mouse genome. We obtained the microarray expression data of 29106 transcripts from the mouse ES cells (47). No correlation between the expression level of the transcripts and the density of PBase binding sites were detected (CC = - 0.1014) (Figure 3f). On the other hand, a strong correlation between the number of TTAA sites in a gene (or the length of a gene) and the density of PBase binding sites on a gene was detected (CC = 0.8756 / 0.8780) (Figure 3d, 3e). Together these results indicate that PBase binding would largely depends on the TTAA sites rather than a region's transcriptional activity status.

Distribution of PBase Binding Is influenced by Methylation of CpG 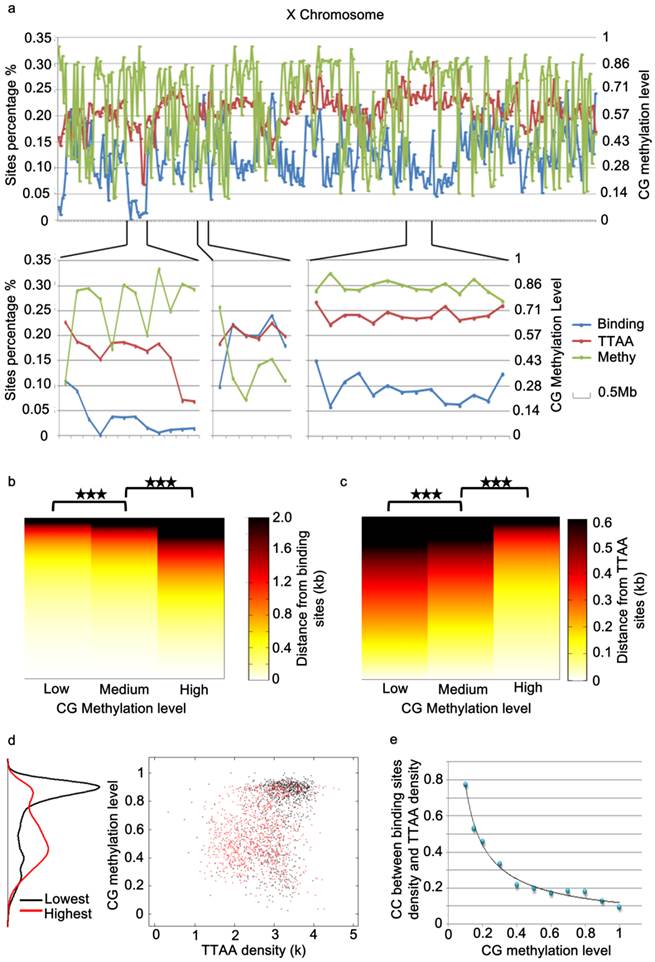 We also detected a negative influence of genomic methylation on PB's target selection, which is similar to the previous finding that the methylation of PB transposon DNA itself inhibits transposition (19). Therefore, methylation could be a mechanism that silences PB. While this feature could affect PB mutagenesis for somatic cells or in tissue culture cells, its germline mutagenesis capacity should not be affected as the genome of the germ line cells is largely unmethylated (48).

In summary, PB's distinctive and transcription-independent target selection profile suggests a transposition mechanism different from retroviruses and P-element. Future studies exploring the interaction between the transposases and host factors could provide molecular mechanisms that contribute to this difference.

Construction of Act-PBase-3×Myc was as follows: the coding sequence of 3×Myc was PCR amplified from pIND-3×Myc with primer1 (5'-TCAACGAAAGTACCGGTAAACC-3') and primer2 (5'-ATAGTATAGCGGCCGCCTTGTACTCGGAAACAA-3') , and cloned into the Not I and Age I sites of Act-PBase (18) to generate Act-PBase-3×Myc.

W4/129S6 mouse ES cells (Taconic) were used for the ChIP-chip assay to detect PBase binding sites in the mouse genome in this study. The conditions for culture and electroporation of ES cells were described in the manufacturer-recommended protocols (Taconic). 30μg circular Act-PBase-3×Myc in PB- group or 30μg Act-PBase-3×Myc plus 5μg PB[SV40-neo](18) in PB+ group were used for electroporation of 107 cells. After electroporation, cells were seeded onto 10 cm dish containing mitomycin C-treated mouse embryonic fibroblast feeder cells, ES cells were then harvested for ChIP after a 48h incubation period.

20μg circular PB[SV40-neo] and 10μg Act-PBase-3×Myc (or Act-PBase) were used for electroporation. Geneticin (G418) was added into each dish at the final concentration of 500μg/ml for selection neo resistant clones after 48h incubation. The medium was changed every day with geneticin. After 7 days selection, cells were fixed with PBS containing 4% paraformaldehyde for 10 minutes and then stained with 0.2% methylene blue for an hour. Cell clones were counted after washing with deionized water.

ES cells were harvested and crosslinked with 1% formaldehyde 48h after transfection. Sonication was performed with Sonics® VC 130 Vibra cellTM at 35 amplitude, 30 seconds pulses with 1 minute rest, 10 cycles to shear the DNA to 100-1000 bp fragments. Both pulsing and resting steps were performed in an ice bath. ChIP-chip experiments were performed according to Affymetrix® Chromatin Immunoprecipitation Assay Protocol (P/N 702238). A total of 108 ES cells were used per immunopreicipitation (IP) with the use of 15μg anti-Myc antibody (SC-789X, Santa Cruz). GeneChip® Mouse Tiling 2.0R Array Set (P/N 900852), a whole mouse genome tiling array was used for the DNA analysis.

The CHIP-chip data was first normalized using the quantile normalization. Then the peak finding algorithm (43) was applied to identify PBase binding sites. There are two main steps in this algorithm: First, identification of the binding region. Candidate binding regions should satisfy the following thresholds: (i) should contain at least 4 probes with significantly higher signal intensity than the background; and (ii) The distance between each neighboring probe with significantly higher signal in the region should be no more than 500bp. Second, identification of candidate binding sites from the binding region. For each binding region identified in the previous step, a double standard linear regression was performed which fits neighboring signals to asymmetric triangles centered on candidate binding sites. In total, we defined 2396017 PBase binding sites in the whole mouse genome (Table S1). This program was implemented using the Java programming language.

We thank Drs. Xiaohui Wu, Wufan Tao, Rener Xu, Min Han and Yuan Zhuang for discussion and comments. We also acknowledge Mr. Xu Yang, Dr. Lei Yao, Mr. Kunlin Liu and Dr. Xinran Dong for the help with perl scripts. Ms. Boyin Tan is acknowledged for the help in ES cell culture. We want to give special thanks to Prof. Beibei Ying for the encouragement and support. This work is supported by Chinese Key Projects for Basic Research (973) (Grant No.2006CB806700), Hi-tech Research and Development Project (863) (Grant No. 2007AA022012).

31. Handler AM. Use of the piggyBac transposon for germ-line transformation of insects. Insect biochemistry and molecular biology. 2002;32(10):1211-20

36. Park TS, Han JY. piggyBac transposition into primordial germ cells is an efficient tool for transgenesis in chickens. Proceedings of the National Academy of Sciences of the United States of America. 2012;109(24):9337-41

38. Elick TA, Bauser CA, Fraser MJ. Excision of the piggyBac transposable element in vitro is a precise event that is enhanced by the expression of its encoded transposase. Genetica. 1996;98(1):33-41