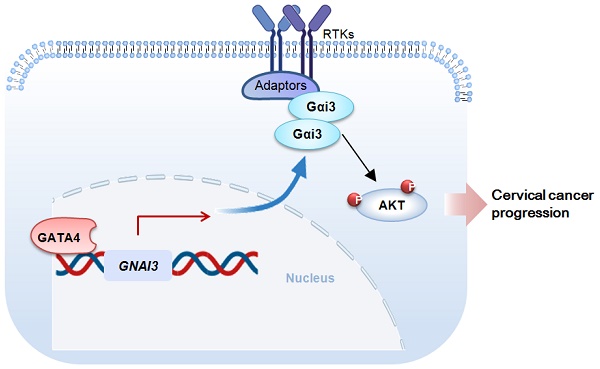 Cervical cancer seriously threatens women's health globally [1, 2]. The number of cases in developing countries accounts for over 85% of the world. Although the screening (mainly HPV screening) of cervical cancer has been relatively complete [1, 2], and the surgical techniques, radiotherapy equipment, and chemotherapy have been gradually improved, the clinical treatment of advanced and recurrent cervical cancer is still unsatisfactory, and the prognosis is still poor [3-5]. The chemotherapy response for advanced cervical cancer is between 20% and 36%, and the survival time is less than one year [3-5]. Although significant achievements have been made in cervical cancer therapy, the overall survival/prognosis for recurrent and metastatic patients is extremely poor [3, 4].

Molecularly-targeted agents, including the anti-angiogenic drugs, immuno-suppressants and EGFR blockers, are being tested for advanced cervical cancer [6, 7]. Bevacizumab combined with chemotherapy were shown to improve overall survival in certain advanced cervical cancer patients [6, 8-10]. However, for many advanced cancers, the novel targeted therapies are still in urgent need [11-14].

The antibodies were reported early [20]. LY294002 together other chemicals/reagents were provided by Sigma (St. Louis, Mo).

The fresh cervical cancer tissues or the paracancerous epithelial tissues were first digested. The digested human cells were washed, centrifuged, and incubated in complete medium with penicillin/streptomycin and DNase (500 U). Cell suspensions were thereafter filtered, centrifuged, and resuspended. The primary cancer cells or cervical epithelial cells were cultivated in described medium [27] with minor modifications. Here, the primary human cervical cancer cells (“priCC-1” and “priCC-2”) and the primary human cervical epithelial cells (“priCEpi-1” and “priCEpi-2”), derived from same two primary patients, were obtained. The immortalized cervical cancer cell lines, Caski and HeLa229, were provided by the Cell Bank of Institute of Biological Science of CAS (Shanghai, China). The protocols of this study were approved from the Ethics Committee of Soochow University and were according to the principles of Helsinki declaration.

The human tissues, including cervical cancer tissues and matched paracancerous normal cervical tissues, were obtained from a total of twenty patients who were administrated at the Affiliated Hospitals of Soochow University. Each single patient provided the written-informed consent. The patients' information was listed in Table 1. All cancers are squamous cell carcinomas. Tissue slides were subject to immunohistochemistry (IHC) staining (using the described protocols [16]).

The lentiviral constructs encoding the GATA4 shRNA or the GATA4-expressing sequence, as well as their relative control constructs, were reported in our previous study [28]. The constructs were individually and stably transduced to the primary human cervical cancer cells. Expression of GATA4 was always tested.

The information of the cervical cancer patients

“NA” stands for not available.

Next, TCGA results were analyzed and the differentially expressed gene (DEGs) were retrieved to examine co-expression genes with Gαi3 in cervical cancer tissues. The volcanic map of Gαi3-assocaited DEGs is shown in Figure 1H (|LogFC|>1, Adjust P-value < 0.05). KEGG pathway analysis (Figure 1I) found that Gαi3-associated DEGs were enriched in different oncogenic cascades including extracellular matrix (ECM) receptor interaction, renal cell cancer (RCC), pancreatic cancer, basal transcription factors and bladders (Figure 1I). These results implied that Gαi3-associated DEGs could be involved in carcinogenesis and cancer progression. Together, these bioinformatics results show that Gαi3 overexpression in cervical cancer is correlated with poor overall survival. 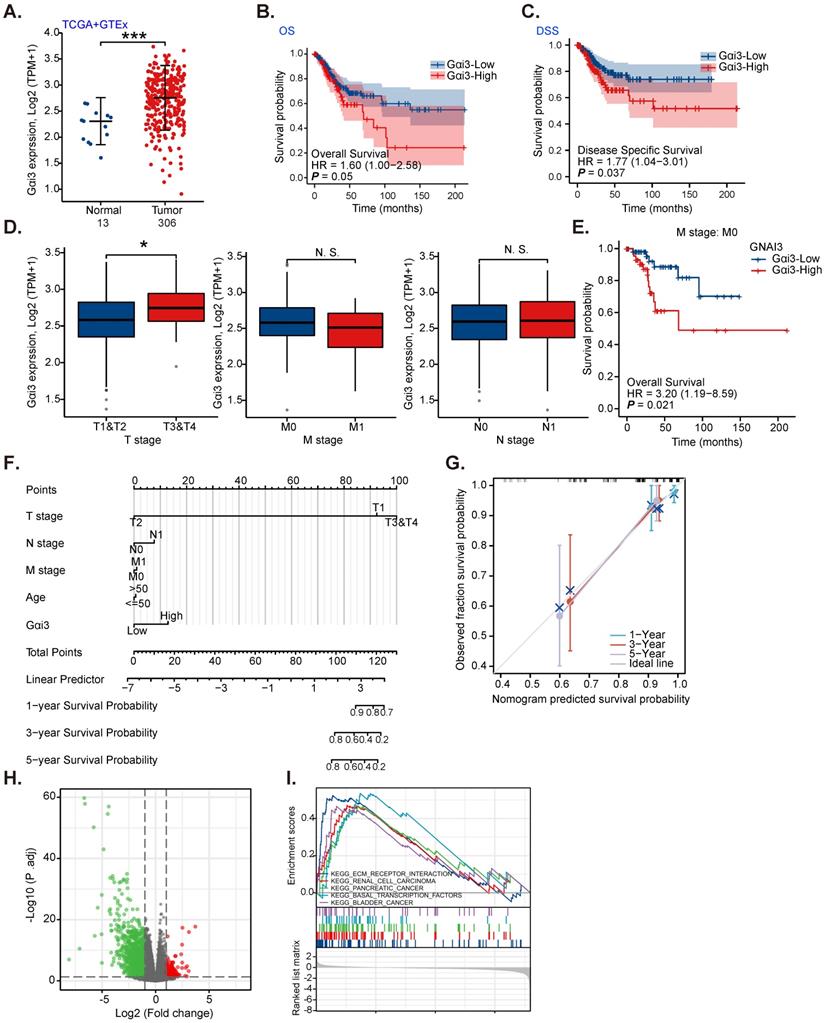 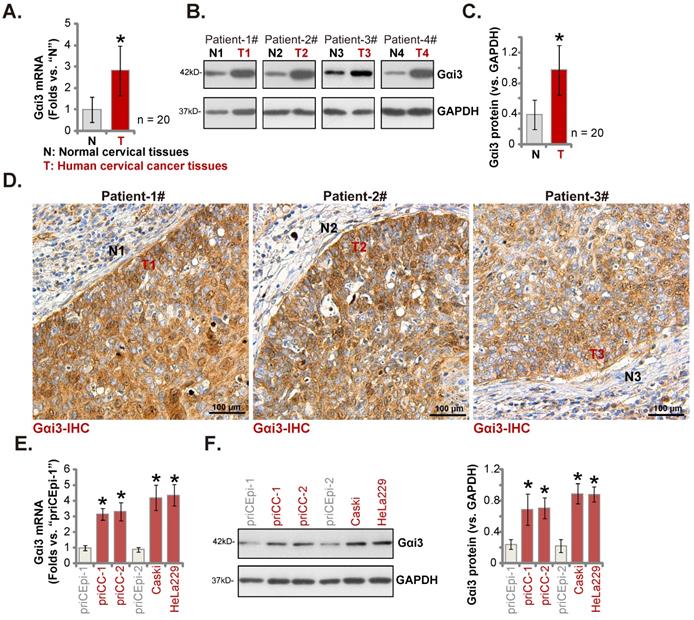 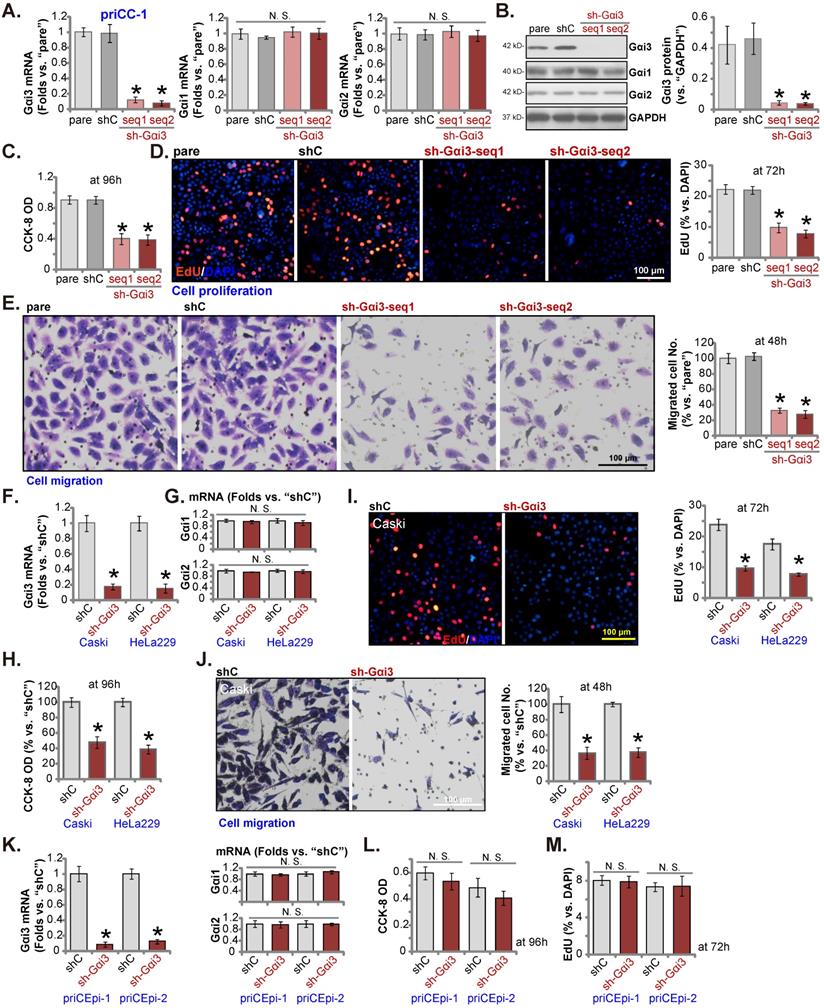 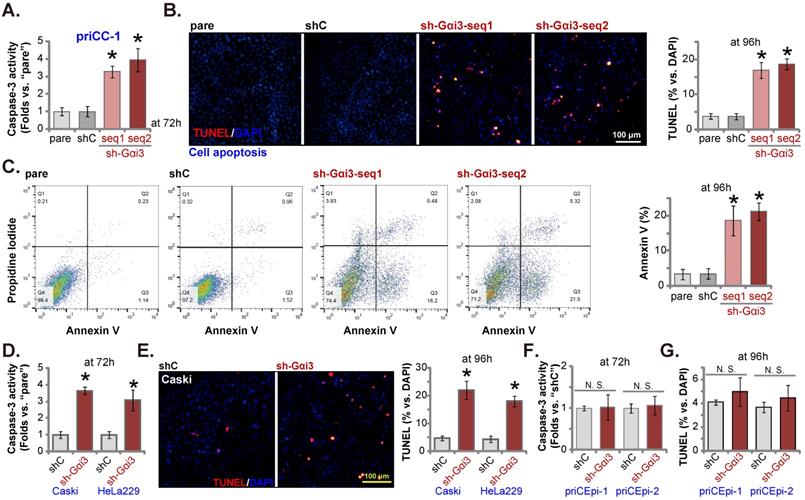 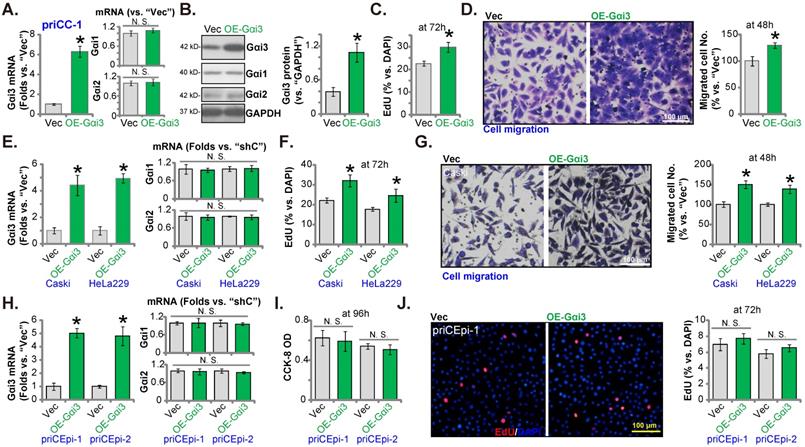 Gαi3 is important for Akt-mTOR activation in cervical cancer cells

GATA4 is important for Gαi3 expression in cervical cancer cells

Our group [28] and others have supported that GATA4 is one important transcription factor for Gαi3 [33]. We therefore analyzed whether GATA4 was the primary mechanism of Gαi3 overexpression in cervical cancer. GATA4 shRNA-expressing lentivirus [28] was stably transfected to primary human cervical cancer priCC-1 cells, resulting in robust GATA4 silencing (Figure 8A). GATA4 shRNA robustly decreased Gαi3 mRNA and protein (Figure 8A and B) expression in priCC-1 cells. Moreover, GATA4 shRNA inhibited priCC-1 cell proliferation and decreased EdU-incorporated nuclei ratio (Figure 8C).

Gαi3 is important for Akt-mTOR activation in cervical cancer cells. priCC-1 cells bearing the described genetic modifications were established and culture, and listed proteins in total cell lysates were measured (A-C). Akt-S6K phosphorylation was quantified (A-C). The sh-Gαi3-seq1-expressing priCC-1 cells were further stably transduced with a lentiviral constitutively-active Akt1 (caAkt1, S473D) construct or the empty vector (“Vec”), and expression of listed proteins was shown (D); Cells were further cultivated for 48-96h, cell proliferation, migration and apoptosis were examined by the described assays, and results were quantified (E-G). OE-Gαi3 priCC-1 cells were treated with LY294002 (5 µM) or 0.1% DMSO (“Veh”) for the designated hours, cell proliferation and migration were tested similarly and results were quantified (H and I). “pare” stands for the parental control cells. *P < 0.05 versus “pare”/“Cas9-C”/“Vec” group. # P < 0.05. “N. S.” means P > 0.05.

GATA4 is important for Gαi3 expression in cervical cancer cells. Expression of listed genes and proteins in primary priCC-1 cells with described GATA4 genetic modification was shown (A, B, D and E). Cells were further cultivated for 72h and cell proliferation was tested by measuring EdU-positive nuclei percentage (C and F). Chromosome IP (ChIP) revealed the relative amount of Gαi3 promoter DNA binding to GATA4 protein in the listed cervical cancer cells and epithelial cells (G) as well as in the listed human tissues of four representative patients (H). *P < 0.05 versus “shC”/“Vec”/“priCEpi-1 cells”/“N” tissues. 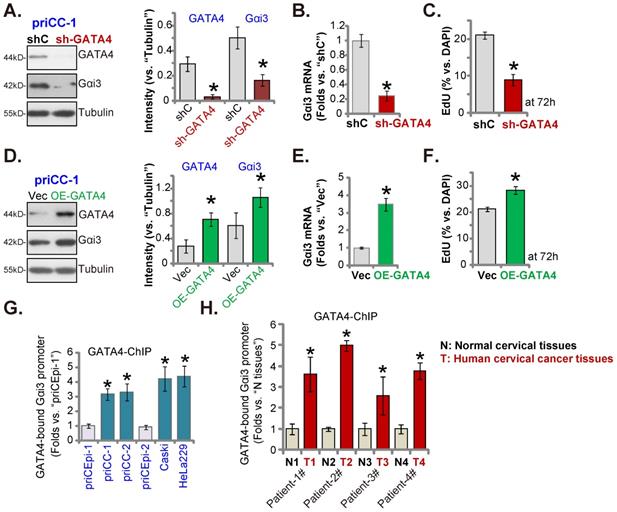 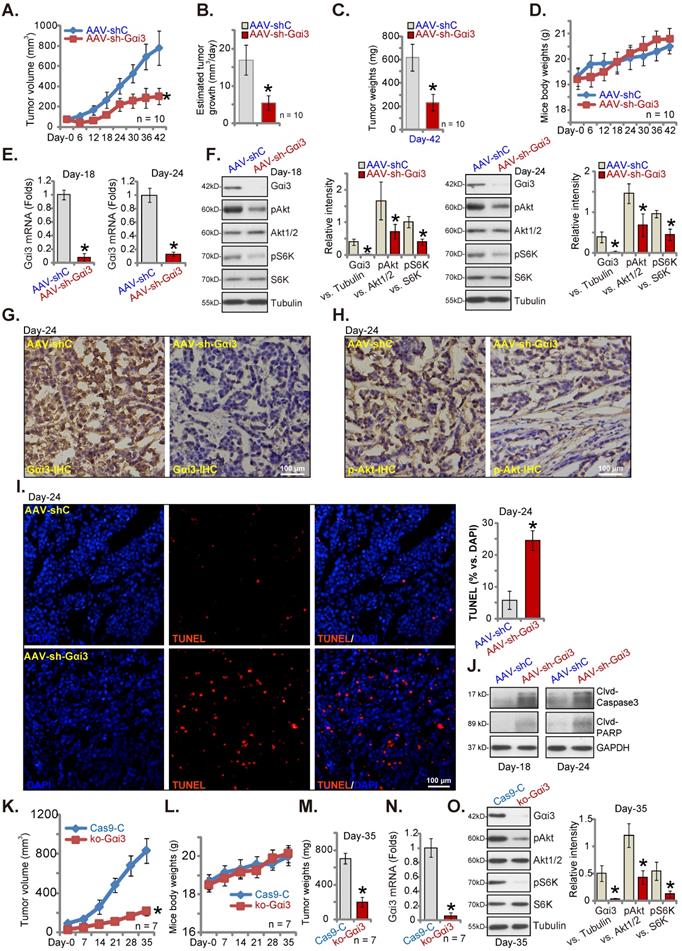 An early study using luciferase reporter assay and chromatin Immunoprecipitation (ChIP) demonstrated that the transcription factor GATA4 can directly bind to the promoter region of Gαi3 and regulate its transcriptional activity and expression [33]. The very recent study of our group has shown that GATA4 is an important transcription factor of Gαi3 in endothelial cells [28]. We further discovered that phosphoenolpyruvate carboxykinase 1 (PCK1) associated with phosphorylated GATA4, promoting Gαi3 transcription and expression in endothelial cells [28]. It will then lead to increased Akt-mTOR activation and pro-angiogenesis response [28]. Here in cervical cancer cells, Gαi3 was decreased following GATA4 shRNA, but was upregulated following GATA4 overexpression. Significantly, an increased binding between GATA4 and Gαi3 promoter region in both cervical cancer tissues and various cervical cancer cells was detected. These results implied that GATA4-mediated increased Gαi3 transcription could be a primary mechanism of Gαi3 upregulation in cervical cancer.

This work was generously supported by Key Research and Development Program of Jiangsu Province (No. BE2019652) and National Natural Science Foundation of China (81922025, 81802511, 81974388, 82171461, 81771457). A Project Funded by the Priority Academic Program Development of Jiangsu Higher Education Institutions. The authors declare that they have no competing interests. This study was approved by Ethics Committee of Soochow University. All institutional and national guidelines for the care were carefully followed.

Ethical Approval and Consent to participate

This study was approved by the Ethics Committee of Soochow University.

Availability of data and material

All data generated during this study are included in this published article. Data will be made available upon request.

All authors conceived the idea and designed the work, contributed to acquisition of data.